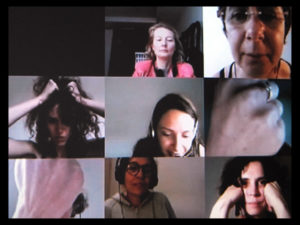 Annie Abrahams was born in the Netherlands and has been based in France since 1985. She holds a PhD in Biology from the University of Utrecht and is a graduate in fine arts from the Academie voor Beeldende Kunsten, Arnhem. Annie Abrahams’s work reflects on the idea of networking technologies as well as installations and performances in physical space. She engages on  the disentanglements in the entanglements in order to understand the nature of the third space as we progressively bury ourselves in.

In the article Trapped to Reveal, Annie Abrahams mentioned how in Sherry Turkle’s book Alone Together describes how as technology further evolves, we progressively hide behind technology more and more. The intimacy in communications become something we rather avoid than to look for. A perfect example of this would be the use of smartphones and the internet. It helps us flee from our fear of the other. However, it is suggested that social media such as Facebook teaches us how to simulate intimacy, to make relations easy and clean. Despite this, it contrasts to the last article we were assigned about false identity and what may seem real may be not necessarily the truth. Brad Troemel argues in the same lines of how

“The process of image management on Facebook is already less an outpouring of expression than it is an exercise in omission of information about one’s self”.

With this said, the relations made in the third space can become something superficial and everything we know may be nothing.

Annie Abrahams questions the state of happiness and how can we allow our true and honest self exist without masking. She expresses how we humans

“need to make space for the beast in the beauty, to go back to reality, to claim the human.”

This inspired her to create the project of ‘Angry Women’. Project Angry Women is a live performance broadcast carried out in 2012. It looks over the expression and behaviour of ‘Angry Women’ as well as time and space. 12 minutes long, 9 women are set in front of their webcams, connected via a common interface where they expressed their anger and irritations. This emotion-filled, melodramatic project was also conducted on females across the globe, breaking cultural barriers. Women participated expressed themselves through screams, cries and delusional laughter. It was latterly carried out with mixed genders. This project aimed to study the human behaviour, where we are the most vulnerable to reveal a side that we do not usually show. It reflects how we show less of our vulnerable yet true side, masking behind technology and putting the fake out there. Social media platforms became such a norm in this generation that it curate us to create a digital identity that portrays a ‘perfect’ life. We forget the human in us: the anger, the sadness, the fear; and display the positive traits to others where we are thought to be easily accepted. Thus, we shield away the negative traits and forge a fake digital identity. In contrast, Annie Abrahams embraces the negativity and the loss of human traits in us, exposing the inner frustration and anger of women.

Furthermore, Angry Women captures the concept of DIWO. The project could not be carried out alone nor without a team of participants from different backgrounds. Discussions and ideas on anger were exchanged in the perception of each individual and how it can influence the dynamics of others. This gives the audience and the artist herself a valuable study on human behaviour.

During the interview between Furtherfields and Annie Abrahams, Annie Abrahams mentions that her main aesthetic component would be human behaviour, hence calling her artworks “behavioural art”. She compares what she does now to what she did during her Biology studies. In both cases, she observes behaviour in constrained situations.

“The monkeys, that were the study objects became” humans and the cage the Internet.”

What struck me upon reading the interview was that, Annie Abrahams stated that when one participates in her performances means taking a risk.

“Nothing is rehearsed, means accepting, you can’t control everything. It means committing to continue even if all seems to go wrong, to be attentive to the others around you with whom you share the performance space, with whom you are co-responsible for the shared moment in time.”

This suggests that we should try to open up spaces and discussions with people who have other opinions other than yours, to go beyond safety-zones, to find ways to communicate with and about hatred, angst and love. Going against the norm of portraying our carefully curated digital identity and showing our true selves. Global telecommunications have challenged and penetrated all previous notions of the divide between public and private space, shaping a world that may be no longer ‘human’. However, after reading and absorbing all this information, are we really going to change for the better and stop curating our digital identity. Is the fear of being shamed to great due to the overly judgemental world we live in? Are we fearful of each other? Thus, acting the way in which we perceive we want to be but hiding the anger and frustration deep within us. Everyone’s got a side that we don’t show, even I do.