1.
“Omg have look at this, doesn’t this look so good!” “Stop your making me so hungry… but then again I only eat glazed donuts.“

2.
Dude, what if cinderella was a baking slave and her name was mozzarella?
….

3.
Damn I did so badly for this..ughs..what if I fail?
Its okay, just stay positive and everything will be fine!
Easy for you to say. 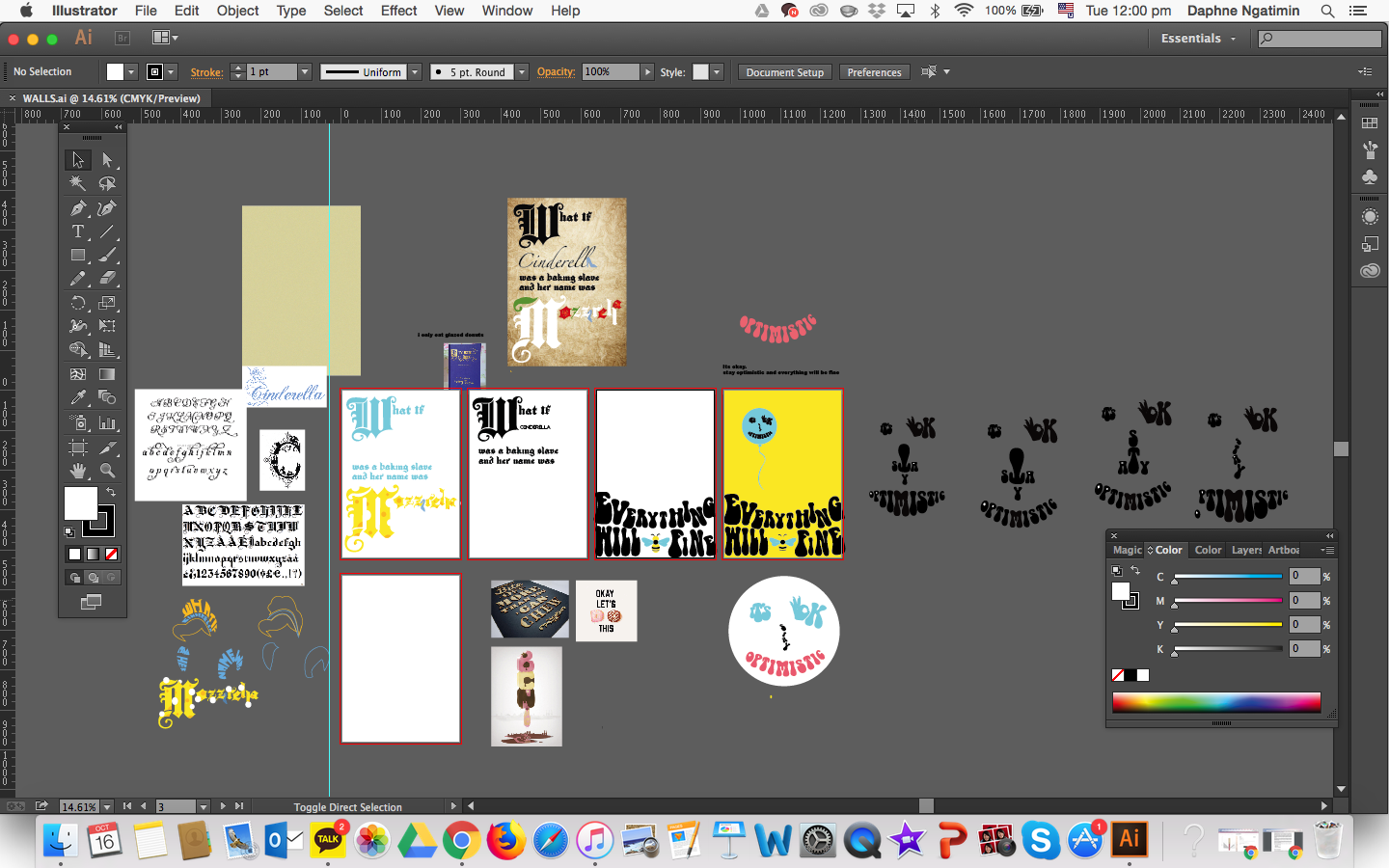 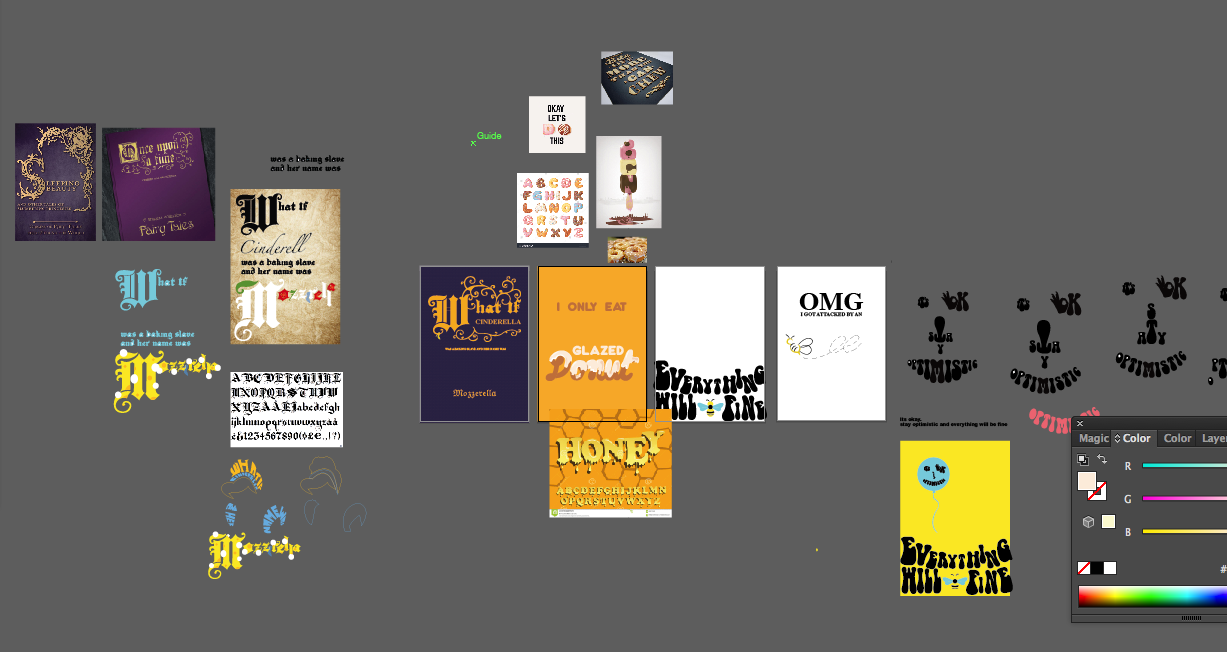 IDEA IN MIND
Quote 1: I only eat glazed donuts

Originally, I wanted to incorporate real donuts in the type but it did not work as a whole and with the overall color scheme. Thus, I used digital illustration to help me tie in everything together with the use of the same color palette. I wanted to emphasise the “glazed donut” thus keeping it traditional with the white glaze and the only one manipulated.

Quote 2: Dude, what if cinderella was a baking slave and her name was mozzarella?

This quote holds the element of a fairytale yet a pun. I wanted to play with the irony of “Once upon of time” where it conveys a magical transportation, even though it may be a fun pun or a joke. In the beginning, I wanted to portray the mozzarella with a cheesy touch but there were too many elements flying around. Thus, I decided to go with the classic Grimm’s fairytale book cover layout (like the reference below). 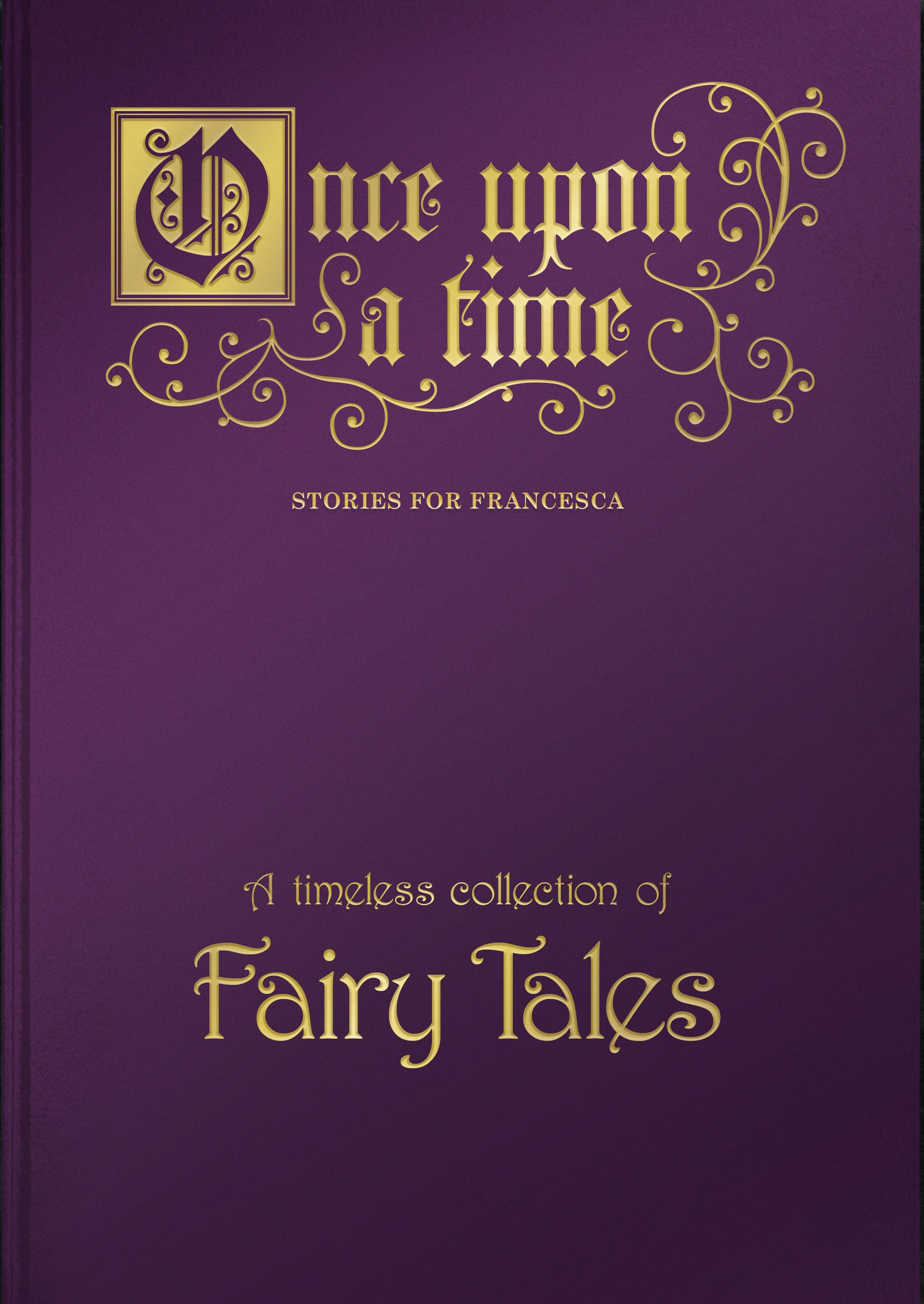 Quote 3: Its okay, just stay positive and everything will be fine!

Initially, for Quote 3, I wanted the words to create a smiley face (shown in the AI board above). However, it turned out looking creepy. Thus I tried to play with the size of the face, scale and hierarchy of the types but something was still not right. It still gave a creepy halloween feel. I decided to scrap the idea and focus on the 1960s psychedelic hippie movement style, where types are soft, warped and portrayed the positive vibe. 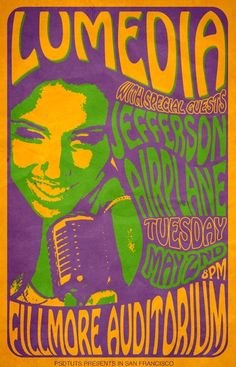 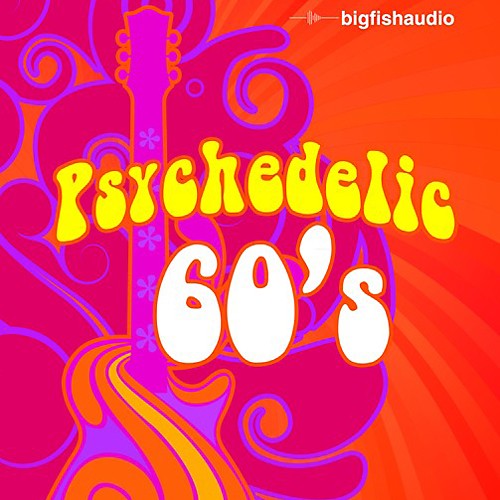 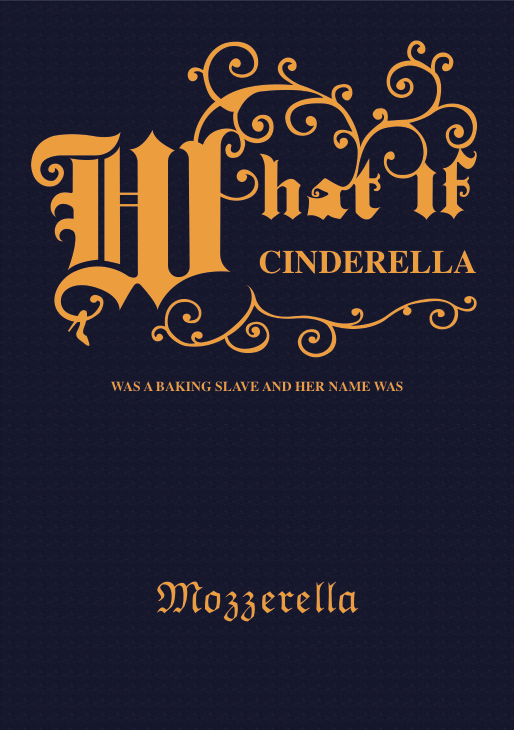 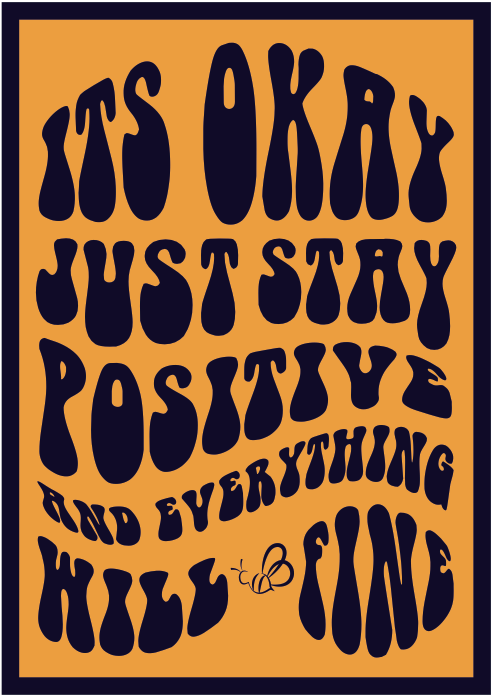 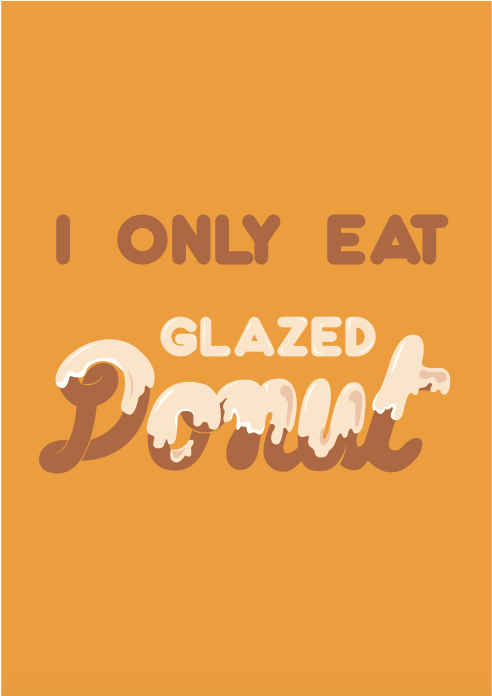 (AFTER REFINEMENT FROM CLASS CRITIQUE) 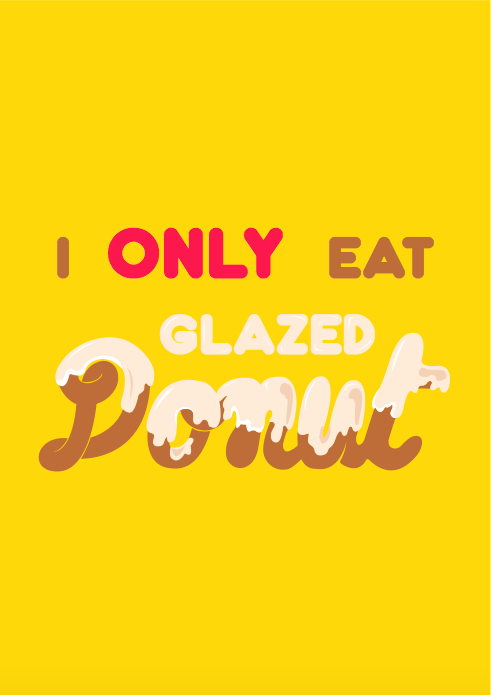 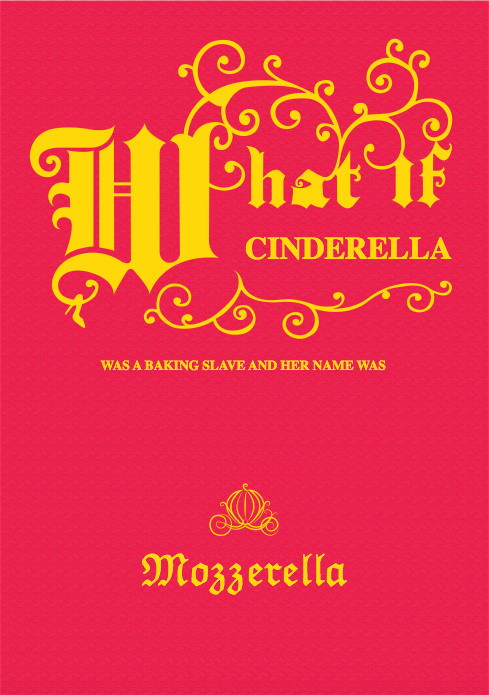 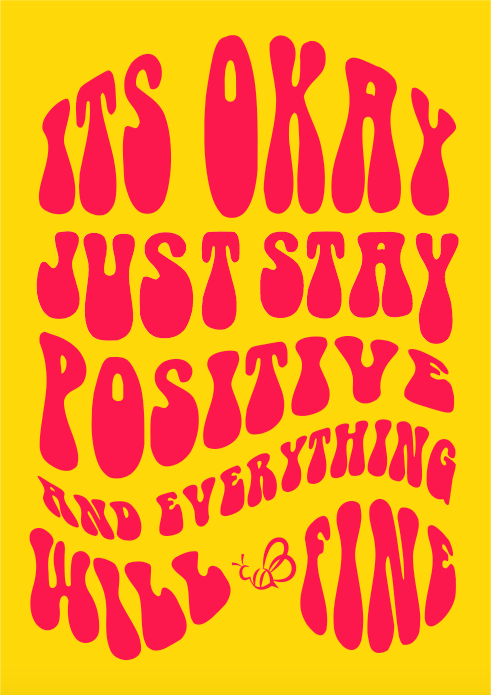 my final 3 posters placed together:

Overall, I really enjoyed in experimenting and playing around with the different fonts and creating my own. However, I feel like I still can push myself to achieve a better outcome if I had plan the designs all together instead of individually. I would like it even more if all 3 pieces would intertwine and connect with each other so it looks like a solid set. Furthermore, instead of making everything centralised, I could play more with the composition of type, layout and off-positions – playing and pushing the boundaries. There is so much more I need to learn to understand and envelop the basis of typography. Just like the typographers we have reviewed, each one of them have their own unique style that makes them, them. One day I shall find my own unique style but yet still be flexible in the application of style to reach a broad audience.