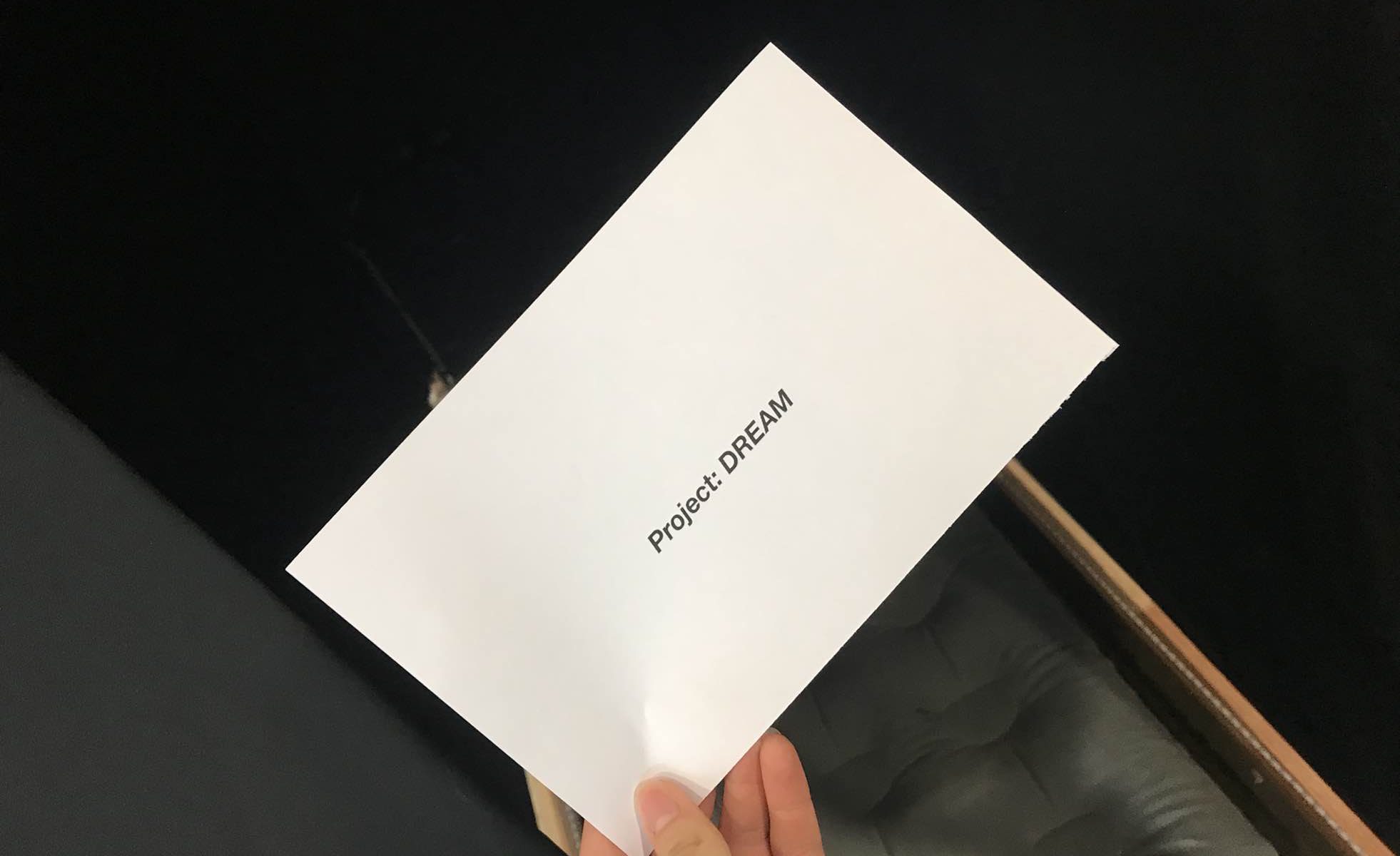 Interstices. A word according to the Oxford dictionary refers to the space between things or events. Merriam Webster refers to “interstices” as “a gap or break in something generally continuous”. For our project, we focused on the Interstices found in the state of human consciousness. Human consciousness is a continuous stream of thought according to William James,  the lauded “Father of American Psychology”  whos works integrate both philosophy and psychology. Yet this stream of consciousness breaks in several stages, mostly sleep. Though our mind is still working when we sleep, we enter a subconscious stage where we have no conscious control over our thoughts and actions. We chose to explore the gap between the two stages in the forms of dreams. Humans sleep to refresh their body after several continuous hours of exerting energy,  and dreams are a side effect of human sleep. Dreaming is a clear indicator of the gap between the conscious and subconscious state of consciousness that people experience when sleeping. We chose to recreate this stage by creating an immersive art installation called “Project: Dream”.

The installation is made up of three portions; the physical space, the electronic components, and the computers, and the dream inventory. The physical space is made up of a wooden frame with a black cloth covering the faces. The rectangular component was meant to create a sense of intimacy and comfort. The mattress was placed on the floor to elicit the idea of a bed and to make the user feel more comfortable and relaxed. For the electronic components, we used a combination of Arduino and Processing.  An alarm clock with a buzzer and LED strips were placed inside the space. The clock was attached to a computer on the outside of the space, while another computer was synced with the mini projector. The projector displayed the compilation of dream garnered beforehand by the previous user. These dreams are typed into the computer stationed outside of the space, and using processing, is transported to the projector.

Video of the Instillation

The overall experience of Project: Dream begins with the user taking off his or her shoes so that they can enter the installation space sequentially and individually. Once inside the space, the user has the choice to lie down or to sit, whatever makes them more comfortable. And to stimulate sleep, the inside of the space is completely dark. The only two sources of light at that moment is the projection, which represents the dream itself; and the small LCD screen that displays the time. These two pieces are meant to attract you into a trance as if you were truly dreaming. As the user reads the “dream” that appears word by word, the alarm will go off at an unexpected time. The alarm will trigger the LED light strips to go on and off according to the sound of the alarm and the projection will cease to display the story. The alarm will go off for a couple for minutes, as this represents the stage where you wake up. This stage in a sense is the interstices, with elements of the conscious world (the lights and the sound of the alarm) permeate into the state of unconsciousness (sleep). Once the alarm turns off, the lights stay on and the projection stops playing completely. This represents you waking up from your slumber and stepping into reality. Once the user exits the space, he or she has the option of typing down and sharing a previous dream inside the Dream Inventory.

This immersive experience is more passive than interactive as the only source of interactivity is typing ones dream after the experience. This is the maximum level of interaction the user must take part in. Originally, we were planning on having the user turn off the alarm button attached to the clock, but due to technical difficulties, was unable to add that function into the product. Project: Dream is a more immersive experience with the screen being projected on all sides of the wall, the intimacy of the room, and the sensory impact of the mattress and dark room. Though the feedback, communications, creativity might be on a higher scale of interactivity; continuums such as control, productivity, and adaptivity are more passive. The feedback response is present though not always physically, the reaction is internally felt by the body and mind. The body starts to feel the effects of the comfortable dark room and when the room starts to react to the alarm, the user’s body also starts to react. In terms of classifying the work based on the “Fundamentals of Digital Art”, Project: Dream falls under a “User has a limited role” in the experience while the interface itself is a “Parallel Real World Experience”. The interface is parallel to the real world as the Arduino itself uses an RTC, which gathers data to give us an accurate reading of the time while waking up on a normal day normally takes 4-5 minutes. The structure of the interface reflects the process of waking up, which in a sense is “Linear”. Though each person is unique and the take away from the experience will be different, there is still a standard procedure that occurs for the user to build upon.

While the project was a team collaboration, each member has certain knowledge and skills that are more beneficial and relevant for the project. In the case for Project: Dream, Alina was responsible with the execution of the Arduino and Processing, while I focused my energy on other aspects such as building and logistics. Alina’s background in installation pieces came in use when considering frame alternatives. Throughout the creation of this instillation we worked on each others strengths and weaknesses.

My experience with this project was very unique and idiosyncratic. This was my first time making a space instillation of this magnitude. Since it was my first time and I had limited experience with Arduino and Processing, I good only try my best and could not contribute any high level critiques or experience. I tried my best to understand the inner workings of Arduino and Processing but could offer only so much. But with the help of my partner, Alina, I was able to better comprehend coding. Another worry I had was that the wooden frame we wanted to use was unavailable, which meant that we had to find our own solution. This led to use creating our own wooden frame from some left over wood and black cloth.