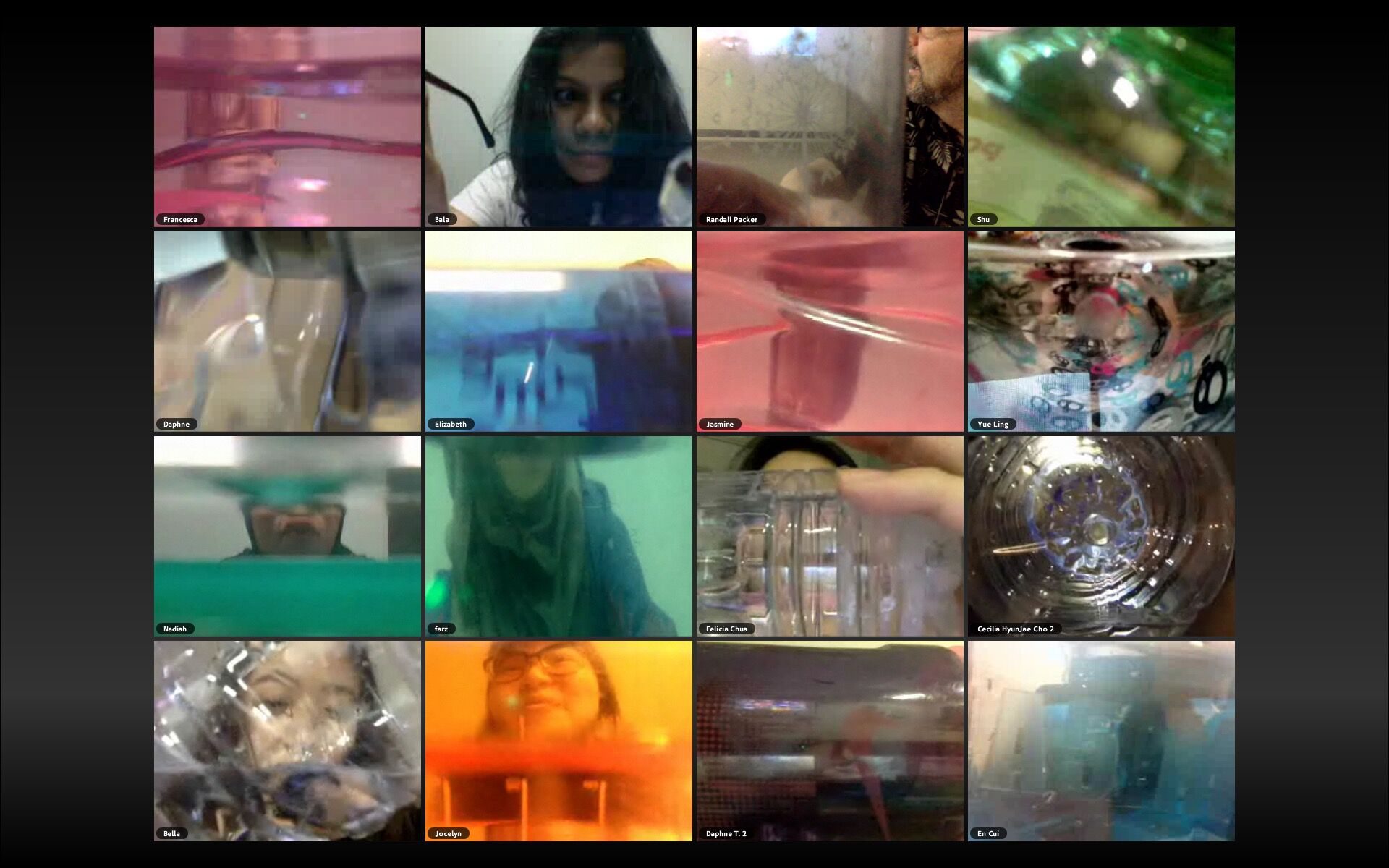 The third space. A space that combines our current space with another space. Yet, it is nearly impossible to coexist in two of the spaces simultaneously. However, this does not mean that we can not communicate with other who have stepped into the third space along side you. In a sense as we step into the third space, we are remodelling it to become our first space.

(Image of everyone coming online on Adobe Connect)

We used Adobe Connect, a more professional counterpart to Skype and FaceTime, as our platform to access the third space. Our third spaces is occupied by our entire class (except two students who could not manage to log on). Originally, we were meant to be located in different first spaces but for the sake of efficiency and time we stayed in the Foundation 4D room. We played around with different activities that connected all of us through the third space. We tried connecting our arms to create a row, touched fingers with the people next to us, covered the screen in a monochrome color, and more.

(Image of one of the activities)

The entire experience was fun and amusing. There were a lot of laughs however, that was mostly because we were in the same first space that allowed us to make jokes and see the reaction with others as we did some of our ridiculous activities. Other than the occasional laughs, I felt that fascinated by the experience. Sure, I’ve used Skype to call a friend and gave her a “Hi-5” or exchanged food with Bella during our Telematic Stroll. But to something of this scale with so many people and such unique activities was a novel moment in my third space career.

Though we were in the same first space, we can see people trying to align their hands and arms without discussing it with one another. We had the opportunity and temptation to yell out to the student whose screen was above mine to align our fingers yet we withheld the urge and used the screen itself. This in a way shows how we truly cannot completely be in the first space as well as the third space. We were aware we were in the same room physically yet our mind kept telling us to focus our thoughts in the third space.

(Image of our hands close up)

The third space. Though not an official word in the dictionary, is a word that relates to many of us in this society. We spend so much time in our third space then we do in any other space (granted we are usually asleep while we are in our first space). People usually assume that once we are in the third space or “glued to our phones” that we are completely isolated and anti-social. But they do not realize that the third space is like a community of other like minded people who we can interact and connect with.

In 1980, a live art instillation situated in both New York and California simultaneously is considered one of the earliest forms of live networked media art. This instillation titled, “Hole-in-Space” was launched by artist Kit Galloway and Sherrie Rabinowitz, founders of the Electronic Cafe. These two artists dabbled in the advancing technological side of art that began soon after the introduction of the World Wide Web. The two artists  created a digital bridge that connect the physical distance in our reality. This bridge is located in a place called the “third space”, a space that is not physical where ideas coexist. The bystanders are thrusted into this third space, their own little world, without any previous knowledge or expectation of what this instillation would do.

The instillation required two screens, one in the Lincoln Center in New York City and the other in Century City in Los Angles, that were connected by one satellite. Kit Galloway and Sherrie Rabinowitz created the first live telecast that functioned on realtime between the two different coasts. This live art instillation can be dubbed in today’s society as one of the “first Factime or video call”.

The beauty of the video linked above is that it allowed me to see the candid and genuine reactions of the people who experienced this phenomenon. To us, those who were born and raised in the age where smartphones and LTE (4G Data) is a social norm, the idea of freaking out seems overly dramatic and silly ( 2:40 Audience in LA realizes that the other audience is from New York City). However, society at that time never in their wildest chance believed that this could happen. These people lived their lives thinking that they couldn’t see the uncle who moved to West Coast to pursue his career as a director until he made enough money to come back for Thanksgiving. The audience even believed that the screen was just a prerecording of actors acting as if it was real time (3:03). This was time in our modern history where everything felt so pure and untouched by harms of the World Wide Web. Everyone was just having fun and reveling at the wonders of the third space.

This Iive art piece, contrary to other live performances where the audience merely watches the artist in his or her element, requires the help of the unsuspecting and curious audience. Granted, by the last telecast, many people made plans to meet each other at the two locations. Specifically a The unclear nature of the project allowed the artwork to be completely be run by the audience by letting them interpret the work in their own way. Certain people used this project to see the face of loved ones who they haven’t seen in a while, while others as seen in the video, started to treat this as a chance  to bring about their flirty side. This in a sense makes the audience, the artist and the artist, the audience. The intended audience becomes the artist because they have total control and paint the essence of the artwork on the blank screen. While the original artist becomes the audience as they witness how the “new” artists choose to pursue the artwork.

Kit Galloway and Sherrie Rabinowitz’s “Hole-in-Space” is a revolutionary piece of art that has continued to influence future generations of artists. Such as the artistic duo, Lutherstadt Wittenberg, who perform live art from different places in the world. Specifically, their “Limitless Distances” performance, which is about longing, distance, and connection. The artists performed this at “Meno Parkas” gallery in Kaunas, Lithuania and artist residency “Route-Art-Rageous” in Lutherstadt Wittenberg. Technology has influenced our society in many ways, from education to leisure and art. Art no longer pertains to traditional mediums such as painting and sculpture but it has expanded  to ready made objects and technology.