Racism takes many forms and can happen in many places. It includes prejudice, discrimination or hatred directed at someone because of their colour, ethnicity or origin.

People often associate racism with acts of abuse or harassment. However, it doesn’t need to involve violent behaviour. Take racial name-calling and jokes. Or consider situations when people may be excluded from groups or activities because of their ethnicity.

Objective of this survey:

Participants are of diverse races that includes Chinese, Malays, Indians, Arabs, Pakistani and Burmese. Mostly in 20s but it ranges from 20s to 40s. And most of them have usual or frequent contact with the ethnic minorities.

Based on the interviews using the questionnaire,

1. All respondents generally aware that racism is negative and mostly associated the word racism to anger, disappointment and unfairness. More than half respond that the trend of this issue is increasing across the globe. With the advance use of technologies, there has been a rise of hate speech and racism on social media platforms.

The United Nations Human Rights Council warns that the dissemination of hateful discourses in the online environment can lead people towards their naturalisation and acceptance as something normal.

In other words, if hate speech becomes the ‘new normal’, we can gradually witness online intolerance eventually becoming tolerable and an enduring component of the social landscape. 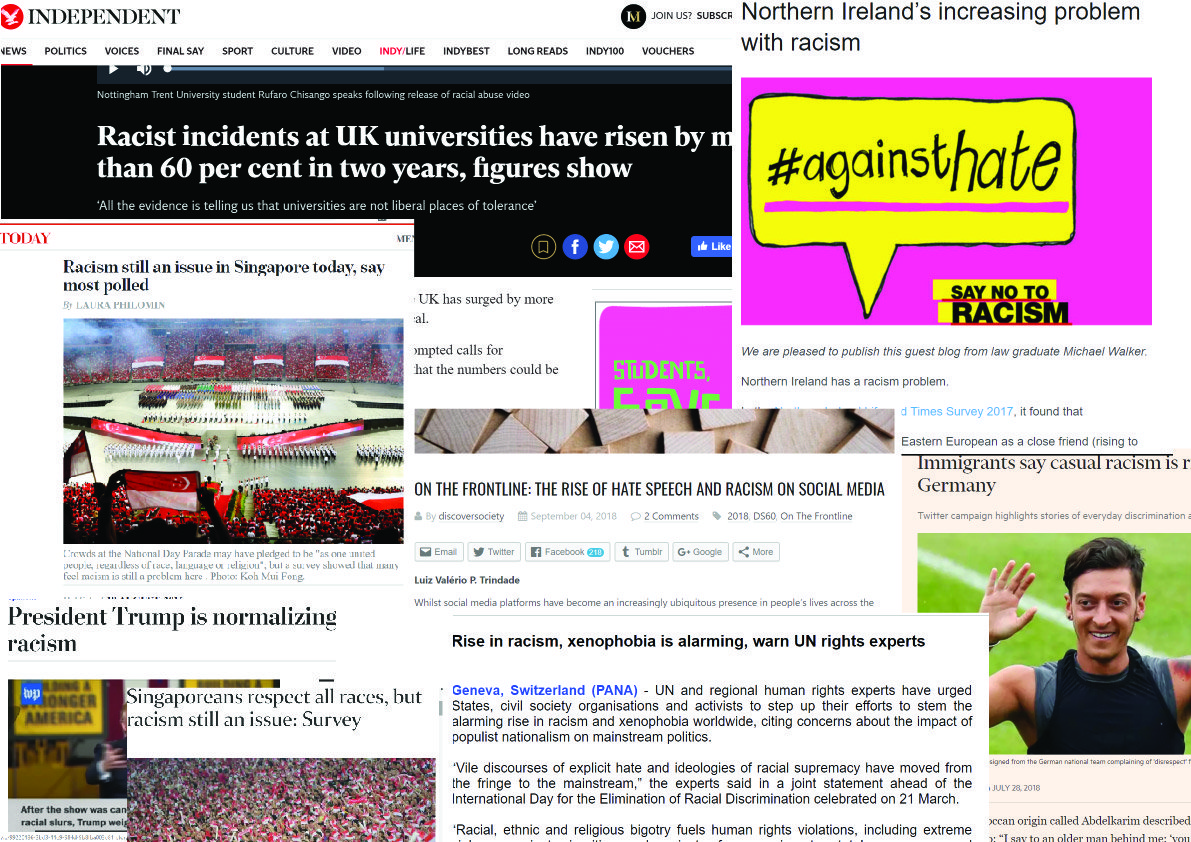 Articles are dated at least in 2017, 2018. Relatively new and still relevant.

2. More than half of the respondents personally experience racial discrimination, with a high occurrence at workplace and during job interviews. 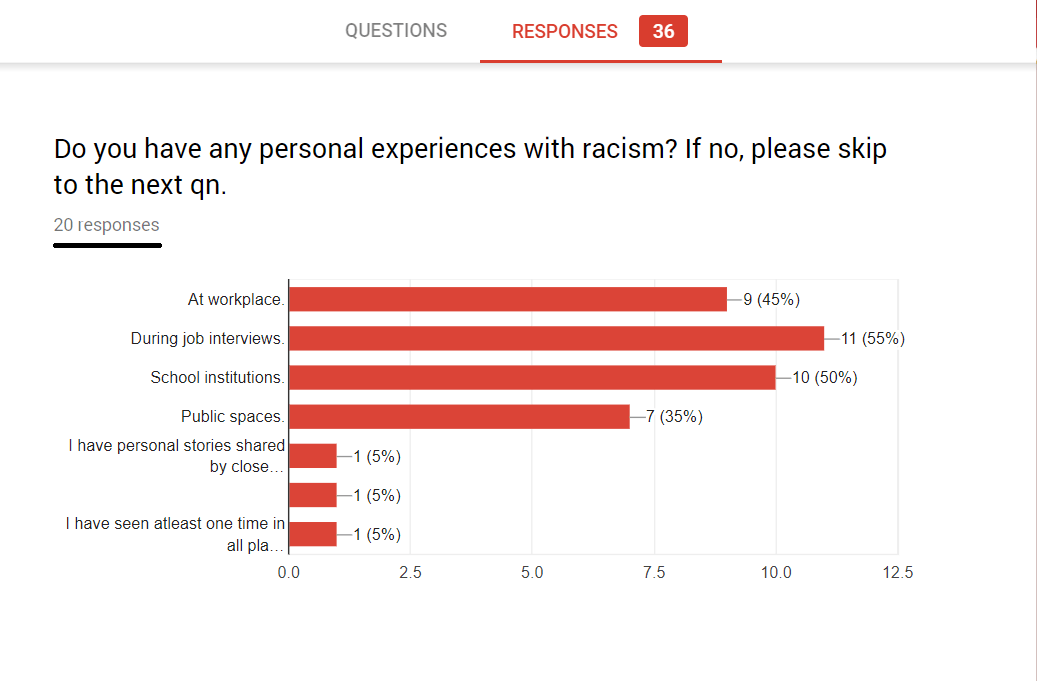 Based on my research online, there are also many cases regarding racial discrimination at school institutions. Those cases are as below:

3. Many stated that if they were confronted a situation, such as when someone is being discriminated racially in public, most of them would stepped forward and speak up for them. The second most voted answer is that they would just stay silent and be on lookout; only intervene if things get worse.

While silence from passersby often feels to victims as if the public is offering its tacit approval of abuse, some of the respondents said they stayed silent because they did not know what an appropriate response was and felt guilty afterwards for not doing more.

4. Getting know which medium is the most effective in addressing this issue. Mostly voted for raising awareness through prints, posters, brochures etc. And through interactive platforms/kits that encourages interaction between different races and cultures. Often racism is borne out of a lack of proper understanding between races.

The annual event by OnePeople.sg – the ground-up national body for racial and religious harmony – rallies Singaporeans to make a stand against racism and combat racial discrimination and prejudice. The Orange Ribbon Movement symbolizes friendship, brotherhood and kinship underpinned by values of respect, understanding and trust. The event also featured a Tea Talk Corner, where young people had facilitated discussions about racial harmony. 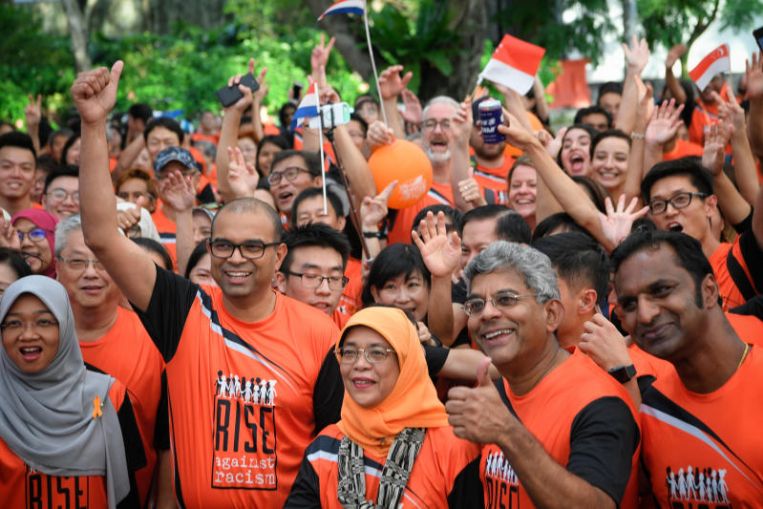 And there are already existing laws in Singapore.

According to Section 298 of the Penal Code: “Uttering words, etc., with deliberate intent to wound the religious or racial feelings of any person” is an offence punishable by up to 3 years in jail and/or a fine. 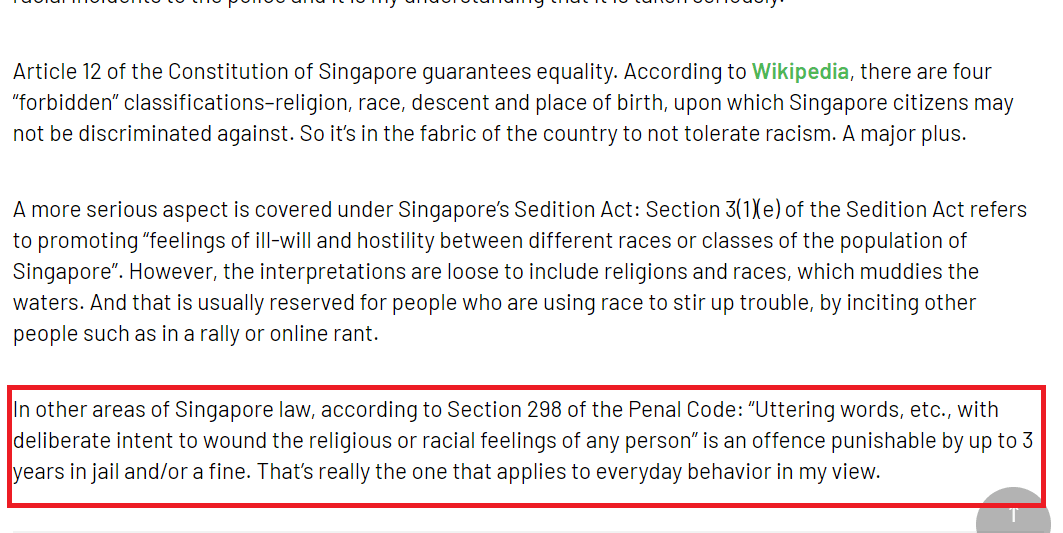 Still, racism remains a huge social and economic problem globally. In the US, it remains a major contributory factor to outcomes including depression, ill health, lower employment and wages. Even though in Singapore, the issue is not as pressing as in other countries, according to the survey commissioned by Channel NewsAsia and the Institute of Policy Studies, where almost half of the 2,000 respondents felt that “racism is still an issue in Singapore”.

Hence, based on the gathered survey, I am able to analyse the opinions of different races about this issue and raise new important concerns that I may overlooked before conducting this survey. This way I could provide an informative and effective design solutions for the general public.