For this assignment, we were given much freedom to do almost anything we wanted, such as a photo series, installation art, performance art or video art. The only restriction was that it had to be on a Singapore social issue.

Having an idea of my limits and abilities, I decided i would do either an installation art, or video art, and maybe a photo series. As a person who actually dislikes dealing with real world problems, the theme was a bummer, but i went in with a positive mind anyway.

Immediately, when thinking of Singapore Social Issues, i instantly think of a few things:

For the first one, I wanted to do a sculpture of 2 wings, one grand and spread out, made of science tools and materials like test tubes and so on. The other, broken and limp, made with art tools like paintbrushes and palettes.

This was to show how many people in Singapore believe the arts are less successful and “good” as the science streams. As a person who have experience on both sides, i think it is rather clear the bias against the arts is strong in Singapore’s society, and many people believing it is below the sciences in terms of success and difficulty.

I also thought about using trophies made from art and sciences materials, perhaps the trophy made of science tools while the stand is from the arts.

But i ended up not using the idea of arts and science discrimination due to the constrains of getting the materials as well as portrayal.

I then thought about the suicide cases idea, which i felt was an increasingly serious issue in Singapore, where people as young as eight or nine are beginning to call suicide hotlines. The number of primary and secondary students ending their lives have also been rising over the years.Thus i wanted to raise this issue.

I wanted to use result slips to make a gun or a noose to show the pressure being placed on students due to results and grades. I initially wanted to use textbook pages and notes, but that would appear more like education and studies being bad; which is definitely not the case, but rather, the grading systems causing pressure.

Finally for the last idea, I wanted to make a sculpture of a parent and child, but the parent made of electronic devices, while the child is a normal human child. This was to show how parents in Singapore these days are highly reliant on electronic devices like phones and tablets to control their child, and it has become such that the child only behaves if they get the phone/tablet.

This idea was a huge issue however, as it was close to impossible for me to find sufficient electronic devices in a short time and short budget.

After consultation, i received a couple of feedback which was enlightening. The first was that for my third idea, i could simply make two hands, a small one and big one, rather than two entire figures, as it would have been easily understood that it was a parent a child.

For the second idea, i could make shoes and a school bag and place them beside a window to show that the student had ended their lives from pressure due to grades.

For my final one, i went with my second idea and merged my idea with the suggestion from consultation. I decided to make a noose and a pair of shoes out of results slips, primary school results slips more specifically to show the young age of people ending their own lives. I also made the shoes a smaller size, similar to the size primary school students feet were.

For the setting and area of set up, i chose a locker (special thanks to Alvin for lending me his locker) as i felt it was appropriate for setting the mood and also the idea of school, where one would lock up their feelings and hide their depression away, locked up in a locker. 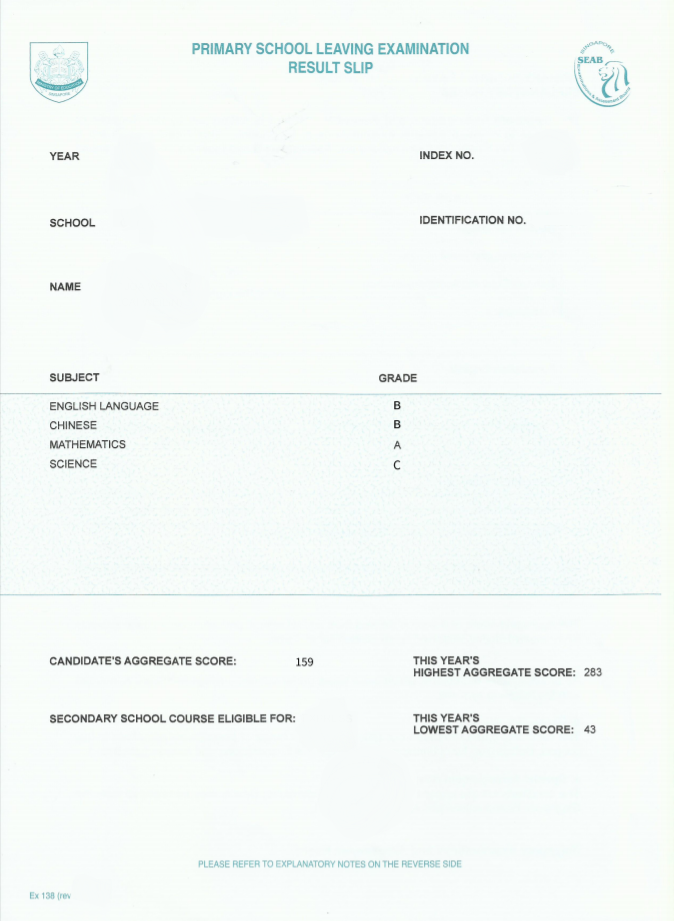 The above is an image of the result slip i used, but the actual one had my name and details. I had to edit my grades to lower ones than i actually had as i had to make it more believable that the student would end their life due to their grade. Yet, i did not want to make it too low as i realized the problem with many of such cases was not that the students had failed their examinations but rather simply did not hit their expectations. There was one case in particular whereby the student had constantly achieved above 70 for all his examinations. However, in one mid-term examination, he scored 50+ for a few papers, and took his own life. 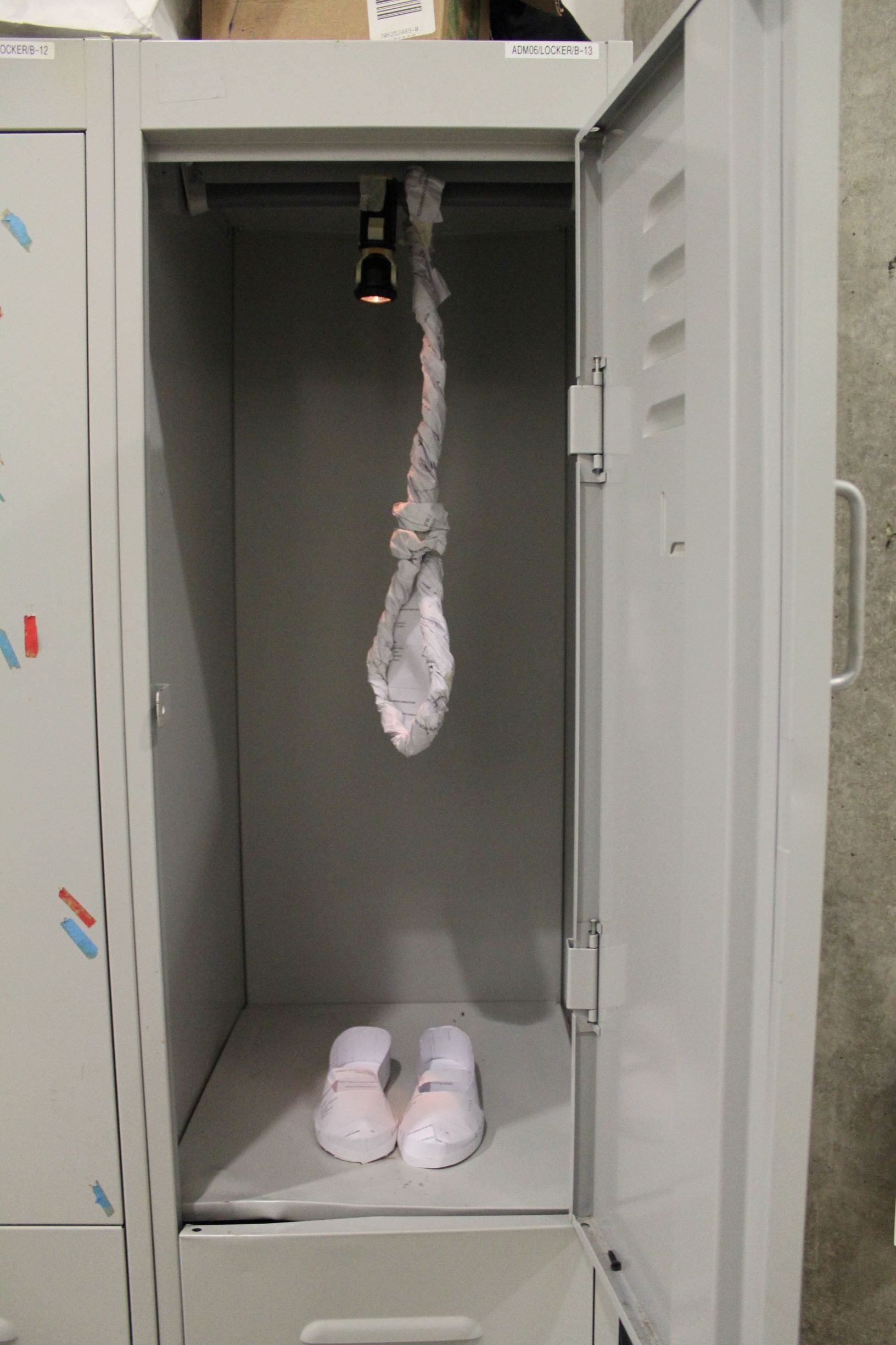 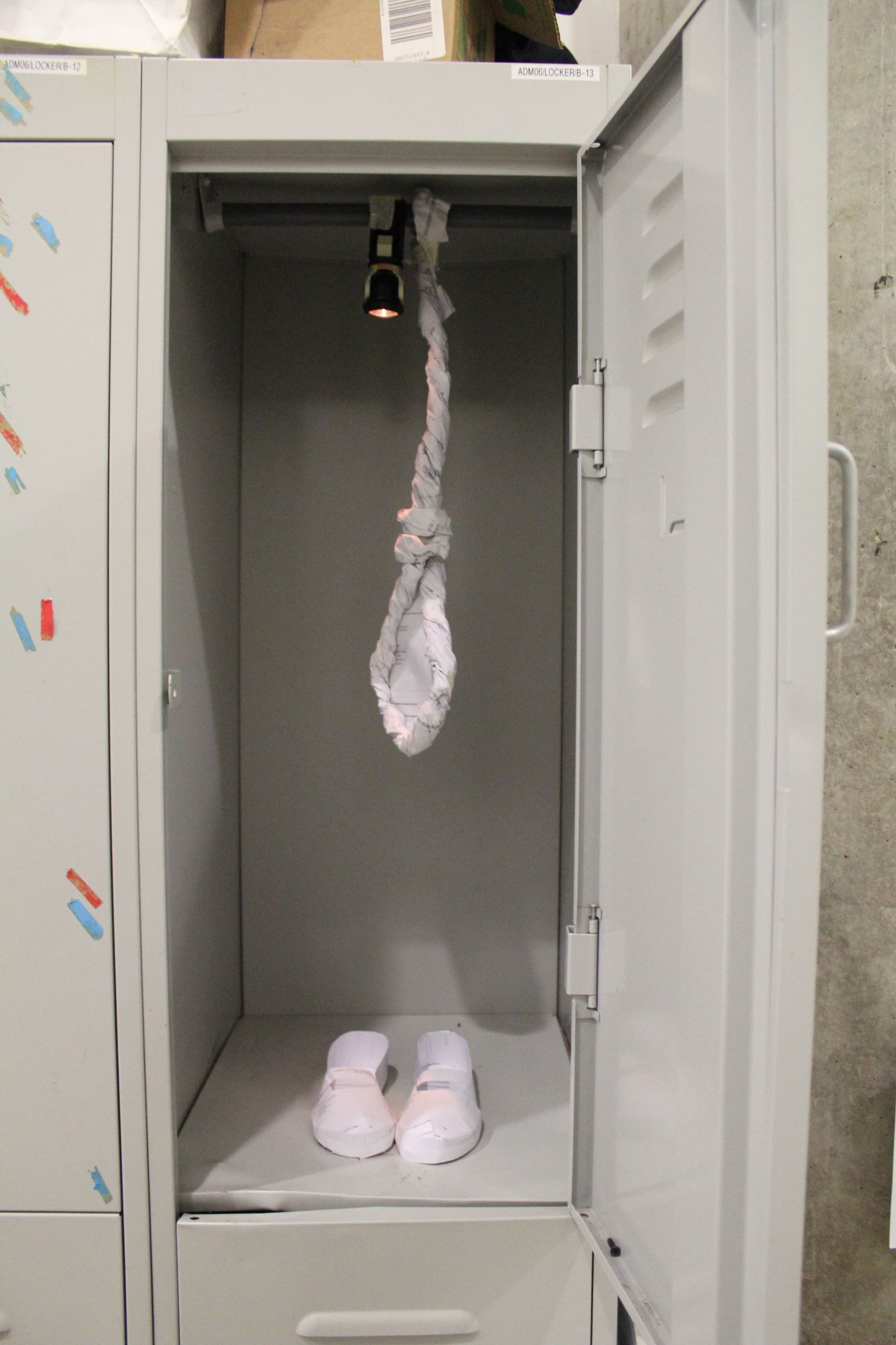 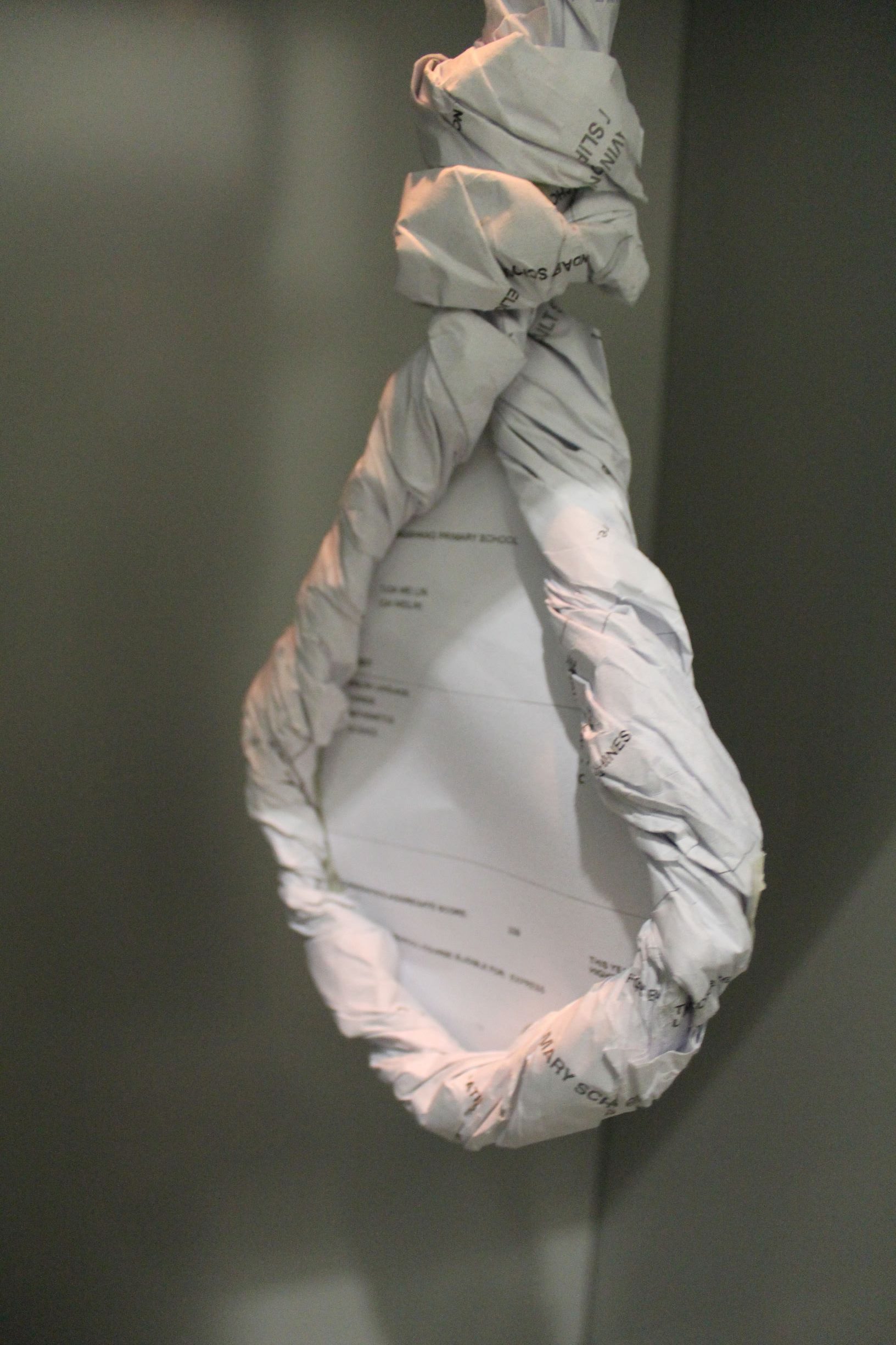 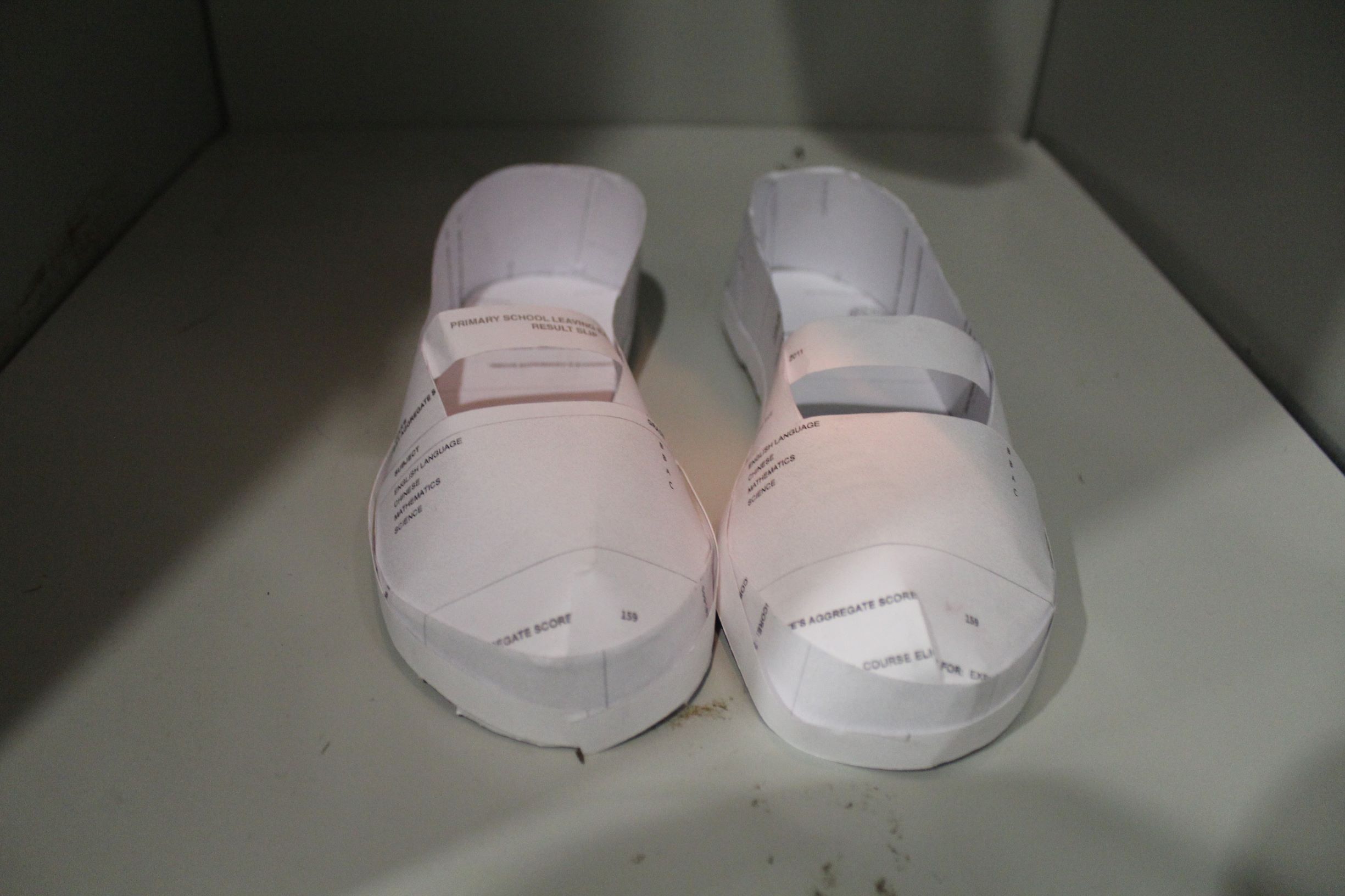 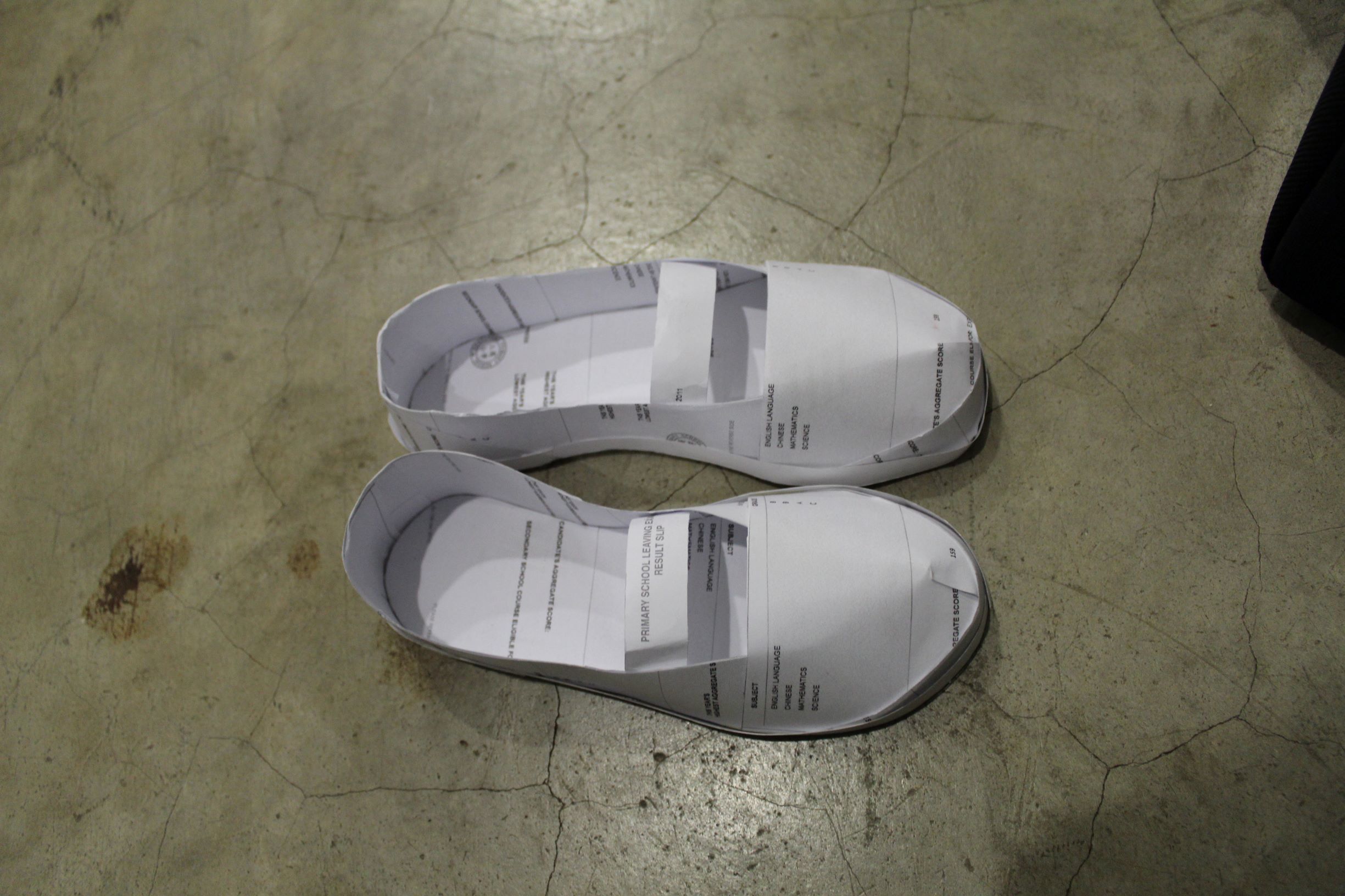 These are pictures of my final set up and installation art.