With Part 1 done, I wanted started to think of ideas for my second part. Really liking and being interested in the two objects below, I wanted to make my vessel based on them.

I later decided to focus on the bound chopsticks and thus began my part 2.

I unfortunately had much difficulty thinking of an idea. It had been suggested that I make a lantern like shape first and then see if I could work on it further.

I thus started doing some sketches and making a prototype, using collected yakult straws I had in my house that would have been otherwise wasted and thrown away. 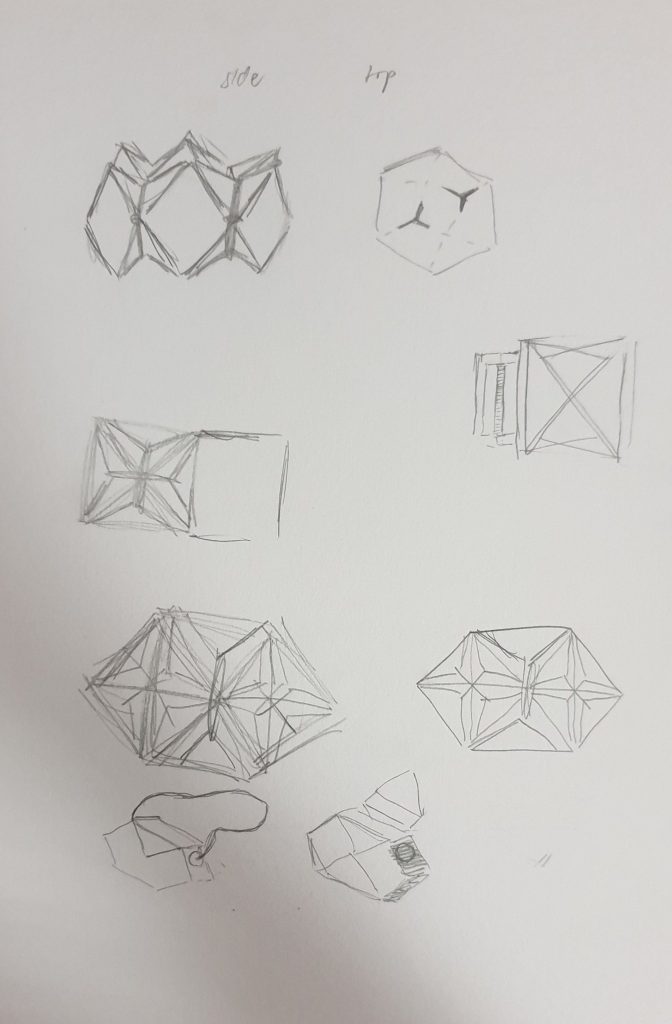 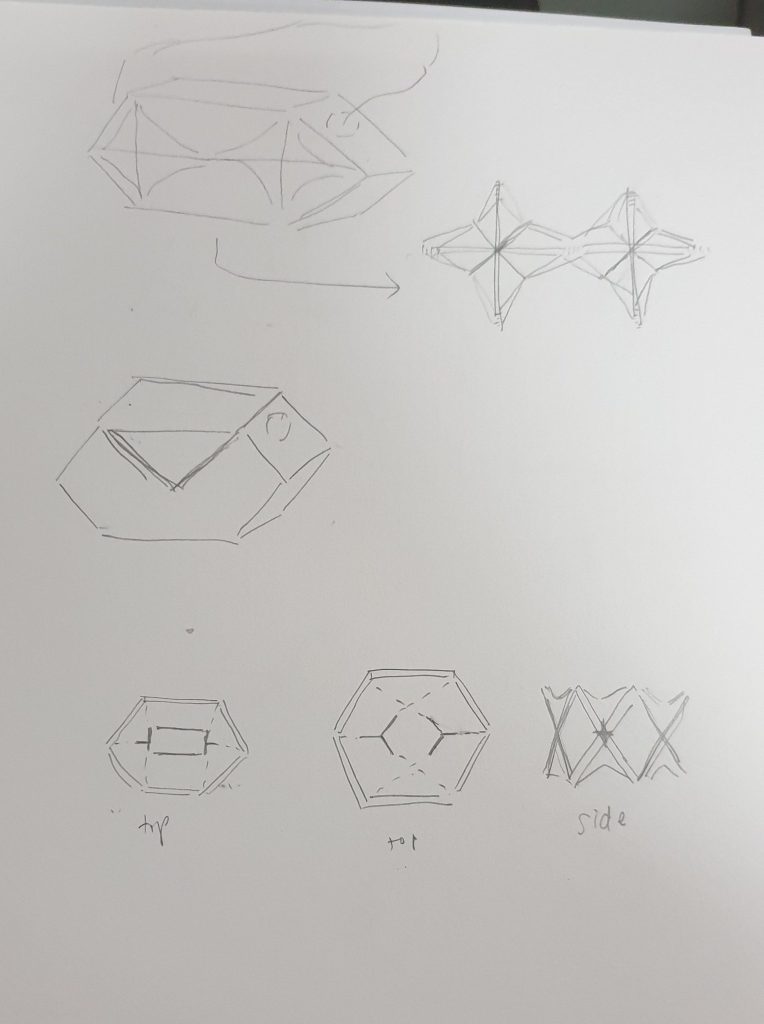 The design on top in the first picture, and bottom in the second is the one that I initially planned and then attempted to do a prototype of. 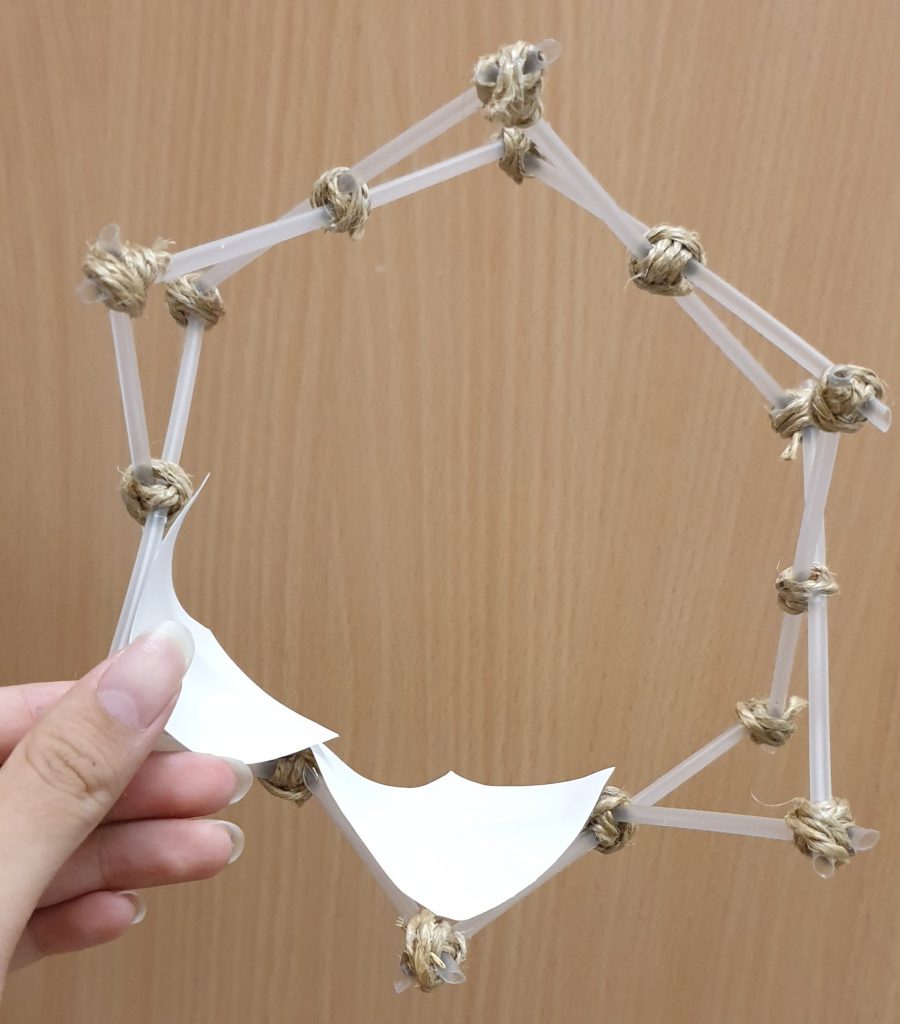 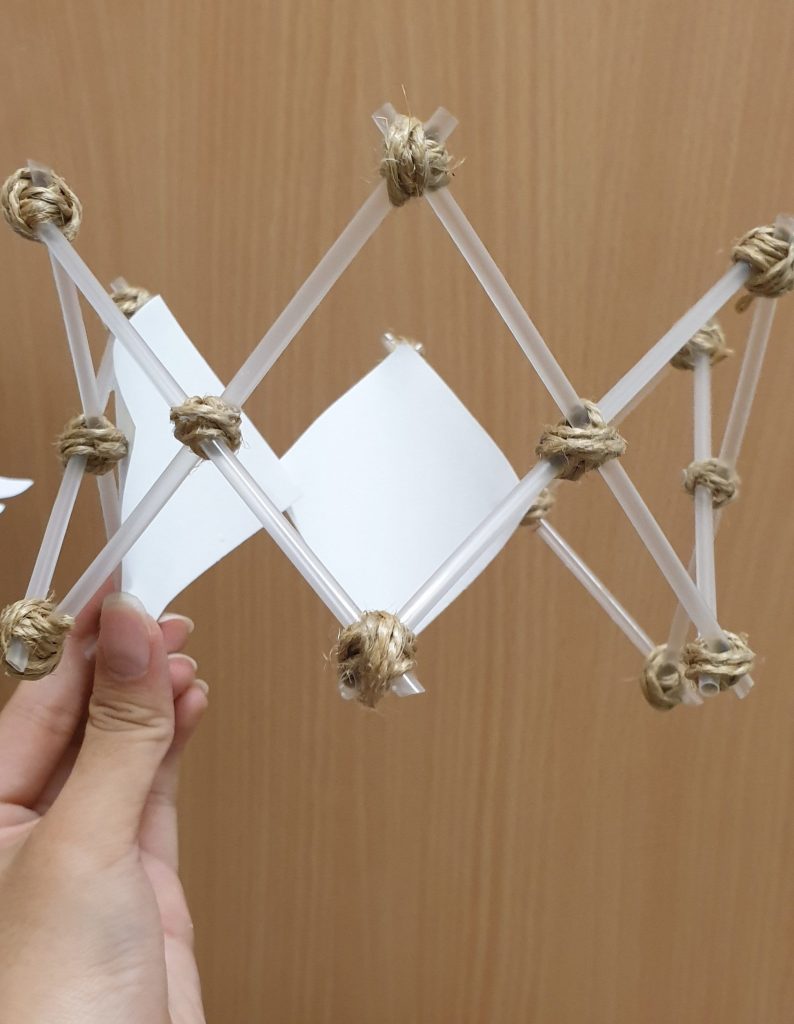 It was a rather interesting shape, however, I wanted to make something that could actually be used, or turn into something that had more use than a lantern. Thus, I decided to make a bag instead, and then drew up the second design in the pictures of my sketches.  The above prototype however was also a fun experience as the smoothness of the straws actually made this prototype a challenge and also opened potential ideas, considering that the joints where able to be slid around freely. This is something I would like to experiment in the future.

Using the same, bound chopstick pattern, I first bound 2 of the same pieces, for the prototype, using straws. I found a reference which I really liked, which is the one shown below.

Sadly, as earlier mentioned, the straws had been too smooth and I hence made it using older chopsticks that had edges; something I did not want in my final piece.

It had been too plain and I thus decided to the twine on all 4 sides instead of just two.

Deciding I liked the way it looked, I made a cleaner better version with rounded chopsticks to form the piece below. And doubled it, to be used for the frame. 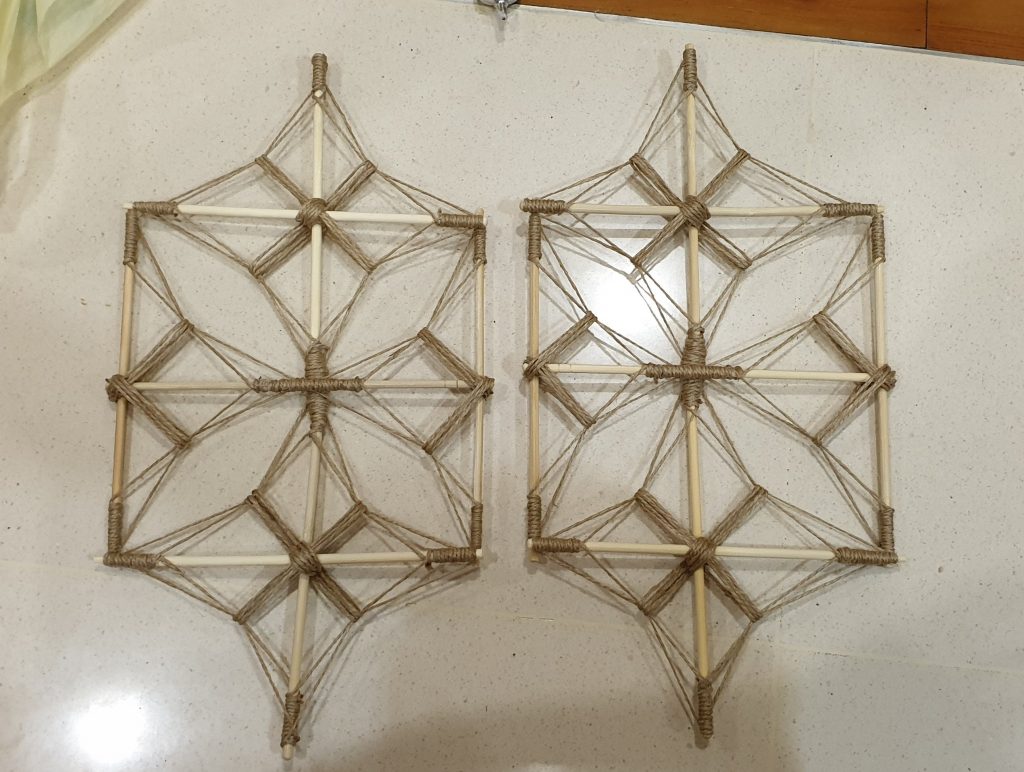 Fooling around with the pieces, I really liked the way it connected when I placed it criss-crossed.

I thus made a piece that could be slot into the already made one. While it was able to stick together just through the arrangement and slotting, I added a tad bit of glue to ensure that it had been well secured. 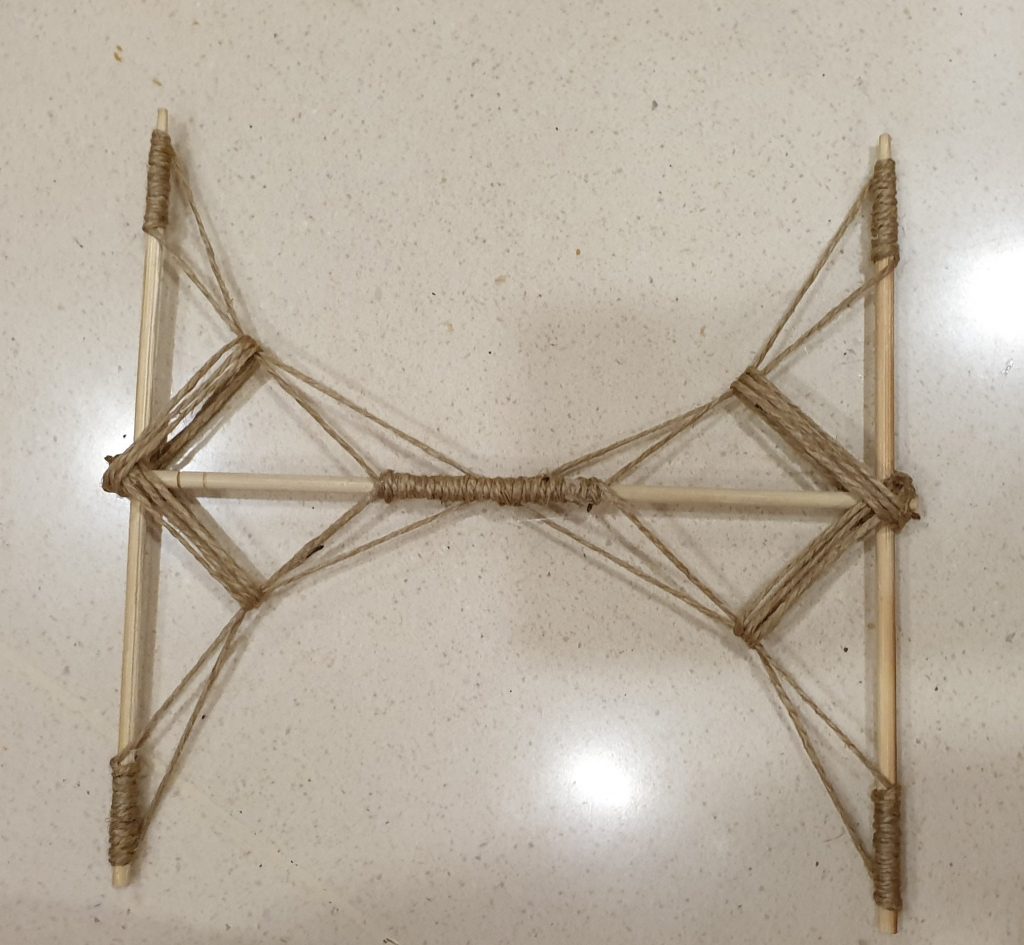 I then did this for both sides, and then, tried to use the previous prototype to test out how to connect the pieces.

However, I did not really like this method of connection as I thought with the confusing pattern it would have been too boxed up and odd. Hence, I decided to only box up the sides.

Using a leftover carton box, I made a frame for the bag.

I then bought imitation leather, and weaved it.

And then, attached it to the cardboard, making a nice cover.

I then made the base blue, and this was roughly how the bag looked, with the frames crudely taped to the sides.

After this, I went on to add a handle as well as make the insides of the bag blue, using blue imitation leather. The below are pictures of the final product. 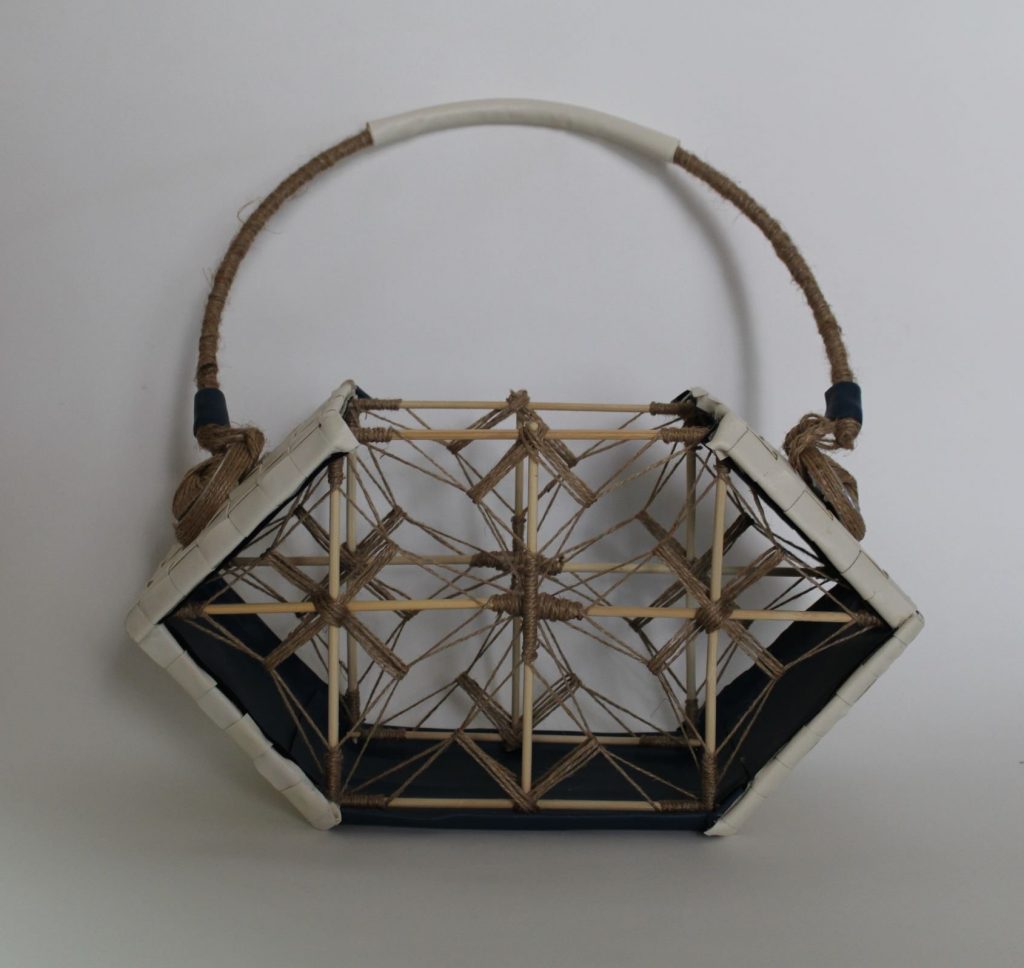 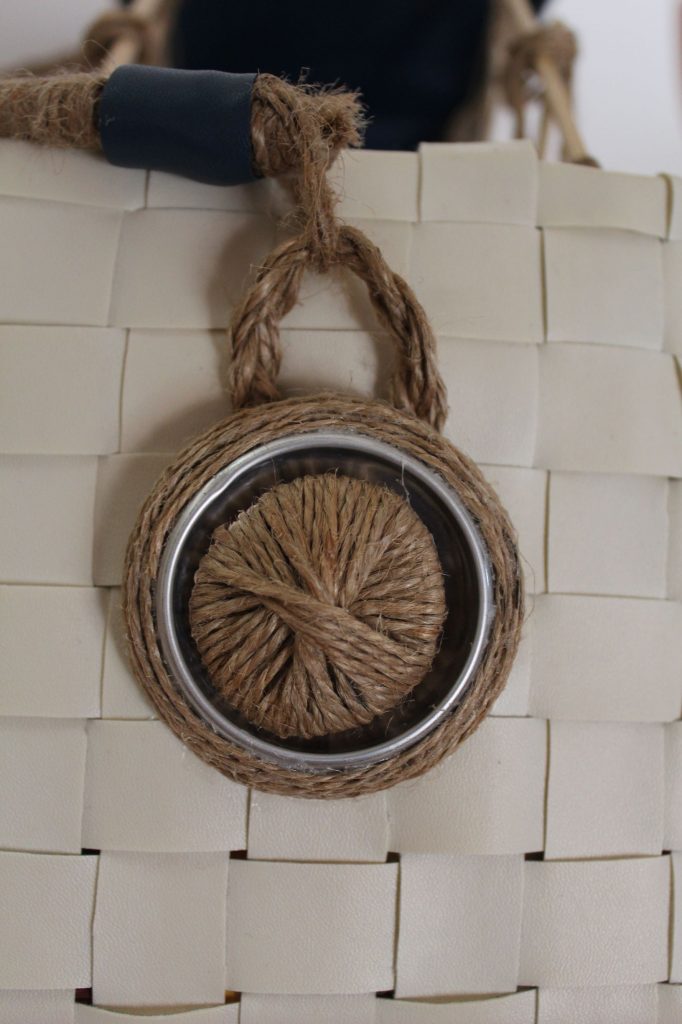 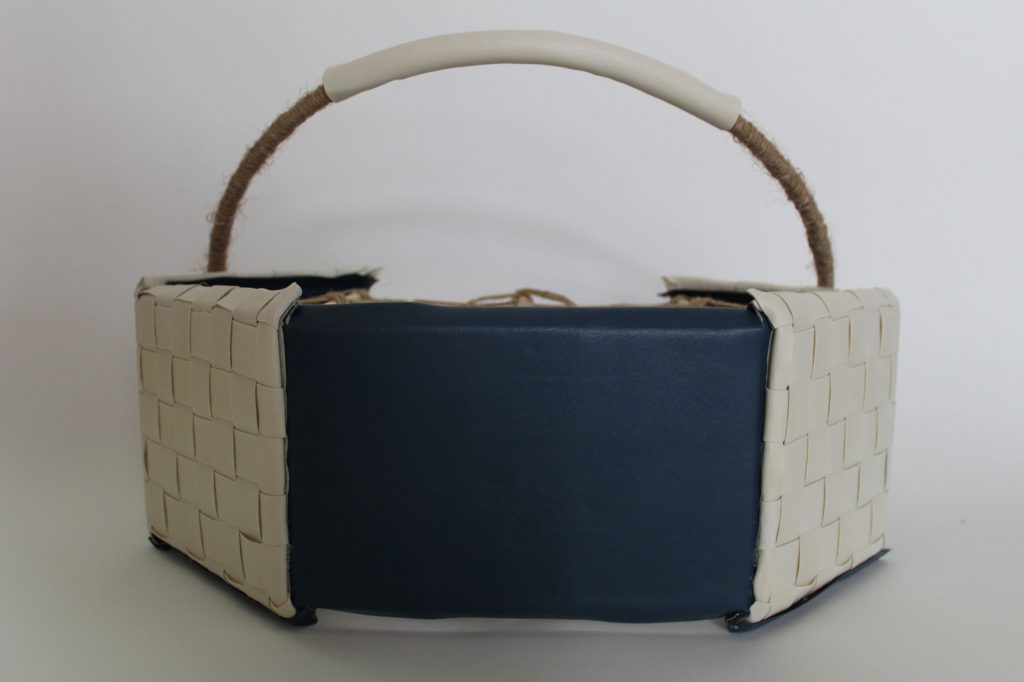 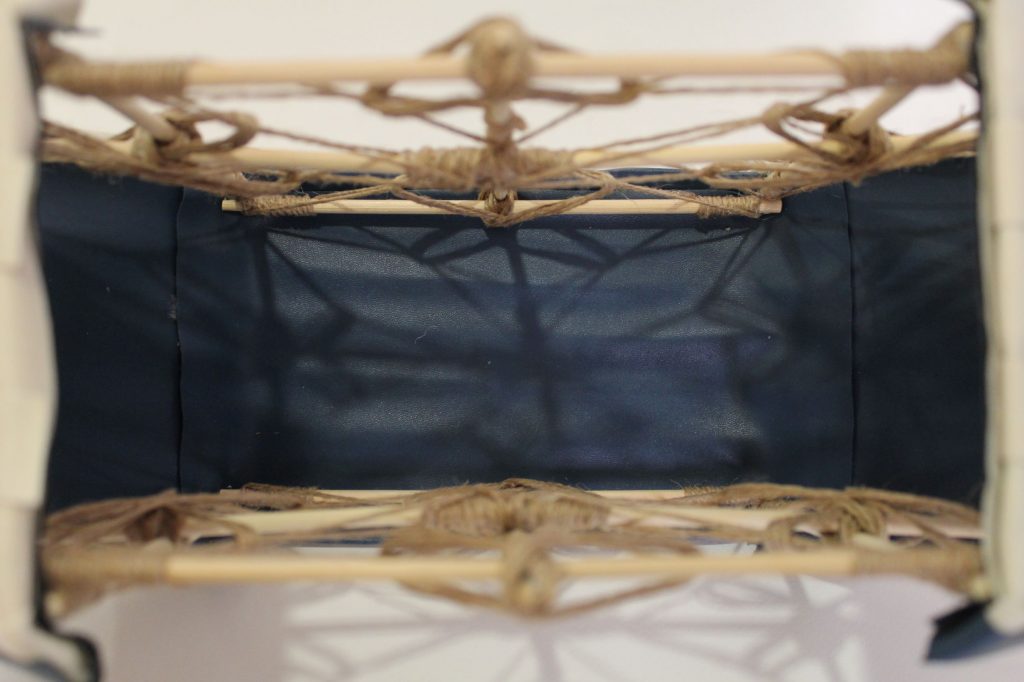 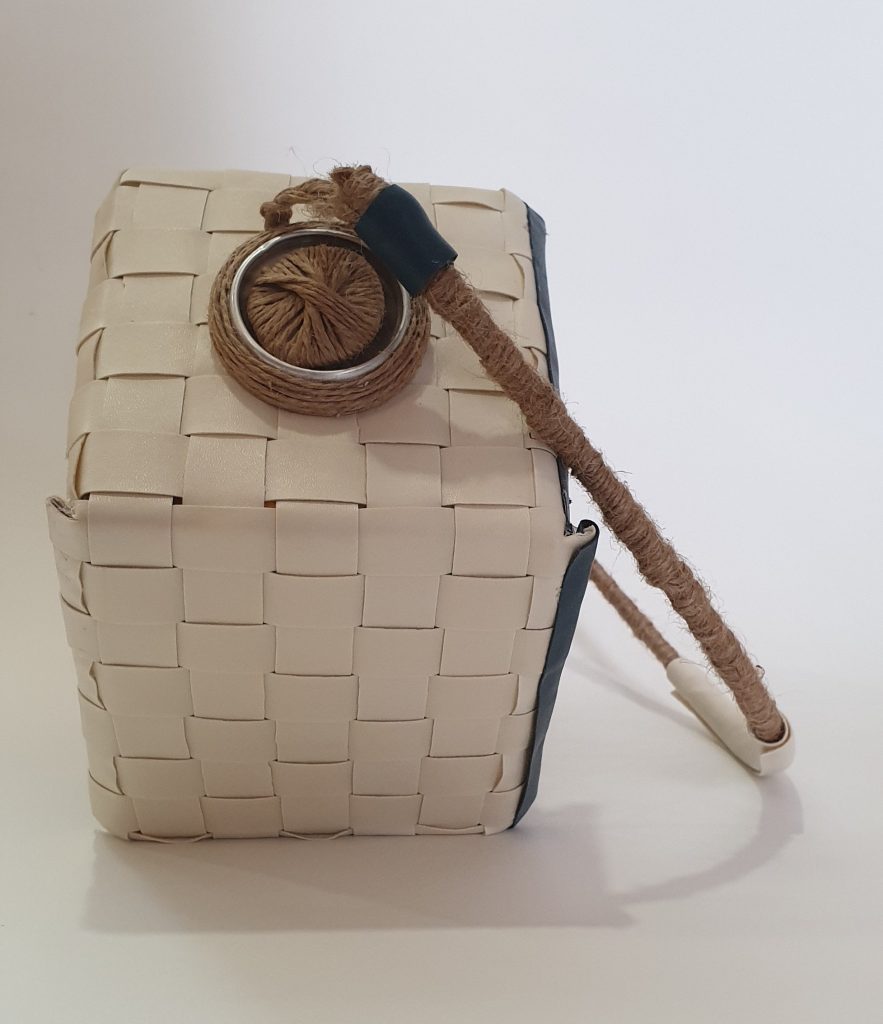 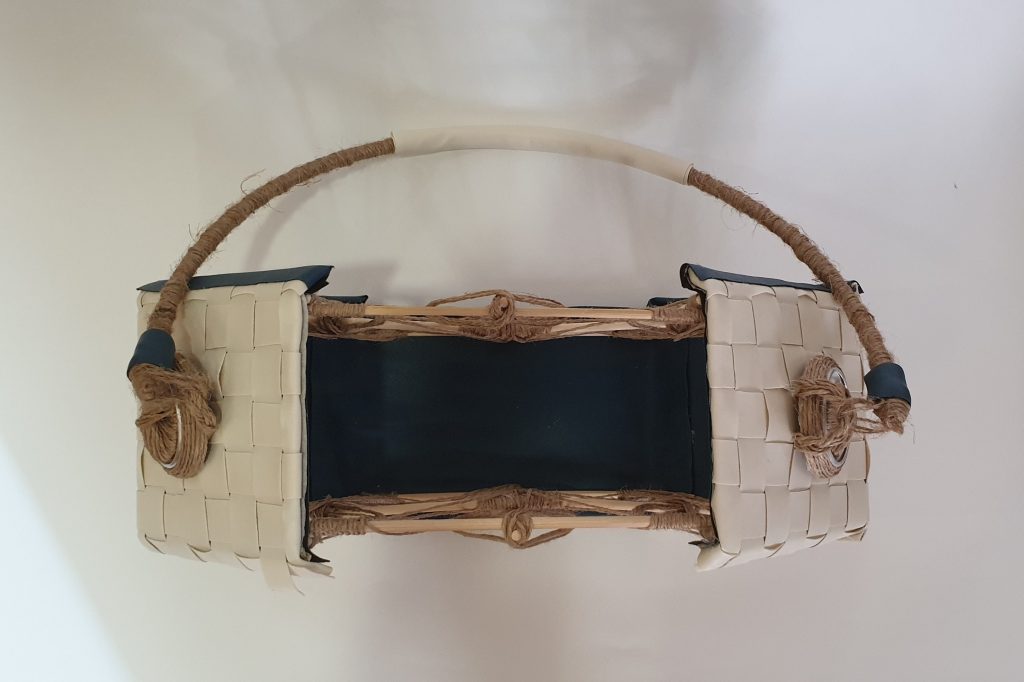 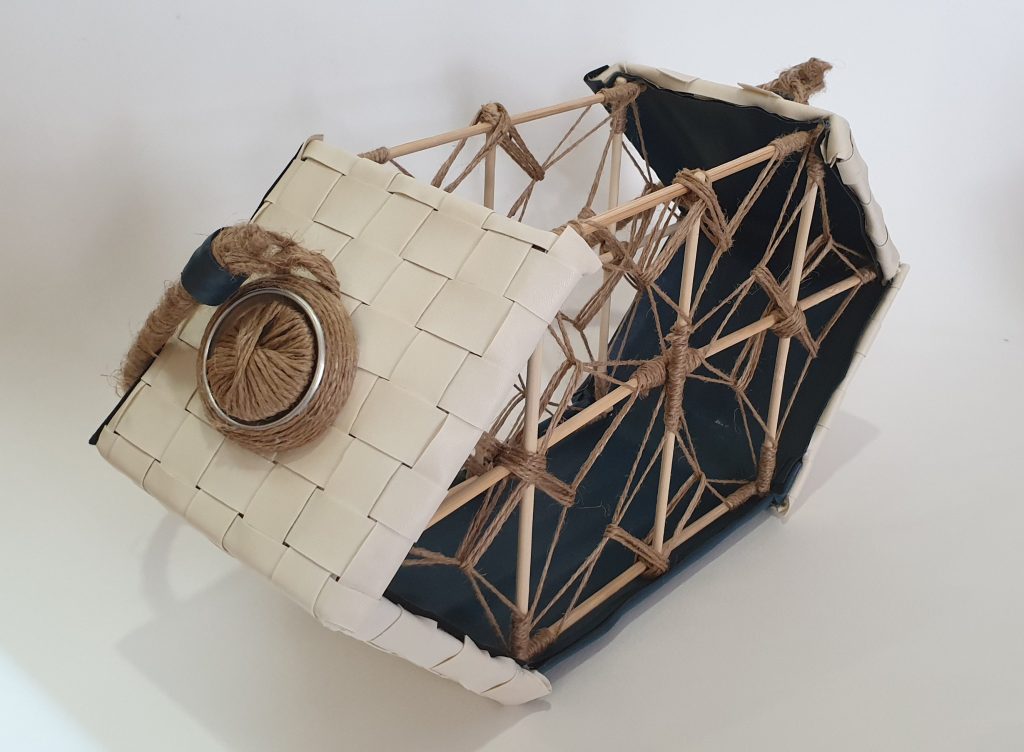 Clearer drawings may be found in the google drive folder in the link below. The orthographic drawings are done in a scale of 1:2. 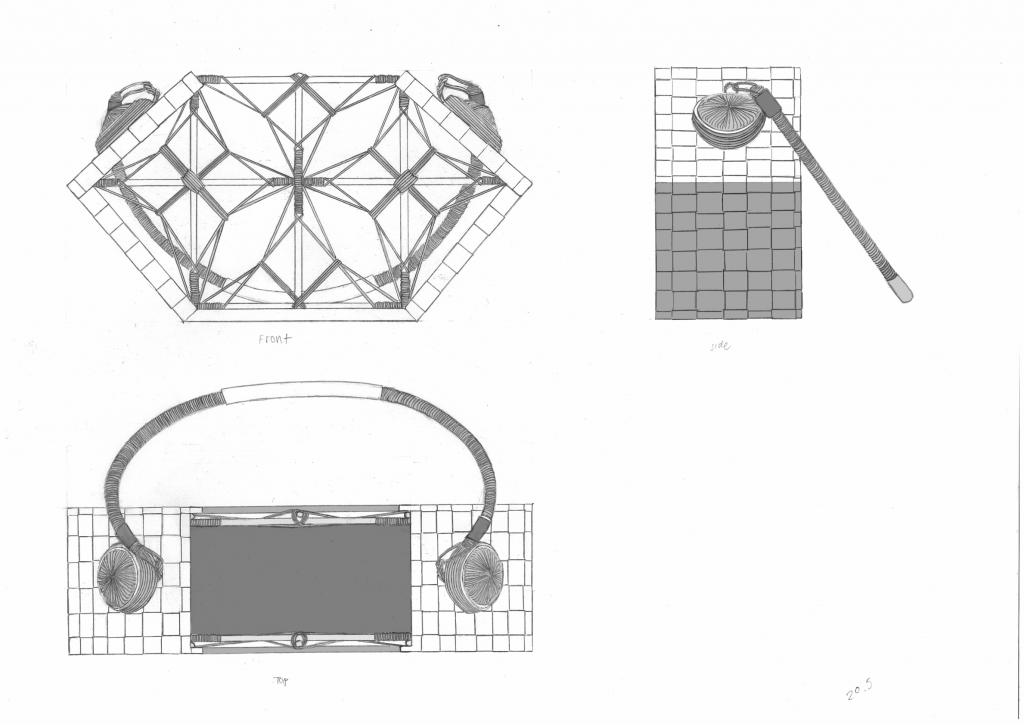 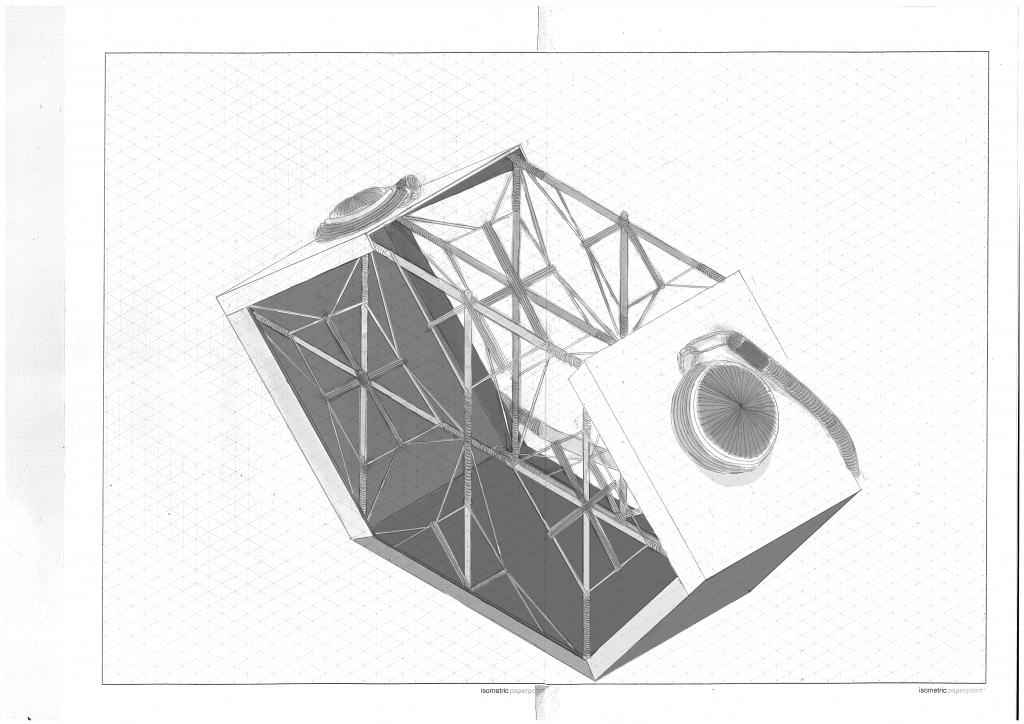 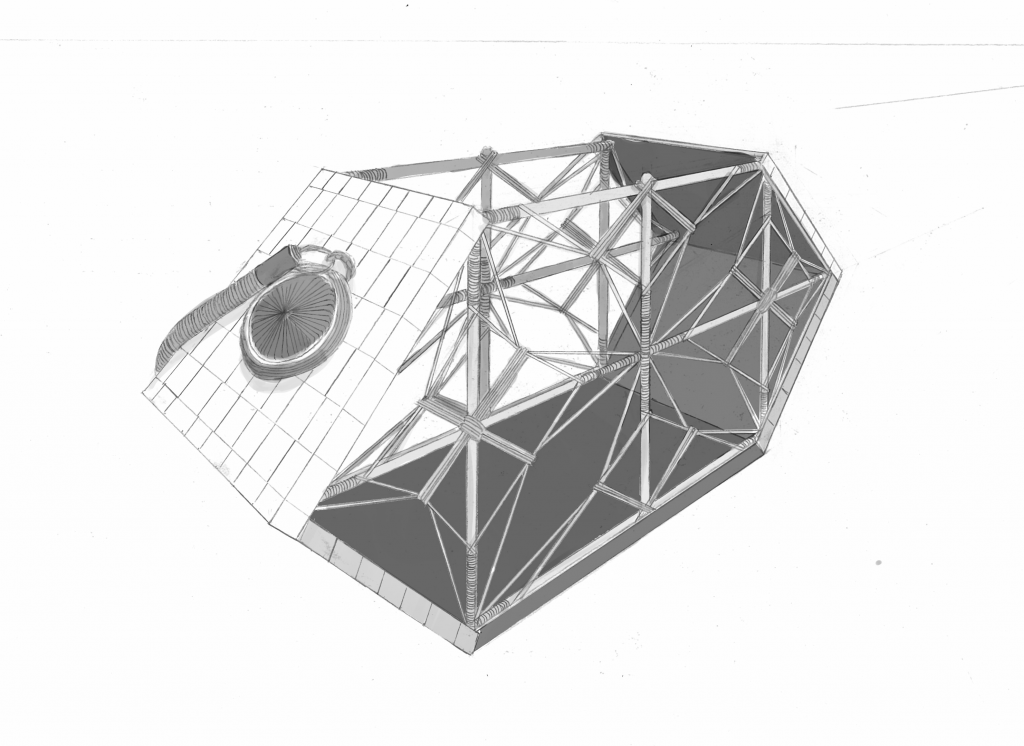 For this assignment, we were tasked to make 4 study expressions or sculptures that show a minimum of 2 of the following verbs:

Then making a vessel to be held, worn or carried which incorporates a minimum of 1 detail from part 1.

As a person who prefers making with an end product in mind, this was one of the first few projects which I let myself experiment freely and attempted different things for the first section before deciding on the vessel to be made.

I first did a couple of really rough what kind of sculptures/study objects I had wanted to make.  ((Below is both initial sketches as some that were added later)) 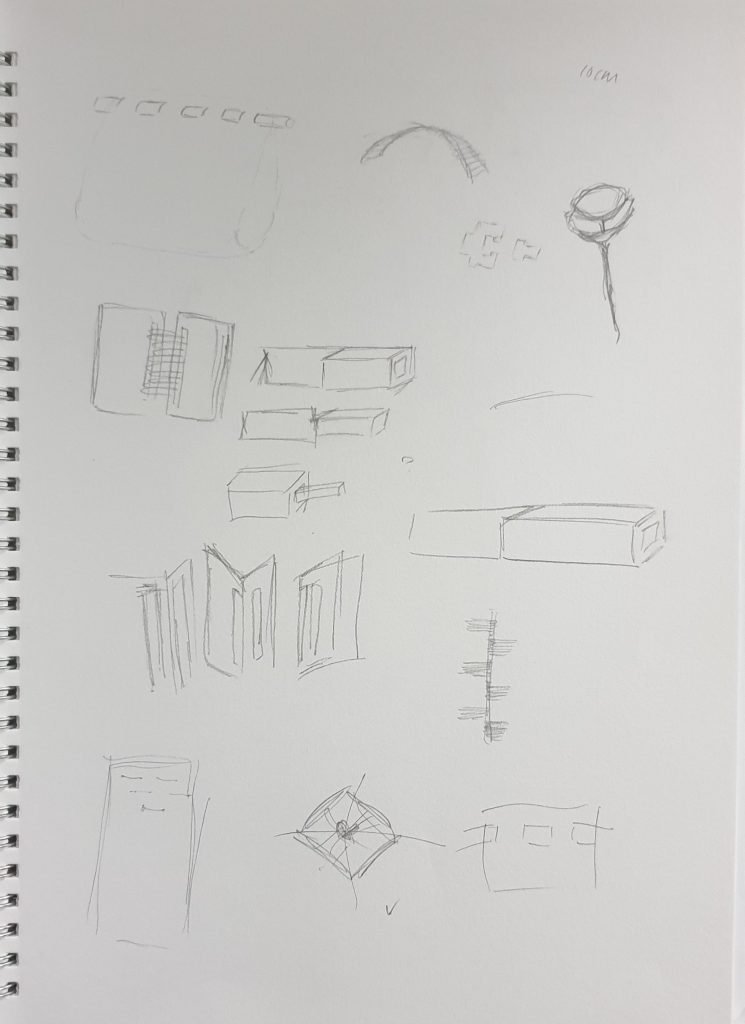 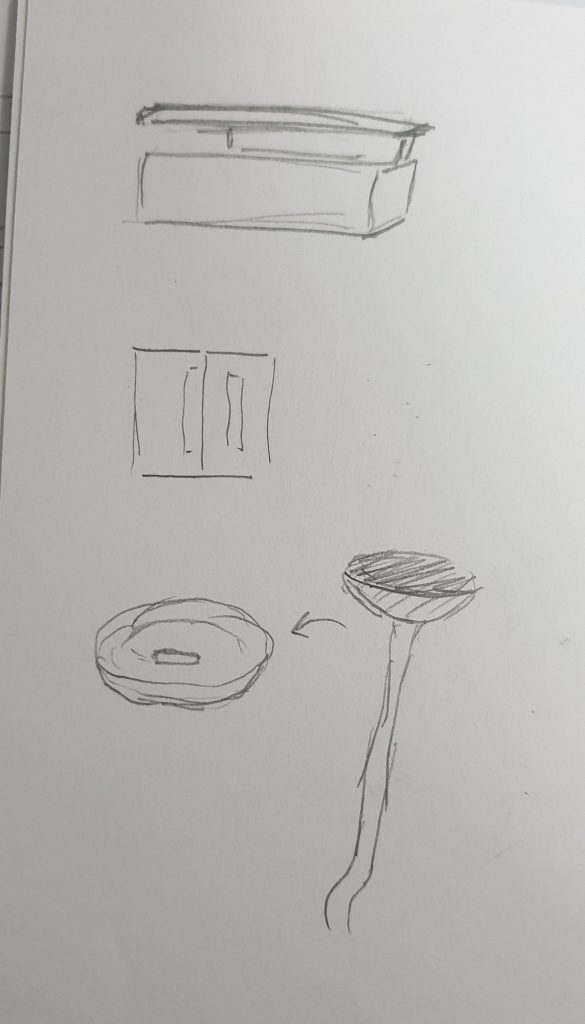 Then, I started thinking about the materials to use.  I had wanted to use wood which I thought complemented the twine; the weave material I decided to use. I also wanted to try using metal, as it would have been a nice contrast.

Since this part of the assignment was near/during Chinese New Year, I actually realised that there were bound to be many metal cans left, and perhaps some leftover chopsticks. I thus wanted to see if I could use them in this project.

For this one, I wanted to do slide with metal, and it would be used to connect 2 different pieces of weave together. I first made it with cardboard then remade it with metal. However, it ended up not really meeting the idea of infusing weave and the other material together, and the weave material was only used for the aesthetics. I initially wanted to use metal from the drink cans for this piece, however, the fixed curved shape of the cans made it impossible to get straight sides and I hence used an aluminium sheet instead.

For this one, it was made using two exact pieces that were binded together in the middle to create 3 flaps. I used a thick board and the twine was wrapped around tightly, thus making the piece extremely strong and well bonded.

This was an object which I made solely through experimentation. I wanted to bind 2 chopsticks using only twine and not glue. Here, the goal was achieved, and I then binded the ends and made a unique shape that really interested me.

This was made using the base of a Coca Cola can, and the twine plaid punctures through the base, and has a button at the end, that is cradled by the curvature of the coke can base. I actually also liked this object and thought metal and twine was an interesting combination.

The binding of two rattan strips by weaving twine between the pieces and around it in the middle. This was also just more experimentation.

Another study piece that had been done midway through my second part of the assignment. I was attempting to bind 2 pieces at the ends and seeing if twine had been enough to join the pieces together, once again using glue only to tape the end of the twine down. It had been sufficient.

With this, my part one was complete and I started to work on Part 2.