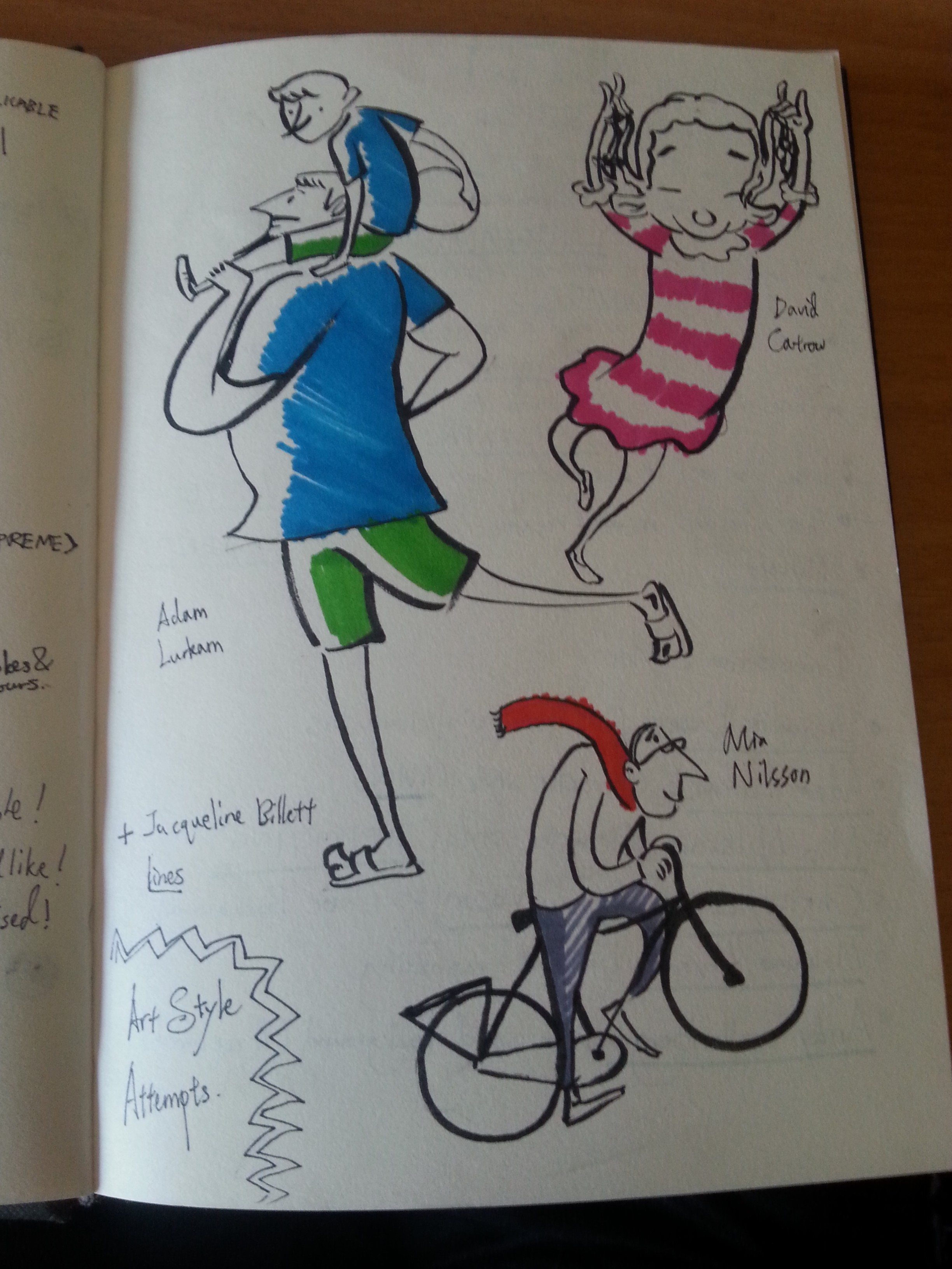 Yes, the current progress I’m gonna show is my concepts. Through the brainstorming of the point of views, I found I’m easily restricted by the 18 points I brought up. Well, it’s the easiest to start from, which soon enough caused me some trouble. 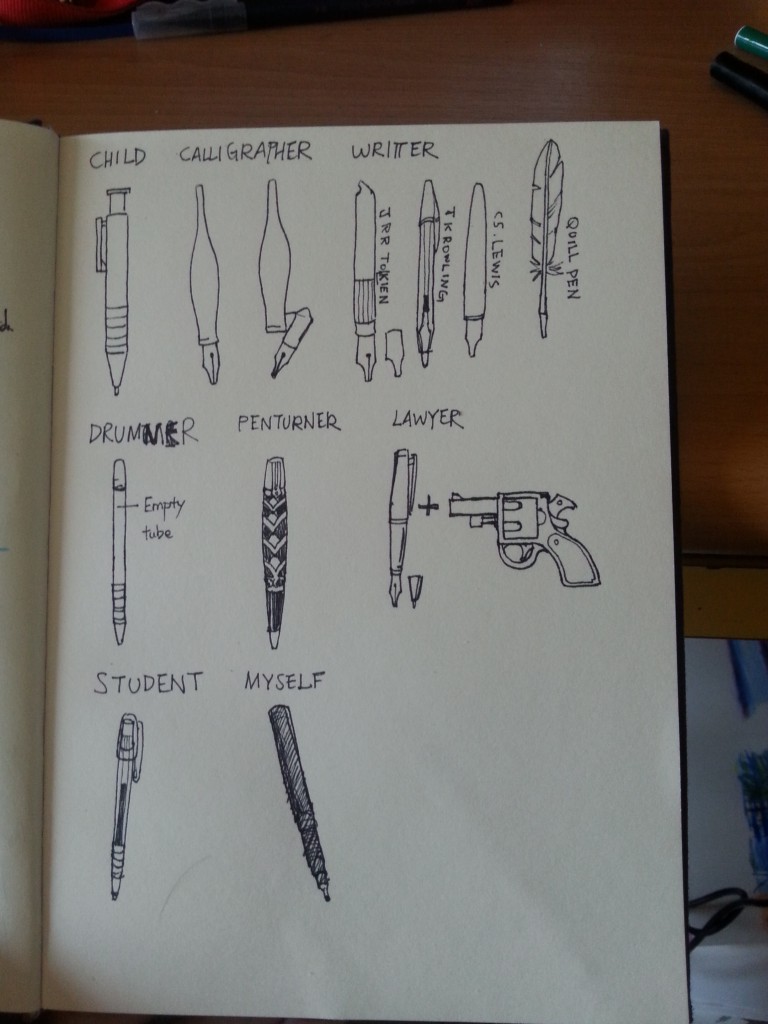 Selecting a suitable pen for each compositions.

First concept I thought up is based on the professions. After rereading my POVs in the previous presentation, I found some of them could not easily visualized with illustrations, especially from the subject RED. The PEN is rather visual to express as I compared it as other objects. Therefore I’ve filtered the 18 points into 8, not only because they can be visualized but also because that they are from my daily observations, comprehensions, and imaginations.

I listed out the following subjects and their POVs towards a pen that would likely to be in the final project.

Reason to select a PEN: A pen to me is ambiguous as it shows what I think. Either an image, a story, an answer, or a plan can’t be confirmed until the tip glides through the paper. 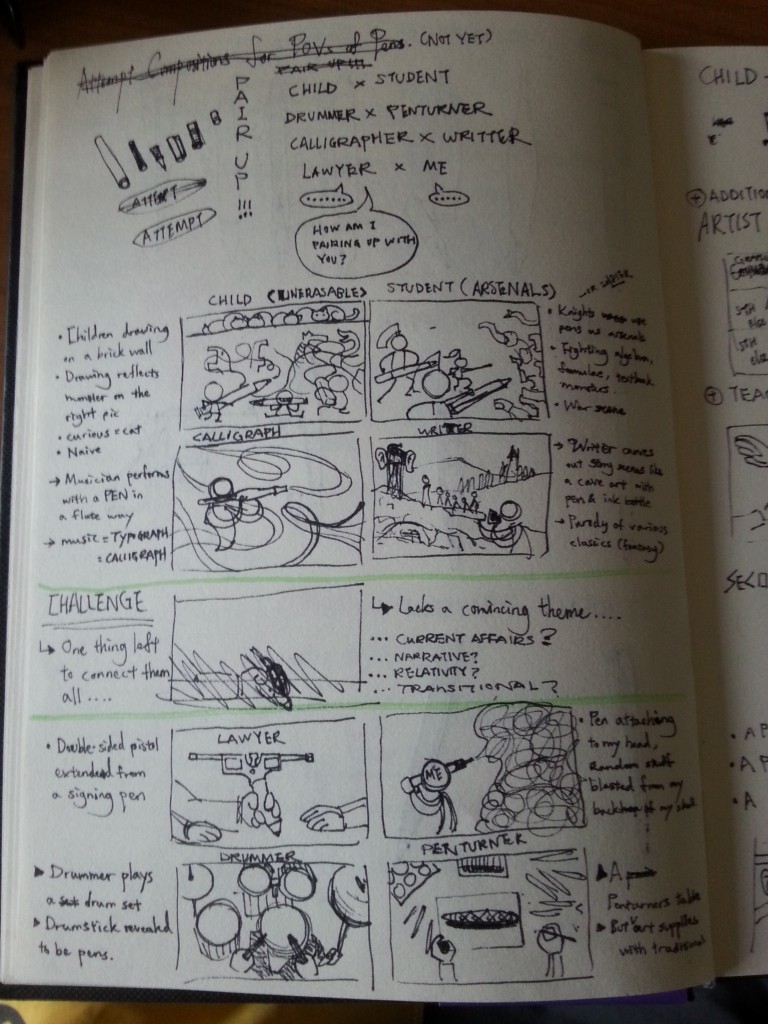 Material contain spoilers. (If you can read it ;P)

I’ve paired them up in order to see if there’s any comparisons or contrasts shown, in such that

The problem with concept ONE is it lacks a convincing theme, and it’s difficult to think of something to tie them together. Based on past experiences, it’s better not to push too much into a concept that can’t work or only work reluctantly. Therefore, I had to brainstorm another concept. 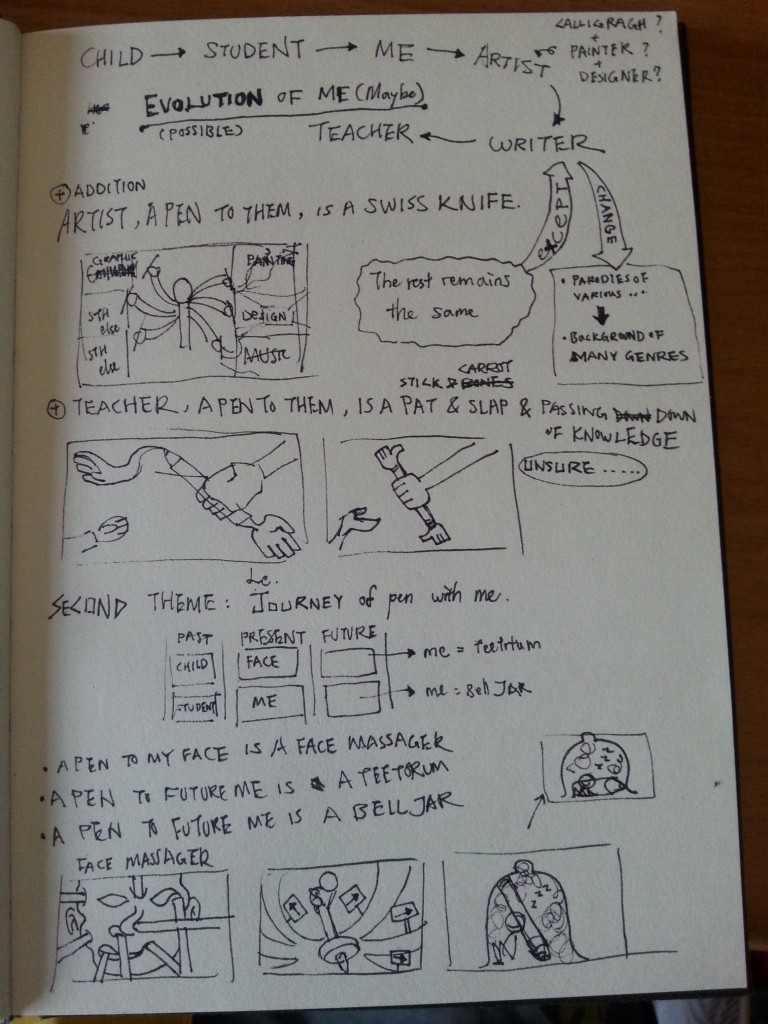 Perhaps I can direct the project into a narrative or transitional? This is what I thought. Ms. Joy suggested building my concept on current affairs, using pens a metaphoric medium. However, due to my lack of sensitivity on the mentioned theme, a self-exploring theme might be a more suitable theme that I am able to handle.

Focusing on stages of growth in the first concept, I based this concept on the object: CHILD, STUDENT, and ME. Thus, the new concept: EVOLUTION OF ME (Maybe) is formed. Why the bracketed maybe? This is because my current stage stop on ME, it’s only half way there. (NOT in terms of biological life-time.) The next half has to be hypothetical, hypothetical about what comes after ME?

I wrote ARTIST first under the obvious reasons. The word ARTIST is generic, it can be painter, designer, musicians, calligraphers, performing actors, and so on. Meanwhile, feeling the previous statement for ARTIST isn’t suitable, I came up with a new statement:

A PEN from the point of view of ARTIST is A SWISS ARMY KNIFE.

Then, I added WRITER in a generic term. It’s an alternate term for creator, any ideas: a film, a piece of music, literature, installations, or biopics, they all started with writing. Therefore, this stage of our creative career is the stage when we are creating our legacies, or masterpiece. The fun part is, this stage can coexist with the ARTIST stage.

What follows is TEACHER, an educator. Not only we’re leaving something behind, we have to leave our skills, ideas and wisdom, things that are hard to be inherited completely. What can we do about it? We teach, we pass it to the next generation. Thus:

A PEN from the point of view of TEACHER is STICK & CARROT and A WAY TO PASS DOWN OUR WISDOM AND KNOWLEDGE.

Concept 3: The Journey of pen WITH me.

A theme with a hypothetical transition for the future, this future is more realistic, and less philosophical. (Am I philosophical for the previous theme……?? HAHA) Parted with three time periods: past, present, and future, this theme focused more on myself personally instead of the generic profession. (Which kinda opposed to what I said in past posts.)

New components are added such as new object: MY FACE and FUTURE ME. With the new objects, new statement are formed:

A PEN from the point of view of FUTURE ME is A BELL JAR.

The concept was said to be more curated, but the theme is still young and there’s a lot to think in terms of presentation and compositions.

I try to be secretive for my statement explanation as not only I try not to spoil everything in case the statements are selected, and also I wanted to let the illustrations speaks for themselves.

For style, I’ll be referring to the artists/illustrators I’ve found for the previous presentation. I’ve experiment with the styles and with the tools I find interesting, a brush pen. I’ve would wanted to try different types of pens for the work too just to emphasize my works. 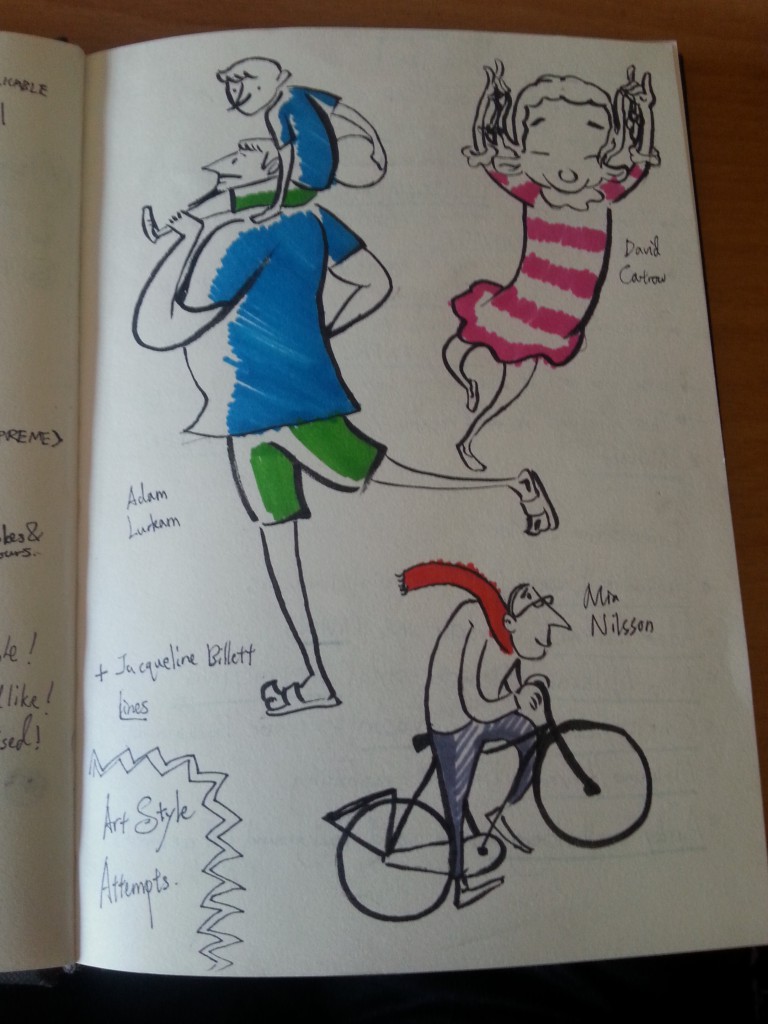 The project will be a combinations of various artists’ styles that can be seen in first glance. I’d love to try an illustration with

They either can be done with wet mediums or digital post production. Perhaps it’d be like the decision of my previous project, regarding mediums attributes. 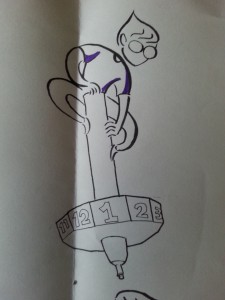 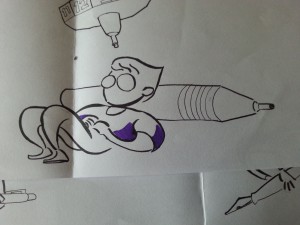 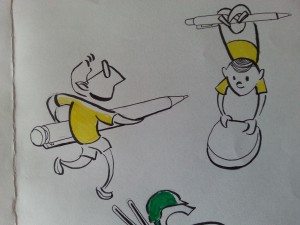 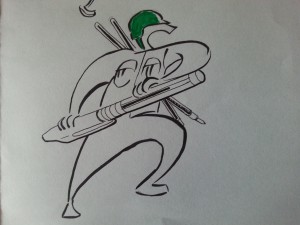 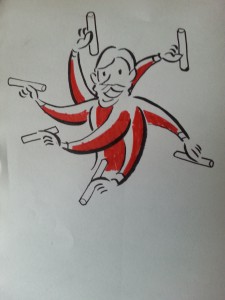 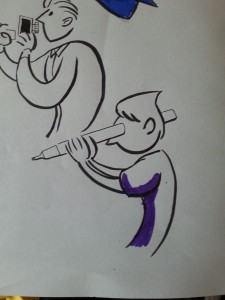 After the group consultation, some composition attempts, and the execution trials, I was advised to not adding too much complicated components in the works to make my main characters stand out more. Simplicity is the best brilliancy I supposed. We’ve also decided that computer scanned watercolor medium can be used to avoid any technical issues.

Next week, the project will be completed, so I have to keep it spoiler-free, but please look forward to my selected concept.