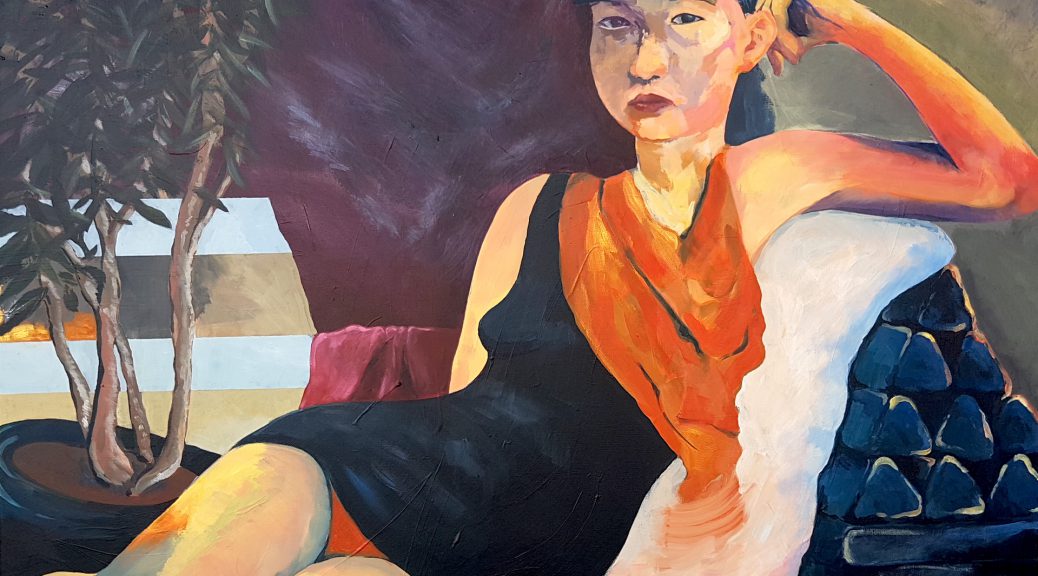 Q1) What is the feeling or the content/ meaning of your painting?Q2) How does the composition/design & brush work support that feeling?

In both experimental paintings, I notice that my compositions are very intimate, almost confrontational. Although there are 2 figures in the setup, my paintings tend to zoom in and focus on one figure. The figure occupies the entire canvas, with their bodies extending beyond the borders of the painting. They are massive yet bounded by the edges. Painting the figures so up-close reduces the distance between subject and viewer and hopefully invites the viewer into the painting’s realm. I wanted to create very intimate and personal paintings where the subject’s form and gaze can be felt.

Following the previous week, I continued to explore the icon of the massive reclining female figure. I hope the painting’s monumentality manages to convey a woman’s strength, certainty and grace. I tried to create a vibrant colour world which employs contrasts and juxtaposition to heighten the different colours.

My first experimental painting had many strong horizontals and verticals. In this second painting, I wanted to explore diagonals and obliques. I emphasised the curves of the figure and made her form even more serpentine. The rest of the space flows and twists in dialogue with the figure. For example, the potted plant on the left was actually flat with a square pot. Instead, I chose to slant the pot towards the figure and round the rim. These intersecting diagonals created multiple ‘valleys’ and ‘peaks’ in the painting which further adds to the slightly off kilter colour world.

I wanted the viewer’s gaze to circulate around the painting fluidly. I tried to do this using both colour, line and form. For example, the figure’s orange scarf is very striking. I applied the same hue in accents in other parts of the painting such as beneath her dress, behind the potted plant and on her thigh. I also used the slanting directional lines and interconnected shapes to direct the viewer’s gaze around the painting.

Following Prof Kelly’s advice, I tried to be more aware of the edges and the ‘zones’ of the painting. During the painting process, I would ask myself what the painting needed to feel open yet resolved.

One thought on “2nd Experimental Painting”