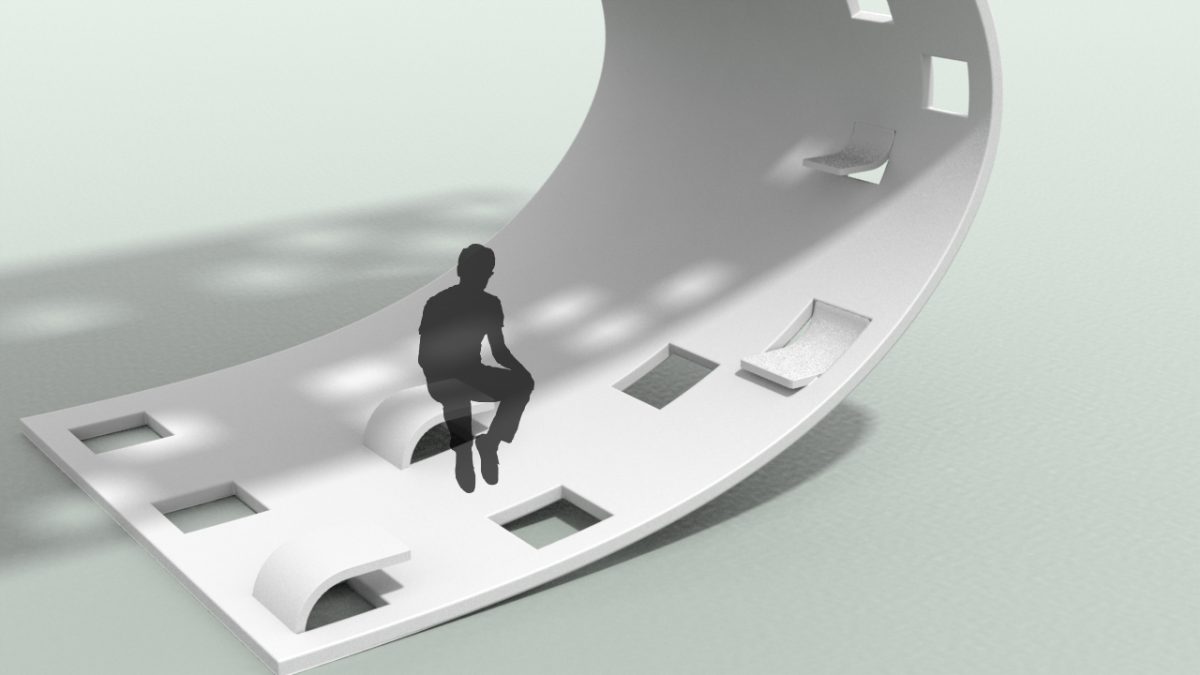 During this interim, we further developed the open ribbon form which we have decided on and researched further into possible construction methods.

In order to visualise the form in the natural environment, we thought about the scale of the form by multiplying it in the ratio of 1:50 (1=10cm).

Alongside deciding on the real scale of the installation, we came up with a few different iterations of the form, exploring mainly on alterations to the base of the installation (where most people would interact with at their height). For example, a form that curves and taper to the ground would provide more void for people to stand in, whereas a form that curves and meets the ground inclined at an angle would provide a slope or protruded surface for people to lean or sit on.

Additionally, we realised that the curvilinear surface for the middle section of the installation can serve as a second deck where people can access by climbing on the grids of the structure.

In addition, to echo the improvisational aspect of the natural environment where we intend to place our installation, we incorporated randomness to the order of the squared grids as shown in the two right-most 3d renderings in the image below.

As we brainstormed on the possible incorporation of functions to the form of the design, we came up with the idea of a open flap that serves as a seat. However we thought that the feasibility of the incorporation is very low as the flap may breakaway from the installation due to wear and tear as a result of human activities.

We liked the idea of the open flap inspired from the dog-ear pages of a paper (eg. in an old textbook) as it evokes feeling of nostalgia and hints on the revelation of what is beneath the surface. As a further development on the open flap, we came up with a curved extrusion that is joined permanently to the curvilinear surface of the installation to serve as both seating and shelving.

We decided on the direction of the curve extrusion by connecting them with an imaginary chain in void to suggest fluidity and continuity.

Some materials we would like to consider with construction would be:

For our future developments, we have looked at two different presentation of architectural design – daring vs cautious. For example, House H by Sou Fujimoto describe clearly defined rooms within a singular continous living space that features two ladies sitting precariously on the edge of a second storey veranda, displaying a daring architectural design. In contrast to House H, we would like to create an installation that is more cautious by integrating safety considerations into our design.

We would also like to consider using Glass Fibre Reinforced Concrete GFRC which we would share more about in our next post. You may read up more on its sustainable quality here.