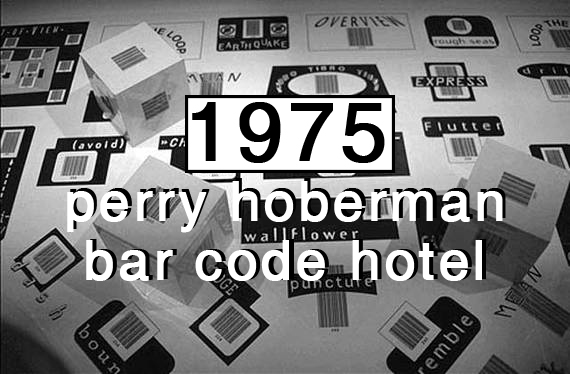 Perry Hoberman is an installation artist born in 1954 who works mostly around machines and media. He has taught in several art institutions and is currently an associate research professor in the Interactive Media Division at the University of Southern California School of Cinema-Television. Hoberman pays particular attention to the interactive character of technology and human beings in his works, namely Bar Code Hotel which demonstrates so which will be of focus in this hyperessay.

Bar Code Hotel is one of Hoberman’s works that really displays interactivity between computer technology and human beings. It is an interactive installation that generates a virtual world using an inanimate object Hoberman was intrigued by: bar codes. Hoberman’s inspiration behind this work are the bar codes he chanced upon while reading cereal boxes during breakfast.

“We are so familiar with bar codes that we hardly even notice them, just an unpleasant fact of contemporary life. They are ugly, plastered onto countless consumer products, defacing the design of packages, books, magazines. And they don’t seem to have any of the magical properties that often get attributed to advanced technologies. They are, however, one of the earliest infiltration of the digital infrastructure into the universe of existing objects. They represent a kind of alternate reality superimposed onto the physical world. This reality is not addressed to us, but instead directly to the computer.” Hoberman

This is so interesting to me because he transformed something often overlooked into something so of greater purpose. Using bar codes as a tool, he created a 3D virtual environment that transcends boundaries of the reality.

The artwork offers a series of objects, arranged on tables, covered with bar codes where a pen-laser manipulated by the participant then activates the codes. A representation screen follows by displaying the result of the “commands” determined by participants that interact with the object. On the screen, a series of everyday objects appear, interact, and die as seen in the images attached below:

For each simulation, an object is activated by a start trigger given by the participant who will wave the pen-laser over a selected bar code on the objects placed on the table. Just to briefly give an idea of the work, attached below is a video of it:

Interactivity in the artwork

Clearly, there is a “reciprocal exchange” between the participants and the work itself  which is essentially what defines interactivity. The participants would use the pen-laser to scan bar codes that transmits messages to the computer screen which elicits a response being the imagery on the screen. When the participants wave the wands in different manner, it manipulates the objects on the screen as it enlarges or moves around which represents the back and forth action and communication in interactivity as suggested by Norbert Wiener in his essay.

Bar Code Hotel demonstrates entropy which is “the process of receiving and of using information is the process of our adjusting to the contingencies of the outer environment, and of our living effectively within that environment.” It is the indeterminacy and unpredictability as results fully depend on participants given that the bar codes can be scanned at any time and in any order. Graphics created then vary between the different groups of participants creating entropy.

This is also being discussed in Roy Ascott’s essay where he thinks that interactive art is, if not, should be behavioural. Outcome of the artwork is never fixed and will change from participant(s) to participant(s). Interactive art is a dialogue and not a monologue meaning the artists give up some control as to how the artwork turns out, leaving it to the interpretation and control of the audience. As for Bar Code Hotel, the outcome of the work I feel, fully depends on the decisions of the participants who determine what object is to be on screen along with its manipulations.

Bar Code Hotel in my opinion, is a good example of an interactive art piece that explores complete interactivity between computer and human beings. The artist created a space where the participants create a narrative that the artist has zero control over. This really demonstrates entropy, the undetermined outcome.