Before I start, I have to say this. Thank you Foundation 2D, for creating such a fun assignment. An assignment that I got to play around with after months of having not touched my tablet. It was tough getting back in touch with a digital medium, but it sure was therapeutic. It was like getting back onto a bicycle after years of not touching it, and wobbling about for several minutes (and in my context, it took at least a few days) before you finally got the hang of it again. 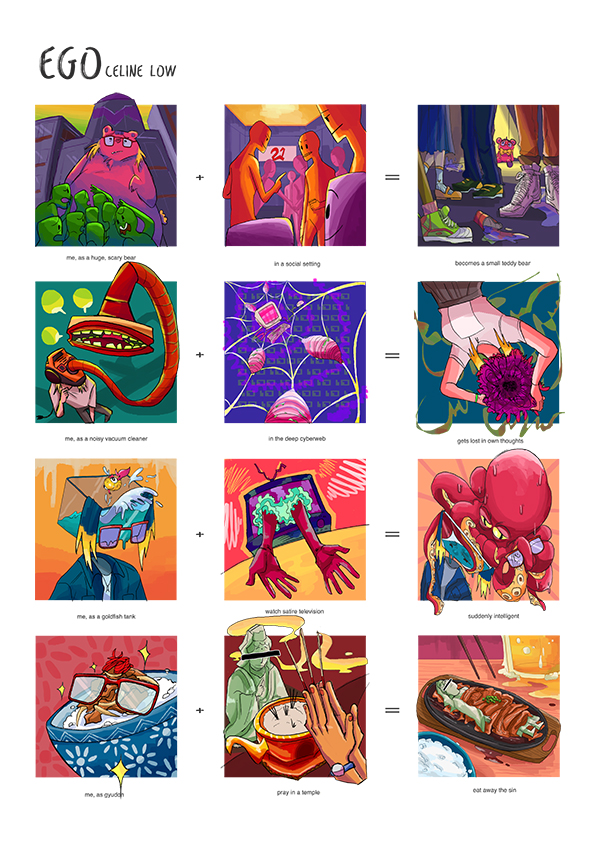 To be honest, I feel like I could have worked on it a lot more and played with colours more than I did. But I already had various colour palettes in mind that I also mixed around with by playing with the Hue and Colour Balance sliders on Photoshop. (Bless those sliders, I’ll give them my life.)

I’ll be honest. I never worked on OSS while doing this project. I had a few references that I spammed tabs on Google Chrome with — mostly colour references to the way people painted with, and then went ahead with consultations and drafting. So I’m basically going to stuff everything into one post this time, unlike my usual long separated posts for each category.

Maybe I’ll talk about my research, first. My three main inspirations are: 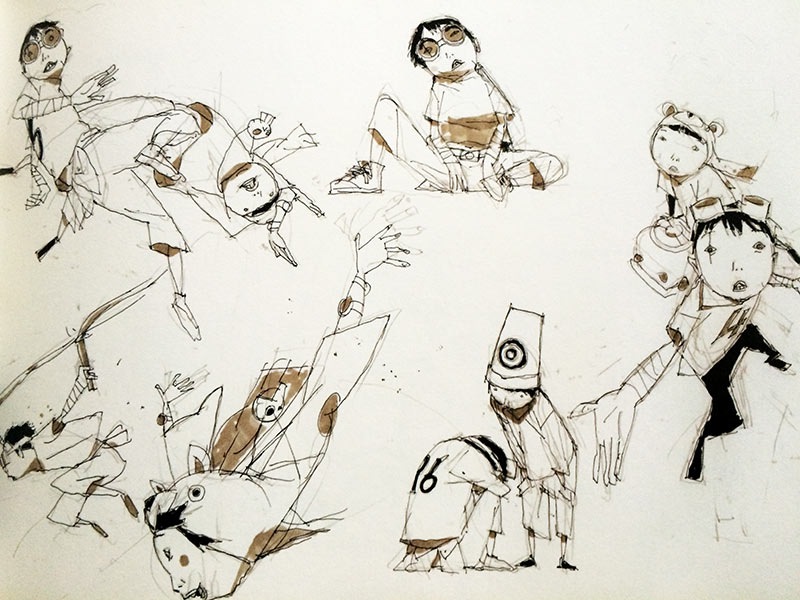 I fell in love with the art of Tekkonkinreet back when I was in year 1 poly. They showed it to us in class for History of Animation, and it has been a big part of my art direction for awhile already. Although I still have not reached that level of confidence to play around with shapes that much, I have always admired the sketchy look that their art has. (Also, it’s a great movie. I even have the artbook.) 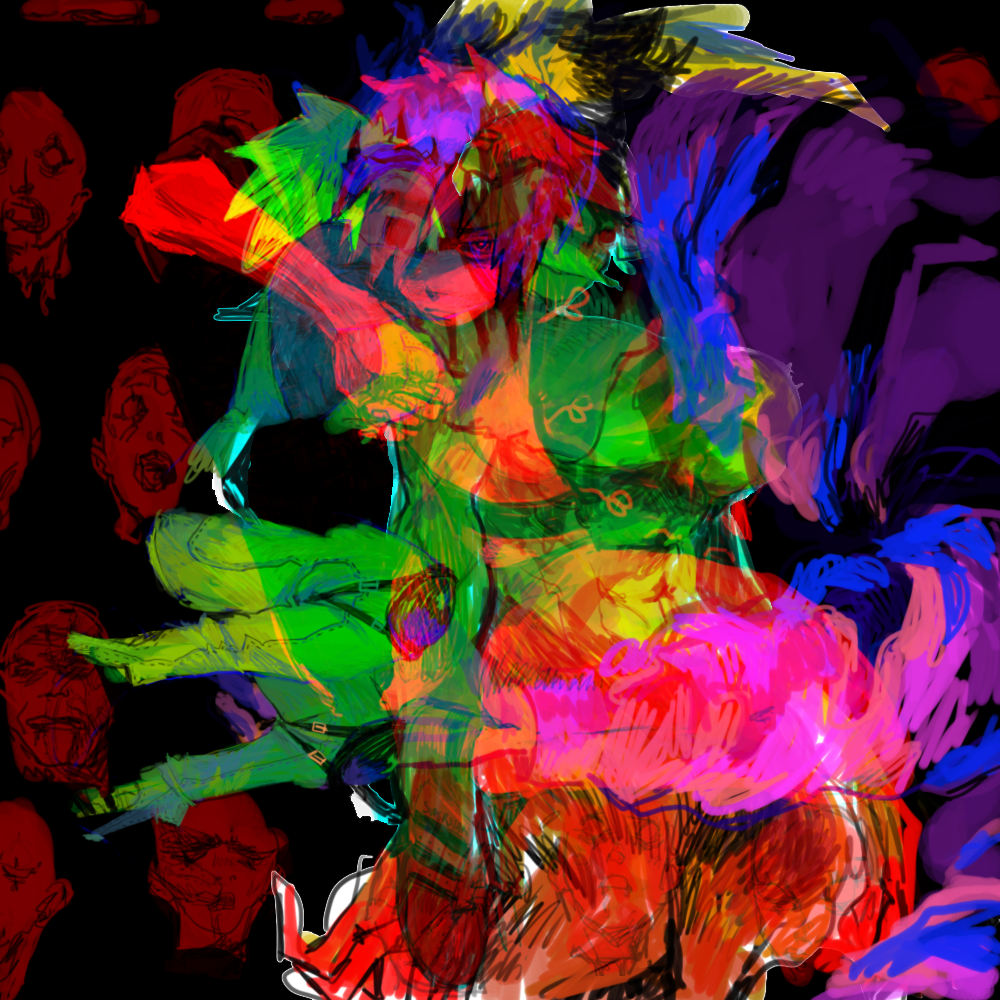 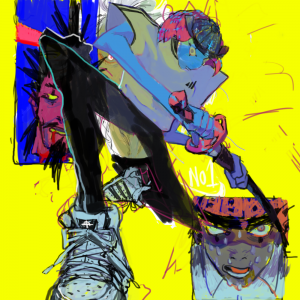 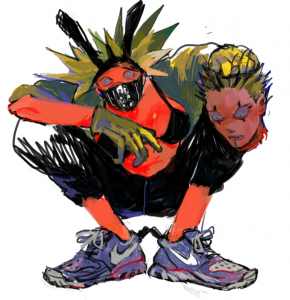 I have a newfound love for colours done like how pupskin has done theirs. Dull on neon seems to be a thing they do which I don’t know why, attracts me a lot. It gives a slightly unsettled vibe to it, and is one of my colour references for my pieces, along with the messy work they produce that still give so much emotion and expression. 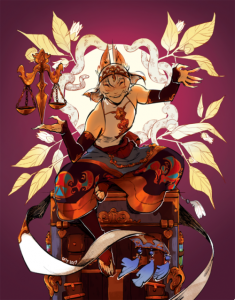 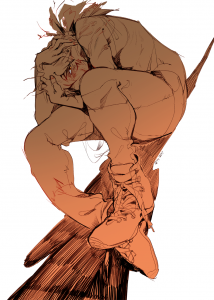 Another one of my artist references for their Neat Line Work just look at that glorious glory beautiful wow amazing. I also referenced the piece on the left for my oriental looking pieces (temple).

Along with hue and colour balance and my general preference for certain colours, I used a lot of this cool website https://coolors.co/ to find pretty palettes to play with. As you can tell, I avoided a lot of pastels, and for some odd reason, had a lot of yellow. 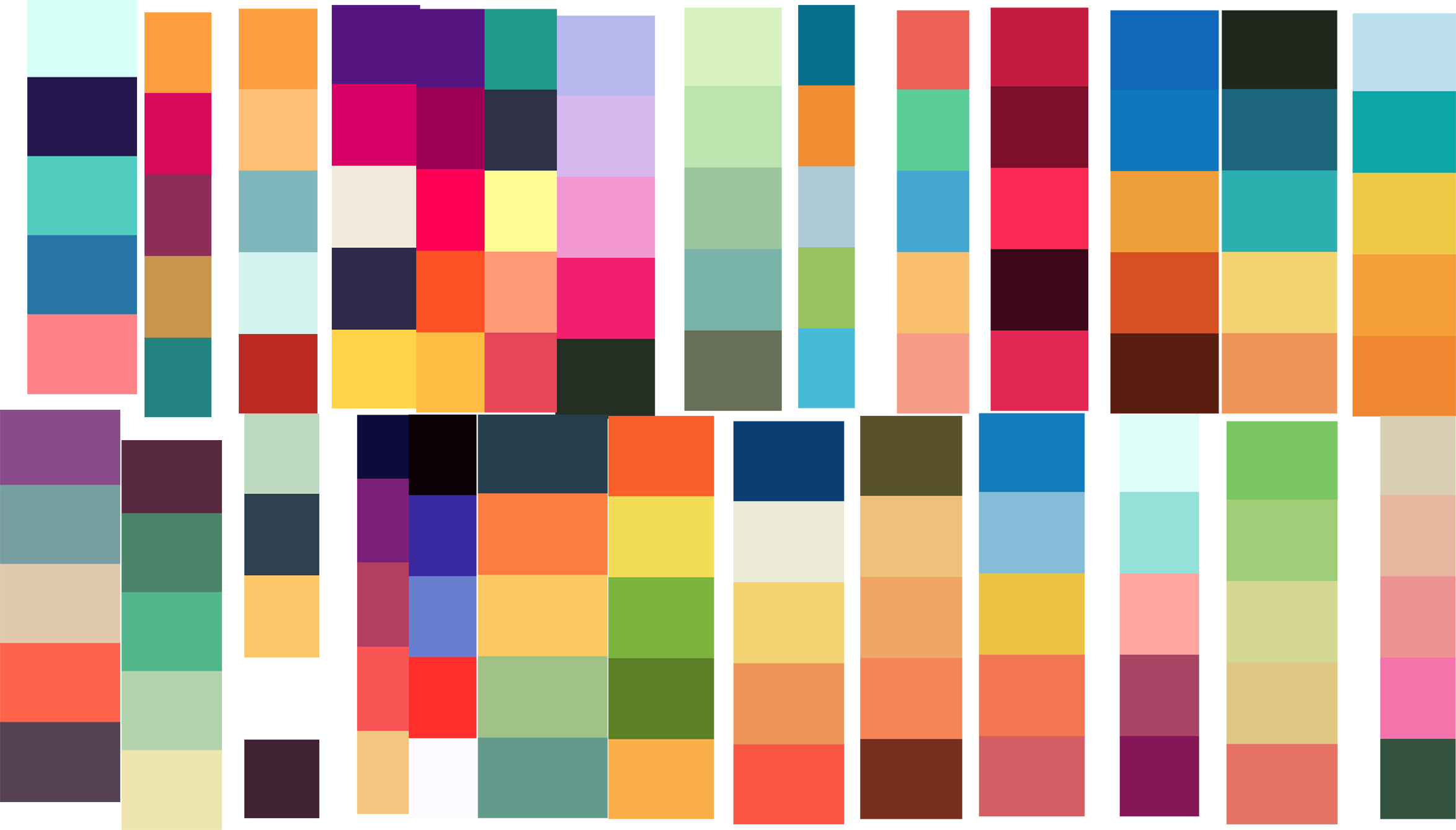 The yellow obsession was probably an attempt to find a good yellow for my highlights that magically became an iconic part of me, besides my red glasses.

Well with my references done,

Here are the individual pieces:

me, a huge scary bear +  in a social setting = becomes a small teddy bear

I wanted to basically talk about how my first impression would always be of a big scary person. Nobody ever dares talk to me, and when I ask friends they usually tell me I’m very unapproachable because of my height and general built (big). But once someone gets to know me, I’m usually just a meek person who is very huggable. Since I was primary school I was often called a teddy bear and till now it hasn’t stop, if I had to be honest. I don’t mind being a teddy bear. But once I’m placed in a social situation, where I have to be friends with people, I tend to shrink away really fast. So imagine a bear shrinking. That’s basically it. And I drew in a lower angle for the 3rd panel because it’s as if I’m reallyyyy small as compared to the first one where I’m reallyyyy big. And because I could play around with drawing shoes. That was fun.

Even though most of the scenes have a dark purple to them, I tried to keep an element bright, and the 2nd panel is seen as brightest with its illuminated human blobs. This is to show some sort of party element to it (social setting). The pinks that I used in the bear in the first panel were repeated in the 3rd panel, along with my glasses and my hair highlights to represent myself.

me, as a noisy vacuum cleaner + in the deep cyberweb = gets lost in own thoughts

I’m pretty talkative amongst my group of friends, and I also take in a lot of information from wherever I can. In a sense, I’m a naive individual, if you could still called a jaded, irony-loving person naive. When introduced to the darker side of the internet, I tend to go too deep, and find many weird theories about things, or weird thoughts about others. And that usually ends up with me too caught up in my own thoughts about things. I basically became a vacuum cleaner that sucked itself. What a sucker. HAH.

I went with greens and purples for this set, with a tinge of warm colours here and there as a contrast.

me, as a goldfish tank + watch satire television = suddenly intelligent

I have the worst attention span. I zone out all the time, and my brain is mostly empty if I don’t put in the effort to have something in there. How am I alive? I don’t know. I like my brain empty though. They always say goldfish have a 3 second attention span, and I placed one in a too-huge tank to basically represent me. Empty and dumb.

I have also been watching tonssss of shows that question society, and whenever I do that I tend to binge watch them. Like you know, watch 10 seasons of it within the past 3 weeks of school. And that keeps my brain going. It’s suddenly stuffed basically, and I now have this stupidly smart octopus in my teeny tank brain.

I went with lots of warm colours for this one to counter the water blues. My glasses and hair are still there. I gave the TV typical purple/green colours for a more ghastly villainous effect, and to show its psychedelic effects when you binge watch too much and lose track of reality.

First of all, as some sort of respect to the fact that I do pray to this god, I censored her face off. I think it’s kinda funny still. I’m probably a bad kid now going to hell. Sorry Guan Yin. ):

Ever since I was a kid I was told never to eat beef. It was part of my religious practice as a taoist who prayed to Guan Yin, and I never questioned it and was even afraid that eating it would result in me exploding. (Don’t ask me why, kid me was convinced.) I ate beef once because nobody told me lasagna was made of beef. I cried really hard.

But as I grew older I asked my parents why, and they eventually allowed me to for the convenience when eating with friends. (It used to be so strict that I couldn’t share barbeque pits that had beef on it. No contact with beef at all, nadah.) Eventually it came to a point when I was in Japan and we were having food at a gyudon restaurant. And that was my first time eating gyudon, AND I FELL IN LOVE. I have yet to shut up about beef bowls. Ask my friends.

So now I live my life in sin. HAHA. Joking. I still pray at temples, because I still didn’t mind being in a religion, but I had my secret love for gyudon for at least 2 years now. Yoshinoya doesn’t have the best but it’s good enough.

Here’s where the oriental bit of colour comes in. There are basically a lot of reds in setting and in meat and ginger. Tiny bits of cool colour (bowl, Guan Yin) help to balance it out. In this piece, I did not specifically put myself in the outcome of it, but I feel like it works, like as if I’m fake Guan Yin and I deserve to be eaten (lol.) But I kept with having more yellows throughout my four sets of three to imply my highlights.

Well that’s basically it. I loved every bit of this project, and I felt validated for using weird wiggly lines in my pieces by Shirley. I’m glad we had this to buck up our painting-y skills, really. I hope presentation day will be good to me, because it has been a tiring few weeks thinking that my art sucks.