Semantic satiation (also semantic saturation) is a psychological phenomenon in which repetition causes a word or phrase to temporarily lose meaning for the listener, who then perceives the speech as repeated meaningless sounds.

In this video I am in my room, writing in my journal, and as I continue to write words, they start to lose their meaning. The music playing in the background is a song called ‘good day’, played at a slower speed, creating a slow rhythm and eventually, a sense of distortion to the perception of time. There’s a sense of dissociative blurriness as the VHS filter glitches every so often, with its red, blue, white, black.

A room is a safe space. The music conceals yet shows the confusion that I have collected over my year in university. The writings are what I want to be, but cannot achieve, because OK has lost all of its meaning.

I have never dabbled into the world of art, not in the way most people have. I went into art with a lack of deeper meaning, and have never known art in its contemporary form. As I stare longer at meanings that people try to bring forward, the repetitiveness to causes gets lost within me. In a sense, this video selfie would be the workings of my mind as I process how people view art. I realise that I am not that individual, but I am also the individual. I realise that what I show — a person who can speak, who can smile and write coherently – is not like that within the self, and thus creates that alternate identity. I lost myself in coming to the realisation that art was not what I thought it was. I concealed myself with the idea of coherency in my own words of reassurance, but when you look long enough, the depth of it is gone.

As deep as I may sound, I wish to create art for my, somewhat shallow, individual. To present what I see of the world, from what I perceive which has lost its initial meaning. To reconstruct things in what my mind was able to pick up, and to better understand other individuals, I evaluate them with what my overactive, overthinking mind can comprehend.

tl;dr, I’m dumb, and I wish to understand people better but it’s hard because people all talk like ^ until I also cannot understand. Help. 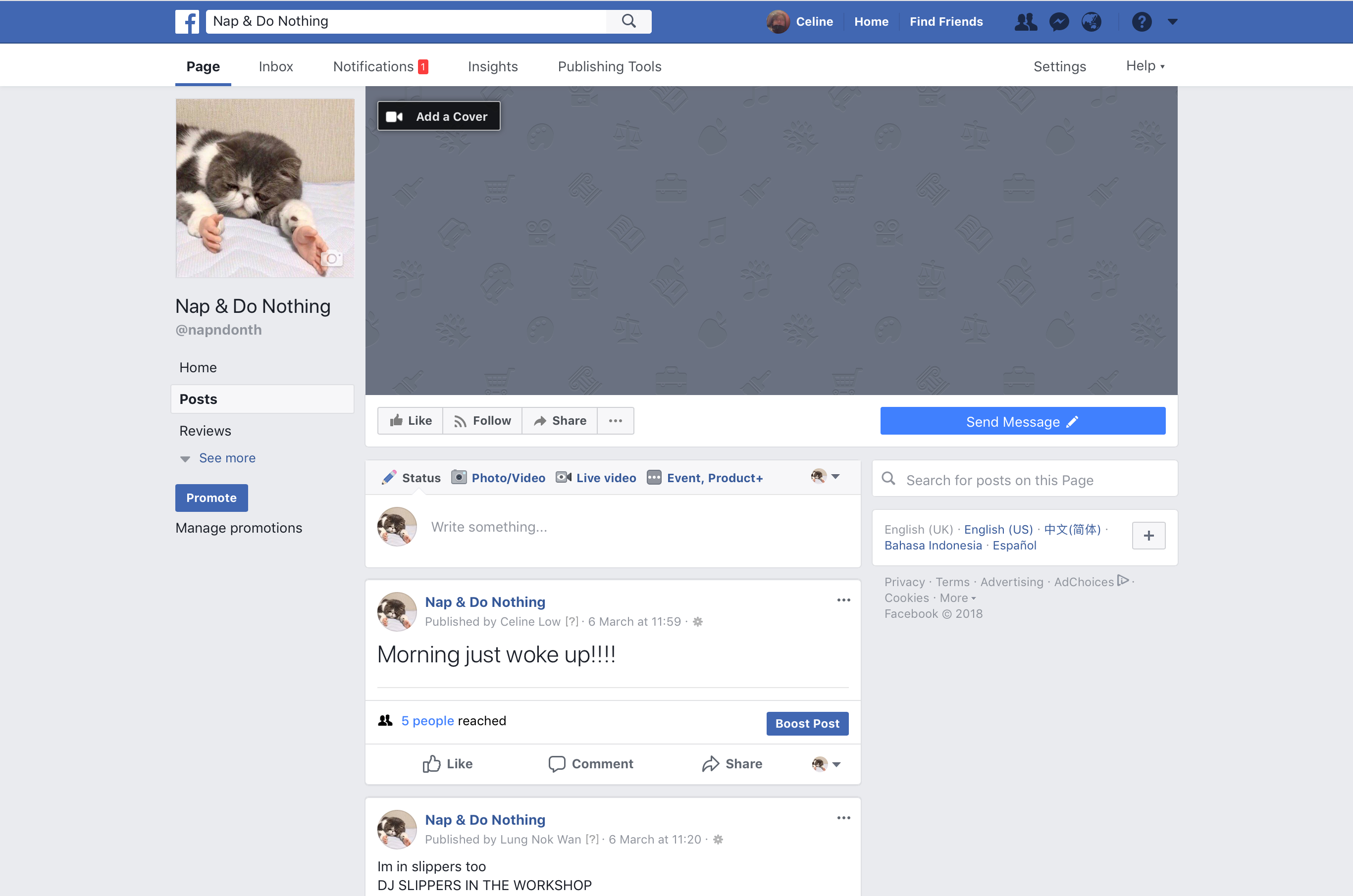 Our page: Nap And Do Nothing.

As observed, all of the group members were more superficial about sharing, while half of us were unwilling to post pictures of our faces, opting for videos and pictures of what was around us instead, or the faces of friends whom happened to be around us. We were also kept “anonymous”, choosing to not write our names, using the page’s admin anonymity to hide behind. (We could, however, look at who posted the various posts, with our administrator roles.) Many of our posts were updates about what we were doing, things like eating, going to the toilet, or sleeping. These were all mundane activities, and there was the occasional talk about spending time with a friend. Many of these posts involve things we have already spoke about to the people around us. There was also the rare thought about something that had happened, and a comment that was empathetic in relation.

So this micro-project is about being a super-participant. So what is super-participation to me? I’d like to think it’s about the concept of over-sharing, and about the need for transparency in order to be accepted and validated as a whole being. I thought it was a very interesting topic to touch on. When we were kids, we were often told to “not talk to strangers”, and since that was inevitable with the rise of the Interwebz, parents compromised. Do not give unnecessary information, do not put your feelings out there, do not put your real name. Basically we had to keep our private details away from this public space.

Of course, this changed over time, and for the past few years, many internet celebrities have put every single little detail about themselves onto social media, be it sexuality, transitions into new lives as progressive adults, mental health issues, relationships and its details, etc. Some try to keep it slightly more personal, only having mutual friends on the web know about their personal lives, while some just let the whole world know about what they think about a certain thing, or what they are going through with the certain point in their lives.

The three of us decided to use videos to glitch, walking around ADM and taking videos of the most random things. We tried taking still videos, and also very jumpy cryptid videos where there were many motion blurs. After taking these videos, and also looking like we weren’t that right in the heads, we each took our own videos and edited short clips on our own, creating our own form of glitch, while also making a gradual slip of sanity when compiled together.  Throughout the final video there is a sense of destruction in the mind, and also in the video itself. 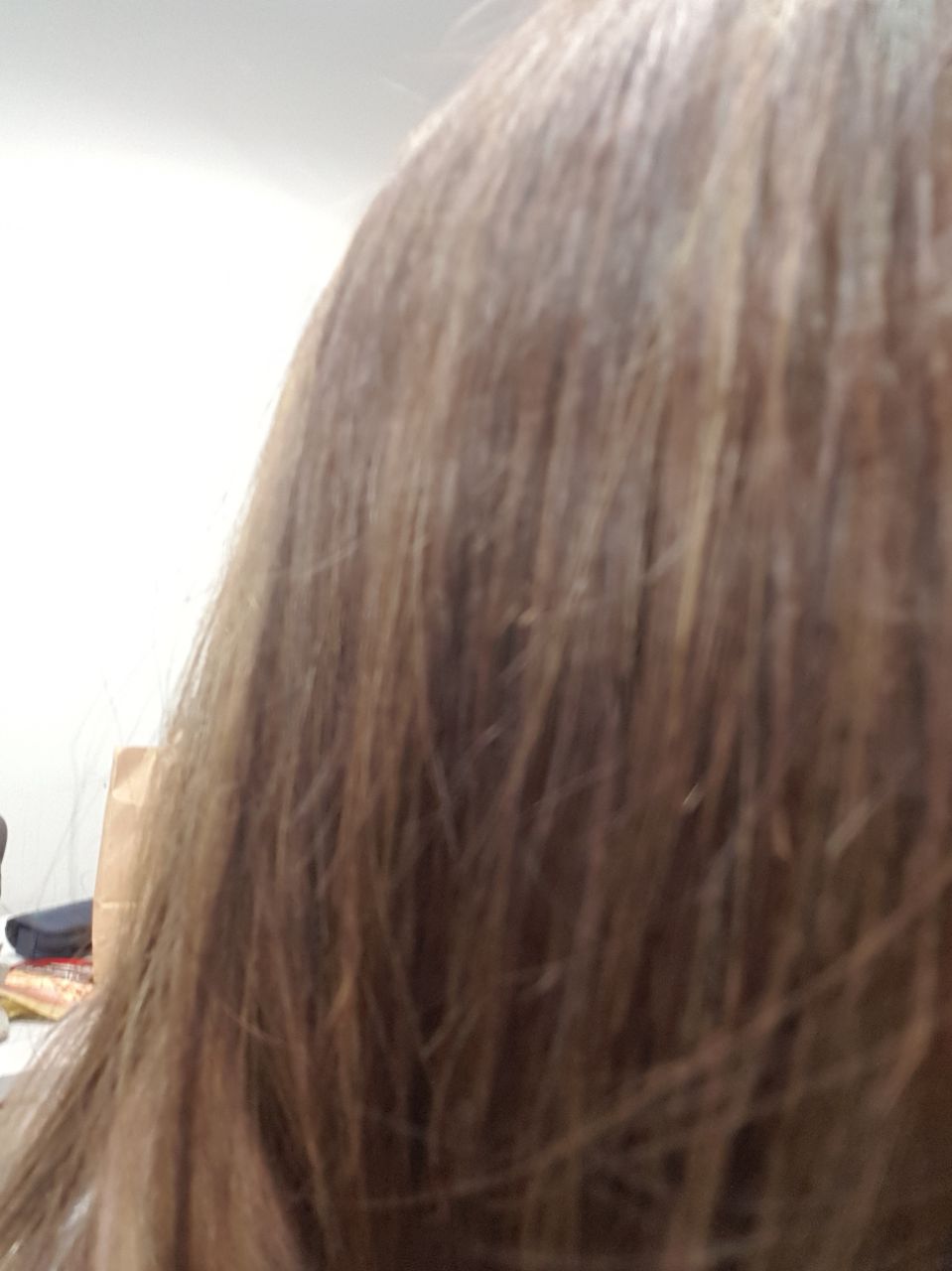 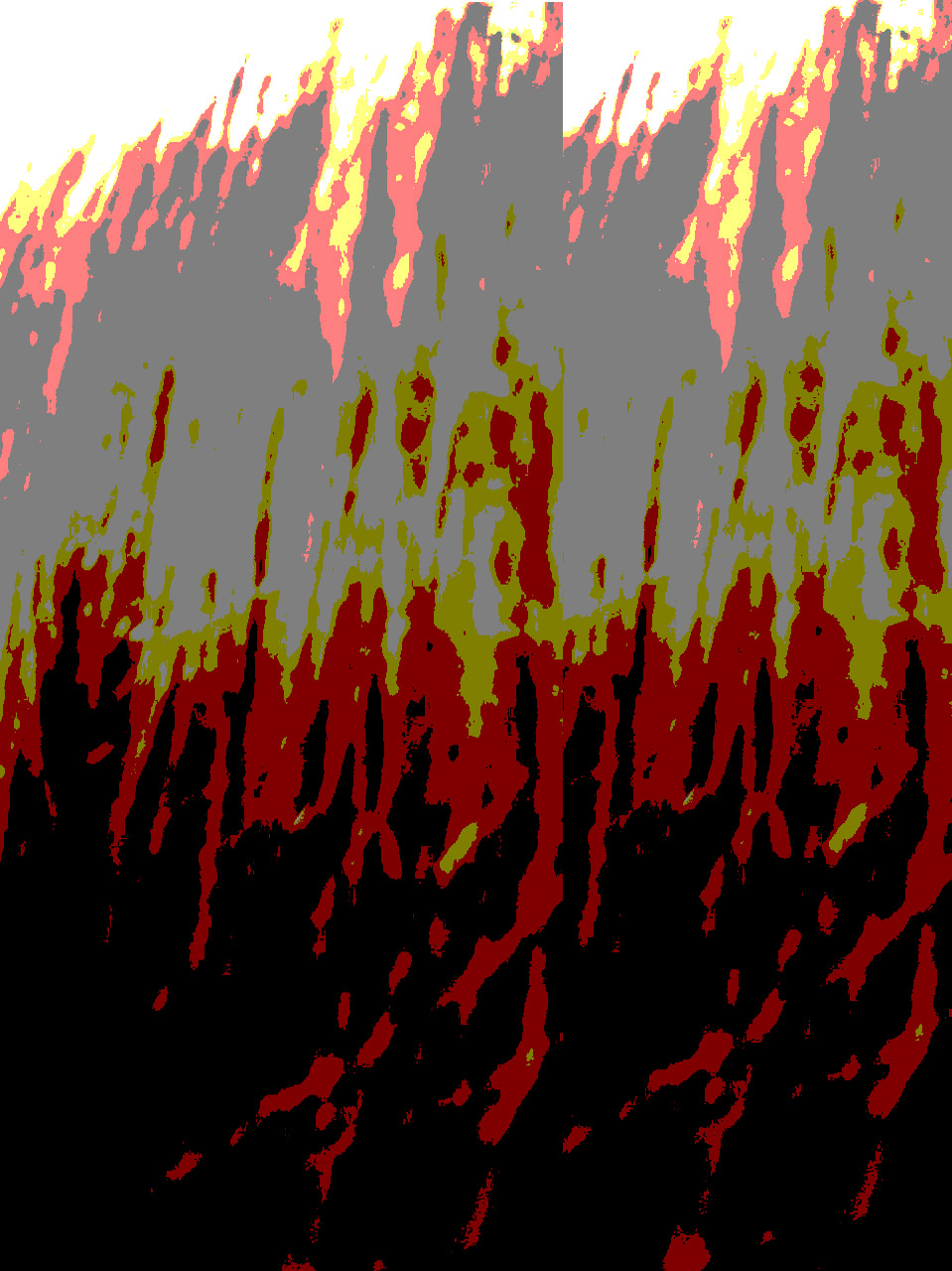 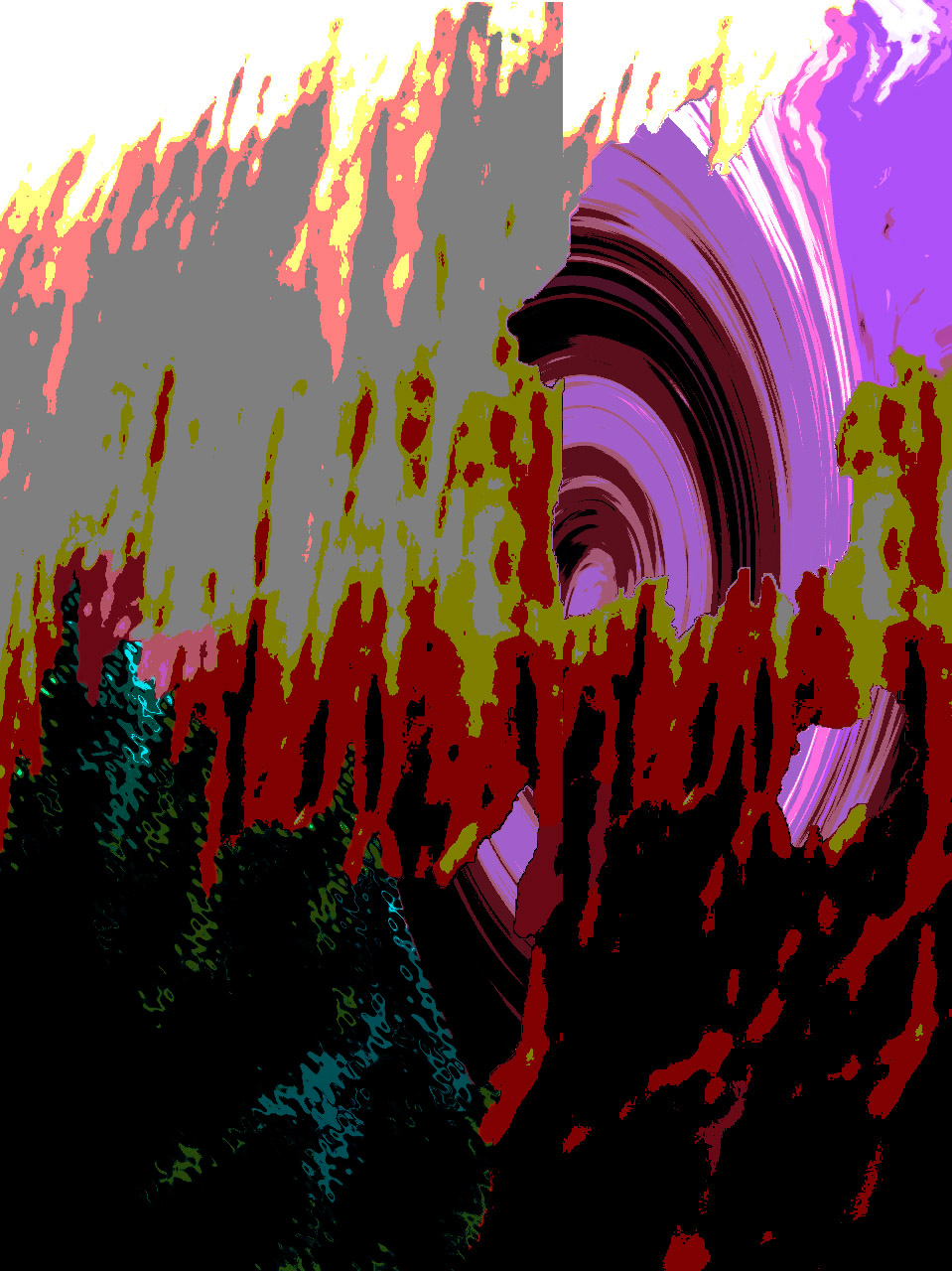 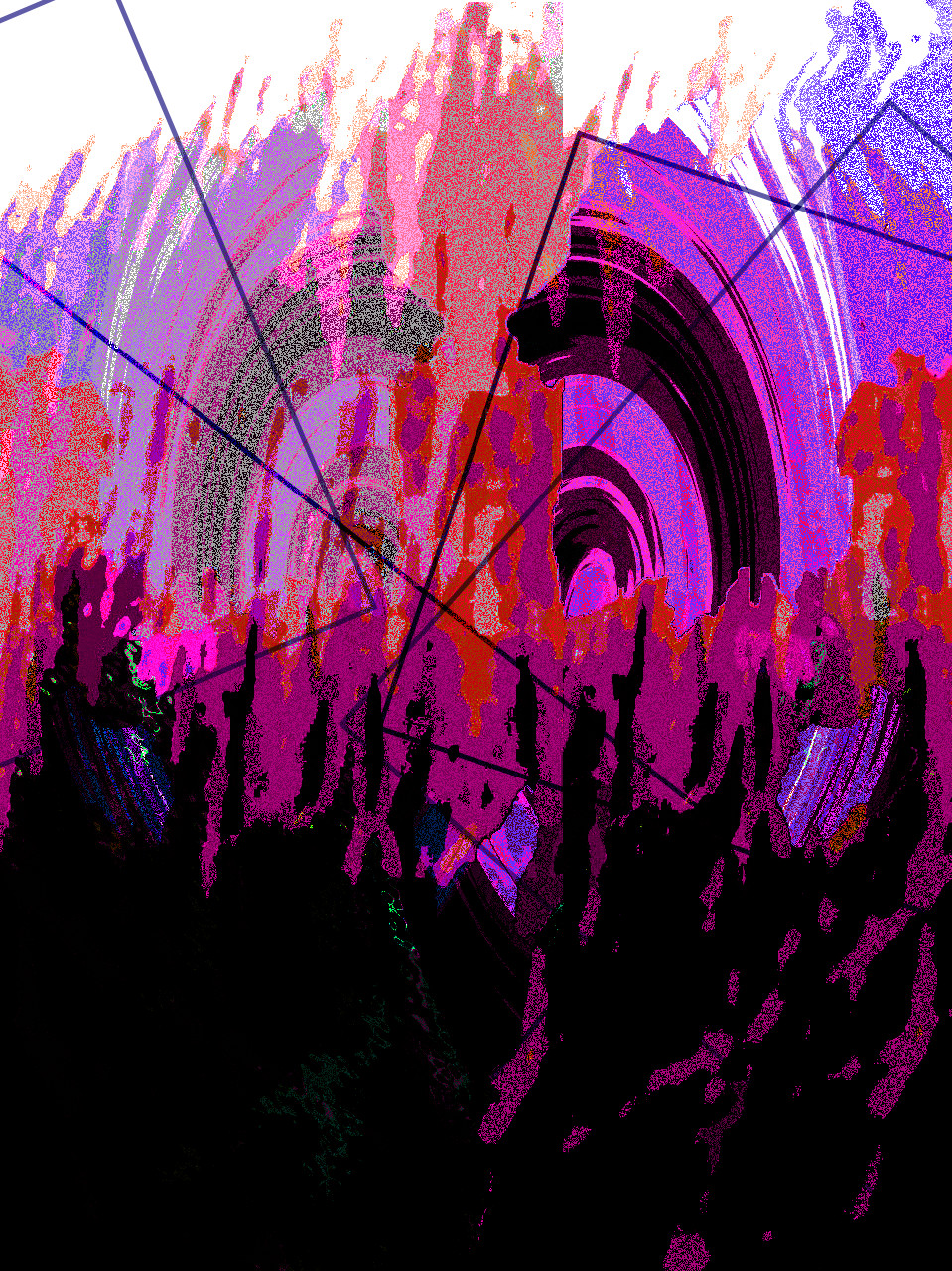 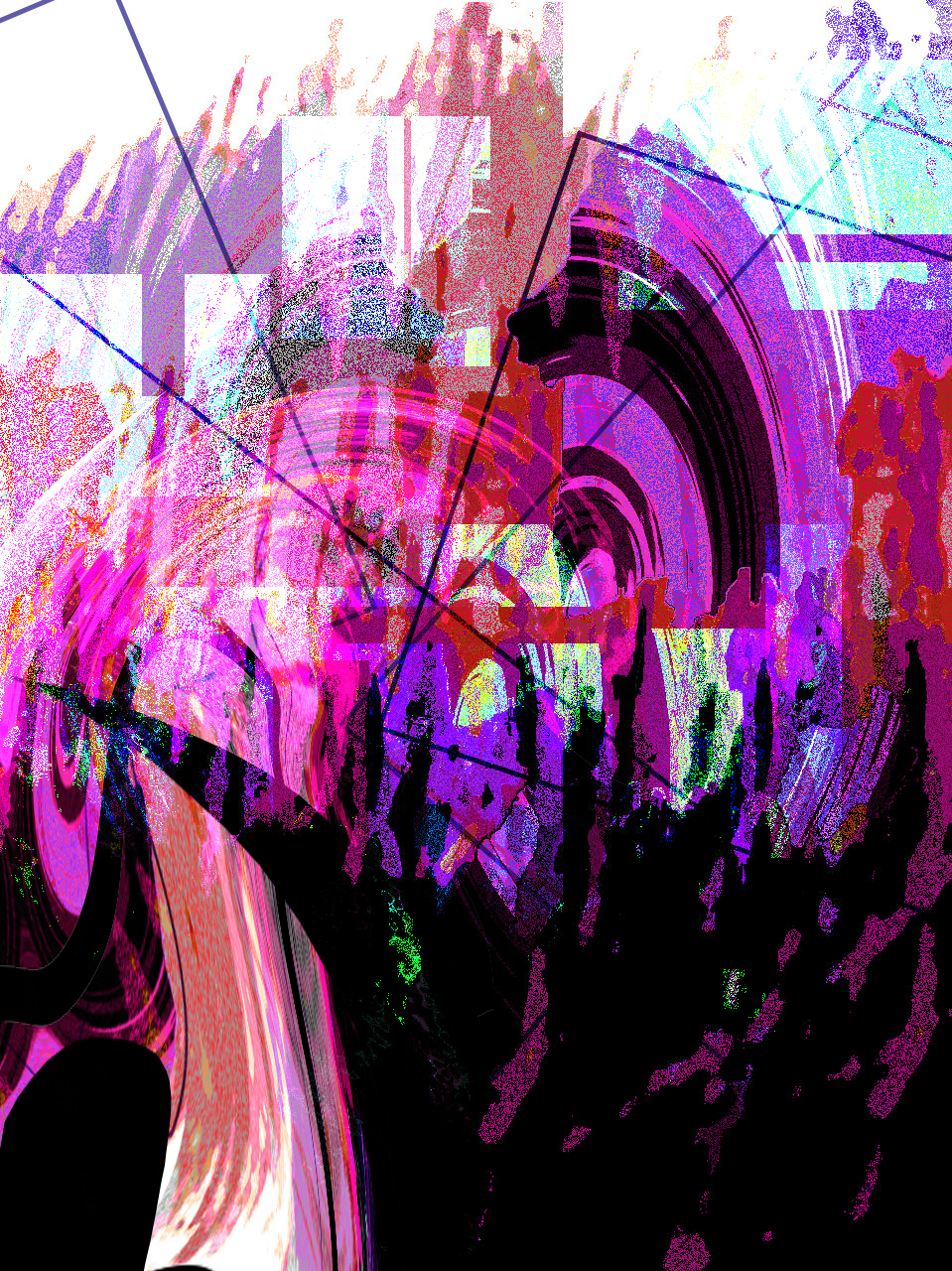 Describe how this process of collective image creation and decomposition creates a glitch transformation.

My group members were Nok Wan, Amanda and Minjee. We were told to create a glitch using any sort of method available, although most of us used photoshop, creating the effect of glitch in the images shown above.

Creating this piece was an unfamiliar experience to all of us: we weren’t computers ourselves. Our first round of edits usually ended up very safe. An example would have been my own edit of Nok Wan’s image, where I was unwilling to distort her face for fear that it would ruin a Masterpiece. We didn’t want to make it seem unrecognisable right from the start. I started off with adding on by duplicating parts of the image, and adding rectangles of colour that seemed like it was a glitch. I added a noise layer as well, as glitch was commonly associated with heavy noise, in my perception. Some others would also change the colours of the image, rather than affect the image itself, to colours that were not normal for a human to have (cyans, purples, etc.).

How is each transformation creating a new form of its precursor?

I realised that everyone had their own ways of creating glitches. For me, I loved the idea of repetition in glitch, like when you dragged a window and your computer started lagging and everything started to just become an animation broken down frame by frame, and then melded together.

From the above images, you could slowly tell that the only thing visible from my original image was the little streaks of darker hair becoming just some sort of texture — you could not tell that it was my hair at all, if you did not know what the original image was. It became some sort of psychedelic poster you would see on the streets, probably just had to smack on some text. The colours were very bright and vibrant, and the contrasts in colours used were very drastic. Which I actually liked a lot to begin with, because in my opinion pastels were an overrated thing. Nothing wrong with pastel glitches those are cool as well, but hey, I just basically find the colour palettes used in typical glitches really cool.

It also doesn’t help that constantly resaving jpegs can basically fry a photo. The constant edits take a toll on the resolution and I actually find it really pretty. Never found a better self portrait, man. :’-)

Link to our video:

Sitting at two different ends of the ADM basement, we wanted to make it seem as if we sharing a common space despite being in two different locations. Having had a long day of classes, it was a good time to ‘share a drink’ and what better way to share a cold can of milo than through the internet?

WHERE
ADM basement
Amanda: Outside, at the black benches
Celine: Green tables near 3D room

WHAT
Share a drink, help to open drink, have a conversation and eventually finish the drink!

Amanda and Celine are seen being able to pass a can of milo through this Third Space, despite not physically being in the same space. This allowed for them to share one of our favourite drinks: Milo. Amanda is seen being unable to open the milo can early on in the video, and passes it to Celine, who opens it for Amanda and returns it to her to have the first sip. They then attempt to have conversation verbally, occasionally high-fiving and hitting each other on the head. Amanda also attempts to pat Celine’s head in apology for hitting the latter’s head. Towards the end of the video, Celine asks for Amanda’s watch, so she could look at the time and stop the video. Successfully, they end the conversation and finish their one can of milo through facebook live. What a concept.

It was an exciting maiden experience. Even though we were not actually near each other in any way, there was still that form of connection that certainly made the whole interaction very new and refreshing. Every little successful connection made us elated, and we would burst into laughter. Even failures were met with laughter, and we would then try again. It was a lot about impromptu communication as well, where we had to voice what we wanted and work as a team to achieve it. Overall, it really felt like we were adding a new layer to ‘video-calling’, like some sort of Virtual Reality chat but with a new sense of touch and share added to it.