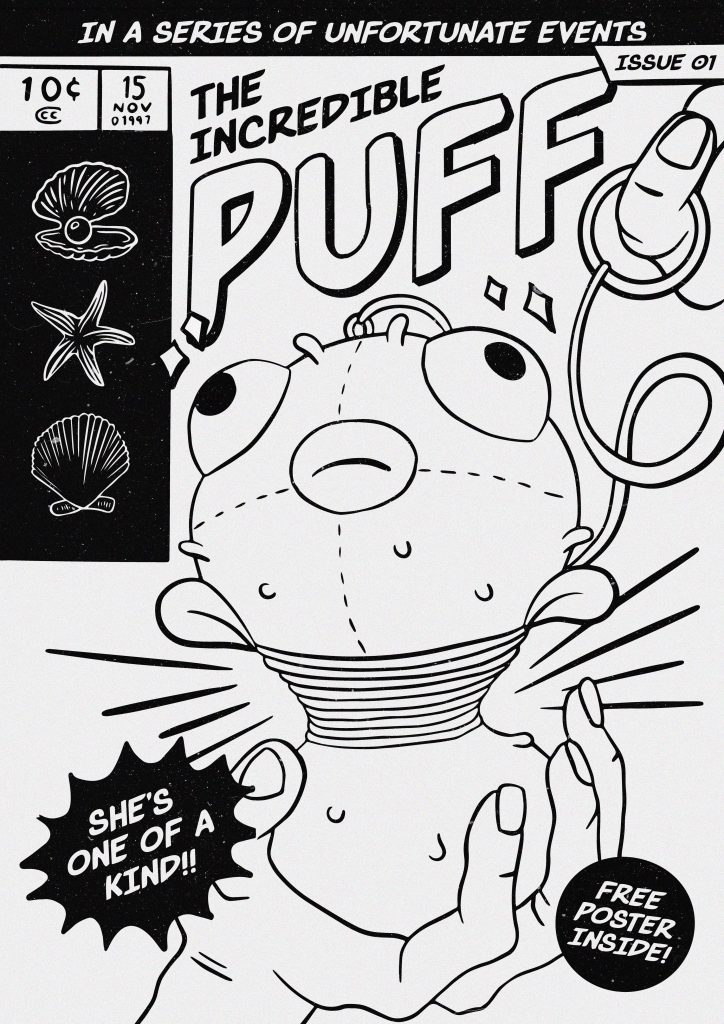 Here, is I, represented by a comic book cover of a toy pufferfish in discomfort.
My self portrait illustrates a good number of negative traits and insecurities I have about myself. It is illustrated comically, because on the surface I tend to give people the impression of being very ‘happy go lucky’ or… just… being a comical person. (This definitely doesn’t come across in class hahahahaha).

A toy, not a real fish:
Imposter syndrome! I’m not real.

Bulging eyes, thick lips:
Bulging eyes because the fish is exploding, but I also do have larger eyes and fuller lips than the average Singaporean Chinese. Heh

Rounded puffer spikes:
I’ve had several people tell me that their first impressions of me were that I seem to be unapproachable, but once they got to know me, I’m quite… harmless.

Comic book cover:
Teri’s interview with me turned into a life-storytelling session where I just went on and on and on about my very visual/graphic stories. Hence I am a comic book, not a storybook, not an auto-biography.

Free Poster Inside!:
Because who doesn’t want to just be famous and have ~no problems~ other than worrying about looking bad on a poster that people hang up in their rooms! Not me!

Pearl, sea star, pretty shell:
Everything that I want to be. A pretty shiny star.

Sparkles around eyes:
Either: I’m so beat up I’m seeing stars, or to symbolise my tendency of envying others.

Hand holding puffer:
Either: This poor, poor, puffer, is so obviously beat up but is still being presented as perfectly alright! Yeah! This is fine! I am fine! Or: Sometimes I just want to be held, ya kno…

I pretty much have all the negative traits/insecurities about myself etched in my mind, so it was easy to head straight into ideating and sketching those ideas out. I believe I was scrolling through Behance for an art style inspiration, when I came across an image of a pufferfish and it just felt… perfect. Like when you come across an item of clothing at a store and you just know you have to get it.

An idea I played with was with a pufferfish sitting in Cinderella’s glass shoe, symbolising my imposter syndrome. If the shoe fits, I sits. Another would also be having a hand squish the fish instead of a rope/string. I also tried out different looks for the puffer. 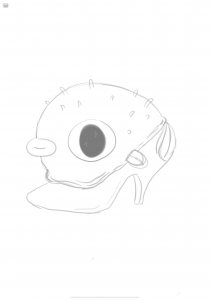 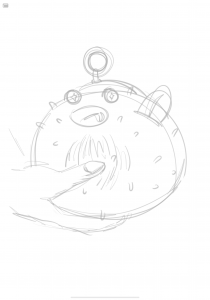 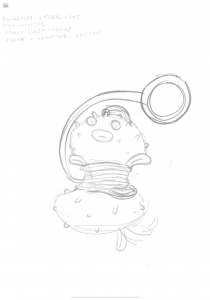 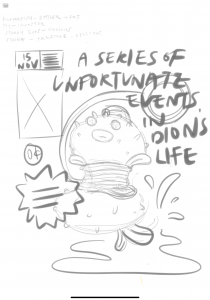 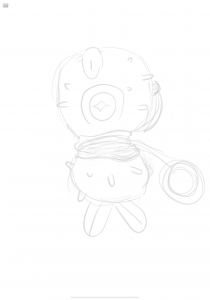 For consultation, the main feedback that I got was just to make the pufferfish look like it was exploding more by making the head bigger. I did make the head bigger, and I also thought of adding fat rolls to the puff, but I didn’t want the illustration to be overdramatic/ too obvious (with the fat rolls). 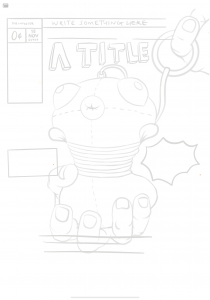 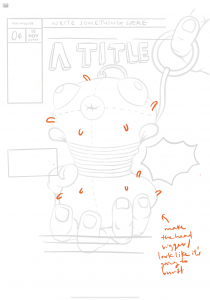 I moved the illustration back and forth through Procreate and Adobe Illustrator to vectorise, add text, and re-adjust the composition. 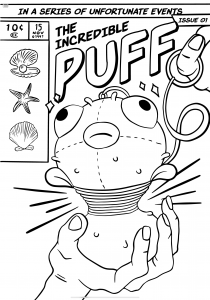 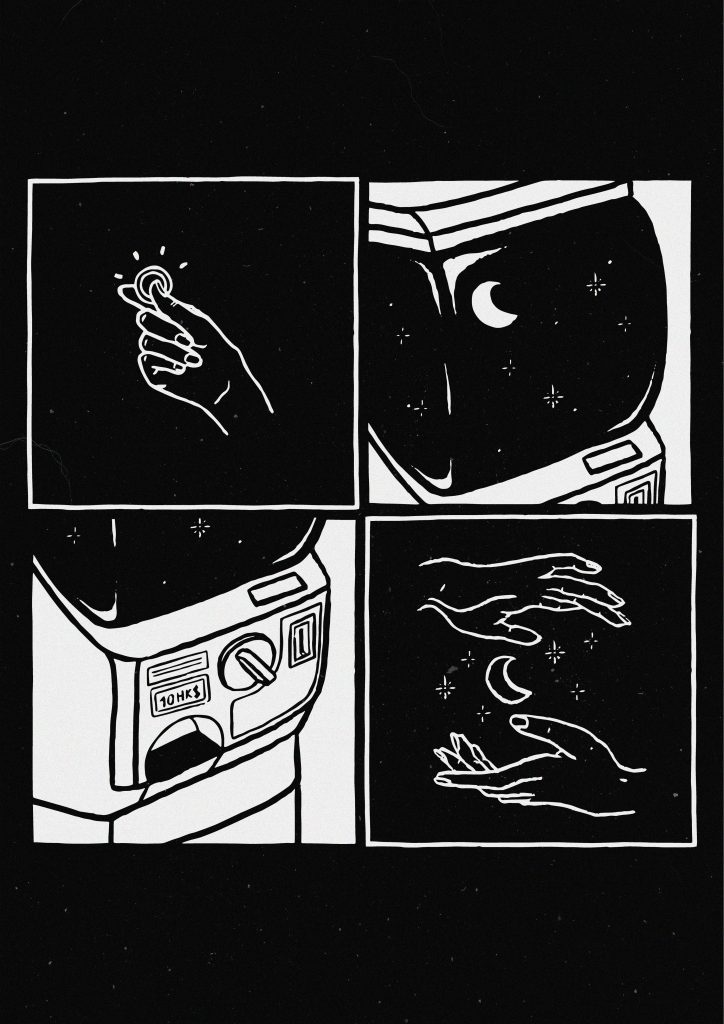 Here is Teri, in a grid.

I asked Teri a million questions rather than just three, so I won’t bother with a whole transcript. I also went through several stages of interpreting her to end up with the elements that I have, hence I’ll go through the relevant information I’d received and referred to whilst interrogating Teri about her life.

“I would definitely rather save to spend on travel and invest on new experiences than to spend on other things” — Teri, 2020

Square 2: Vending machine of a galaxy
The galaxy represents how Teri likes to see the world, likes experiences that make her feel small, and also how I really don’t know much about Teri much like how we don’t know a lot about space. The galaxy represents how Teri would rather spend her money on an experience that makes her feel all those ways rather than on capsules (objects).

Square 3: Vending machine coin/ receiving slot
Teri puts her HK$ money in, and receives something random from the machine!
Other than representing Teri’s expenditure, the machine also represents the part about not being able to predict her.

Square 4: Galaxy in hands
Teri’s Got The Galaxy

And finally, everything is in a grid because: Teri has nothing on her Instagram, and these are the bits and pieces of what I can make up of her.

While I made Teri explain the whole scenario of her travelling solo for the first time (in general) from Canada to New York all by herself, what really caught my attention were the last three words that she used to describe her takeaway from the experience.

From then on I knew I wanted to illustrate something with growing balls, because that was the most visual, metaphorical item she had given me. I didn’t want it to be rated balls though, because Teri is quite the innocent (or at least on the surface).

From then on I just kept thinking of what other ways I could represent balls. I randomly thought of a gum ball machine, then a vending machine of capsules. Perfecto!

I played around with different ideas like illustrating her experiences in the capsules, turning the capsules into takoyaki (one of the foods she likes), or showing a collection of her balls (because I had asked her how many balls she had before her experiences, now, and how many she would like to have by the end of her lifetime – the answer was 3, 6, 10). 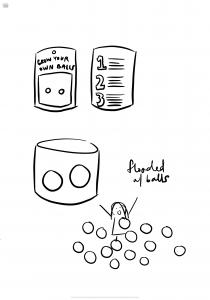 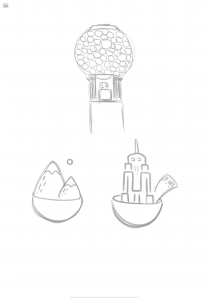 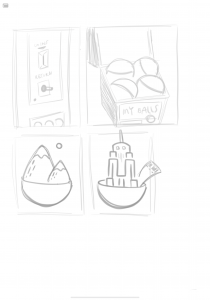 Then I thought about illustrating a random grid of all the random things I know about her, because I got frustrated that everything I knew about her was all over the place. For example, she brushes her teeth in the shower, she’s insecure about the scars on her legs from excessive mosquito bites, the dachshund is her favourite dog breed of all. 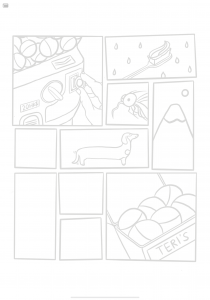 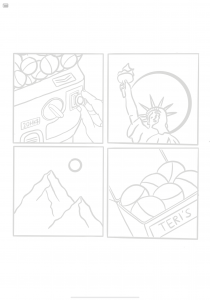 Then I felt like everything was too random, and the one with the vending capsule machine had a whole story in its own square, so I expanded on that, and tada! 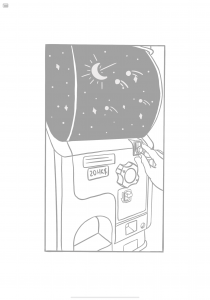 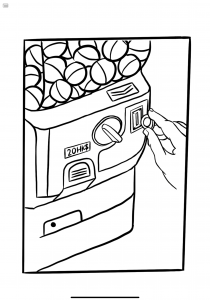 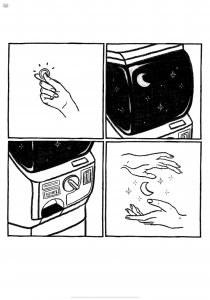 It’s been a fun first mini project. I took this course up because I’ve been wanting to pick up illustration for the longest time but have never gotten around to practicing it. Then I thought about giving up on that idea, but then my mom got me an iPad (thanks mom) and I felt the pressure of making full use of it… so here I am. Now I have something to force me to learn the skill and it’s been fun. The last time I illustrated anything was in vectors and in my first year.

Also this assignment made me realise how much I don’t know Teri at all, even though I’ve known her for 2.5 years. What fake friends we are!