Starting the project out, I actually thought of finding out what else Sunshine Plaza is known for because from an art student’s perspective, all I know about the place is for its printing services. And so that’s the direction I first went ahead in. However, after doing all the research, I realised that the printing services is exactly what makes the site unique.

There is very little information available online about Sunshine Plaza. Searching high and low for anything about the site, these are what I managed to find:

According to real estate websites PropertyGuru and srx, Sunshine Plaza is:

I, of course, have chosen to focus on Sunshine Plaza Shops, because it is the only publicly accessible area and I also have no access to the private residence and it doesn’t make much sense for me to go about investigating offices.

According to the ‘unofficial website of Sunshine Plaza’, when the site was built, the City Developments Limited appointed DTZ as the main marketing agent for sale by private treaty.

According to the real estate sites, Sunshine Plaza is:

With some simple primary research;

*Estimations according to Google Maps

Close to many tertiary campuses

According to TheBestSingapore, Sunshine Plaza is the “biggest printing hub with the largest number of printing shops in Singapore”.

Its ‘top four competitors’ are:

According to the ‘unofficial website’s’ online directory, there are a total of 16 printing shops (information is outdated, has to be corrected by primary research).

Also noted on the ‘unofficial website of Sunshine Plaza’ itself is:

Apart from Victor’s Kitchen that recently opened a new outlet at Chinatown Point in 2015, all other outlets are independent.

So the question that lies from here is:
What do people really patron Sunshine Plaza for?

I conducted an online survey, targeted towards people have patronised Sunshine Plaza before, so as to find out what is/are the main reason(s) people patronise the site for. 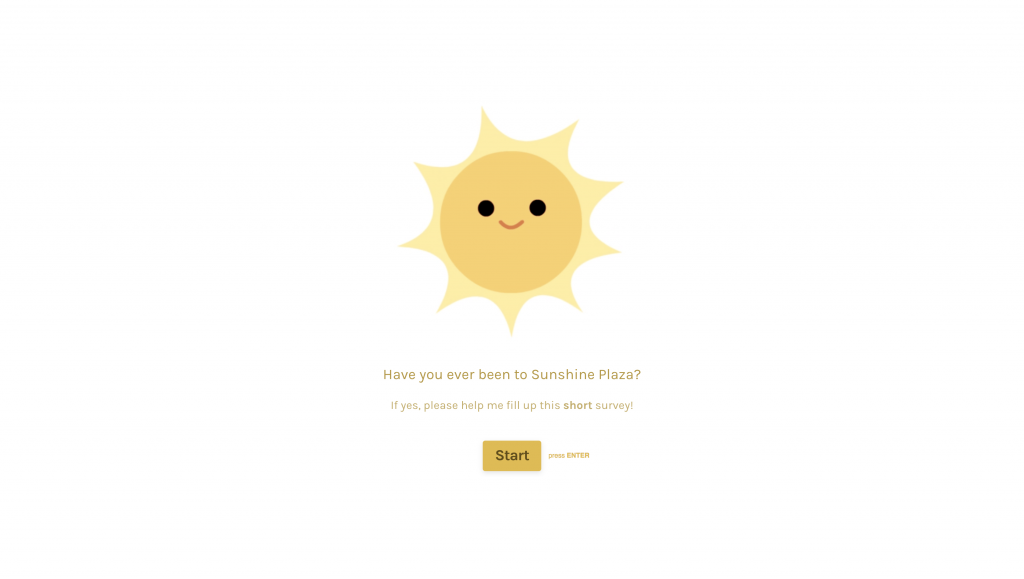 These are what I have gathered as important from a total of 98 respondents. 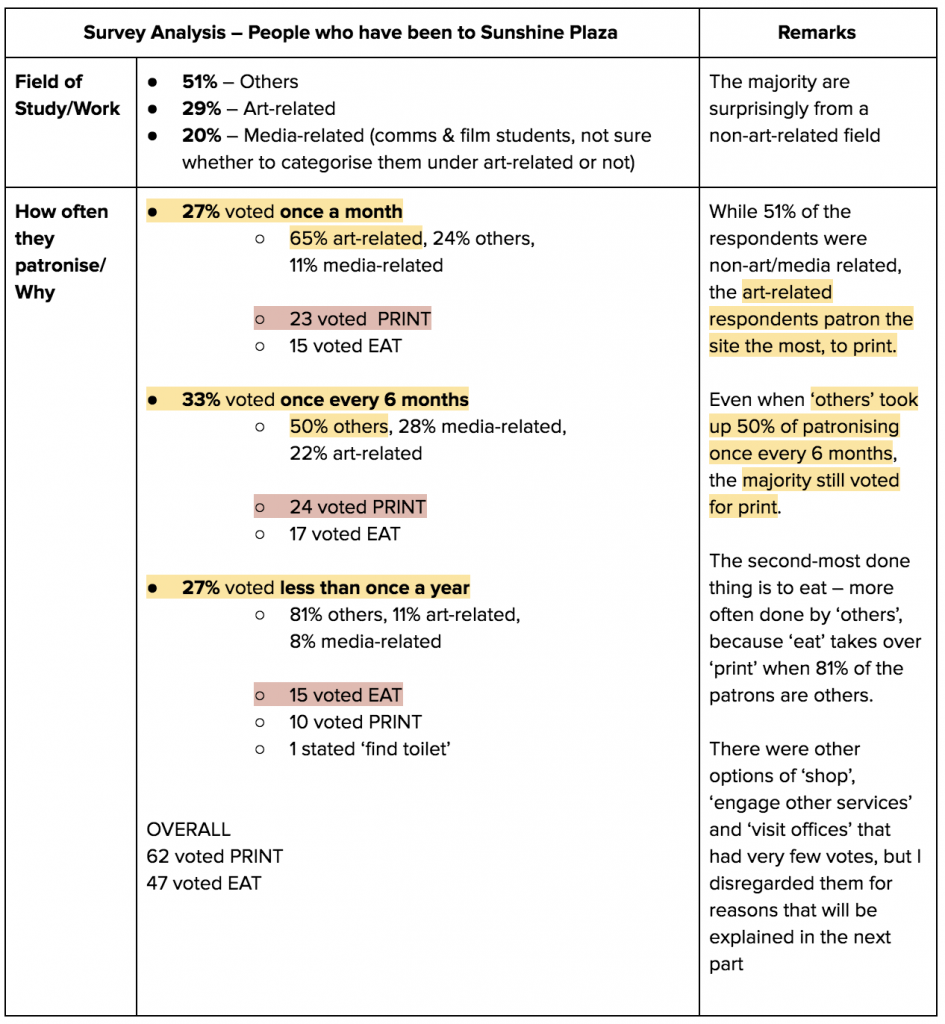 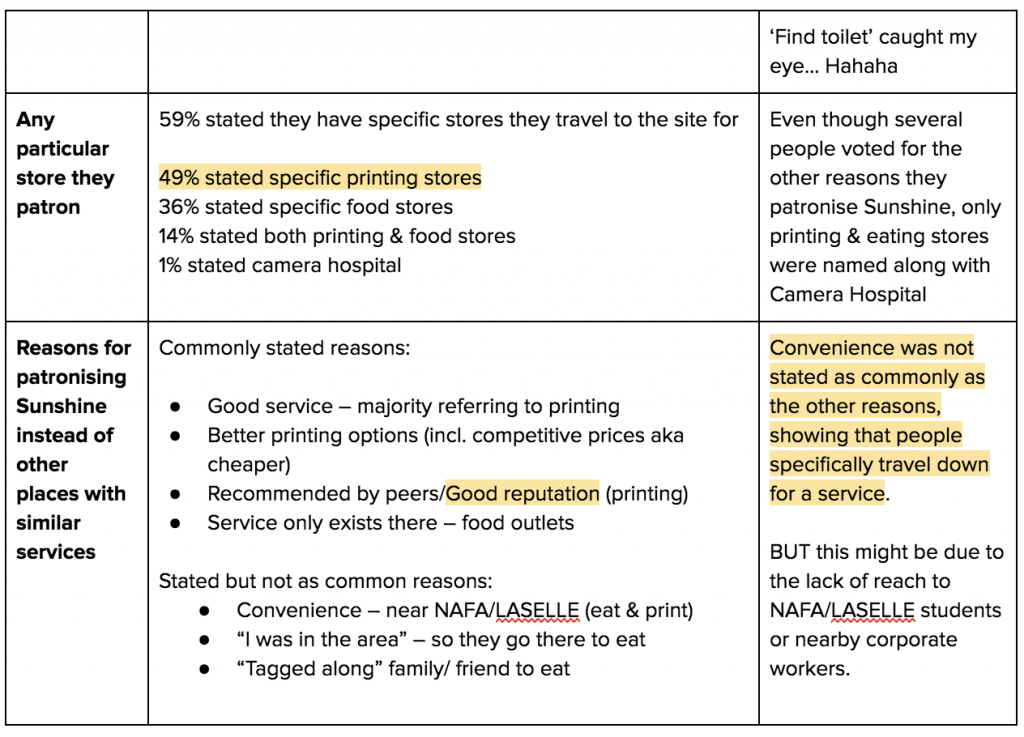 I also headed down to Sunshine Plaza to gather some information from the print shops themselves as their perspectives may show different results. I also conducted a short interview with my mom, as mentioned earlier happened to work with the real estate agency that was in charge of Sunshine Plaza when it was first built. 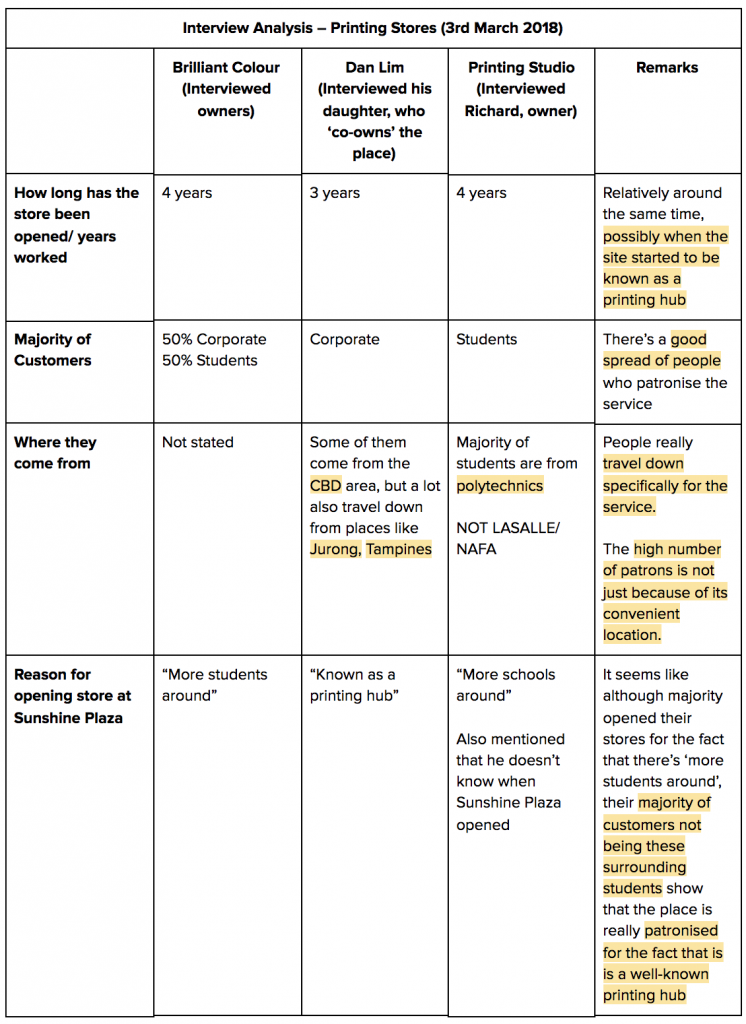 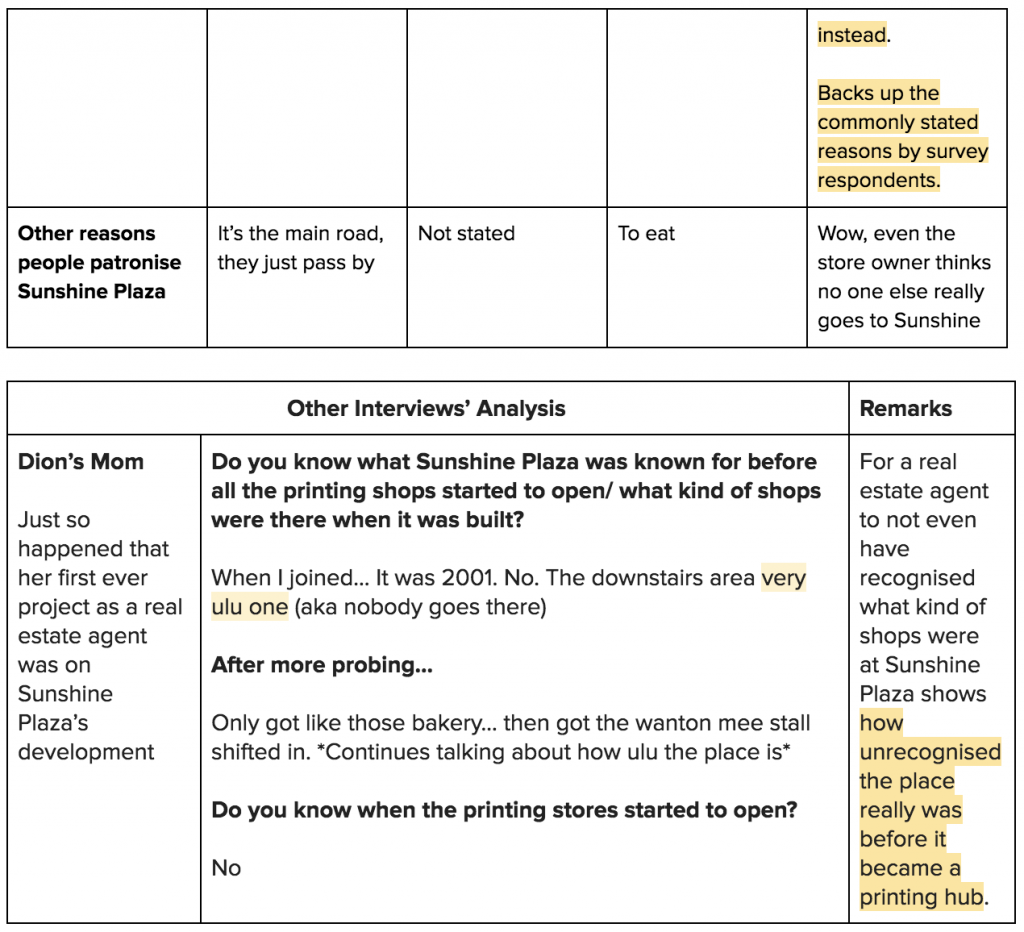 As I only settled on the decision that the aspect that makes the site unique is the fact that it is known as the nation’s printing hub, I went back a second time to gather more information.

Unfortunately, I had gone down to the site a little bit too late on a Saturday afternoon and many of the printing shops were already closed. I only managed to get one interview from Dan Lim (the actual Dan Lim this time), although he did provide me with useful information, as well as make my own observations. 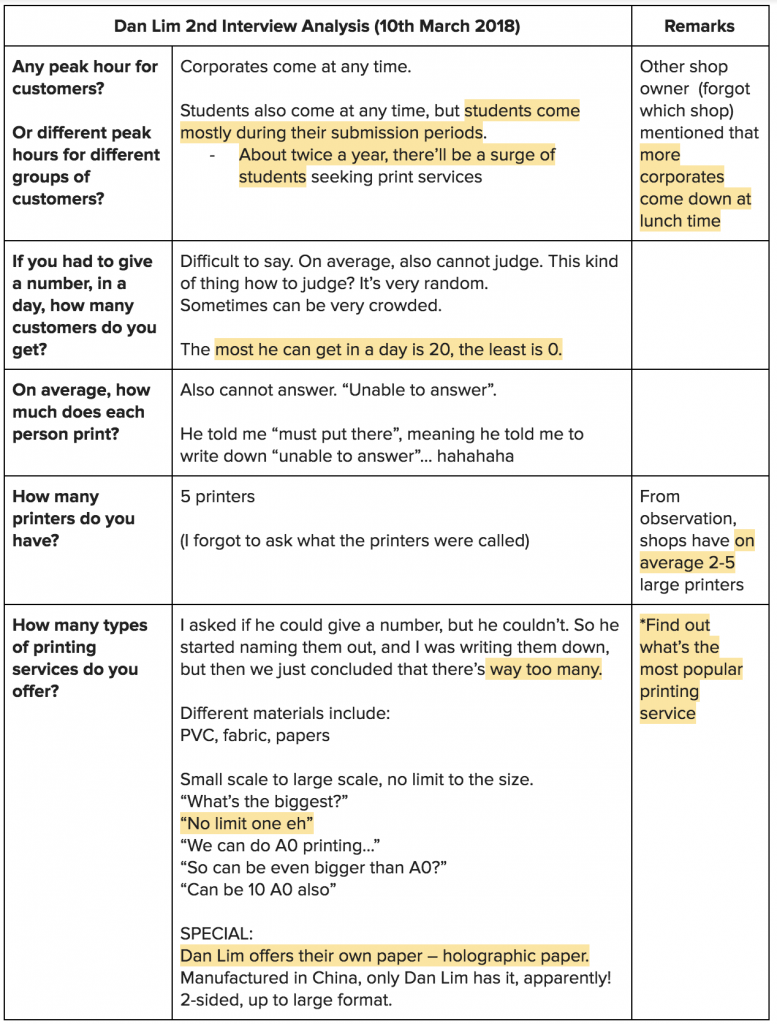 I was intrigued by the unique idea of lost thumbdrives at a print nation and decided to go further into detail about it.

I told the staff that I think I had left my thumbdrive behind so that they would reveal their hidden stash. 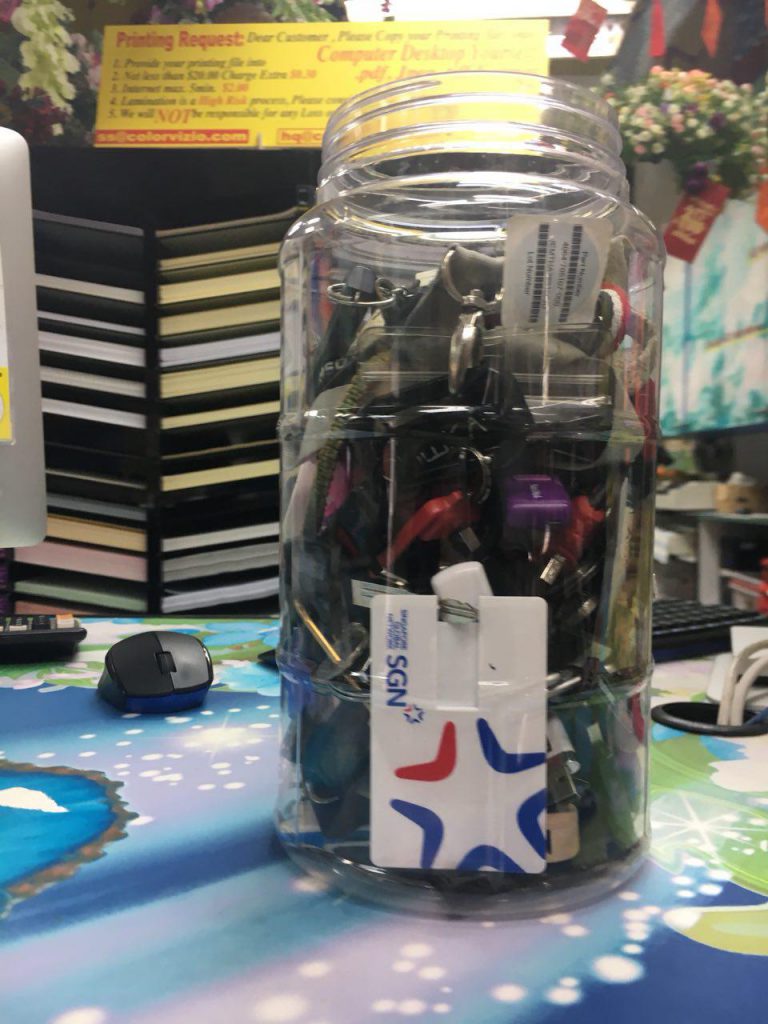 I asked Dan Lim if I could see his collection of thumbdrives after talking to him about how people always leave their thumbdrives behind, but he showed me a size comparison instead. 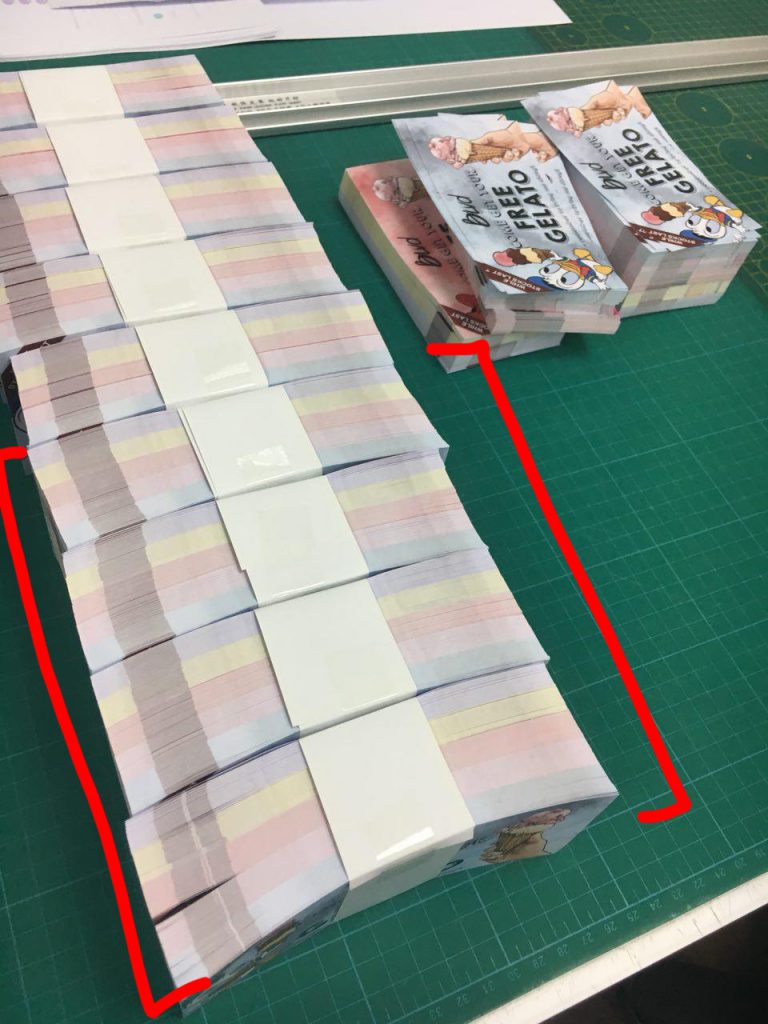 I sent out another online survey that had only 1 question:
If you have printed at Sunshine Plaza before, have you ever left your thumb drive behind? Yes/No

Results: 11 out of 124 respondents said YES to forgetting their thumbdrives

The number seems rather ‘big’, but the possibilities of having more ‘no’ answers would be higher if the survey was left out for a longer time. 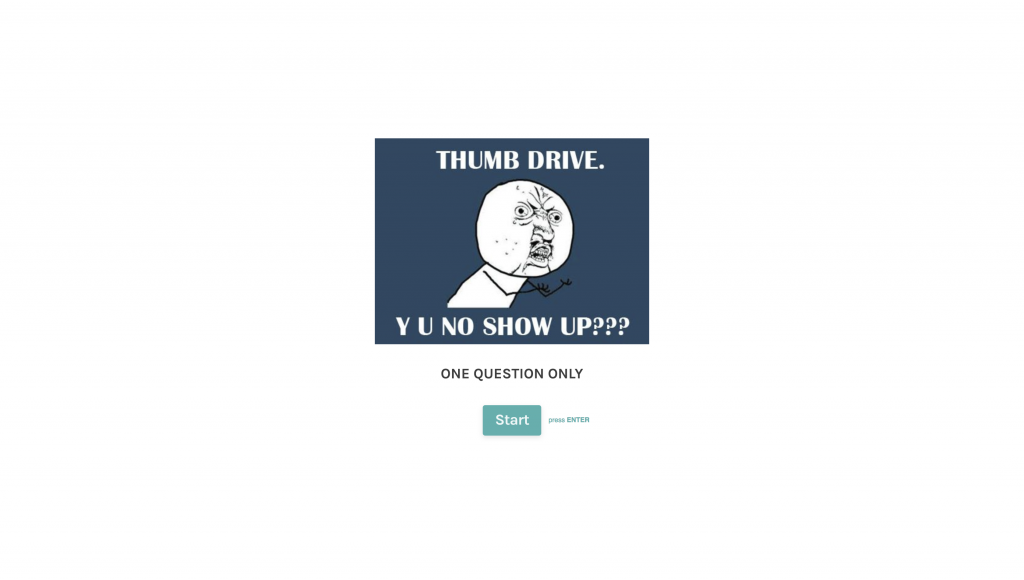 What I concluded: If the probability of patrons leaving their thumbdrives behind is so low, and every single printing shop has their own huge stashes of forgotten thumbdrives, how long must it have taken for that many thumbdrives to be collected? A very long time.

Thumbdrive Thief: While talking to my friends about this thumbdrive situation, one of them told me that they actually often take a handful of thumbdrives from Sunshine Plaza for their own use!

Seeing how useless the online and physical directories were, I decided to count the number of shops by myself. I originally counted the stores by interior and exterior, but because a lot of the shops overlap with their double entrances, I decided to just count them as a whole. 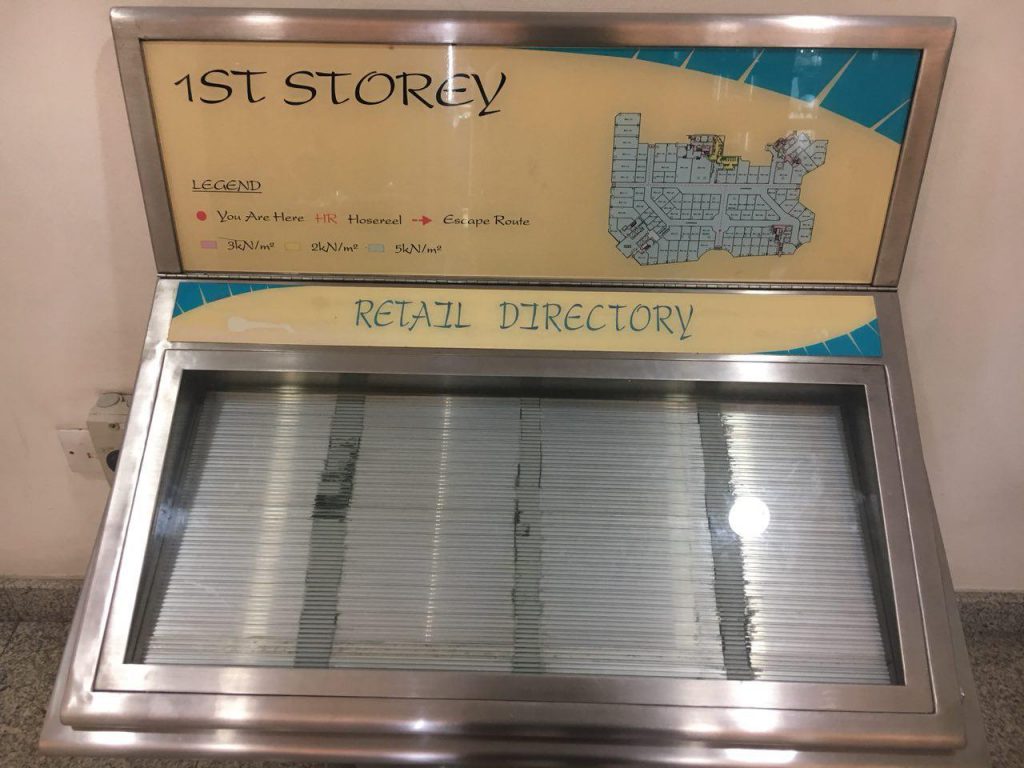 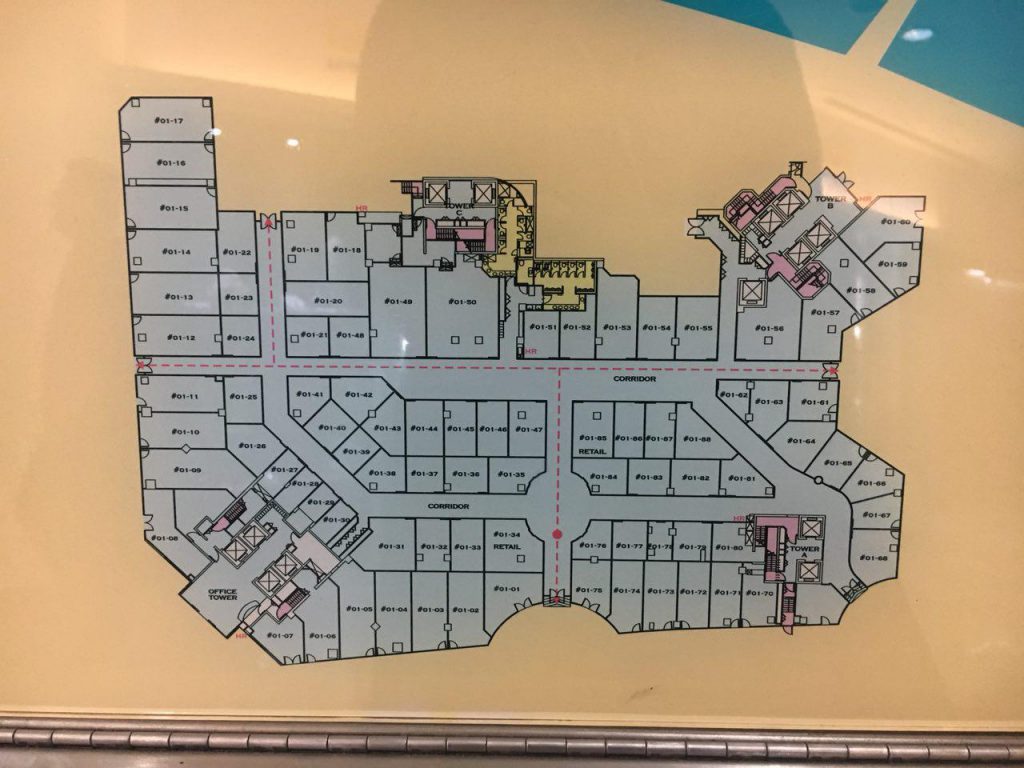 Leaving the store names aside, I concluded with: 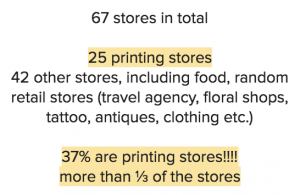 Opening Hours: Most stores open Mondays-Fridays, close early on Saturdays, and are closed on Sundays and Public Holidays (always best to call to check).

It’s all silent, until you open the doors to the printing stores

Here, I decided to put an end to my research and filter the interesting parts out to create my presentation on what makes Sunshine Plaza unique.