To create a one minute video of yourself that constructs your selfie as an “artistic alter ego:” the artist or designer you want/choose/aspire to be!

You would normally expect a person’s alter ego to be represented in a more positive setting and atmosphere, seeing as what someone aspires to be would usually be something good, and therefore positive. I, however, decided to play things a little differently.

“When the tough gets going, the going gets tough.” – Joseph P. Kennedy

There are three significant elements present in the video: myself, the rain, and the view, respectively symbolising myself, the tough, and the going.

Shot from the other side of a window, the raindrops that land in front of the camera recurrently distort the image of myself, standing in the heavy rain outside. Sometimes it seems as though I’m being pulled into two, sometimes into threes, sometimes I’m completely wiped out, and other times I’m left completely undisturbed. This comes as symbolism of the internal conflicts and struggles that occur during times of distress, where everything becomes a blur.

Despite the rain, I keep my vision focused on the view, thus symbolising who I want to be
– someone who’s able to keep her vision ahead even when things get tough. 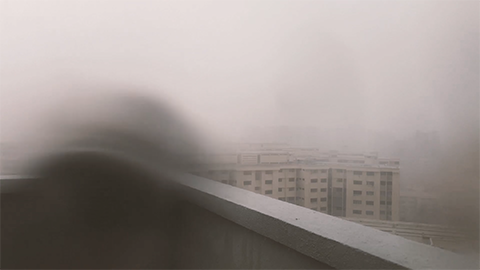 On top of this, it seems as though what I’ve created is rather the opposite of what my alter ego should be. Most people refer to me as someone who’s very ‘happy-go-lucky’, where I tend to turn many situations into humour. Could it be that I’m already living the ‘positive alter ego’, and this is my hidden (and therefore, still alter), internal ego?

Here, I ask you to watch the video again but this time, without sound.

I feel that watching the video without sound brings a whole new experience, because now it seems as though you, the audience, are watching something that’s personal and hidden inside of me – and you cannot hear what’s going on, yet you can still sense the struggle and desire to look forward purely through the visuals.

A video selfie comes in the form of curated content. Whether or not the video is edited, curation allows for any form of ‘lie’ to be represented by the individual, which is the only thing that will be able to be seen by the audience, therefore creating an alter identity as the audience is kept in the dark of what went on, or goes on behind the camera.

The content creator may choose to leave in or out whatever information he/she wants to about him or herself. This is very much like the ‘daily vloggers’ on YouTube who create videos about their ‘daily lives’. A full day lasts 24 hours, yet most videos only last about 10-20 minutes as usually, only the ‘good stuff’ are left in the video for the audience to see, thus allowing the perception that these vloggers have ‘perfect lives’.

The objects (or rather the rain and the wide view) help to serve as symbolisms within my identity, as explained above. It’s more so the symbolisms that are important, as without them, I could very well just be someone who’s standing in the rain and watching the view.

P.S. I was very cold after filming this.
The rain was also being blown in my face and hurting. my. eyes.