Having never attended an event through third space before, the online symposium hosted on Adobe Connect was a rather intriguing experience for me. It was surely interesting to see how artists around the world practiced the concepts that we have only just picked up through the semester, including DIWO, third space and glitch art. The performances provided were no doubt abstract, and while it was difficult to come to my own conclusions about how I felt about the performances, the live discussions that took place during the live performances definitely did open my mind up to different interpretations.

Overall, this essay will analyse how the use of third space to bring across messages to audiences from around the world can be seen as both facilitating and obstructing.

On the first day of the symposium was a live webcam performance put up by Annie Abrahams along with seven other performers from around the globe, titled “Entanglement”. The piece was essentially about investigating how humans can be together, while being separated, through  the online world. In order to practice DIWO, the performers had to accept the glitches that came together with the use of a third space such as time lags. Through Abraham’s blog, I have learnt that not all of these artists had even met before in real life, nor have they all performed together before.

The whole performance consisted of constant changing of random objects on screen by the performers, along with prepared phrases relating to the individuals’ own idea of politics as well as voices to create a sound environment. 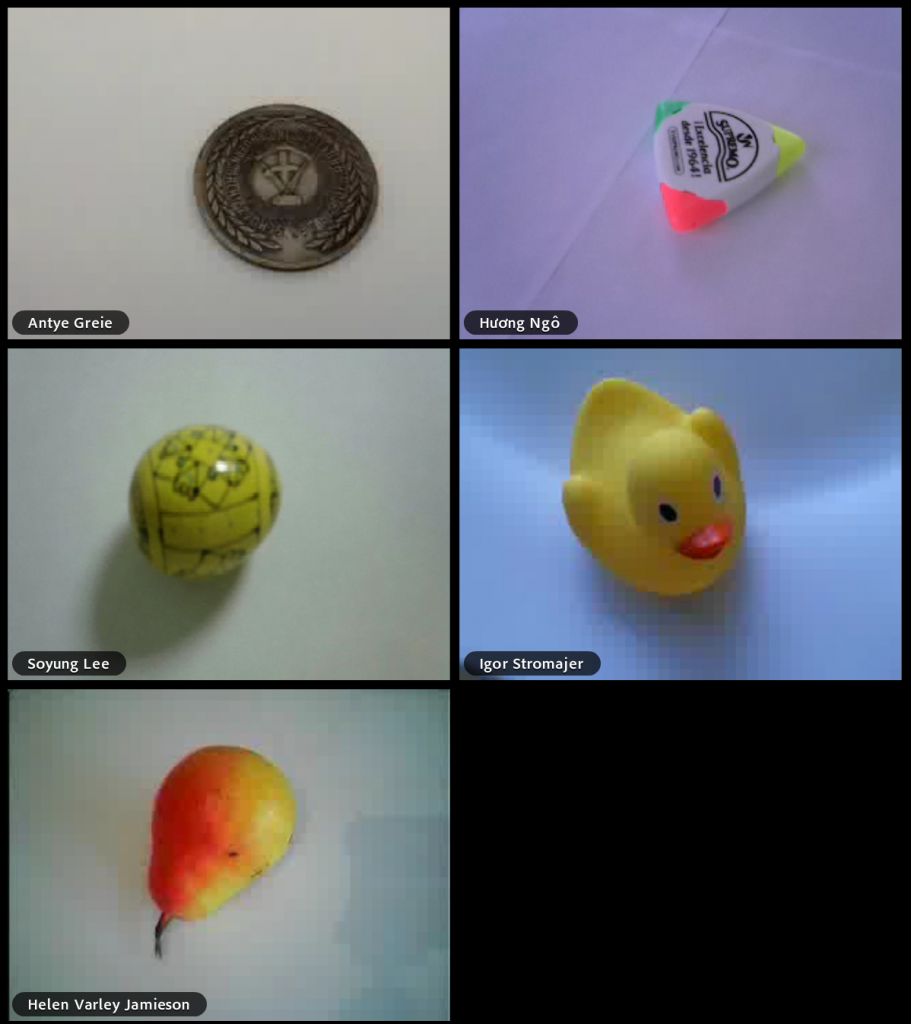 As discussed by Marc Garrett and mentioned in my first research critique, DIWO “examines the grey areas of creative control, the nuances of power exchange and what this means for independent thinking artists and collectives working within collaborative contexts, socially, culturally and ethically”. DIWO is practiced strongly here, as we can see how each individual holds equal power in the creation of the performance where their choice of object shown, phrase said and sound made is what builds the environment.

Some phrases mentioned include:
“You are our only hope now. Resistance fully supports you as our leader.”
“Tactics, comrades. Tactics.”
“Take me to your leader.”
“The machine repeats what its told.”
“Many of my favourite are not artists”

I personally found this performance intriguing as the phrases mentioned and objects simultaneously shown had no correlation at all, or at least towards anyone who was not the performer. It seems as though this was also a practice of glitch art, where glitch is defined as “an interruption that shifts an object away from its ordinary form and discourse” in Glitch Studies Manifesto. Perhaps, towards the performer, the object could have held meaning that related to his/her choice of political phrase, yet towards everyone else, it seemed more like random choices of objects and phrases being put together. It was interesting to see how political contexts were being ‘discussed’ in such a manner, where revolutionary contradictions and affirmations of ideas could have been made simply through these independent thinking artists putting together an abstract collaborative performance through their webcams. The time lag definitely did play a part in the performance, as the overriding voices made it become unclear of which phrase belonged to which performer.

From this, the performance comes as a clear example of how third space can facilitate the idea of connecting people from around the world by breaking physical boundaries – and perhaps, also allowing for wanted anonymous discussion. Yet, at the same time, this third space can also prevent genuine human connection due to the glitches that come along, causing unintended effects that may lead to other forms of results in communication, such as an unintended anonymous discussion.

The third day of the symposium managed to capture my attention for a much longer time, with the different acts that took place – specifically, the ones featuring 愛真 Janet Lin and Paula Pinho Martins Nacif (XXXTRAPRINCESS) as well as Roberto Sifuentes. 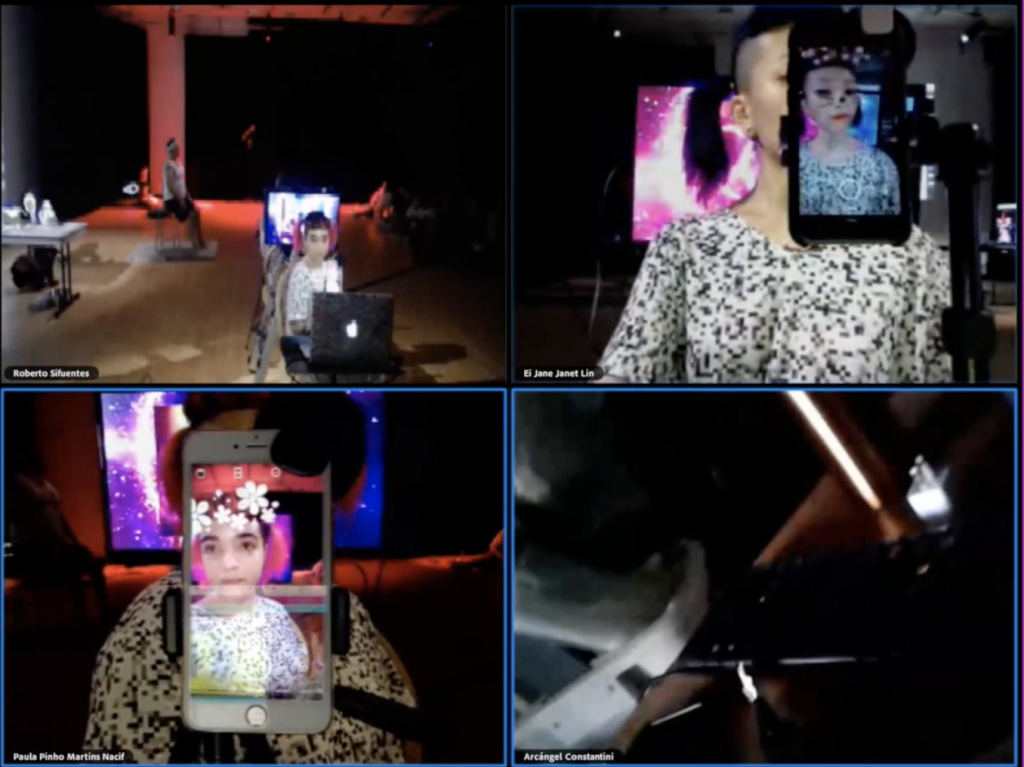 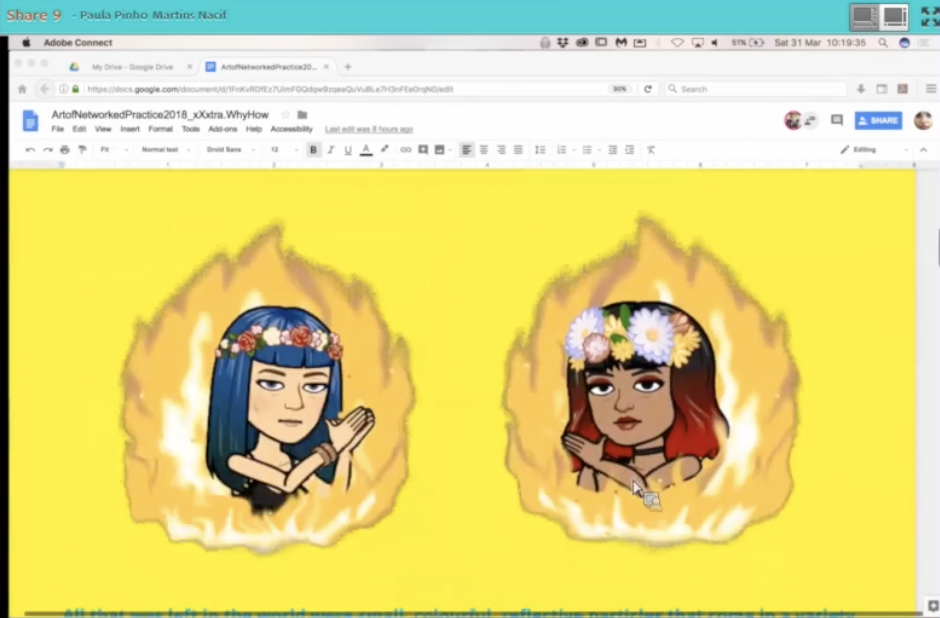 The performance by XXXTRAPRINCESS consisted of a duo, dressed up and decorated through Snapchat filters so as to take on the personification of princesses. Live, their performance took place through both the Adobe Connect stream and Snapchat videos. They also generated hashtagged social media streams, where the local Chicago attendees, as well as live viewers could use to spread the discussed topics to other social media platforms such as Twitter where there was possibility of turning information around (i.e. glitching). Topics discussed mainly revolved around societal issues, especially those relating to gender, such as feminism.

The performers had made use of the online third space environment to create online personas, so much as to constitute to an ‘alternative social world’ where these personas could only exist, and not in physical space. Perhaps, discussing such trivial topics while adhering to their created personas that seem to ‘mean no harm’ could possibly be their method of gathering people’s attention to serious topics, without triggering sensitivity. For instance, if XXXTRAPRINCESS were to be their serious, real women selves discussing feminism, would the reactions of those sensitive to the topic (e.g. those who are against feminism) be the same? These people might have instead tuned out of the stream, rather than stick around to listen to what these ‘princesses’ have to offer.

On the other hand, it can also be argued that their wild online personas could instead be a distraction towards the seriousness of the topics that they were discussing. Would viewers be able to take such characters decorated in Snapchat filters, discussing trivial societal issues, seriously?

Another idea that was also discussed in the live chat was about the use of various media platforms to discuss the topics.

In summary of the comments by Daniel Pinheiro and Alan Sondheim, is the use of multiple platforms for discussion of such trivial topics a boon or a bane?

On one hand, the Internet/social media allows for a very fast, spread of information as well as discussion that can not possibly take place in real life across people around the world. As such, it can be argued that XXXTRAPRINCESS’s use of several platforms along with the hashtags helps to have their discussions reach out to wider audiences, therefore allowing them to raise more awareness about the topics.

However, could the ‘capability’ of the Internet/social media become radicalised? Information is spread and topics are discussed so quickly that miscommunication, where information becomes wrongly translated, becomes inevitable. Furthermore, the use of cameras on both Adobe Connect and Snapchat makes it so that what viewers see is controlled and curated – what we see is not actually genuine, which could affect our perceptions on the discussed topics.

XXXTRAPRINCESS’s performance was therefore an example of how third space can act as both supporting and opposing tools at the same time.

Finally, we have the performance by Roberto Sifuentes along with his assistant that resembles what seems to be very much like a spiritual ritual, with the involvement of blood, suspenseful music and red lights. 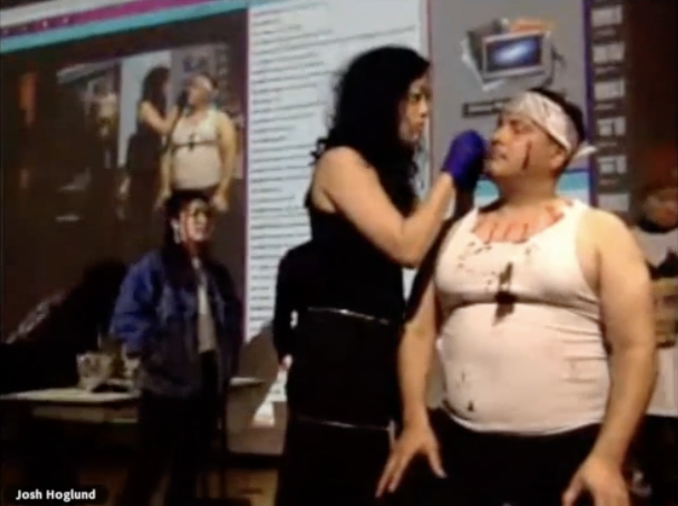 Throughout my two attended days of the symposium, I felt that the use of an online third space to broadcast this particular performance stood out to me the most. This could possibly because this performance did not have any use of words, which were highly involved in Annie Abrahams’ Entangled and the performance by XXXTRAPRINCESS, which thus led to there being a very wide variety of interpretations of the performance that could then be instantly discussed on the live chat by viewers.

For instance, many viewers including myself related the performance to something of a ritual. 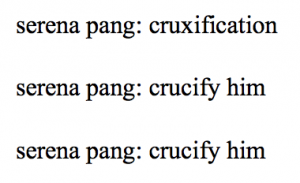 On the other hand, some other viewers seemed to have very different thoughts, such as Alan Sondheim and Devyn Mañibo who thought about ‘typical’ gender roles being played around with in the performance, where the female assistant instead becomes the one in control (of the leeches) while the male loses his power.

Then, there were those who brought up the significance of leeches: Was it the man who was suffering, or the leeches? Who was the real leech?

Taking a look at all the different interpretations, the idea that resonated with me most is about the roles played by the man and the leeches. Could it be that, rather than the man suffering from being leeched on as symbolised by his bleeding, his willingness to be leeched on comes as symbolism of how we willingly let ourselves be consumed by the Internet despite its harmful effects?

Performance context aside, this was where the allowance of live discussion through third space became most apparent to me as I was thoroughly confused throughout the performance and actually needed the instant interpretations by other viewers. Instantly after the performance was also a proper discussion by the host(s), which would not have been possible if not for third space that breaks the boundaries of physical distance. Had this performance not been streamed live with hosts, would I have had to wait for a write-up on the performance?

I believe that there will always be pros and cons to any situation, with the use of third space as a form of streaming performances, as well as having performances being available to only physical audiences not being an exception.

Only having a live-physical-audience means that no one else in other spaces can participate in performances or discussions.

While the use of third space resolves that, information may then become glitched.