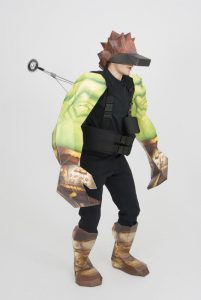 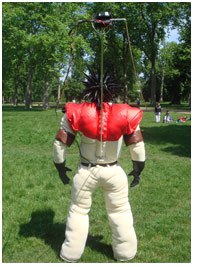 Of all the items presented in the exhibit, the one that intrigued me the most, in concept was the avatar machine exhibit by Marc Owens. Although I wasn’t able to try the rig myself. I was able to understand how it functions.

Avatar machine is basically a video camera attached to the back of the user. The user is blindfolded, with his only way of navigating through the streets is by camera footage. The idea of this exhibition was to give this individual a third person point of view in real life and see how he/she would navigate.

As someone who has played lots of video games, including third person combat games such as grand theft auto, Arkham Asylum and The Witcher 2, I find it fascinating that such an exhibition exists where you get to play these fantasies out for real. I can only imagine such an experience to be disorienting as you no longer feel like you’re in total control. In fact, one might even develop an out of body experience

Though simple in concept, there are a few tricks when navigating via the avatar machine. First of all, the footage may be slightly delayed due to latency, making the user unsure as to whether they have accomplished a task. Secondly, they may be able to see themselves, but would be have to take note of the fact that the rig is still behind a user. I found footage of someone standing in the middle of the highway with the device. If he had turned his head a little, one of the passing vehicles would have slammed into it, tripping the user into oncoming traffic.

In the end, however, the device looks like fun, and I would think about doing something like that in the considerable future if I have the time.