“Hole-In-Space suddenly severed the distance between both cities and created an outrageous new context for a pedestrian intersection.”

Upon reading the following article, i was intrigued, not so much by the performative aspects of the exhibition, but at the fact that the “virtual space” could very well be the answer to further facilitate cultural preservation. We’re living in an ever fatalistic world which claims that diversity is our strength, yet cultural homogeneity and has been proven to promote economic performance and social cohesion.

The Mcgill university from canada actually ran a simulation which favours Ethnocentrism over humanitarianism, with categorization-elaboration models showing a limit to group performance as diversity is increased to higher levels.

Another policy analyst by the name of Roy Beck also confirms this, stating that the importation of 1 million immigrants on average since 1990 did little to alleviate worldwide poverty. In fact, the act of doing so actually harms the country’s ability to elevate past the third world categorization, because the future of their country had chosen to leave.

Fortunately, the creation of the world wide web, and the increasing pool of online information has been one major game changer, with cyber cafes opening a new world of information to the general public, allowing themselves to educate themselves. The most recent example, dubbed  the “virtual space” and the vidphone, is one of the latest additions which seeks to further establish a human connection without the hassles of cross-boundary interference and social stratification. However, this technology doesn’t come without its own set of challenges.

Kit Galloway and Sherrie Rabinowitz of the satellite arts project worked with NASA to develop the first ever satellite based composite-image dance performance, exploring the financial and logistical advantages of satellite broadcasts over terrestrial microwave or landline based transmissions. More specifically, they explored the phenomenon of distance sensitivity, and how the one second delay caused by signal hops would tremendously affect bandwidth latency and consequently result in awkward interactions. This problem was eventually solved with a more robust fiber-optic network.

In another example, the Lincoln Center for the Performing Arts in New York City, and “The Broadway” department store located in the open air shopping center in Century City opened broadcasts of each other, and interestingly, relatives from across the state flocked to the screen to see their families. Some had not seen each other in a while, while others, most of whom were total strangers, interacted with each other. I believe that with the end of peak oil, cheap transportation and telecommunication satellites, this would be our primary way of seeing each other again. That is, until the fiber optic fault detection systems become too expensive to maintain.

Hopefully for the next assignment, we get to do a little more than collages in mosaic, and add some aesthetic alterations that are more meaningful. 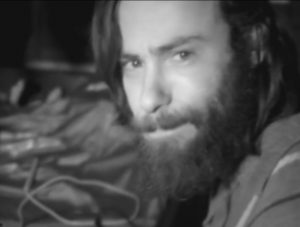