IMPORTANT NOTE: (I’m restricted by file size, so while there are certain processes i can show, there will be those that i will not be able to show like curves and poly lasso. I hope you are already acquainted with some of the concepts.) 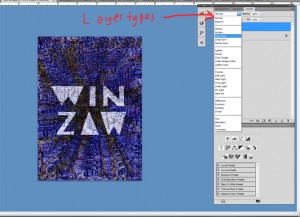 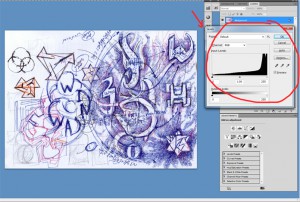 Just to clear things up, the images I’ve screen capped are to show the layer and level function. I will be making references to these process afterwards. 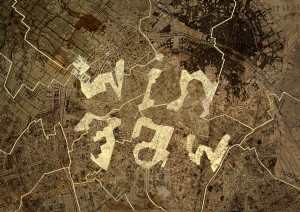 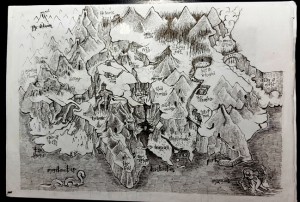 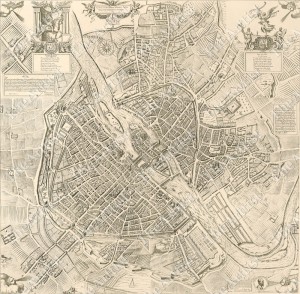 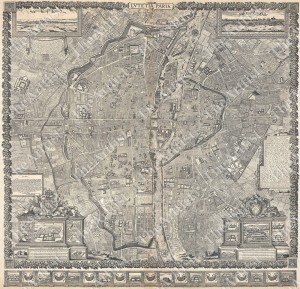 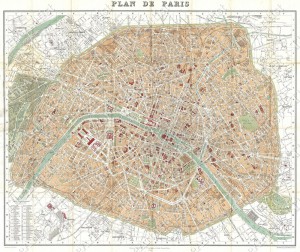 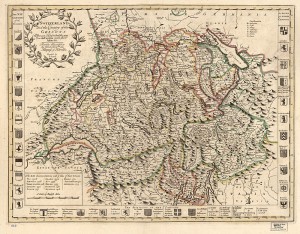 The first image is the final selected composition for “cartographer”. For this one, i spliced a couple of maps using a poly lasso tool and changed the levels in photoshop so as to match the colors. In certain extreme cases, i’ve had to desaturate the colors before adding a color masking layer on top of them. I would then use the poly lasso tool again to create the letters, this time making sure that the selection would follow the contours of the streets and buildings. After selecting my entire name, i would create a new layer and use a paint bucket tool to splash a color before setting a screen filter on top of it . I would later use a mouse and a brush tool to create the lines. To keep the lines straight, I would use the “shift” function.

The classical map design (2nd image) was one of the styles that i wanted to use. However, i was worried that I would not be able to show my name clearly enough, so i left it as it is. 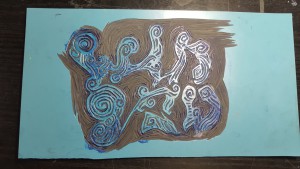 My attempt at making a lino cut. An embarrassing mistake since the letters that were pasted was inverted. A friend of mine suggested that i used a transparency paper or a piece of cellophane so that the inverted image could be reverted back to it’s lateral form. 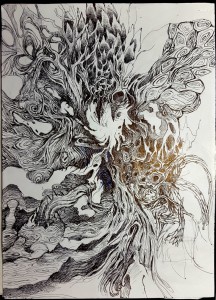 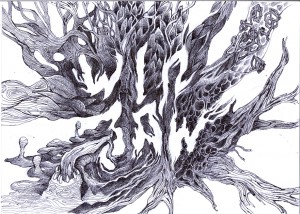 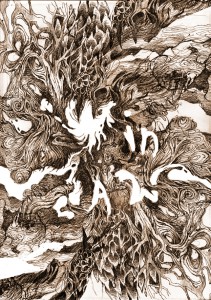 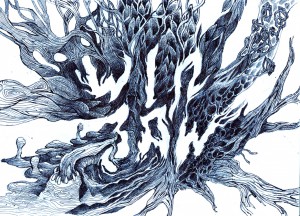 Various attempts at “biotic”. The original picture that was done in black and white was a little off centre, so i used a warp tool and positioned the words back in the middle. For the vertical version, I didn’t finish the top right hand portion and didn’t even work on the letters as i was just experimenting. However, I wanted to test if the fonts would come out right, so i used a clone stamp tool, borrowing elements from the bottom to paste in on the top. Afterwards, i used another layer and used a mouse and brush tool to paint the letters on top. I liked how the letter “Z” looked like, so i replicated it on the second attempt. One thing to note was that the second image looked larger 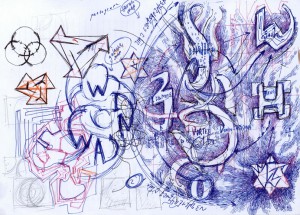 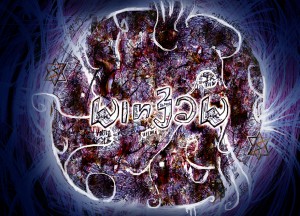 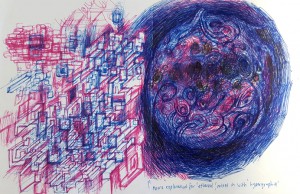 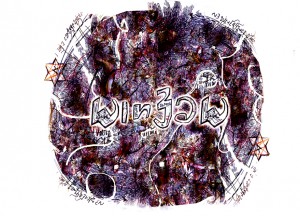 This concept came in at a close second, since I felt that the art style for this was a little too similar to “Graphomaniac”. The idea with this one was to create a planet of ethereal chaos. As for the execution, this one was a little less straightforward. Apart from the white swirls, the rest of the elements are recycled from the original image. First of all, i set the wheel to the center of the composition and duplicated the left half of the wheel before inverting it and using a soft eraser to make the merger more seamless. Afterwards, i removed the shapes from the scanned image and looked for those that resembled my name. Afterwards, i used a clone stamp tool to replicate the crosshatches. This particular part was slightly trickier as there were very little crosshatch sources that i was able to grab onto. Once that was done, i cleaned the edges to form an oblate spheroid shape. I added a few sprinkles and swirls using a brush tool. For the darkened version, i used the solaris poster as a source of inspiration. I overlaid the second scanned image ( 3rd) and placed it in the background. Afterwards, i used a soft eraser to create a glowing effect for the planet. Finally, i added another layer for the swirls that crossed over to the darkness. 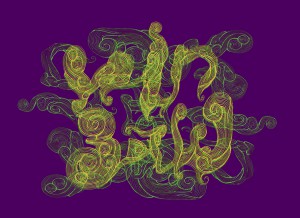 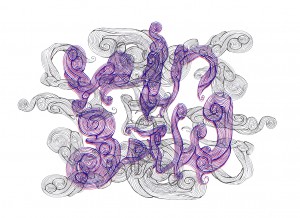 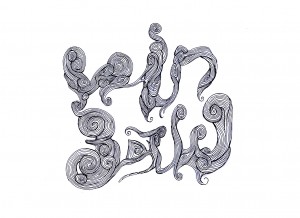 Variants for the “ethereal” concept. This one was straightforward enough. I used a swirly font and duplicated it before setting it as a multiply mask. I would later select the color range for the original scan and apply the color on the letters.(So now the letters are transparent) 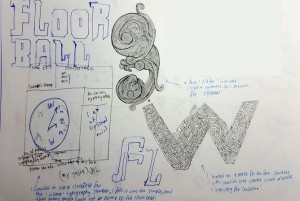 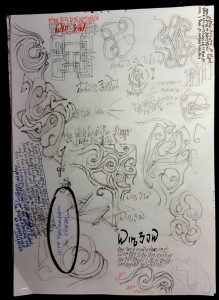 The top two were my first attempts into creating a swirly design. I initially wanted to draw a maze with my name, but was skeptical as the message could be interpreted as ” confusing” rather than intricate. I also saw a few people research into that concept, so i avoided using it as i felt that the novelty would wear out soon. 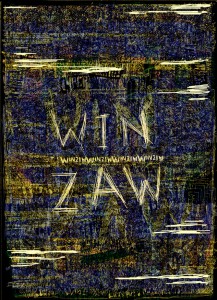 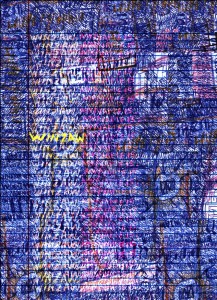 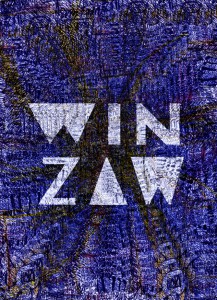 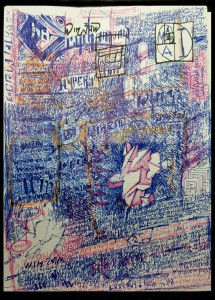 Variants for “hypergraphia” The inspiration for this came very easily as i was doodling on my sketchpad. I was also inspired by a few artists that have this condition, namely Tommy Mchugh and Robert shields. (sadly, both have passed away) People with this condition have the tremendous urge to write and draw, no matter what. It doesn’t matter what the final outcome would be as the process would be more important than the destination. In my late secondary school to polytechnic days, I would be inspired by them and condition myself to write on a book for every 5 minutes. (this would also severely affect my ability to sleep.Thankfully i don’t do this anymore) The final outcome for this concept was easy as all i had to do was write on a piece of paper repeatedly until i filled up the page. 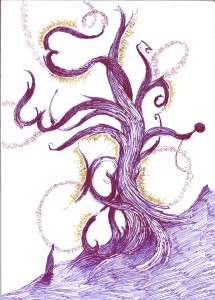 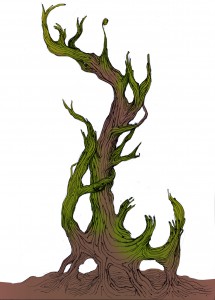 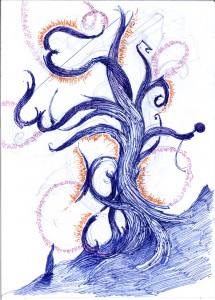 Design variants for natural. In both cases, the letters are a little hard to spot. In my second attempt, i used a multiply layer and colored it. Afterwards, I added a hue layer and changed the bark to green so as to make the letters stand out. This is one of the few compositions that required the viewer to read it vertically and be able to sift out the letters out of a form.

(TL;DR) All in all, this entire project was a technical challenge, albeit a fun one. The main challenge was to create an image physically and add to it in photoshop without using a stylus to DRAW it out. The second main challenge was to create all these images as quickly and as efficiently as possible so as to leave time for other assignments, something that wouldn’t have been possible had i used traditional medium throughout.