When I first read the project title, I had totally nothing in mind. Nothing sparked. Thus, during the first week, I created completely random marks using random items without a theme. Here is the outcome:

It was not until the last mark that I randomly created when an idea flashed before my eyes. I was experimenting marks with a pack of fake eyelashes that I brought. I suddenly got reminded of a moment in my life which felt like an emotional roller coaster. Heartbreak. That was it, I decided.

The following week, I consulted Joy to learn suggestions and ideas on how I could possibly execute my project. I wanted the project to be as personal as possible. I really wanted to enable viewers to get a feel of the true emotions I experienced during the unfortunate period of my life. Joy suggested that I should work around the human anatomy to portray a few coping mechanisms. Following that, I narrowed down to the six emotions that I wanted to showcase according to my concept: Agony, Hurt, Sadness, Longing, Relief and Bliss.

Since I wanted the project to be really personal, I decided to utilize text messages I received pre-separation as the base for my marks. I rewrote them on white paper before tearing them up into pieces and then patching them back up together in a messy manner. 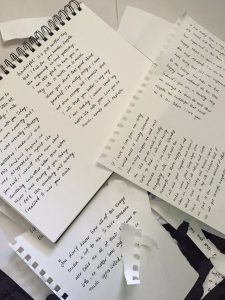 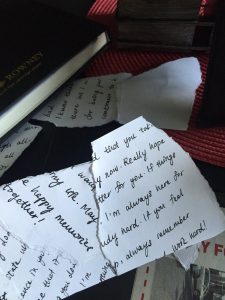 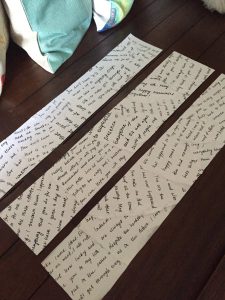 By using real messages that I received from “him”, I feel like it further authenticates the emotions that I wanted to portray. The “tear-effect” on the borders of the paper represents how I felt incomplete.

I chose agony to represent the initial feelings I had upon breaking up. Defined as extreme suffering, I resorted to using my fists to punch marks onto the paper to truly show my state of anger and dissatisfaction. It represents the instance where I was still taken aback by the situation and my inability to accept the reality of things. 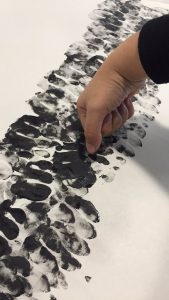 I ended up making denser and closer marks in light of showing higher amount of punches to represent the extremity of the emotion. The marks were also made from differing directions to represent how the agony was felt from many different areas. Not only did I feel the emotion mentally but also physically. My brain hurt when I tried to convince myself to accept my fate. My heart hurting on the other hand, is an understatement.

It hurt when I came to a realization that “he” was gone for good. Life began to get messy. I felt lonely. I could not sort out what I wanted to do or to have in life following the separation. To represent that while still sticking to the human anatomy theme, I decided to using my fingers. I dragged it around the paper messily to represent confusion and pain.

Similarly, the marks were made from different directions to represent how I felt the pain still from many different areas. The marks are mostly dark to represent the magnitude of the pain. As compared to the first strip, the marks in this are less dense to show how the pain was fading but at a very slow rate.

Feeling sad is inevitable when it comes to love. Sadness is often associated with crying which is also associated with being weak. I personally strongly object that opinion. Thus, in this, I wanted to portray the strength of sadness. Crying was one of my best coping mechanisms. It felt like I was crying out and getting rid of all the memories and pain.

To represent that, I used crushed tissue paper and dipped it into black ink which I then lightly patted onto the paper. The black ink represented the remnants of my tears which meant the toxic and pain in my heart was gone through the act of crying.

Different people take different lengths of time to move on. As for me, it took quite a while. I would find myself repeatedly longing for “him”, wishing the break-up did not occur. Though, that point was the stage where I was beginning to forget his promises and words for he had been gone for too long. Thus, I decided to wrap the strip with a ply of tissue paper to create a faded effect.

To portray this emotion, again, I decided to use the drag of my fingers but this time in only one direction. The line however is not exactly straight and clean. I wanted to show how I was conflicted between missing “him” and moving on. Thus, there are a few halts between the drag which made parts of the line thicker. Towards the right of the strip, the line of ink begins to fade to show how I actually progressed in moving on. As for the tissue paper itself, some areas are torn to represent how the memories from the past still peeked through and haunted me, hindering me from moving forward.

As the name of the emotion suggests, this strip represents the stage where I was relieved that I could finally sort myself out and figure out how I was to live my life from that day on and that is to get rid of everything that reminded me of “him”. Thus for the background, instead of ordinarily compiling the torn pieces of paper, I decided to burn them and lay them quite a distance from one another. The burnt effect represents me getting rid of “him” for good. The distance on the other hand, represents the success of the plan to get rid of “him” by portraying empty spaces where most of “him” used to stay. 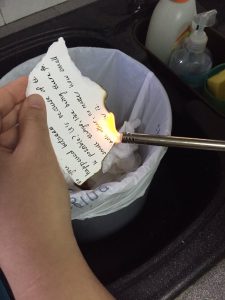 In this, I did not want to portray “relief” as a wholly positive emotion but one with a tinge of sadness as well.  I felt relieved but concurrently, quite sad to know that “he” is gone forever and forever is a long time. Thus, I decided to use tears again to represent the sadness in relief. I laid blobs of ink of the top of the strip before spraying water intensely onto it to create the “tear falling” effect. 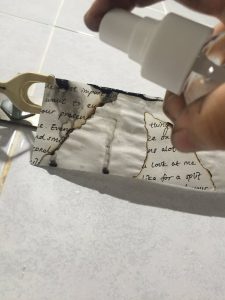 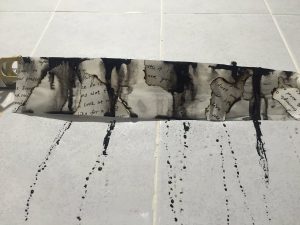 I felt bliss when I finally came to terms with the fact that he is no longer in my life. I wanted to work around the concept of “a whole new me”. After moving on, I felt like a new person who was urging to live my life and experience the world. Thus, I created the marks using what I love most: make-up and dressing up. I used the fake eyelashes to create marks that resembled the lace cuttings of a dress. 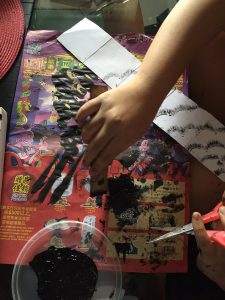 I wanted to show how I was happy again. I revived my ability to put on make-up and dress-up on my own will to look good and meet new people. This strip was all about starting anew. The background was made by patching up blank pieces of “scissor-cut” paper which represents the pureness of starting anew.

In the end, I realized that my project represented my whole journey, from start to end, of my heartbreak which was exactly what I was going for. However, there were a few challenges along the way which hindered my process. There were times I did not have the materials I needed such as crayon for my to burn to create a melt effect for the “relief” strip. I ended up substituting it with ink that I had and the spray. Besides that, I really enjoyed myself and ended up satisfied with the outcome of my project: 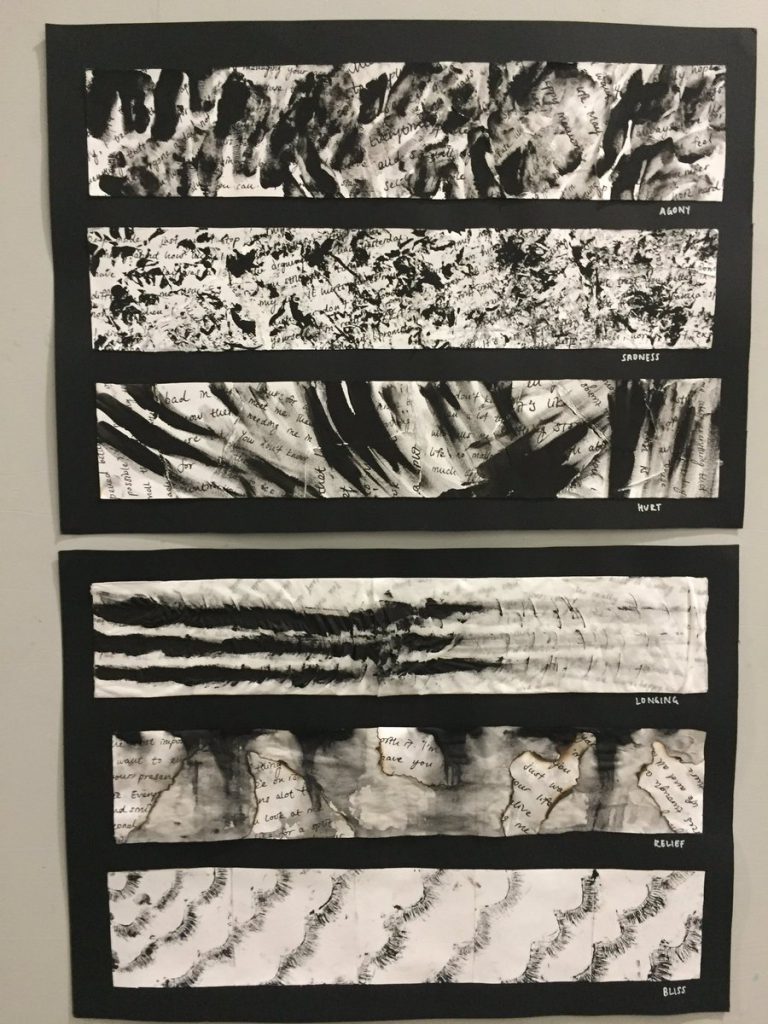