When live streaming on Facebook for the first time, I was initially hesitant to even start as I’m the kind of person that does not enjoy putting up endless vlog-styled content for the sake of exposure. I’ve never liked it when someone else does it, and I never really enjoyed partaking in it. As a result, most of my posts have been silent, focusing instead of my surroundings. 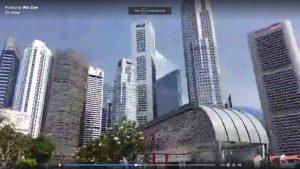 When it came to communicating with others, the result is slightly less relaxed. I’ve mentioned before that micro-expressions aren’t well captured online, be it because of the camera resolution, or due to bandwidth latency. I’ve learnt to restrain myself from talking too much as I didn’t want to accidentally interrupt the speaker from the other side and truncate or distort the conversation. In real time, any interruptions would be handled fine, but in the third space, both parties are constantly having to ask whether they can hear each other. I found myself speaking in a very rigid and plain manner to make sure the words came through. This phenomena was echoed in the hole in space art exhibition, where many of the users were simplifying their words in order to avoid any potential confusion. Others, who weren’t used to the communication medium found themselves repeatedly yelling “what?” and “can you hear me?”, only to have their peers reply “yes, yes, yes” over and over.

In another example, my teammates and I had communication issues during the cross stream broadcast assignment. Issac, who has the phone, would go around the campus asking people what their personal idols were, and I would be asked via Facebook to include images of them on a virtual collage. However, as time passed, the latency would start to compound, leading him to throw in more orders without me being able to acknowledge in time. The end result would be a one sided dialogue. 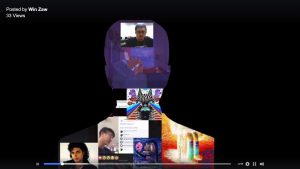 More interestingly, however, was something that had happened by accident. While recording the stream, I left my earphones on the table, unaware that the broadcast was playing music through Youtube and getting picked up by OBS. This led to an audio feedback loop which increased in chaos. This reminded me of the BOLD3RRR performance art which was done by Jon Cates back in 2012. I’m a newbie when it comes to music, but if I’m ever to compose music, I would start through procedural generation or trip-hop style sampling.