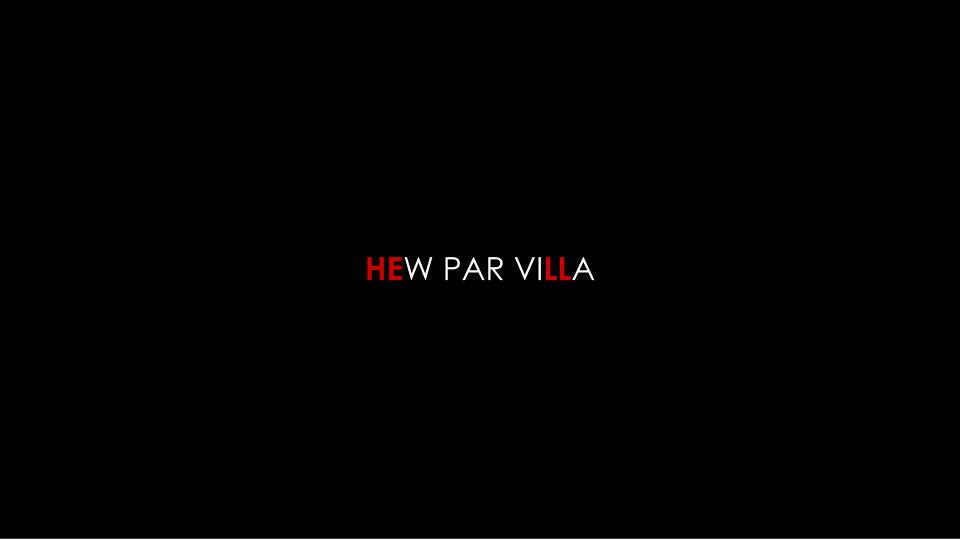 Compose a one-minute video sequence in landscape format, HD resolution (1920 x 1080) pixels of the chosen location with the soundscape. I listed down thirty places that I had never been to in Singapore. Haw Par Villa is the place that made me curious. I heard about it long time ago but had no chance to visit. Therefore, Haw Par Villa was chosen as the location for this project. Haw Par Villa is famous public park because of its range of Chinese folklore status. The status includes Monkey Mountain, Courts of Hall and etc.

I visited Haw Par Villa on a Saturday afternoon. The whole place is relatively quiet and, there was only a few foreign tourist visiting. I was attracted to the vibrant colours of the statues. The outdoor area of Haw Par Villa is bright with the blue sky, while the indoor area only has some spotlights shining on the statues. The contrast inspired me of my video. I did around 70 test shots with my phone when I first visit to try out different angles and scales.

I started recording sounds before visiting the place. It is because interviewed some people about their opinions of hell. Most of them told me that their stressful daily life is like hell. Thus, I recorded thirty sounds with zoom recorder from our daily life, such as the sound of the curtain, door lock, turning off the switch, the MRT train moving and etc.

RESEARCH ON THE VISUALS 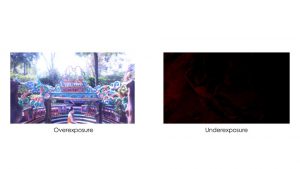 Lastly, I referred to some experimental videos on Vimeo. Some are simply using colours to create the mood, for example, the video above (https://vimeo.com/143827409). Therefore, I applied colour theory to create visual contrast just like my first encounter of the location, the peace of the outdoor area and the darkness of the indoor area. Blue associated with stability. It symbolizes peace and heaven and has the calming effect. It forms a strong contrast with red, which associate with danger and power.

RESEARCH ON THE SOUNDS

Many say that horror movie is less scary when you mute the sound. Sounds play an important part in a video, and also has perspective like images. My video contents foreground and background sounds to create space of sounds. The rhythm will be regular and irregular at different parts, while the intensity will transfer from soft to loud to achieve the acceleration of the emotion. Also, there will be sudden changes of pitch, and speed to create chaos. 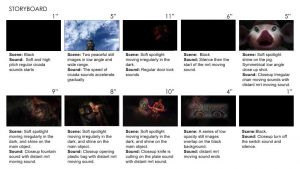 I did a low-fi storyboard and a draft video to determine the rough sound effects and the timing of each sense. The video starts with peaceful sense with soft cicada sounds like the morning. The sound gradually speeds up while the senses become dark and cruel. Several feedbacks are gathered after the first presentation, and it helped me to understand what still images, videos and sounds I need to add in and improve to achieve the idea effects. 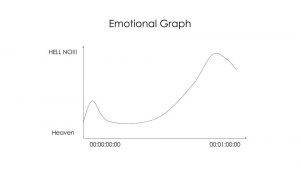 After experimenting with images and sounds, I realized that the purpose of my video is to evoke certain emotion. Therefore, I rethink about the structure of my video and came up with an emotional graphic. 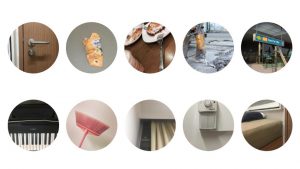 Further, I added in flash of the scary image and random sounds at the beginning based on the emotional graph. Keyboards and some other sounds are added to boost the emotion of the video. According to research, the minor chords are able to evoke negative emotions, while major chords are able to evoke positive emotions. Thus, I experimented with minor chords and came up with a short background music for the last two third part of the video. Also, I punched my bed to create drums beats, as drums help to create a solid beat and rhythm.

The video is edited in Premiere Pro. Many video and audio effects are used in this video, for example, adjusting the blend mode and transpose ratio for the last one-third of the video to achieve the distorted effects.

I named this video HEW PAR VILLA, as ‘H’, ‘E’, ‘L’ and ‘L’ form the word HELL. This video uses visual elements and sounds to evoke fear. Yet, the senses are made to be a combination of fear and pleasure. All the sound effects are created by using the daily objects, such as plastic bag, bed, door locks. It is more like a symphony instead of horror movie trailer with jump shots. The precise structure and the uses of elements, such as colours, are able to bring the audiences to walk through a museum of hell in one minute.

This project is challenging as this is the first time that I creating my own soundscape. I used to edit video using existing background music, so I could follow its rhythm. However, I had to create my own rhythm. It required time and efforts for me to explore and execute. I am glad that my professor, classmates, and friends gave me constructive feedback along the way. 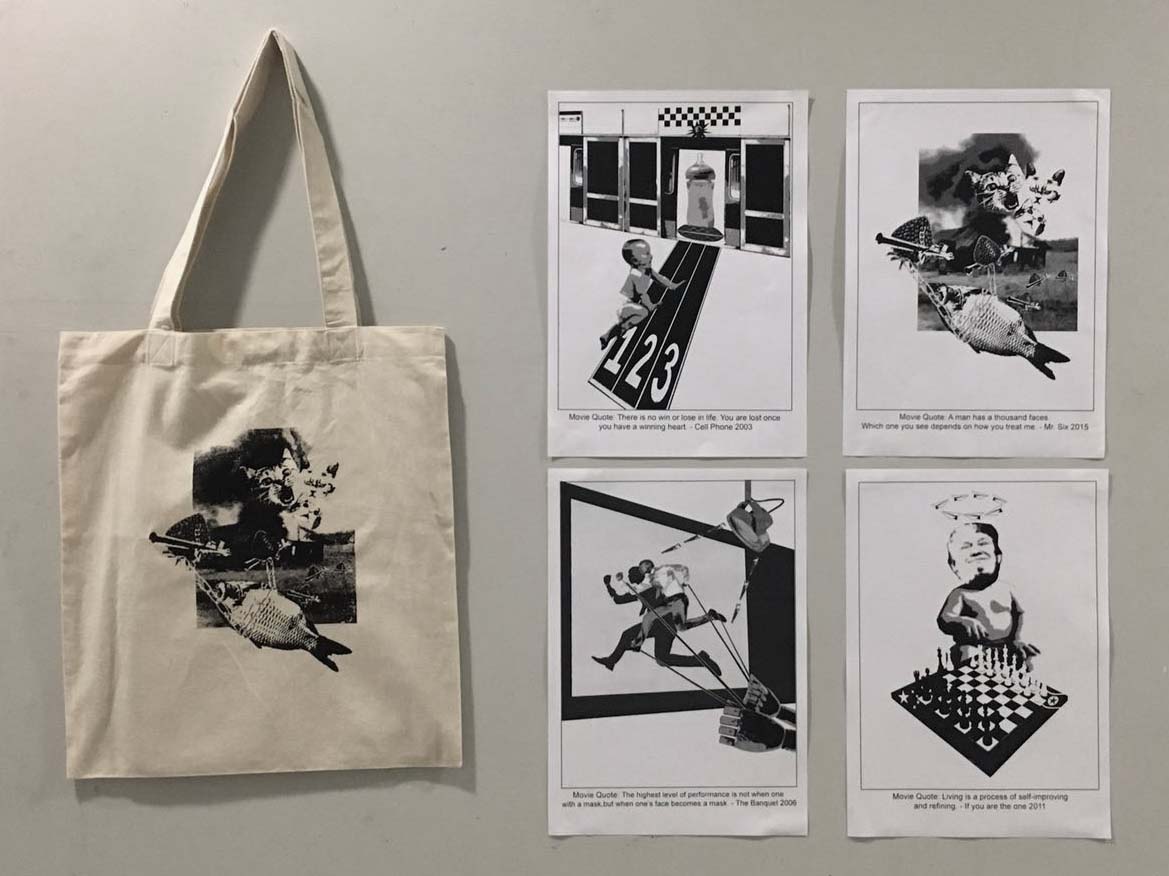 To create a visual narrative that expresses each of the four movie quotes using only symbols, pictograms, dingbats (ornaments), icons and engravings as your visual vocabulary.

For this project, I decided to work on the movie quotes from the movies that made by a Chinese director, Feng Xiaogang. I watched his movie since young, and I believe in the value that he conveyed through his movie. Feng Xiaogang (冯小刚) was born in Beijing, China in 1958. He is well-known as a Chinese comedy film director, screenwriter, and actor. Also, Feng had done other films such as drama or period drama films, and he is trying different innovative way to make films. Feng started his career as a stage designer after high school at Beijing Military Region Art Troupe. He joined Beijing Television Art Center as an art designer in 1985. Then, he started to write screenplays. Feng gained fame for creating “New Year’s Celebration Films” in Chinese cinema in the late 1990s with his own kind of humor. The chosen movie quotes from his movies are as followed:

MOVIE QUOTE: A man has a thousand faces. Which one you see depends on how you treat me. – Mr. Six 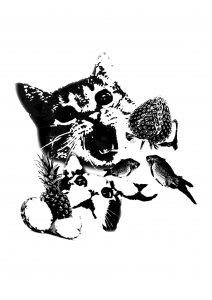 I had a long journey coming out with the concept for this movie quote. At first, I took the quote too literally, so the composition had the lake of context and it was more like a movie poster.

I came up with a few refinement with fruit army vs. cat scenery. As we know that most of the cats hate fruits. In the final composition, the strawberry army burned cat’s house and stole the giant fish. The faces of the cats show the reaction when they are treated in this way which reflects the movie quote that “which face you see depends on how you treat me.”

The giant fish here is the focal point because of its scale and position. It is on the edge of the frame which creates a sense of direction. The different sizes of the strawberries create depth in the composition. The bigger ones are in the foreground while the smaller ones are in the background.

This composition was chosen for silk screening. I tried to expose the screen using my first draft, then expose the final version. I did several experiments on newsprint and started trying on the tote bag. The outcome was not ideal and the tote bag and newsprint have different textures. I tried a few times to understand the correct amount of ink for the tote bag.

MOVIE QUOTE: Living is a process of self-improving and refining.

Based on the lessons learned from the first quote, I tried to create the context for the second composition. In this composition, baby Donald Trump is playing chess, China vs. North Korea. He is still at the beginning of the process of self-improving and refining, as many do not believe that he is able to do well at his position. Further, symmetrical balance is applied in this composition to achieve harmony.

MOVIE QUOTE: There is no win or lose in life. You are lost once you have a winning heart.

In this competitive and fast-paced society, sometimes, people want to win in any situation even for small things like getting on the MRT train. In this composition, the baby is crawling on the running track towards the huge bottle of milk on the train. The light on the train door is blinking, means the train door is closing which creates the tension for the viewers that foreseeing the baby is going to lose. It illustrates the quote that you are lost once you have a winning heart from the start.

The position of the milk bottle and the baby follow the rule of third. There are a few contour lines and implied lines pointing at the milk bottle which creates the focal point.

MOVIE QUOTE: The highest level of performance is not when one with a mask, but when one’s face becomes a mask.

The last composition was inspired by Wayang, a form of puppet theatre art from parts of southeast Asia. In my composition, there is a pair of puppet hands playing the man in formal clothes. Nowadays, the best actor and actress are probably not on the stage or on the screen, but in our daily life. Sometimes, people in the business field like to put up their show to achieve their goals. Further, the shape of the light in the composition is formed by saws. It is the weapon that the man is running away from. Also, saw is the past tense of see. It is still performance, not the truth, no matter how high the level of performance is.

Lastly, man heavier elements are placed at the left and two other lighter elements are on the right to balance the composition asymmetrically. The sticks and direction of the light are pointing at the man which lead viewer’s eyes to the focal point.

This project is really challenging for me as I was trapped with the literal meaning of the quote and struggled with coming up with the visual narrative. I had to force myself to step out the comfort zone and think out of the box. I had received a lot of comments and suggestions from the professors and classmates which helped me with my refinements. Moreover, it was the first time that i played with silk screening. It took quite some time for me to understand the principle and adopt the skill. I think I learned to push myself to the limit through this project. Lastly, there are few parts can be improved which I will pay attention to those areas in the future projects.

Tell me how you feel