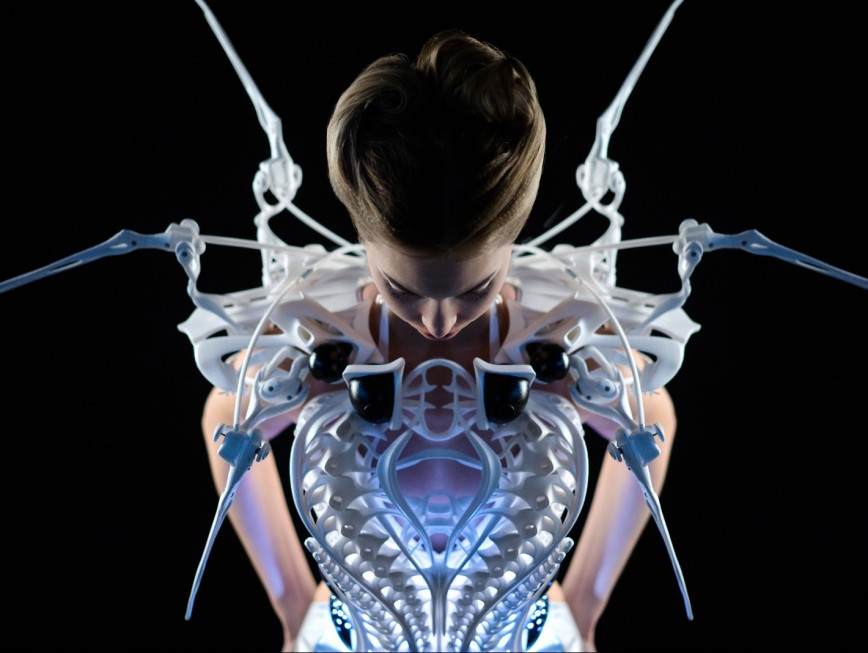 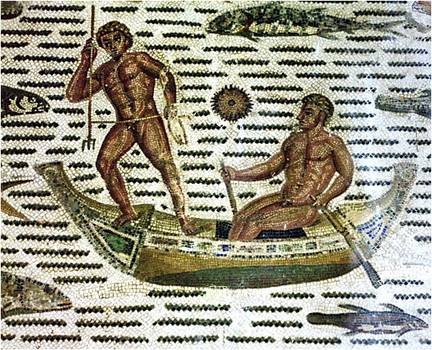 “… in the future development of these messages and communication facilities, messages between man and machines, between machines and man, and between machine and machine, are destined to play an ever-increasing part (of society).”      – Norbert Wiener

“communication and control together.” the message that the computer conveys to us is controlling our behaviors to the sensual level ever since the invention and commercialization of technological appliances, such as TVs, walkmans, VCRs, and personal computers during the 1980s. Artwork such as “Deep Contact” by Lynn Hershman expressed artist’s vision of how interactive technology is manipulating our desire and behavior.

Today, fashion is a media to explore new functions, technology and also a new area for interdisciplinary academic research including engineering, material science, fashion design, interactive design and etc. The Dutch designer Anouk Wipprecht is one of the most active designers in fashion tech. She started her fashion tech experiments working with microcontrollers such as the Arduino to see how they could be used to create behaviors. The Spider Dress is one of her garments that interact with the wearer as well as the surrounding. “Spider Dress acts as the interface between the body and the external world,” said Wipprecht. “It uses technology and the garment as a medium of interaction.”

The Spider Dress is one of Anouk Wipprecht’s 3D printed interactive garments powered by Intel’s Edison technology. It was developed from Anouk Wipprecht’s earlier version of spider dress the is less mature. The new version was digitally designed and 3D printed using a Selective Laser Sintering method using pearly white nylon and took more than 60 hours in printing.  It contains proximity sensors that measure up to 23 feet around the body and biometric signal that measure the wearer’s stress level to trigger the mechanic limbs on the shoulders that protect the wearer and attacks when others violently step into the personal space. The data measured from the wearer are stored with the power of Intel computing intelligence. The system is able to understand 12 states of behavior, and Wipprecht calls it as “an interesting interplay between co-control and education of your own body and mind.” When people approach the wearer in the aggressive pace, the system detects it as attacking the wearer’s territorial. However is one walk close to the wearer at the slower pace, the system will be in the inviting motions as if it is “dancing with you”. It seems that Anouk Wipprecht is giving a human character to the garment which shows emotions base on how people “treat it”.

Nowadays, the advancement of technology allows designers to work with microprocessors, microcontrollers that are getting smaller and smaller in size, which give designers opportunities to rethink about the relationship and interaction between human and computer. It is possible for technology to be part of us instead of in the cold device separate from us to improve our quality of life. Anouk Wipprecht is aiming to create more intelligent agents that live with us and new ways to interact with the world. She also questions that what is there to learn if the machine always agrees to whatever human does.

All in all, technology became the companion of us since the 1980s when personal computers were available to the mass. The interaction with personal computers developed from keyboard to touchscreen, voice control and even Brain-Computer Interfaces (BCI) that allow humans to mentally interact with computers. The function of computers is becoming part of our emotion and extension of the body. People had been communicating and expressing their attitude through fashion since ancient civilization. The expression becomes more dynamic with technology. The fashion tech designer Anouk Wipprecht foresee that “I see the future being more sensorial and adaptive to individual needs. Personalized instead of globalized.” I believe that wearable technology will go beyond the concept of personal dynamic that Alan Kay and Adele Goldberg Illustrated in 1977. It will straight to reach our biosignals such as brainwave and heartbeats, instead of just receiving the input from our fingertips. Wearable tech is going to be another breakthrough in human-computer interaction.