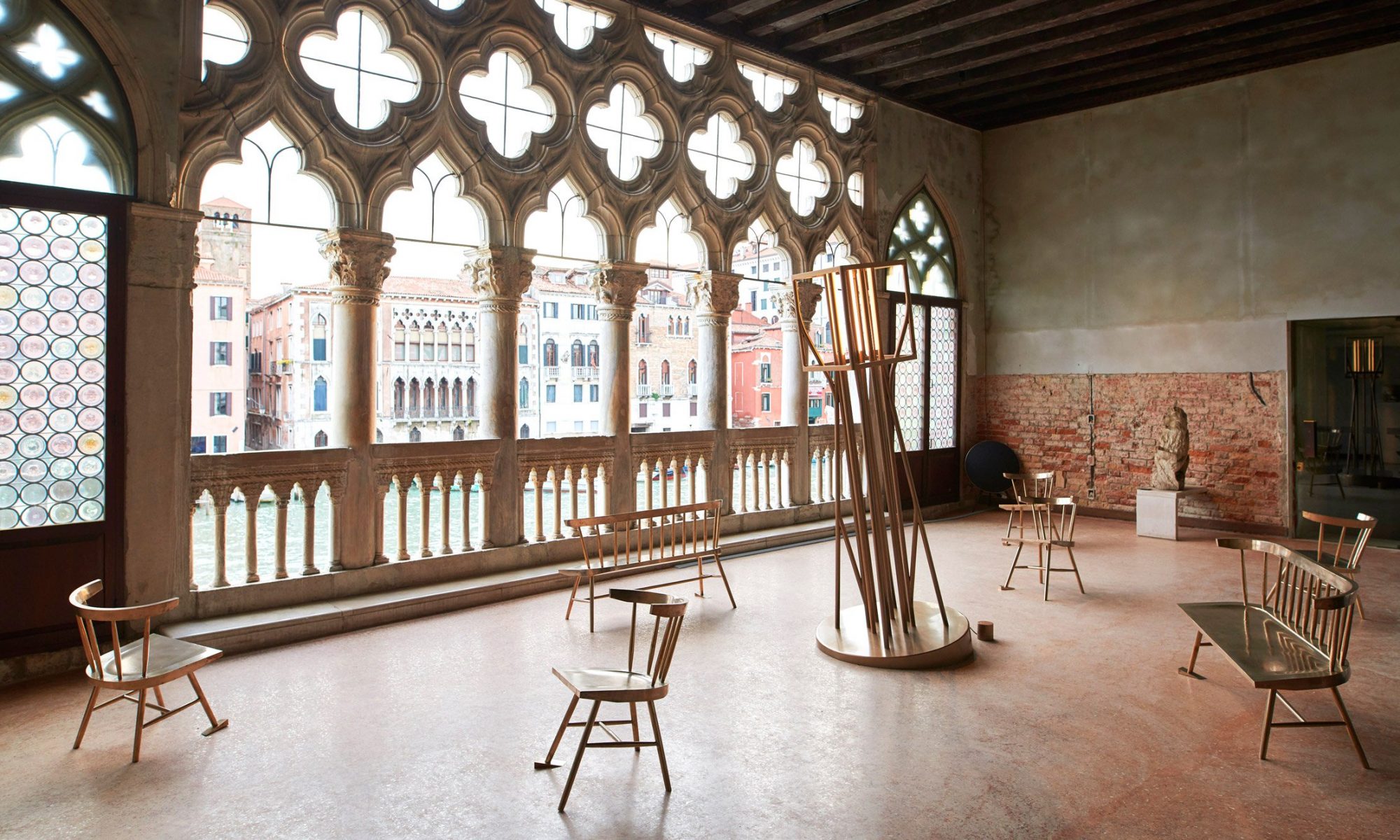 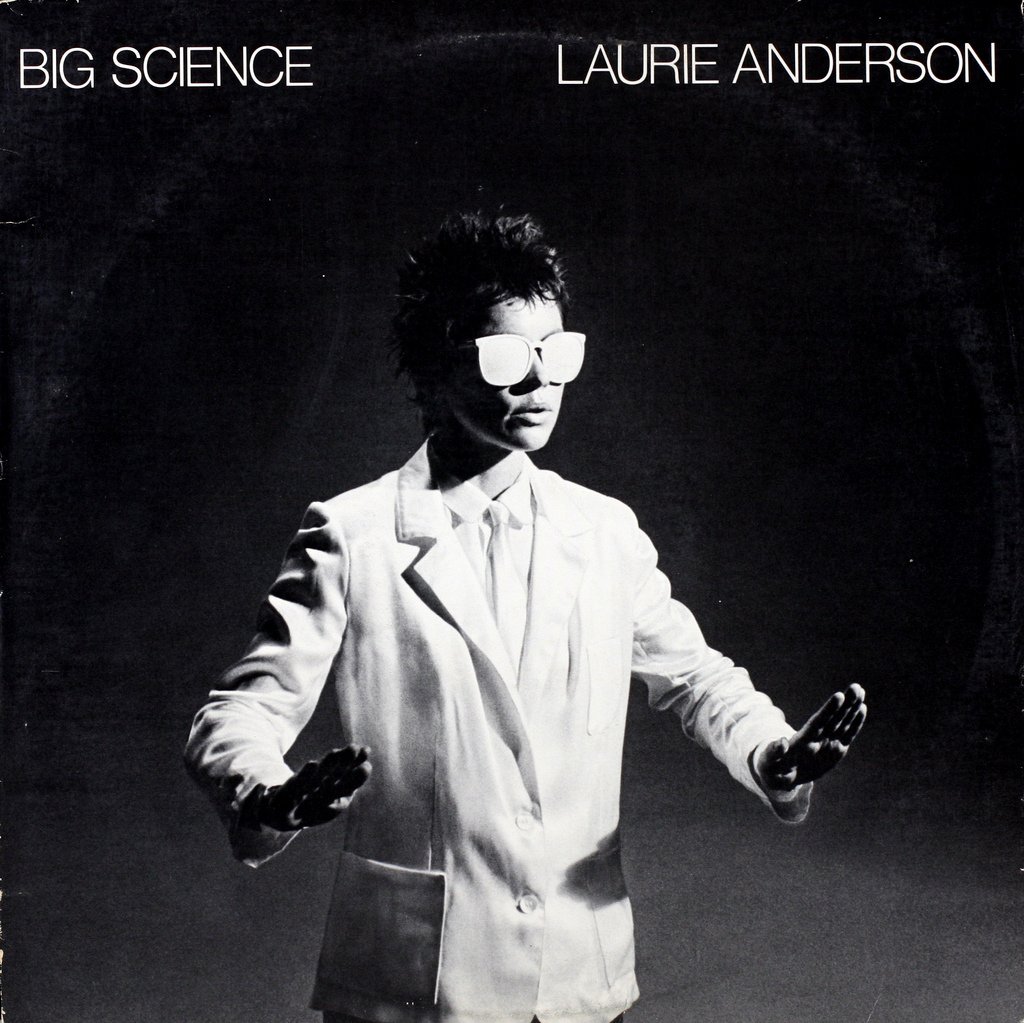 In the book ‘Digital Currents, Art in the Electronic Age’, Margot Lovejoy brings us through the history and evolution of Art in light of the rise of technology. My personal insights and opinions will be in reaction to the Sub Chapters:  (Exhibiting) sound as Art‘ and ‘Sonic Bridges‘ — the sections in which Lovejoy explains the relevance and potency sound has in this digital era and also the overarching dilemma artists grapple with, due to constant technological advancement.

After reading the section on Sound as a medium, listed below were the initial concepts that I pondered about to myself :

Sound as A New Medium?

When does Sound become ‘Interactive Art’?

Sound is Relative not Definite

When we approach the use of Sound as a ‘Visual Art’ medium, it is often isolated from any strong visible elements that might distort or ‘soften’ the experience. The space of sound exhibits are kept relatively minimalistic in terms of aesthetics — any interesting aesthetic acts as an extension for the sound interaction rather than a pre requisite to its affect. For example Lovejoy talks about the work ‘Tim Hawkinson, Uberorgan, 2000, sound sculpture installation.’ In this installation, a massive instrument, representing our internal organs occupy the span of a few rooms, attached to a central organ. The sculptures are inflatable cavities and pipes with piano keys that act like the work’s central nervous system. When the audience walks in the space, their motion triggers different keys, producing different notes.

In this example, the sculpture is transparent and the organ itself is stripped down and ‘raw’. It is not embellished and rather is placed there to simply serve a technical purpose. However at the same time, Hawkinson plays with the scale and form of the pipes to resemble that of an internal system to heighten the immersion and veracity of the experience. He does this without disrupting the hierarchy of significance ‘sound’ plays in the work. Instead it is treated as important as the tangible sculpture itself.

Hence when working with sound as a medium, we have to be sensitive in the way we employ visual complements without compromising the central medium of sound and at the same time using just the right amount of visual elements to create a holistic experience still. 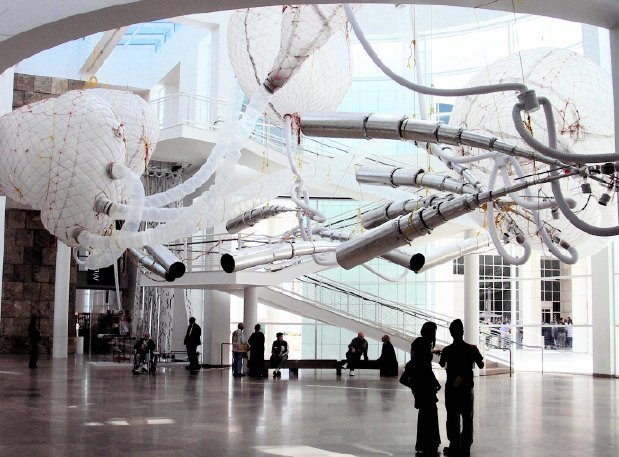 Fundamentally, by removing away or ‘suppressing’ our sense of sight, we are prevented from ‘seeing to believe’ and instead have to form our own perceptive version of reality with whatever abstract information we are being exposed to in that moment -temperature , sound etc. It gives way for wonderment and synaesthesia to occur (touch, hearing, smell) , allowing us to potentially experience a heightened multi sensory sphere.

When the relative and elusive nature of sound becomes our primary source of ‘vision’ (as dictated by the limitations imposed by the artist), we are lured to ‘unsee’ to see again. Of course not all sound exhibits involve blinding the audience. However most of these exhibits are minimalistic in nature and often have wide empty spaces with almost no intentional use of colour to cause any visual bias. On the contrary, the use of variation in spaces or the nature of the space itself acts as a vessel both physically and metaphorically for sound to travel or convey its meaning. If we were in a space resembling an empty ship and hear sounds of screaming, we might associate it to that of drowning.

Association in the digital age, with the rise of mechanisation and the internet, have become more introspective and metaphoric rather than connotative. Instead of associating a certain sensation to a definite imagery, we are likely to associate it to a multitude of simultaneous feelings or fragmented ideas derived from constant exposure to social media, the internet or even mass culture. These in turn come together in that moment to form a temporal experiential bubble that is unique to each individual. However the context of the sound and the space it is set in does set boundaries or an overarching concept for pockets of these multiverses within the same alternate reality.

The author also talks about the era of simulation with the advent of technology and computers being incorporated into art. This is inextricably linked to the way sound is used – as much as it is considered an abstract medium conceptually, in science, sound is empirical and the way it is produced or transmitted can be changed via its voltage, frequency, etc. We use hardware and manipulate elements of it to choose the type of sound emission we want to achieve. This then leaves it up to the artist to transcend it beyond science. Rather than just emitting sound, we have to exercise our creative freedom to play around with these elements or string them in non functional and unexpected ways to induce a certain reaction.

For example in Shinseungback Kimyonghun’s ‘Stone’, which we discussed in last week’s lecture, wave crashes against a stone rigged with pressure sensors, are translated into mechanical knocking of solenoids against a block of wood. The output sound occurs after going through a technical and systemic process. However the sheer loudness of it and the way it has a very flat sound is unexpected and contrasts with actual dissipating sound of waves crashing (which is projected on a screen). 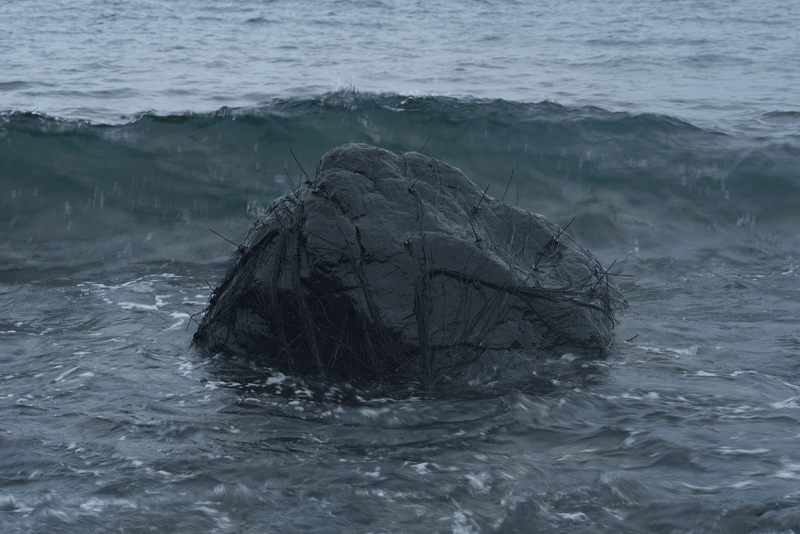 Another aspect of sonic in modern culture would be how easily accessible and ‘producible’ it is. Anyone with the right software, has the ability to ‘create’ their own sound just like how artists create songs and music. Existing sounds can also be studied, taken apart and selectively replicated. Lovejoy talks about Laurie Anderson, an experimental artist who explored the melding of sound and poetry in her works, before sound was recognised as a legitimate visual art form. Interestingly, I personally love one of the ‘songs’ she wrote in the 1980s that became an unexpected hit — O Superman. It utilises poetry mixed with constant distinct humming and electronic vocalised harmonies. It has a very mechanical, robotic and futuristic sound.

Sound, in spite of its relativity, and in its function, has a distinct power to covey a specific idea or philosophy effectively. As humans we associate sounds to objects. Anything unfamiliar or new we tend to associate with the Avant Garde or the ‘future’. When Laurie Anderson released O Superman In the 80s, when the established sound was ‘pop’, dominated by the likes of Madonna, it cause a stir and was considered highly experimental for radio. This is an example of how the accessibility and ease of transmission of sound allowed it to penetrate mass culture. Years on, as a millennial myself, ‘O Superman’ is one of my favourite songs as it still holds its own ground in being an experimental masterpiece even in today’s music scene.

Although one must not confuse between sound in the visual arts and sound that is consumed in mass culture via music, it is important to understand both the nuances and the essence of the power it upholds universally. It is important for artists to play  with, and approach sound in a poetic and liberating manner.

One further notable exploration of sound as medium would be the undeniable presence that sound has in both its presence and its absence. Marina Abramovic, in her long durational performance art training institute, MAI, has chambers that immerse prospective artists in absolute silence. It is part of her ‘workshop’ which is intended to ultimately heighten our creativity and consciousness as artists. 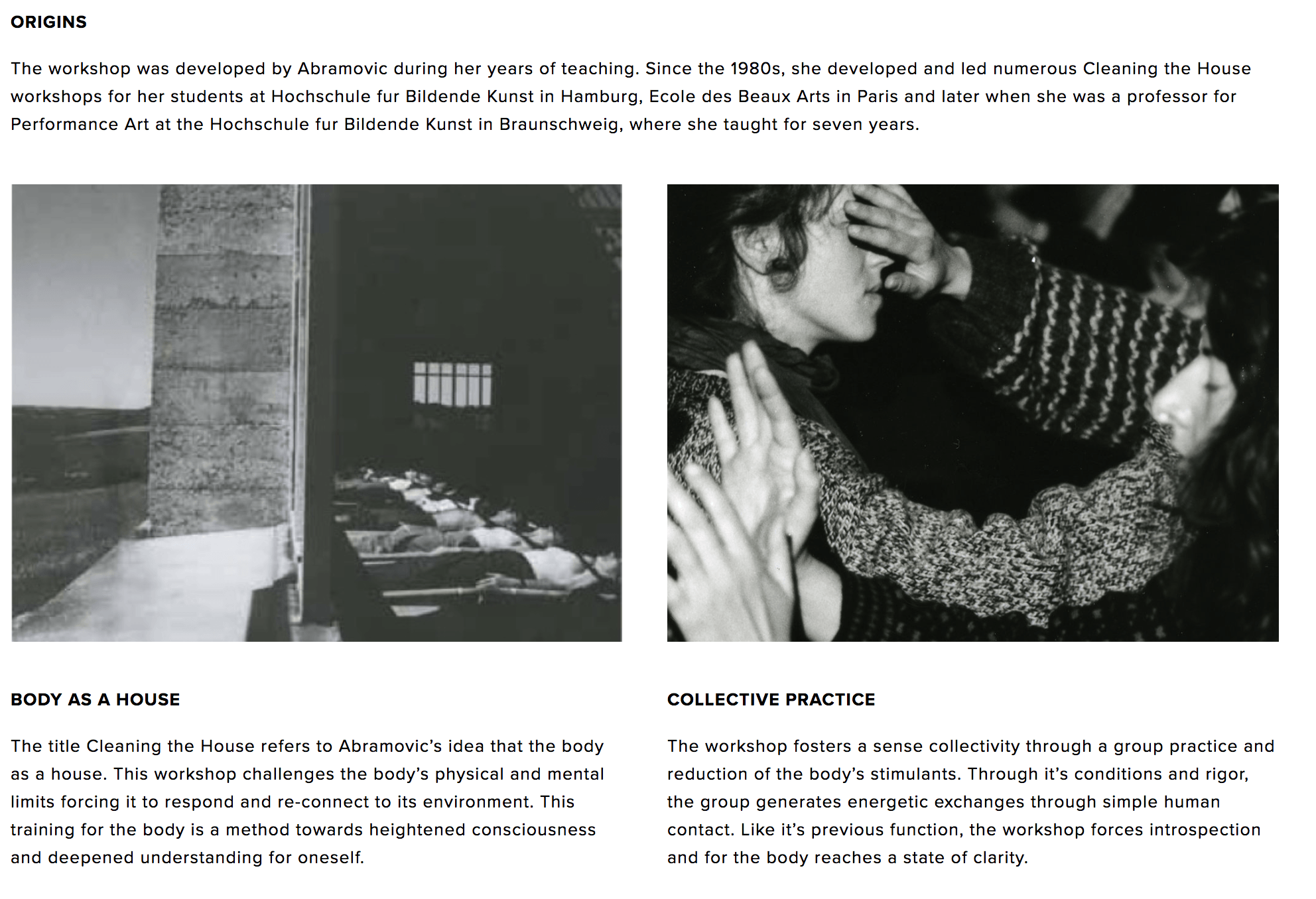 Here is an independent experiential installation of hers in which silence is the main transcending medium bridging the audience and the ‘artwork’ and also the only ‘artificial’ and deliberate mode of interaction. 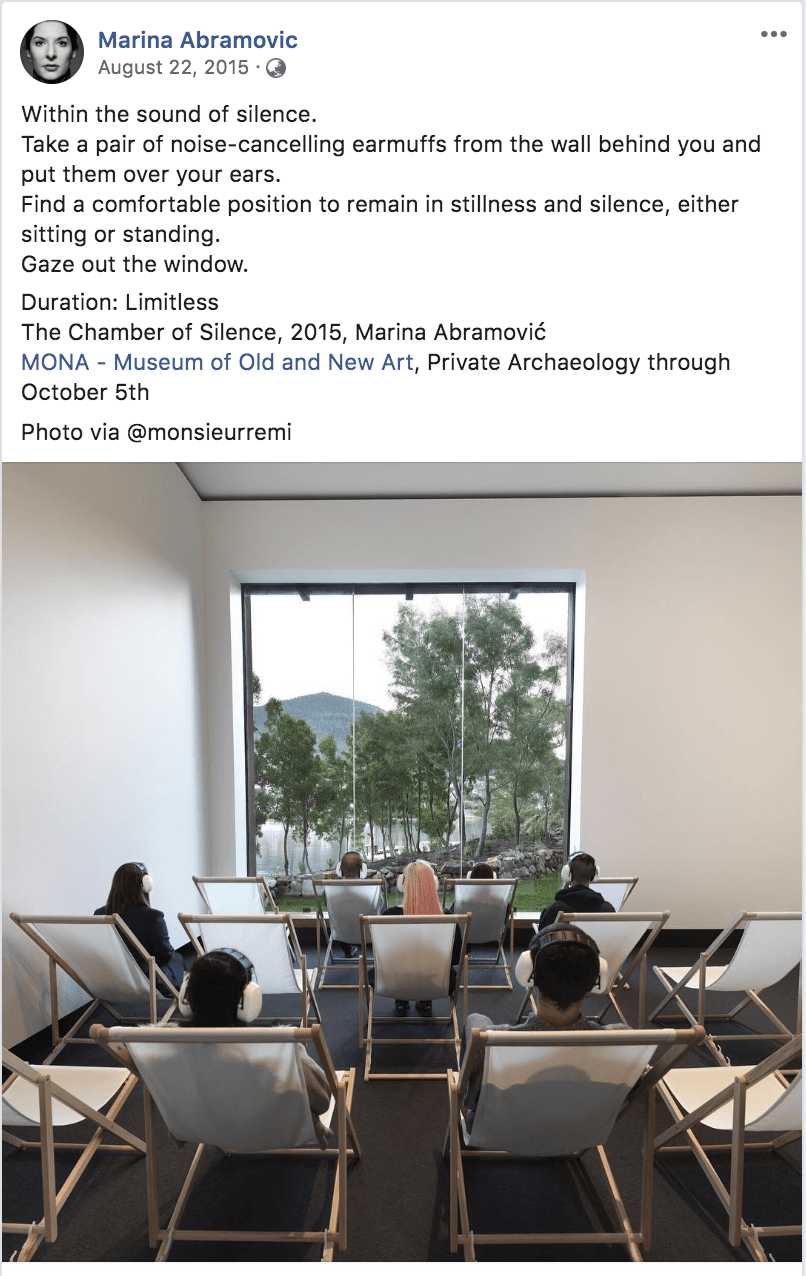 Apart from this specific idea I have chosen to discuss and explore in the above reflection, in ‘Digital Currents, Art in the Electronic Age’, Lovejoy emphasises throughout, of the dilemma we as creators grapple with, as technology advances exponentially in this digital era. We are part of a very real digital ‘Matrix’ of our own where we too are offered both the Red Pill — brutal and harsh truth of what technology can do (negatively when manipulated) and in an increasingly subliminal manner and the Blue Pill — this seductive idea of an unchartered and constantly growing territory for us to explore our ‘Art’ with each new development that comes with each technological milestone. In our reality, we are acutely aware of both these dichotomies and hence must come to a personal compromise within ourselves in order to shape and assert our creative voice with both conviction and affect.