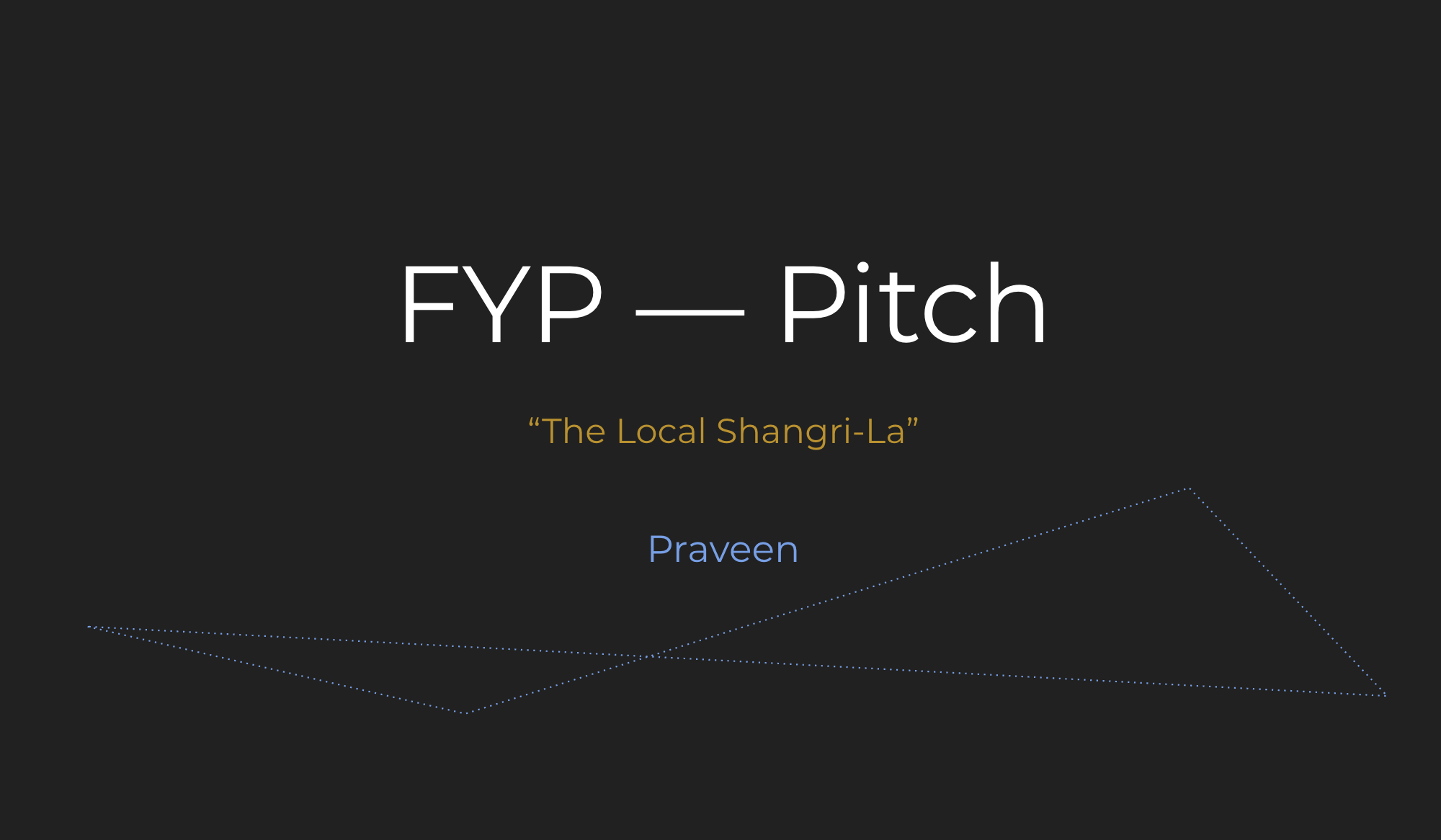 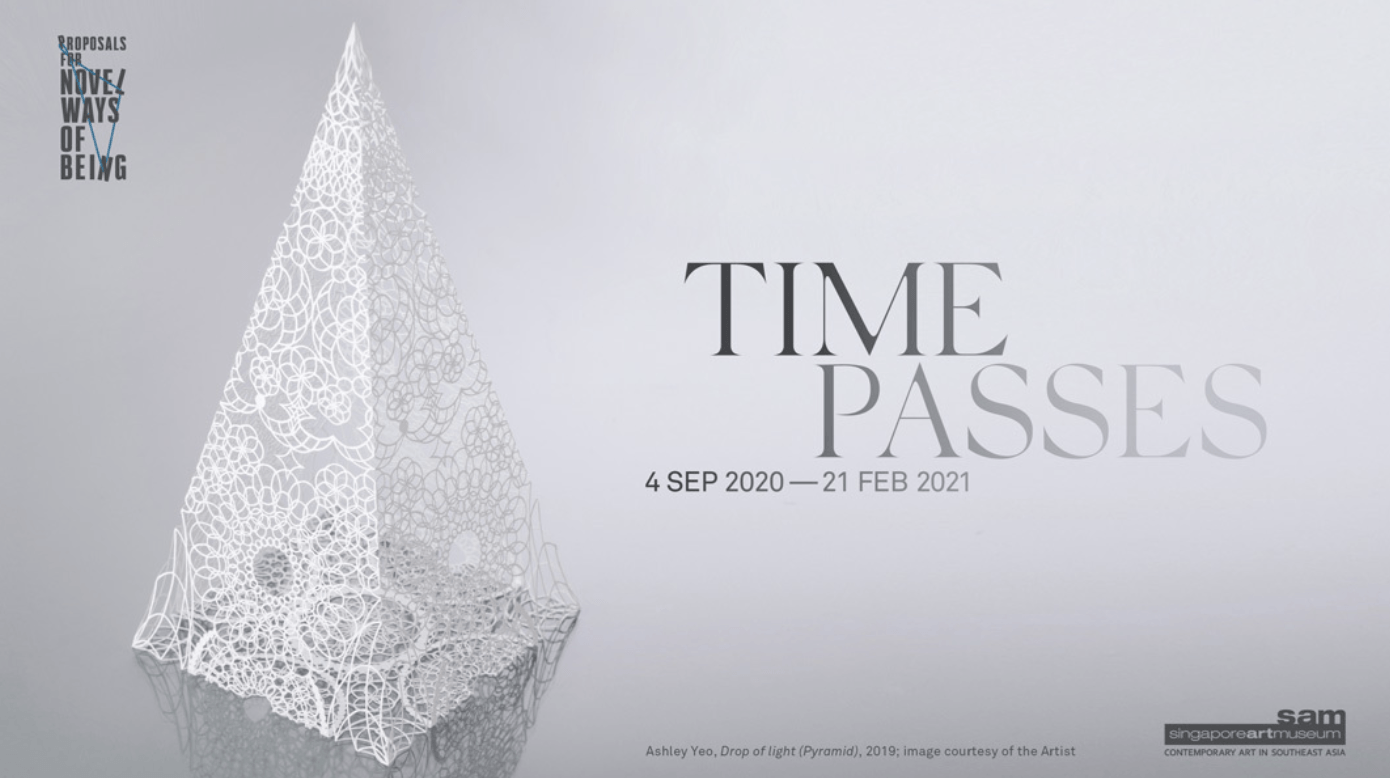 This Particular work was curated under the Exhibition Space : Time Passes. The Overarching Theme/Concept for this Space was set up as an ode to the middle chapters of Virginia Wolfe’s novel, ‘To the Lighthouse’. ‘Care’, ‘Connecting Past and Present’, ‘Closing a Loop in Time’, ‘Compromise and Attention’ and ‘Human Intervention’ are certain themes encapsulated in these chapters and the curated works aim tore interpret and appropriate these same themes, in light of the way our interaction between each other, between us and the environment (both organic and inorganic) has been altered by the Covid-19 Pandemic.

‘Passage Moist Beings’ by Yeyoon Avis Ann, is a personal documentation of the Artist’s habit of caring for snails she comes across in her path, removing them from harm’s way by displacing or shifting them into a safe space. It is an extrapolation of her personal experience an a seemingly normal phenomena, to explore the way humans interact with our environment, from her lens. 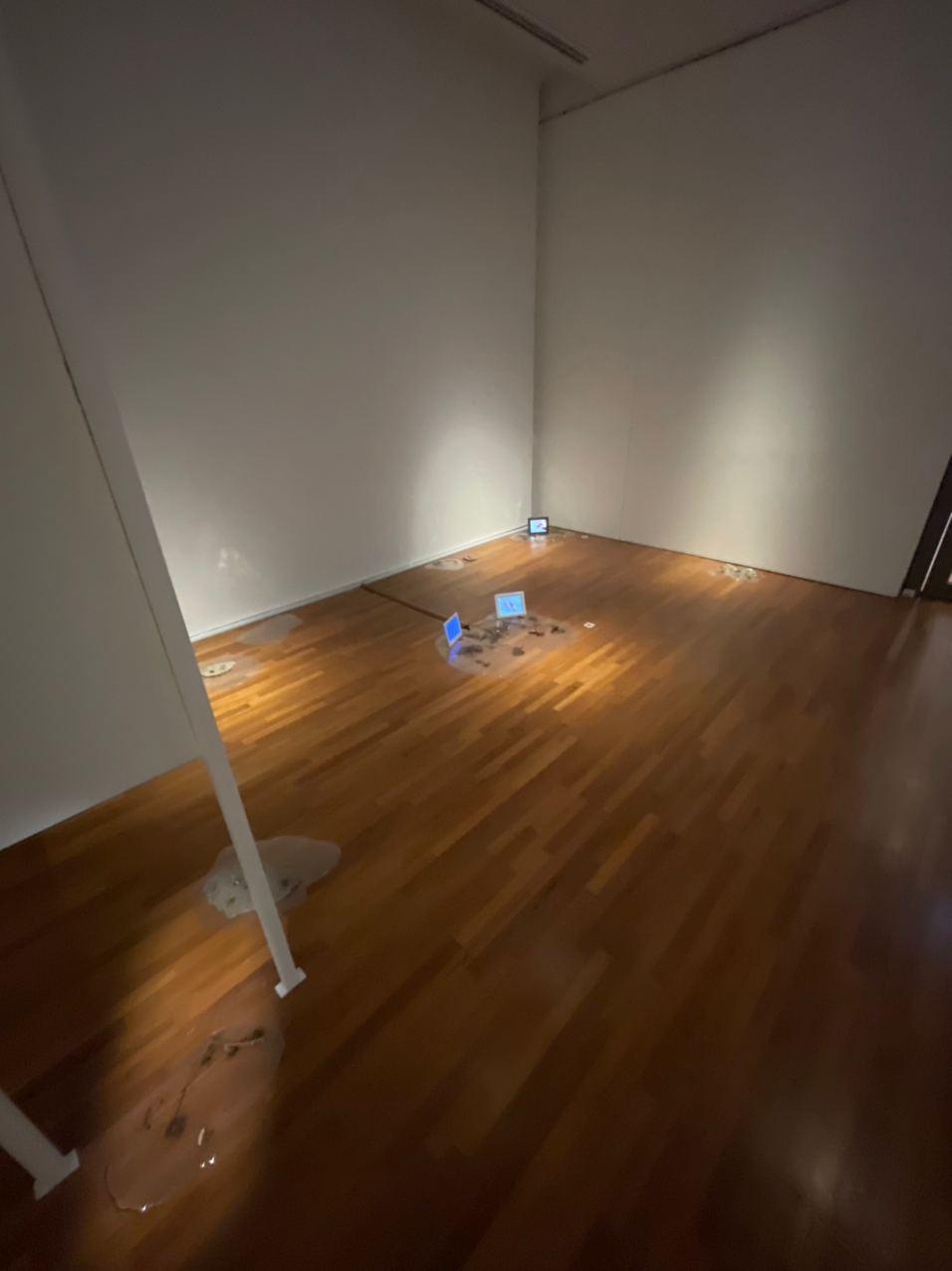 The work itself is life-sized and is realistic in the way it mimics the natural habitat or environment in which she would possibly have encountered the snails. It’s stripped down, raw and literal representation is powerful considering the space it is set in. When one walks in, they are immediately drawn to the tactfully placed ‘puddles’ of objects on the floor. We are beckoned to take a closer look, and have to kneel or crouch to clearly see the objects embedded in the ‘wax like’ ‘puddles’. This very sudden shift in our space when we kneel instead of stand as we usually would when appreciating an ‘art work’ immediately transfigures us into the artists’s perceptual and conceptual space. We are then momentarily transported away from the psychological space of the bigger exhibition though we are still very physically present within the walls of the gallery. The space between the puddles also allow for the audience to slowly manoeuvre their way through the work. There is a very real fragility attached to the work, further highlighting the idea of Snails being in harm’s way. We then are inherently forced to be careful with the way we approach the work and move through it so as not to touch or damage its elements. By forcing us to be ‘careful’ and ‘mindful’ it emphasises the idea of intervention and care.

The artist uses minimal materials to translate her message. The use of soil, gravel, twigs, leaves juxtaposed with traces of human waste — paper, cigarette buds, plastic enforces the idea of intersecting of two very different environments. It shows how human activity and our daily habits have creeped into, pervaded and degraded the natural habitat that occupy our space. Rather than being occupants and being ‘outsiders’ to nature (which we have modified and altered to clear space for our own architectural and infrastructural pursuits), we have come to a point where nature is now the ‘outsider’, forced into crevices due to our presence. The idea of snails being in our path, especially during the rainy weather and our very nonchalant disregard towards their presence, highlights this desensitised and normalised attitude we have adopted towards organisms that share the same space as us. When we do step on a snail (most of the time unintentionally) we simply shriek/wince, clean our shoes and continue walking. It is important to ponder or consider if our act of wincing stems from our ‘pain’ from hurting the snail or rather the ‘disgust’ from having slime all over our shoes. Hence Yeyoon’s work beckons us to internalize and revisit this phenomena. Personally, I too have the habit of picking snails in my path and moving them into bushy or protected areas. 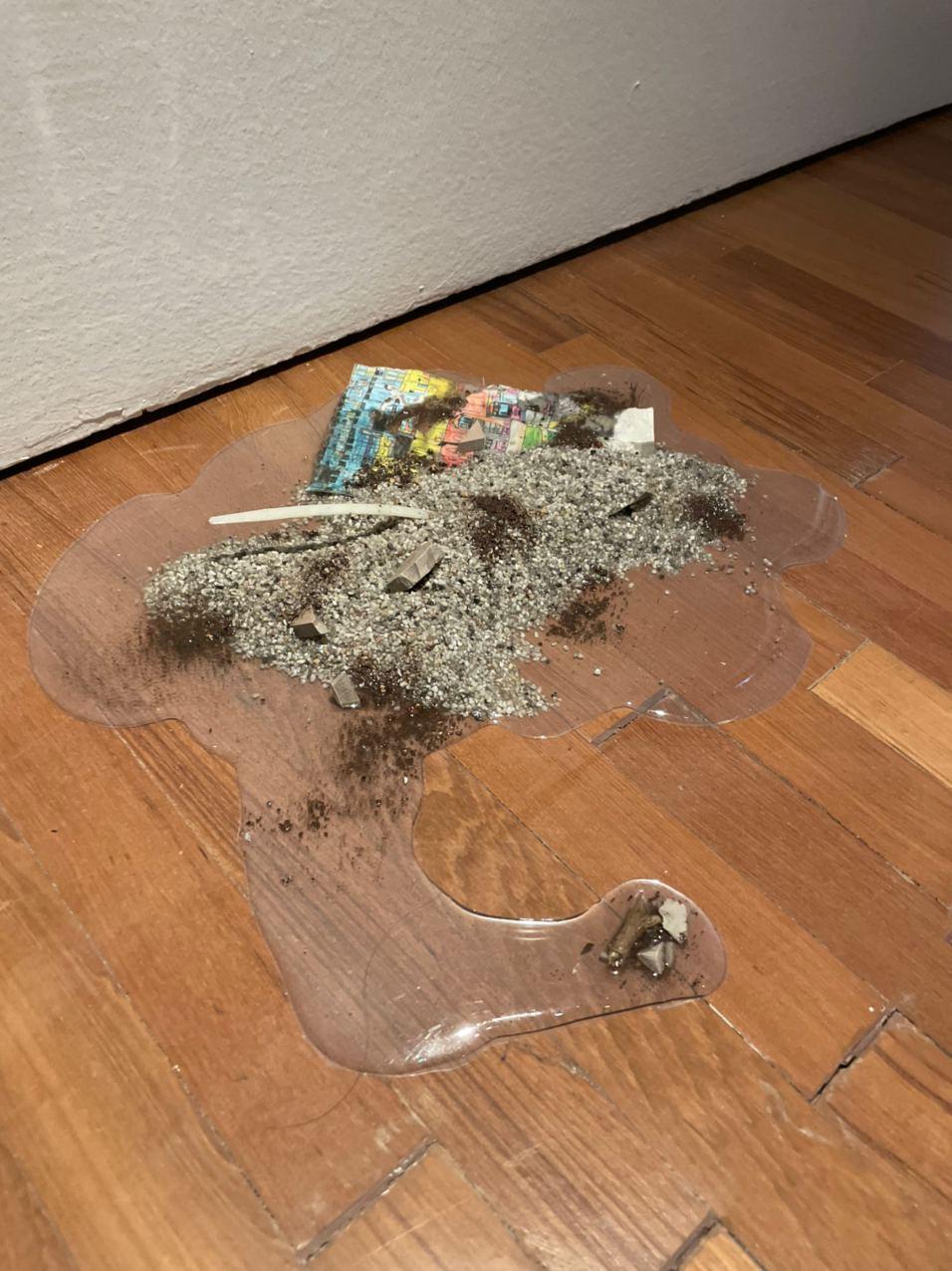 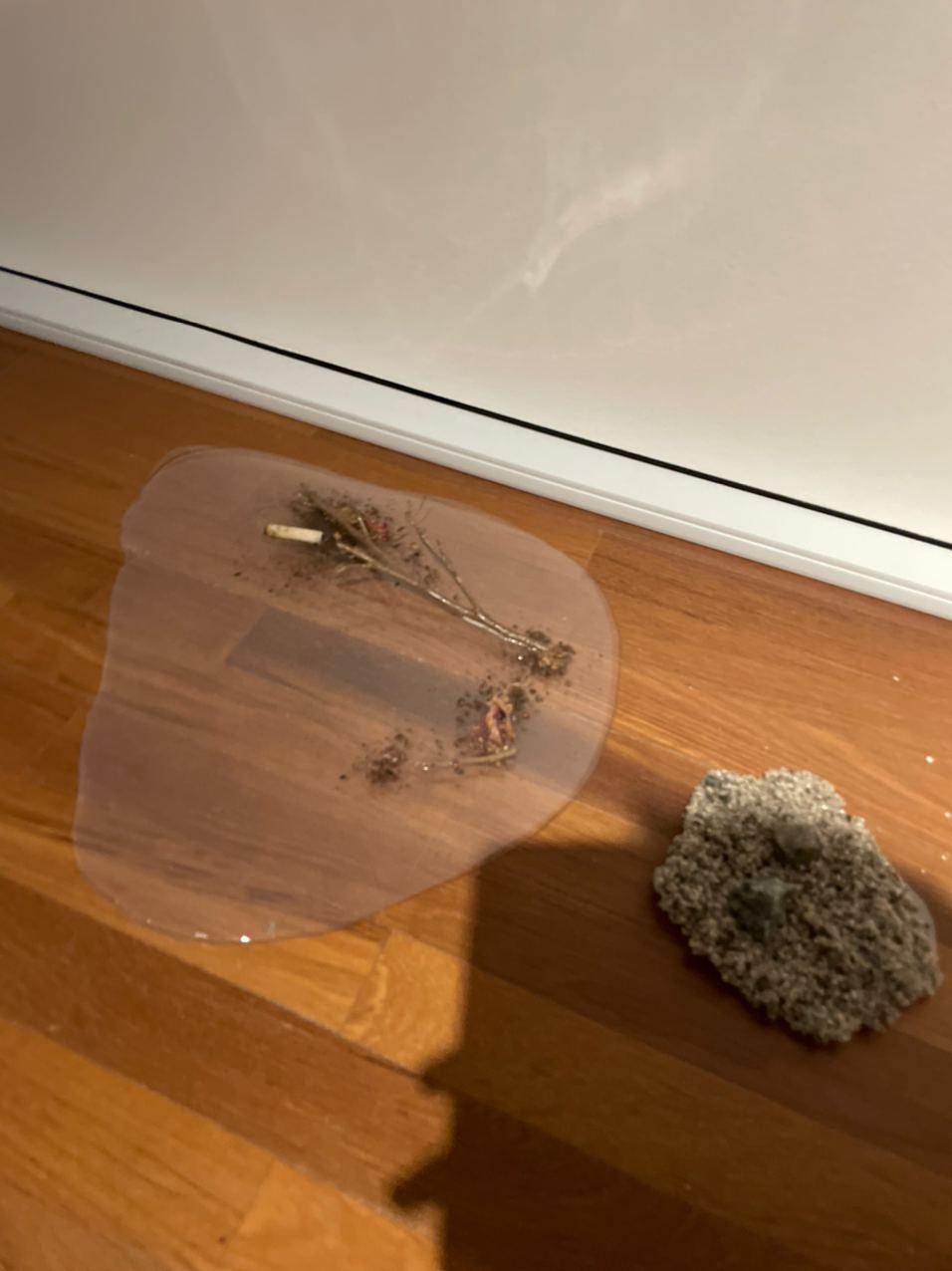 The artist documents some of the snails she encountered in the process of this exploration/work and this is displayed in a simple back to back series of videos on IPads, within the set up. They provide a powerful and real context for the objects on the ground. It is significant to note that she did not use any sort of physical representation or models for the snails. 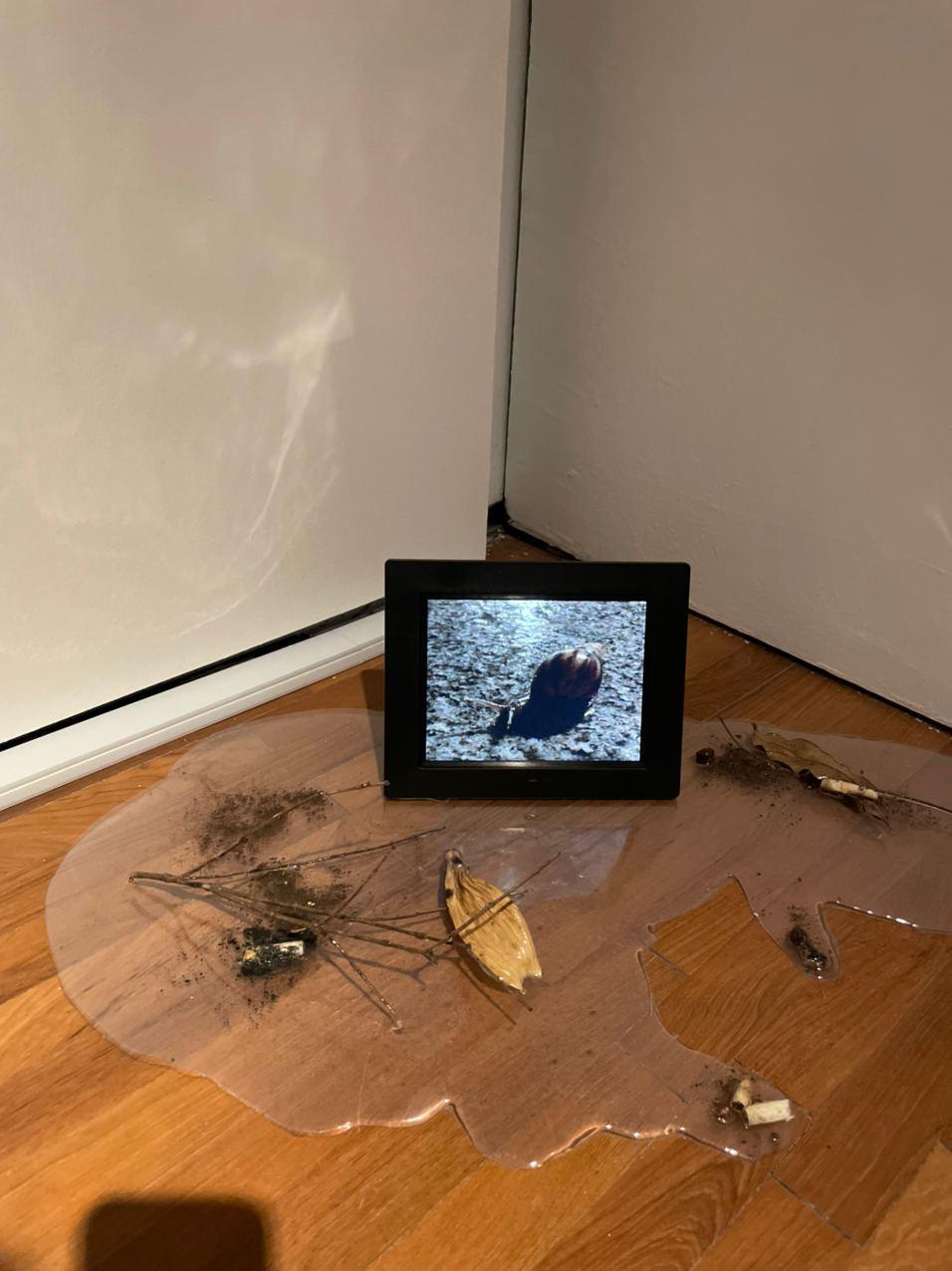 Neither was the damage or the traces of broken shells apparent within any of the ‘puddles’. The only snails are the ones in the video — virtual on screen but albeit real snails. This choice to provide background context while omitting the use of the main subject matter within the other parts of the work allows for us to form our own narrative or thoughts/opinions. Rather than being confrontational about how we destroy or affect the environment around us, her subtle approach eases us into reflecting on that topic intuitively. Personally I found the translucent silicone puddles to be a sort of visual ‘double entendre’ — the first representation being the puddles formed during rainy seasons and the second being the residual slime left behind a snail’s path or left behind when their shell’s are crushed. Whether this was intentional or not, it certainly crossed my mind and the idea of making the remnants of the snail present while maintaining its non existence, enforces the idea of life in transience, while also reminding us that, that very mutable nature of life can leave behind very permanent marks.

When I stood back up and left the work to move on to the next work, my mind was still reflecting on it. The fact that it is relatable and so common, embeds in our minds or subconscious very easily and it is the way the artist engages with the viewers by playing on their intuition and personal experience, that beckons us to ponder about the way we ‘care’ or could care better.

Yeyoon’s works range from interactive digital works to installation art. Her works often involve the juxtaposition of the natural and man-made or organic and inorganic. Her intentional intersecting of ‘spaces’ by displacing objects and creating unexpected experiential spaces, while re creating a familiar scene or set-up, has a subtle yet powerful affect on viewers. By threading on the line between the familiar yet ‘uncanny’ she destabilises our perceptual space and leads us into introspection and wander at the same time.

In the review, Ben Davis explores the phenomena of ‘Social Practice Art’ and its legitimacy, motivations and efficacy. He highlights how much of Social Practice ‘Art’ in some way, is a resistance or revolt against the commodifying and capitalist nature of contemporary art as we know it today — paintings auctioned off for exorbitant prices etc. Works like f’or the love of God’ by Damien Hirst arguably is a grotesquely ideal example of the exclusive, inaccessible and gate keeping characteristic of contemporary art and its associated audience.

With this in mind, one must be careful not to conflate ‘Art’ with ‘Capitalism’ just because of the way it has grown to be propagated or characterised via mainstream channels and popular culture. If we were to do so, then ‘Social Practice Art’ in essence would just be a fixation on capitalism and the politics associated with the system, and stand as a movement rather than an art form per se. ‘Art’ in itself is broad yet, we do not simply confer the term ‘art’ onto anything that is obscure, abstract, or is simply rebellious. Art is some sort of meaningful manifestation of a concept, culture or just personal expression. Its medium is fluid and continues to be increasingly non conforming with the age of technology on the rise — open source art etc. The boundaries that define ‘Art’ continue to expand. Yet there is a certain discipline that governs ‘Art’. And it is important to understand that this ‘discipline’ is not one that requires luxury, privilege or an esteemed fine arts background. Rather — this discipline is rooted in the motivations of the concept, and the approach in which it is executed. Ben Davies states in his review how Nato Thompson calls the gathering by Obama supporters ‘Art’ (“to include the spontaneous eruption of jubilation in Harlem that followed the 2008 election of Barack Obama as a work of street theater.”) The spontaneity of it could be considered as an artistic demonstration — only because there is a pre existing notion or knowledge on what constitutes ‘performance art’ or theatre.

‘Art’ mirrors society — it is not just meaningless or spontaneous events and occurrences (as powerful or controversial as they might be), rather it is the internalising, re interpretation and expression of such events in meaningful ways that reach a wider or targeted audience that makes it art. One does not simply look at a protest or a demonstration and think — this is ‘Social Art’. Rather, only when it is approached, re packaged and then integrated into the circle of ‘Art’ — even through the subtle form of a poster or book, it becomes ‘Art’. This then makes us question the very terminology and legitimacy of ‘Social Practice Art’. However ‘Social Practice Art’ can also be characterised as a probable culture of art and artists who’s intention is to contribute to the ‘betterment’ of society, the critique of social issues, and the integration of the community into Art or rather making the subjects of Art, part of the Art itself. This idea then can also be alluded to Krzysztof Wodiczko’s ‘Poliscar’ in which the ‘Art Work’ in question became a means of communication for the marginalised.

However as in seen in his work, a very tangible ‘product’ or ‘object’ was conceptualised and then used as the vehicle or vessel for the people and the community to be integrated into the work — organically and naturally. To some extent the control is still in the hands of the artist and starts ‘at the table’. It is a top-down process that cascades from artist to art to society — closing the loop back to art, and its inspiration on the other hand is more natural and non linear process — one that requires the Artist himself/herself to very much involved and in touch with social issues they are interested in. To prevent ‘Social Practice Art’ from became a facade — in the way it potentially can become a performative critique of social issues for the sake of appealing to the trends of social justice, there has to be some sort of approach or ‘theory’ to its practice.

The looseness of its term and the lack of any sort of strict criteria — as antithetical as this may sound, will only complicate or jeopardise the idea of contributing back to society. As detailed by the example of the ‘Project Row Houses’ that was intended to decrease homelessness in Houston, but inherently led to increased gentrification, while also having to be supported by huge funds — which essentially are paid by Society through taxes etc, ‘Social Practice’ Art Projects as they are or claim to be, are flawed or rather fallible. Though ‘Art’ should be accessible to all to be practiced, and anyone should be able to ethically engage in some form of project that critiques or highlights an issue they believe deems urgency or awareness, we should not intuitively characterise them by the term ‘Social Practice Art’ due to the very lack of clear definition or efficacy in it as an art form. Any targeted art can be a critique on society but can all ‘Social Practice Art’ (the term as we speak of in this context)  Artworks be deemed effective critiques of Society’s Issues?