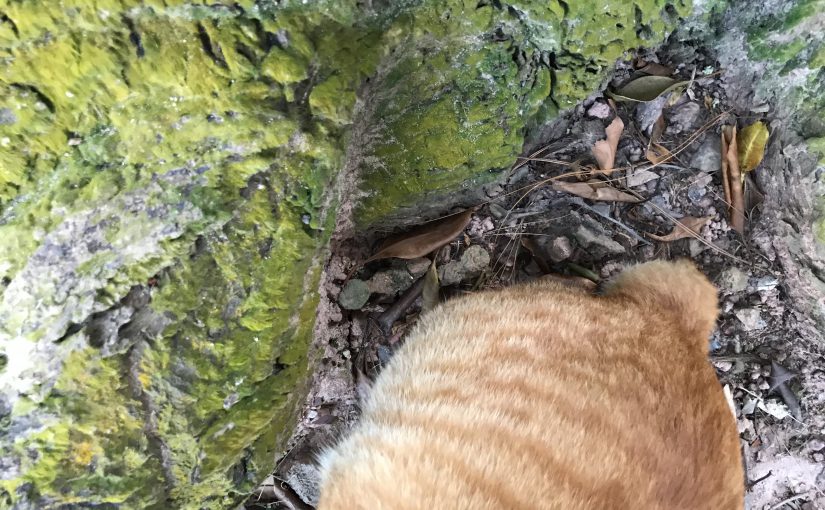 Summarised Updates
Apologies for the delay in uploading this post! This post would cover 4 main components (making up the entire project) which I have been working on:

Initially, I wanted to harvest my own moss, continually sowing and replicating it such that it would make a mossy bed. Hence, I tried to hunt for actual moss around my neighbourhood as I thought that 1) these species of moss are already acclimatised to our hot climate. Hence, the chances of them dying during the actual exhibition could be lower. 2) Should the mosses harvested die, there is always an abundance of more mosses to be collected from the environment. 3) it was, free.

Thus commenced the witch hunt! (I didn’t pluck mosses from nature reserves/preserved areas so I didn’t flout any laws hopefully).

Out of all these local moss species, I identified at least 3 different species – codenamed species A, B and C. Out of all these 3 species, species A was the rarest (I was only able to find it on a single trunk), whereas species C was the most common but hard to transplant onto a different surface.

Some attributes I discovered from my layman observation of the tree species:

Species A
– rare
– most aesthetically pleasing in terms of moss beauty
– easy to transplant (in terms of scraping it off tree trunk)
– ‘cleanest’: not attached to any root/soil material

Verdict: ❌
Usable for project, but impractical due to difficulty in harvesting

Species B
– common
– barely perceivable height
– extremely hard to scrape off
– ‘small presence’: only a huge and enormous quantity of it would make it look substantial
– aesthetically unpleasant

Verdict: ❌
Unusable due to aesthetics not in line with what I have in mind for the moss visuals

Verdict: ✔
Usable, but might experience slight difficulties in creating a ‘blanketed’ moss surface which I had in mind for the final visuals

That being said, I did collect some of the moss in a container and will be monitoring it as my preliminary introduction into the Art of Caring for Mosses. Based on my first few days of caring for the mosses, I realised that they were indeed very hardy – without much water, or sunlight, they were still, green. It was very good news indeed. I will be continuing to monitor the mosses, and am considering setting up an experimental set up of mosses in the dark so as to stimulate present conditions of the moss within the final installation set up.

Thus, I resigned and would attempt to instead buy moss online. Initially I decided against it as this would become a considerable budget for my project but moss as the product was essential to this study, hence the consideration was overthrown.

In the current market, there are very limited sellers selling purely moss for terrarium uses. I could only purchase dry mosses, as I did not want to deal with additional difficulty of submerging the mosses inside water (most mosses are wet mosses, and much more easily available). However, I shortlisted two sellers who might be able to provide Live Holland Moss for the project. It was important to buy live moss, rather than dehydrated or dried moss which cannot be revived for the project.

Side tracking a wee bit – I actually found out the species of moss (haircap moss) which I saw in Japanese gardens, but the local market does not provide sales of this particular moss species.

It was indeed a pity, as haircap mosses are more apparent, and have a slightly more protruded surface/texture which might make the moss carpet seem more lively. Holland moss, on the other hand, had a more grass carpeted surface, making it theoretically easier to blend and create a more even moss carpeted surface.

The two sellers shortlisted are: Ecophonics and Zantelle. The budget for an estimated 17 x 12cm/6.7 x 4.7 inches sized carton of Holland moss (based on size specification given by Ecophonics) would cost an estimated $8. I would imagine that I would need ~8 clumps for each tray I would have (cost: $64 sgd for each tray of moss?).

I will be purchasing the moss soon, along with glow lights (to be confirmed and done by end of this week).

This was one of the most prevalent aspects of the installation, yet one of the most worrying at the same time. For this machine, I experienced several difficulties in creating the build and rotation mechanism. As an add on from last week’s cardboard mechanism which didn’t work out smoothly enough, I created another more stable structure which I will be partially adopting into the final design.

Unfortunately, this would require much more time than expected, as there was a delay in purchasing materials and building. In my consultation with Prof LPD, he recommended essential reinforcement of the tray, and rotating arms with flange mounts/bearings, and for the rotating mechanism, implement a gear system which would control the speed and rotate both the tray and the glow lights (as another rotating mechanic entity from the first moss machine).

This gear system would be powered by a solo (for now) powerful motor, namely the wiper motor. The wiper motor is a motor originally used as the windshield wiper, and would be powerful enough to drive the entire gear mechanism. However, visits to sim lim tower to purchase this elusive motor proved to be wasted, and I would need additional time to purchase it online (via Ezbuy or Amazon). In addition, details were missing from my sketch/second prototype, thus I spent the week trying to polish up and make a working sketch and push through with the machine specifics.

(Refer to above figure) The base of the machine would be created using wood, while the arm would be made using acrylic. The gear (unlike what was sketched) would be only attached to one rotating arm, but I would be inserting a metal rod which will extend towards both rotating arms and provide stability, and hopefully, enough rotational power.

As for the tray, I hope to be able to use acrylic (as it is waterproof and able to take the misting required to water the moss daily), but am unsure of that at the moment as the acrylic might not be strong enough to handle the weight and pressure of the plants, movements and whatnots. It would take testing to iron out these concerns.

While the last few posts have already written about the concept in different permutations, I have jotted it down to make it more concrete and less airy. Please refer to the above figure on the specifics.

Regarding the projection, I will schedule another OSS post on Friday to talk more about it. As of now, I would be utilising the number of times the trays rotate, and using this data to create imagery to be projected on a singular wall (for now).

I would require one projector for this aspect.