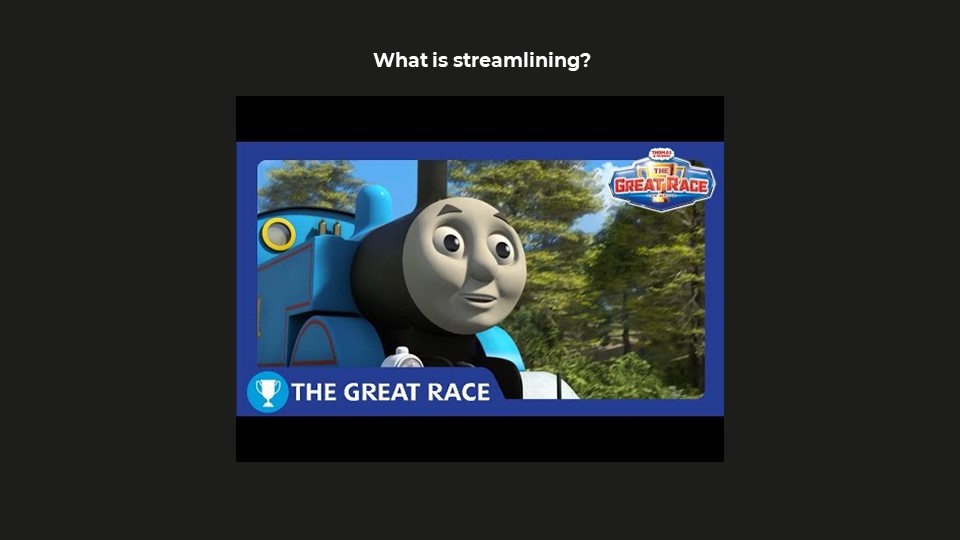 In the 40s and 50s, multiple design movements overlapped with and existed simultaneously in America, some of which originated from Europe, namely the International Style, Machine Age, Streamlining and Organic Design. Such movements were prefaced by historical circumstances that gave people reason to use design as a common language to assert their opinions in order to drive society towards a new direction towards a more orderly and organic design language after the chaos of World War I. 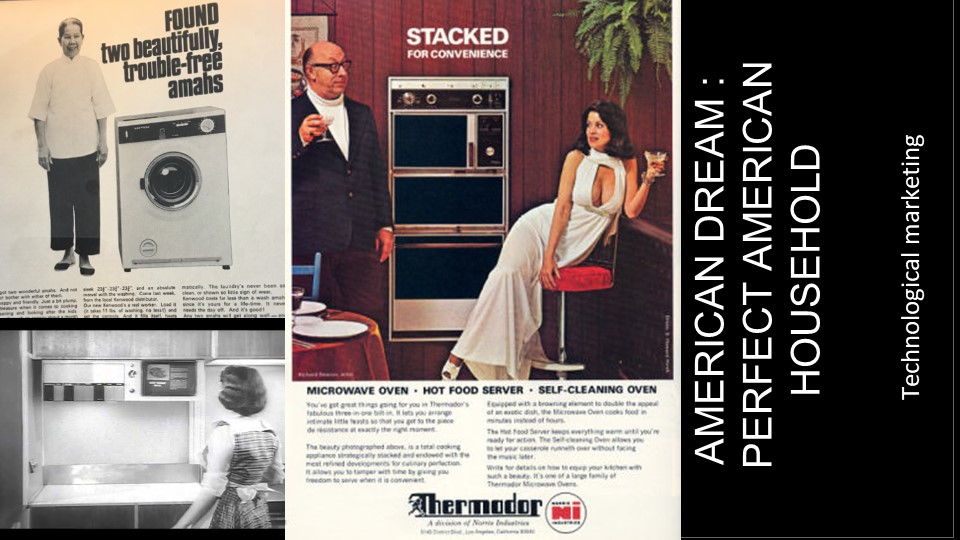 Following World War 1, the Machine Age (1920s) saw to the celebration of technology, machinery and the mass production of transportation during the Industrial Revolution. household items and other electronic devices. During this time period, Henry Ford perfected his assembly one automobiles, creating affordable, mass-produced cars for the average person. Literature during this period such as Brave New World highlights efficiency, production and consumerism as the most important values in society. Exponential scientific discovery motivated more exploratory and innovative designs. Designers such as Peter Behrens and Marcel Breuer designed buildings, home appliances that were functional but unobstructed designs which featured exposed screws and undecorated surfaces. (Donald J. Bush, 2017) Many designs resembled parts of the machines that produced them and were devoid of an individual’s touch. 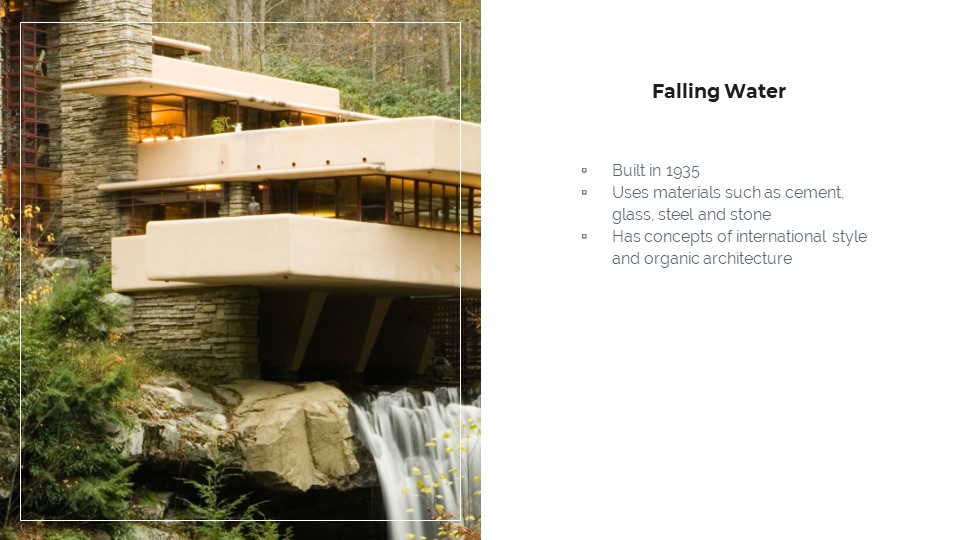 The International Style (1920s to 1930s), one of the first styles to emerge post-war, which was a largely architectural modernist movement coined by European architects Henry-Russell Hitchcock and Philip Johnson at the Museum of Modern Art in New York. This style saw to the construction of rectilinear buildings using mainly steel, concrete and glass, light and the removal of excess ornamentation from buildings, giving it a sense of architectural integrity. (Clericuzio, P. 2018) Some of the most prolific designers who contributed to the International Style are Le Corbusier, Ludwig Mies van der Rohe, Walter Gropius and Oud. Frank Lloyd Wright. Le Corbusier’s design of Villa de Savoye was a quintessential example of the movement. (“Modern architecture: International exhibition”, MoMA catalogue, 1932). There was also the use of cantilever construction that lessen the need for bulky, heavy structural columns and made open interior spaces more feasible. Consequentially, there was also rapid erection of skyscrapers during this period of time, an example being the Philadelphia Savings Fund Society building (1932), the first International Style building to be built in 1932 during the Great Depression, which featured practicality in the prioritisation of volume over mass and balance over symmetry. (Dupré, J, 1996) 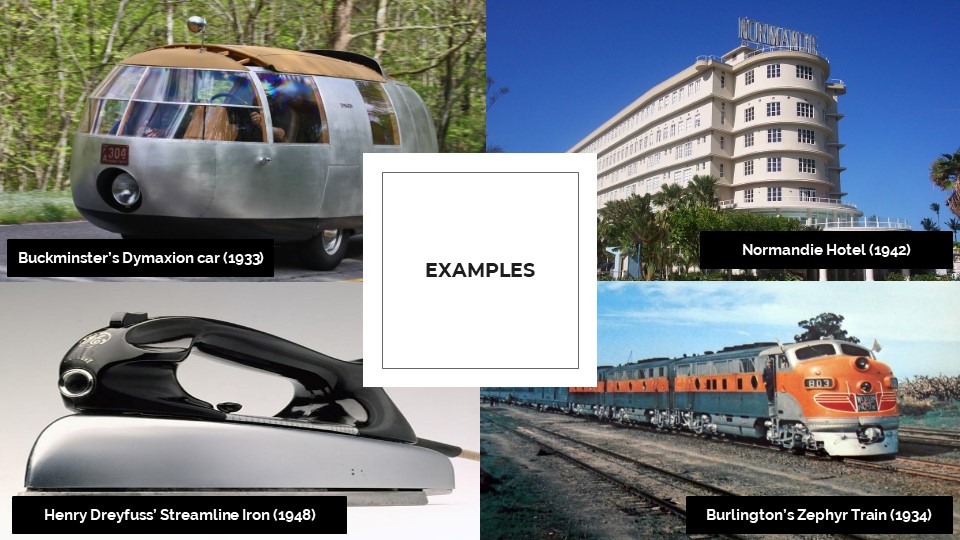 While the machine age successfully introduced the mass production of transport and goods, it also caused many people to accept the “haphazard, disorderly look” (Carma. R, 2000) of such inventions and Streamline Moderne (1930s), which was popularised by Norman Bel Geddes in his book “Horizons” (1932),  served as a movement to re-introduce appreciation for the aesthetics of mass-produced goods. Streamline Moderne products often resembled forms of fast-moving transport machines such as trains and cars that took into account factors of laminar and turbulent flow of the wind and combatted wind resistance since the movement was driven by the desire for speed and efficiency such as with Buckminster’s Dymaxion car (1933) and Burlington’s Zephyr Train (1934). There many curves included in designs to exude dynamic functionalism in static structures as inspired by the Futurism movement that preceded this movement. The motifs of reductionist and continuity were adopted as speed and efficiency were desirable goals during the chaos of World War 1 and the Great Depression.(Donald J., 2017)  The acknowledgement of the women proportion of consumers was also evident with the increase in streamlined household products (Kowalik, W., 2017), such as with Henry Dreyfuss’s Streamline Iron resembling a typical streamlined train. The modernising of domestic surroundings allowed for the celebration of progress in technological advancement while enjoying forms that are more curvilinear and colourful compared to designs of International Style and symbolised economic growth in society. 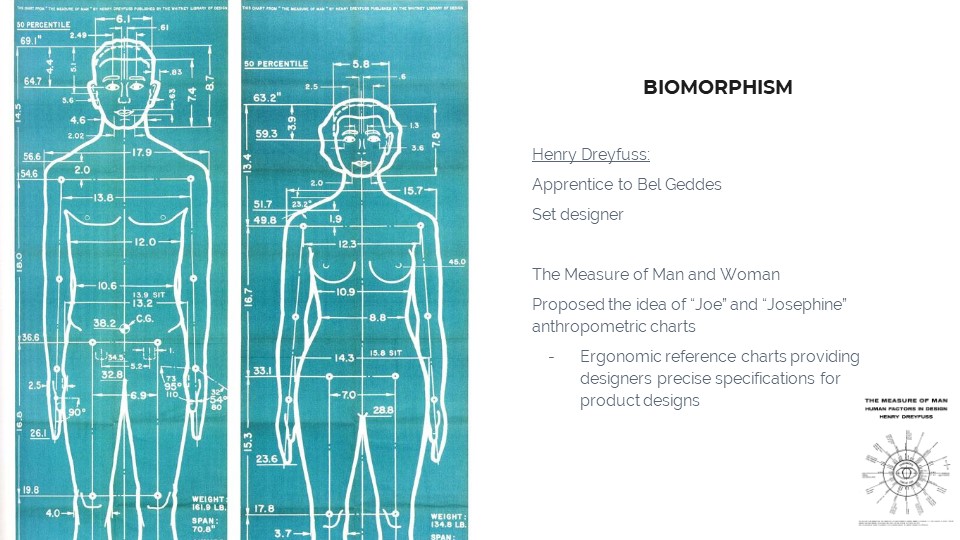 Following streamlining the rise of organic design and bi-morphism. “Organic design” (1930s – 1960s) was coined by the architect Frank Lloyd Wright who was interested in the relationship between buildings and their surrounding environments and designed buildings that used incorporated natural elements such as light, plants and water with open spaces that provided a place for natural foliage to grow, and is most evident in his design of Fallingwater in southwestern Pennsylvania. (“Organic Architecture”, Guggenheim, 2016) Organic design borrowed its philosophy from the art movements of Surrealist and Art Nouveau movements that preceded it, including many curvilinear forms and nature motifs (Alloway L., 2005) while staying true to the motto of “form follows function” as coined by Louis Sullivan. Designs that incorporated Biomorphism, coined by Geoffrey Grigson in 1935, highlights the importance of anthropometry, which puts the human user at the centre of design. Designers like Charles Eames and Eero Saarinen who created the Womb Chair (1946) and Alvar Aalto who created the Paimio armchair (1932) created chairs that were made of natural materials and fit the shape of the human body. Ideal body measurement charts such as Modulor by Le Corbusier and “Joe” and “Josephine” by Henry Dreyfuss were also developed for product designers to design their products in a more ergonomic manner. Organic design was able to incorporate the human psyche into their designs and which made it more appealing to consumers and helped to drive the economy during the Great Depression.

In conclusion, under historical circumstances, design played differing roles that served to help society. As such, design trends responded to the state of society at any point of time. From mass-produced products with no personal flavour to the development of a design-thinking methodology which is user-orientated. Even today, it is hard for designers to divorce the concept of their design from human psyche in order to appeal to the masses, as can be seen from the priority of user-experience in 21st century design.

One thought on “American and European Design in the 40s-50s”