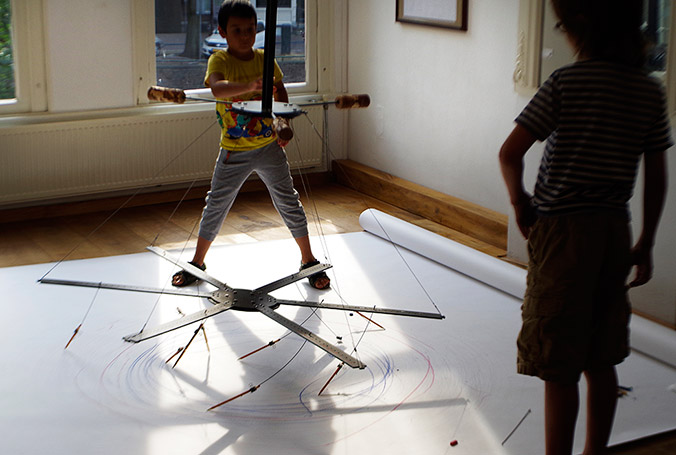 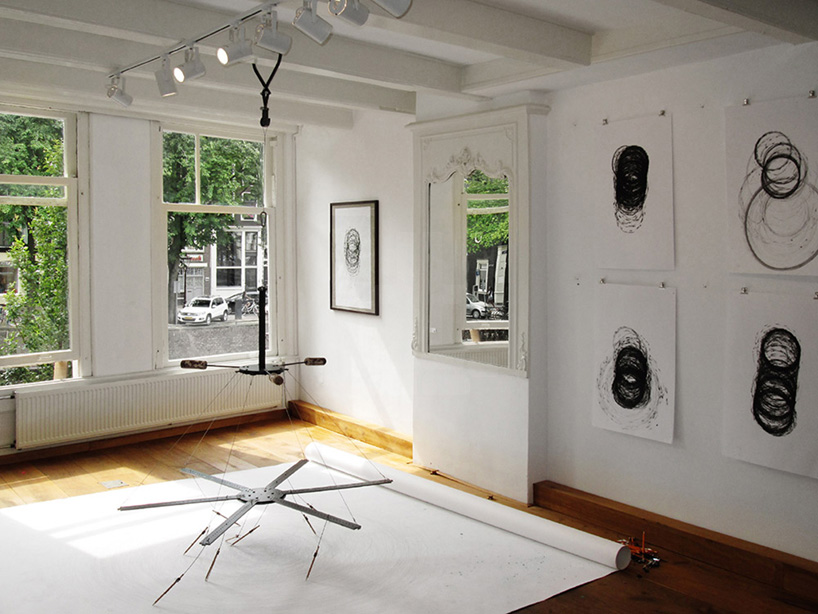 This alpha rotator was created by françois xavier saint georges, showcased in Amsterdam, Original Dampkring Gallery. The rotator are hung on the ceiling and has 6 arms, each with 26 holes that represents a alphabet. To interact with this device, user will place the pencil in each arms’s hole according to the word they wanted. Upon completion, user will need to push either of the handle above to construct the encrypted message. The pencils will gently draw against the paper that place on the floor. Final outcome of the word become encrypted message are filled with layers of lines, shades that would never be a second same piece.

The pros of this artwork involved engagement in the viewer and provide them with a different experience in writing. I find it interesting that the artist designate the hole to each alphabet to form a word. At the same time, viewer are given a chance to participate and being an artist themselves by constructing the final piece. Creating the one and only piece instead of the literal writing.

However, the whole process could be quite time consuming although it can be really fun to play with. Probably machine can be implemented to adjust the position of the alphabet by viewer can key in their desire word to a computer and during their turn every thing will be automated. It can be quite interesting to see the machine move itself too! I feel there are also potential in this artwork to be use in group interactive controller. The 6 arms can be change into 3 platform that holds 3 person. They need to corporate together to change the direction of the controller to control the game character. In which it involve balancing and communication with team.

Overall, alpha rotator created a different experience for user to explore in writing making the user an artist. The change of position, a viewer to a creator provides sense of ownership and satisfaction would leave them deep impression.

I also came across this artwork called Study for Fifteen Points. The moving LED caught my attention as all of it are moving in different direction. Yet the later part of the video reveal that at one viewpoint we can see that each LED represent a point of a human walking. I felt this was not much of interactive device but something interesting to share with.