“Sometimes the monster is the man.” – Victor Frankenstein (2015)

Brief overview
The movie is based on contemporary adaptations of Mary Shelley’s 1818 novel Frankenstein. Told from Igor, a former circus freak’s perspective, it shows his  friendship with the young medical student, Victor Frankenstein. Through Igor’s eyes, the audience witnesses the emergence of Frankenstein as the man from the legend we know today.

Victor is expelled from college for his ungodly creations, but is approached by his wealthy, arrogant classmate, Finnegan, who wants him to create an artificial humanoid creature. Finnegan provides Igor and Victor with the necessary funds to build it in his family’s estate in Scotland. When Igor refuses to go, Finnegan kidnaps and binds him, revealing his plans to kill Victor once he finishes his creation, and weaponize it.

The quote is from the first lines of the movie. Igor starts the movie by voicing over with:

“You know this story. The crack if lightning. A mad genius. An unholy creation. The world, of course, remembers the monster, not the man. But sometimes, when you look closely, there’s more to a tale. Sometimes the monster is the man.”

I felt that this quote could be interpreted in two ways:

I decided to focus on the second interpretation as in the movie, Victor had some redemptive qualities, such as rescuing Igor from the circus, and straightening out his back such that Igor was no longer a hunchback. As mentioned above, the real monster in the movie was Finnegan.

The film is set in Victorian England, where the men wore bowler hats, walked with walking sticks, and the like. With Victor’s biomechanical humanoid creatures resembling steampunk, I also thought of imbuing a steampunk aesthetic.

At first, I tried compositions in which duality were explored. 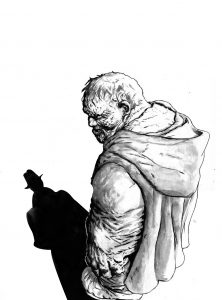 In the first composition, a monstrous being’s shadow is a man, with the shadow showing the true self. I felt that this was a very cliche and seen too many times. 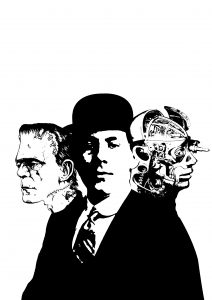 In the second composition, I made a three-headed monster of my own, with a traditional Frankenstein, and a bionic monster like the ones Victor was making in the movie. It didn’t look like a monster as much as the central figure having two different alter egos, which wasn’t really the case. 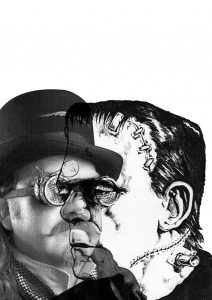 In the third composition, I overlaid a figure head with the same traditional Frankenstein such that the eyes were overlapping – I was trying to incorporate the Gestalt law of invariance. However, again, I felt that this composition could be slightly confusing as again, it seemed to have to do with alter egos rather than the innate nature of man.

I then thought about why we would even need an actual man to represent man – it is, after all, a very in-your-face way to show a man. Hence, I started working with symbols of man: a bowler hat and a suit sleeve.

I was inspired by Dan Hillier’s merging of animal and human characteristics. 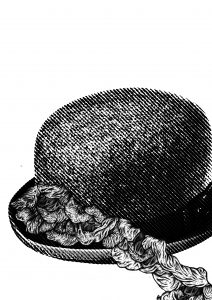 The monster need not be a traditional monster; the monstrous effect could possibly be achieved through entrails to evoke revulsion in viewer. While I liked the idea of not having a literal monster, it seems too much like random juxtaposition.

I tried different styles of bowler hats but didn’t like the aesthetic of it. Instead of entrails, I used robot monster-like parts to make the bowler hat into a monstrous creation itself. However, this attempt looked more sci-fi than monstrous – while the movie is science fiction, I realized I have a tendency to get carried away in representing the movie rather than the quote, and felt that I needed to bring back the focus to showing a monster.

I realized I could relate it back to the movie through a deeper meaning, hence I revisited the second interpretation of the quote: that the real monster was Finnegan for his betrayal of Victor. I felt uncomfortable with the earlier compositions where it was implied that Victor was the monster, even though it is easy for us to think of Victor that way. However, I think that those who have seen the movie would agree with me that Finnegan was the monster in this situation. 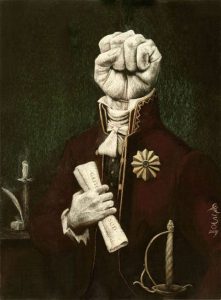 I was inspired by this work by Santiago Carruso where the head is replaced by a hand – I then tried replacing part of the hand with monstrous elements.

I aimed to convey the idea of betrayal with one of the hands in a handshake having some sort of monstrous element, to imply that one of the parties involved was the monster.

I was inspired by these two works by Redmek Hoestra and Mr Bingo respectively.

I was also inspired by how Diego Max uses sci-fi elements in his compositions. 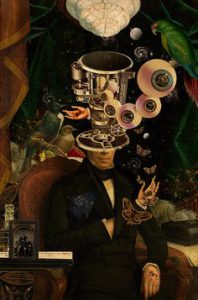 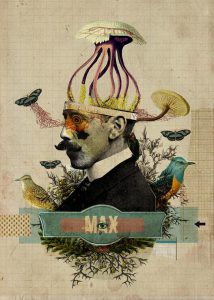 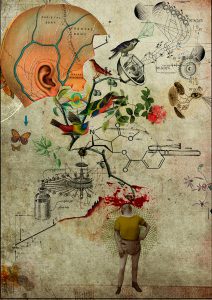 I also liked how Randy Mora made such weirdly beautiful compositions, with sci-fi elements, again. 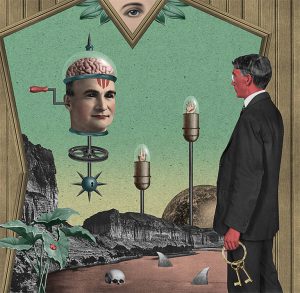 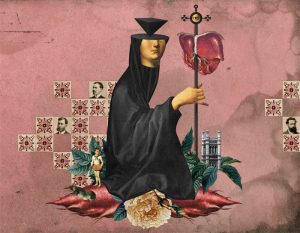 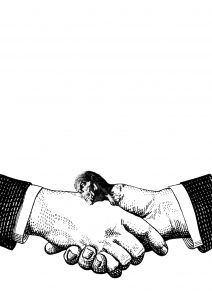 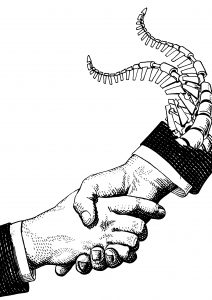 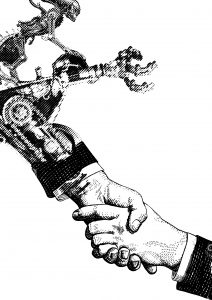