Link to our proposal: https://oss.adm.ntu.edu.sg/nura0069/interactive-storytelling-proposal/

We got feedback from Ruyi on our proposal that there were too many things going on – the strict parents, the lesbian relationship, Sarah going missing (and eventually dying), and Denise having to find out.

We also did not really portray the romantic aspect of the relationship, with Ruyi commenting that it looked more like a friendship, which we definitely agreed with. We tried to make it more romantic in our final video with an implied kiss scene: https://www.youtube.com/watch?v=7aKxPyMCPgs

Blue is The Warmest Colour explores the relationship between Adele and Emma – Emma is the more free-spirited, “Artist” type. Apart from using it for the cinematic reference, we also referenced the “I Knew You Were Trouble” music video for its portrayal of Taylor’s love interest as one who is crazy and wild, whilst Taylor is the ‘good girl’ who later becomes more wild as her relationship with her love interest progresses. As we had run into problems giving Sarah and Denise more character, I referenced this video to give both of the characters more distinct personalities.

I did a lot of the writing, including the quotes for the jar, blog and the development of Sarah’s and Denise’s personalities. I also did up the scenes for the storyboard. I took a lot of inspiration from poetry, specifically Lang Leav’s works. The storyboarding was also pretty fun because I rewatched some Korean dramas for some ideas.

I ran into some difficulties while making the blog. I had to find a theme which did not show the post date because I was posting all of these posts on the same day, which did not make sense for the story. This was a lot harder than I thought it would be, especially because I needed the blog to look like a teenage girl’s blog. Here are some other blog themes I tried out:

I tried to have a mix of word posts, poetry and picture posts to simulate a tumblr blog, as well. I also tried to have a relatively large number of posts – 28, to be exact – to make the blog seem believable, as if she had been writing in it for a long time. 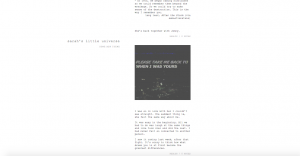 Acting as Denise was actually pretty hard for me because I could not stop laughing. While I had acted for theater plays previously, I found it super awkward being filmed, especially for the “intimate scenes”. Ying Hui made it a lot easier on me though, because we both found kindred spirits in each other’s awkwardness.

I also learnt a lot about character development, as I came to develop the characters more after the feedback on the proposal. The character profile really helped with that, especially with research into Character Archetypes.

In hindsight, we could’ve paid more attention to details – one common feedback was that it was confusing why my name was Denise when I’m so obviously Indian. Honestly, we had initially named our characters D and SO based off what we learnt in 3D class about Dominant (D), Subdominant (SD) and Subordinate (SO), and Denise was D because she’s the more dominant one and Sarah was SO because she’s the “subordinate”.