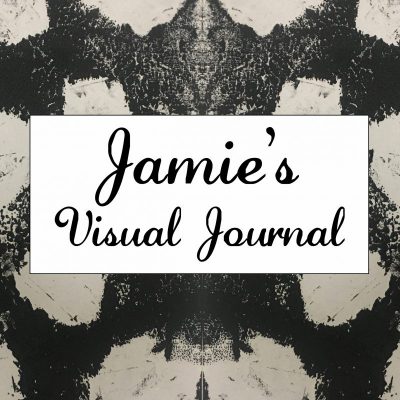 I did some researching on Tate, on artists that did mark-making and I found 2, Ernest Wilhelm Nay and Mark Rothko. Below are the artworks produced by them! 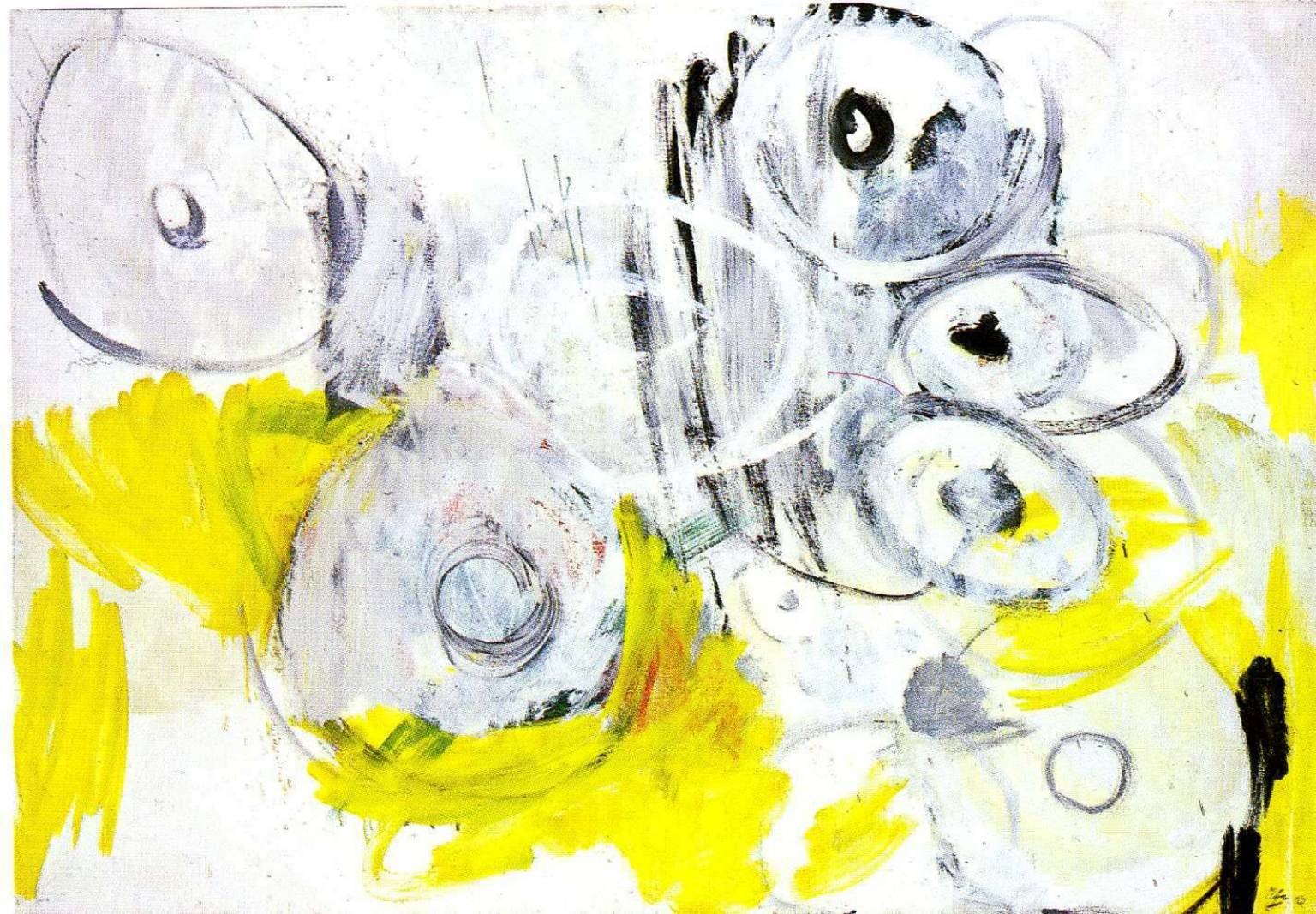 Nay was the leading figure in the generation of German painters who reinvented expressionism in the climate of post-war abstraction. White Springshows his ability to maintain an immensely subtle and individual use of colour in the midst of apparent speed and concentrated energy. It is one of the last in his Disks series (1955-63), which are predominantly composed of circles which loosen, grow and fragment under the control of linear elements. For Nay, the disks possessed a fundamental and universal significance, free of personal connotations, in spite of the clear presence of the mark-making of the artist. 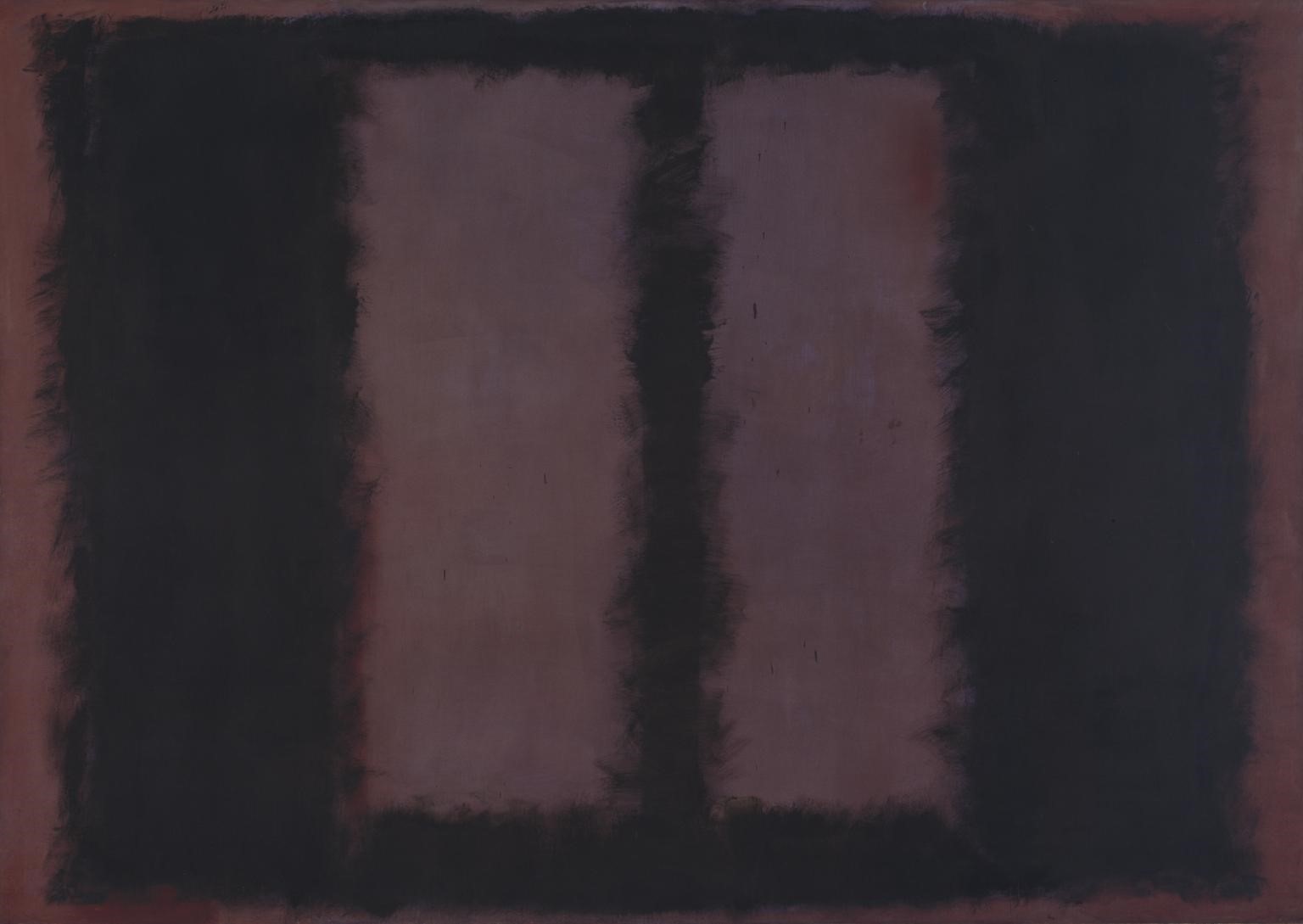 Black on Maroon is a large unframed oil painting on a horizontally orientated rectangular canvas. The base colour of the painting is a deep maroon. As is suggested by the work’s title, this is overlaid with a large black rectangle, which in turn encloses two slimmer, vertical maroon rectangles, suggesting a window-like structure. The black paint forms a solid block of colour but the edges are feathered, blurring into the areas of maroon. Different pigments have been used within the maroon, blending the colour from a deep wine to a muted mauve with accents of red. This changing tone gives a sense of depth in an otherwise abstract composition.

Till then, xoxo,
jamz 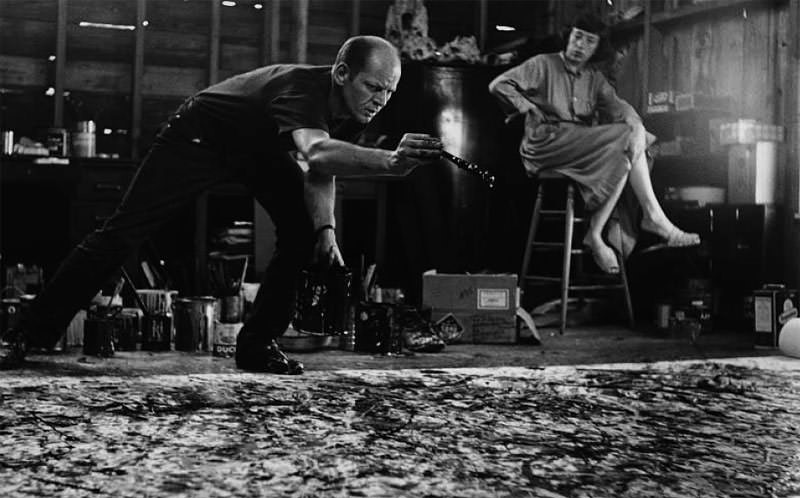 A very famous abstract artist, Jackson Pollock is a familiar name in the art industry. He was well known for his unique style of drip painting. 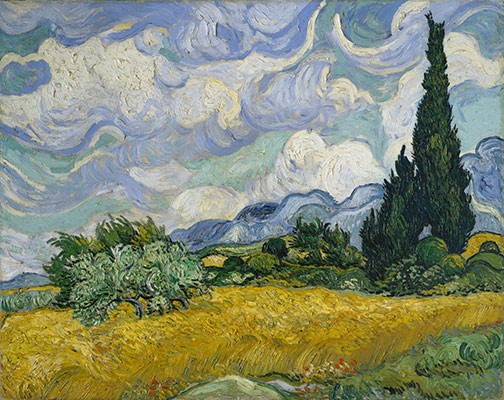 Vincent Van Gogh is a Dutch post-impressionist artist. In many of his artworks, he used very expressive brushwork, which contributed to the foundations of modern art.

I was very inspired by his art works and how he used his brushworks to evoke emotions. I wanted to follow his style of doing, but I didn’t want to use a brush. Thus, I used a fork instead. I dripped white paint on several spots on the strip of paper. Next, with the fork, I took some black paint, and started applying strokes of it on top of the white paint. To me, it looked a little like latte art, just more expressive. It turned out better than expected, and I used it as one of my emo lines.

Gestalt is also known as the “Law of Simplicity” or the “Law of Pragnanz” (the entire figure or configuration), which states that every stimulus is perceived in its most simple form.

Gestalt theorists followed the basic principle that the whole is greater than the sum of its parts. In other words, the whole (a picture, a car) carried a different and altogether greater meaning than its individual components (paint, canvas, brush; or tire, paint, metal, respectively). In viewing the “whole,” a cognitive process takes place – the mind makes a leap from comprehending the parts to realizing the whole,

We visually and psychologically attempt to make order out of chaos, to create harmony or structure from seemingly disconnected bits of information.

The satisfaction of a pattern encoded, as it were, into the brain, thus triggering recognition of the stimulus. This can involve the brain’s provision of missing details thought to be a part of a potential pattern, or, once closure is achieved, the elimination of details unnecessary to establish a pattern match.

I wanted to apply gestalt principles to one of my strips, by the usage of negative and positive space to evoke the emotion between it. For one of my emo lines, I deliberately used tape to keep the negative spaces, and then painted the rest of the positive space.

Paper marbling is a method of aqueous surface design, which can produce patterns similar to smooth marble or other kinds of stone. The patterns are the result of color floated on either plain water or a viscous solution known as size, and then carefully transferred to an absorbent surface, such as paper or fabric. Through several centuries, people have applied marbled materials to a variety of surfaces. It is often employed as a writing surface for calligraphy, and especially book covers and endpapers in bookbinding and stationery. Part of its appeal is that each print is a unique monotype. 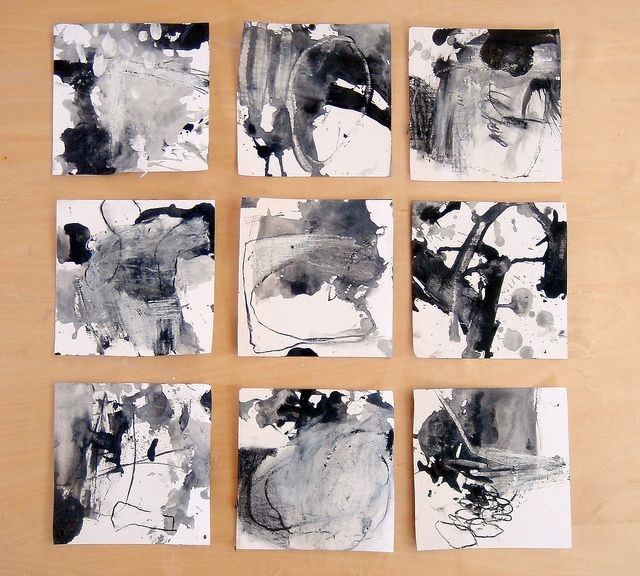 I was interested in experimenting with Paper Marbling, as one of the mediums/technique to use for my lines. I did research online on the various techniques of paper marbling and there were several. From a website, https://www.homesciencetools.com/a/two-marble-paper-projects, there were 2 methods on how to do water marbling. The first method was to use shaving cream with food colouring/paint. The second method was a little more complicated, to use mainly cornstarch, water and paint. After researching online, I found that many artists use the second method more. A variety of colours was also used, and it looked very whimsical.

2 artists I found that did paper marbling was Heidi Finley & Robert Wu.

Robert Wu, is a paper marbling artist from Toronto whom used traditional techniques to create marbled paper. His prints are all one of a kind, and cannot be replicated.  He manages a website, www.studiorobertwu.com, where he sells his prints. 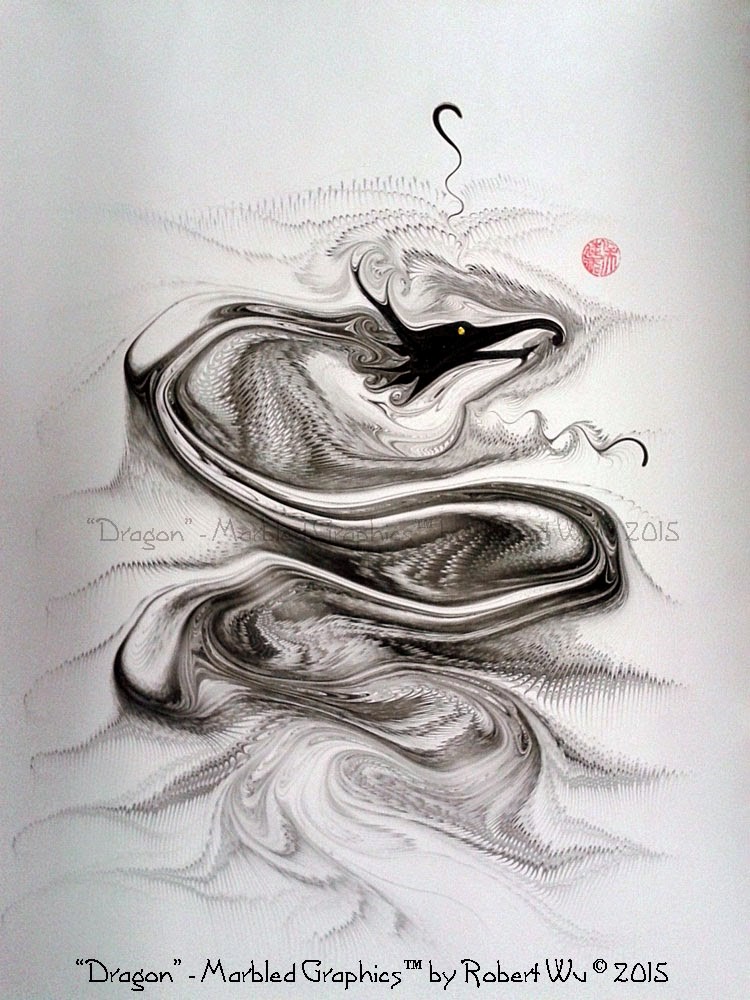 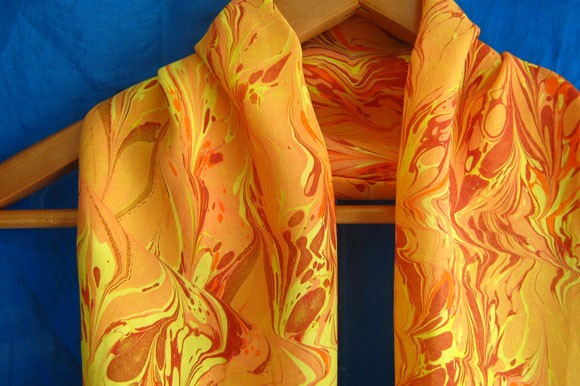 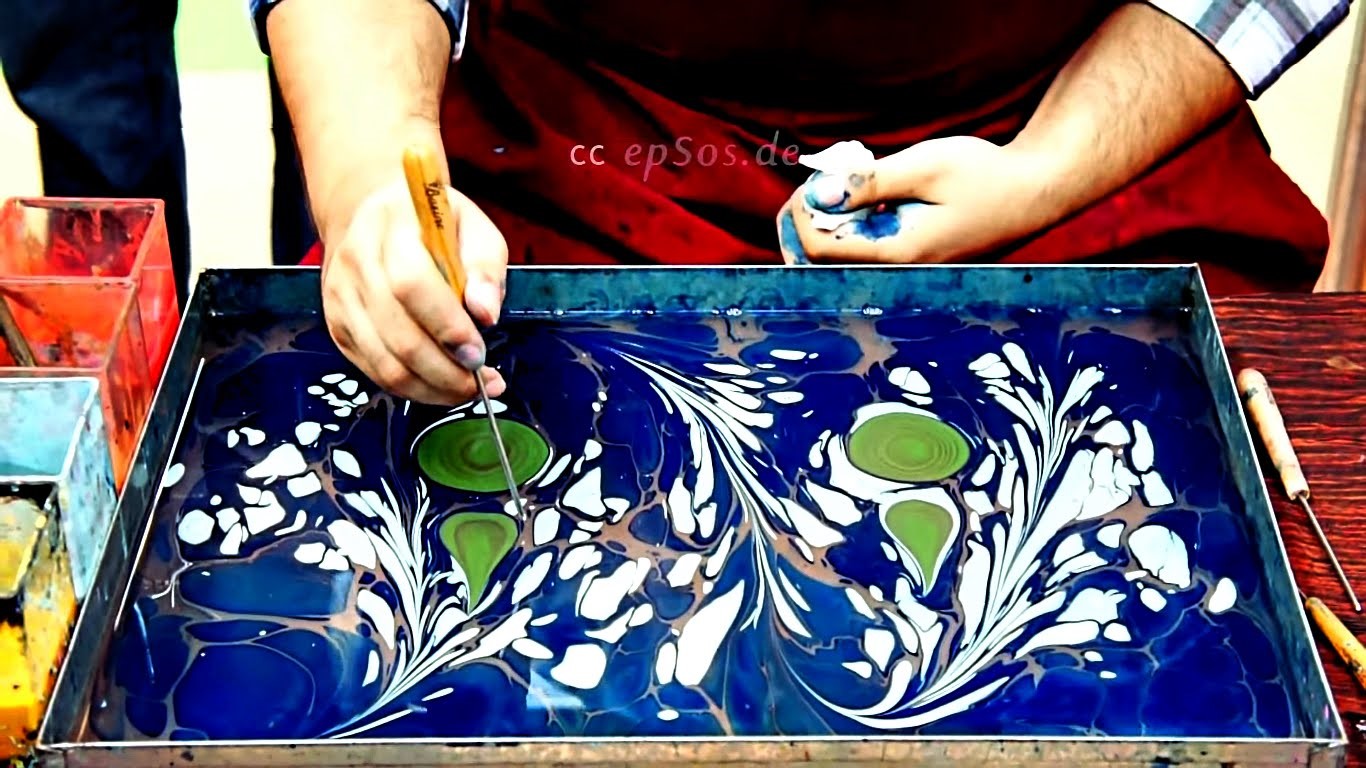 From the research, I realized many did paper marbling with a variety of colours, made the design on water and then dipped the paper in. I felt that the design of the usual marbling was too messy and complicate for the emotion I was going for, as I wanted to just experiment with black and white.

Thus, I decided to use only Chinese ink and water to create the design. I first dropped a few drops of Chinese ink into an aluminium tray of water, and it naturally formed a random marbled design. 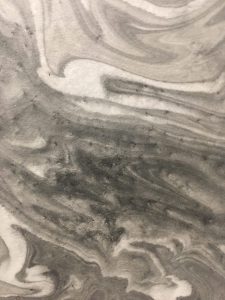 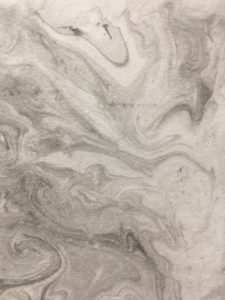 I then took a strip of paper and briefly slid through the water, just enough to get some marbled effect. The first few strips turned out surprisingly nice, but was very complicated as there was a lot of marbled details. I wanted to show ecstasy in paper marbling. After a few tries, I churned out the most suitable paper marbling emotion.

Till then,
xoxo,
jamz