Through this presentation, I set out for myself to learn how art developed in that country through visual and contextual analysis. A big debate was about whether their religious ivory art has strong influences from its own country or was the Philippines merely a mass producer of these objects. From my research, it was hard to pinpoint styles or techniques that could be linked between traditional Filipino art and the ivories. That’s a debate not meant for a short reflection.

I really enjoyed pondering over these thoughts. Someone from the class claims that the Santos are Filipino art,  but the style and techniques come from elsewhere. Rather, from what was said, the Filipinos tend to favor the Santos more than other cultures, so perhaps that is what gives them a sense of ownership over the Santos.

The Philippines has a long history of colonialism, rebellions, and wars. It would be interesting to learn more about what types of art came out of that period – maybe poems?

I have learned a lot more about blue-and-white wares, and have become more aware of the way museums are run, over the course of this project. First of all, thinking about how museums artifacts can be arranged gave me insight into how artifacts don’t really stand alone – artifacts usually have some form of connection to each other, either across time or through cultural interactions. Because this was a gradual realization, it was especially difficult to decide on our four objects and how they might be related. What if we had chosen some objects that just could not be related to each other? We decided to play it safe by choosing 4 blue-and-white wares because they were already similar in style.

It got challenging when we were trying to figure out what was expected of us. At first, I thought that we were going to create a room with the four artifacts we had chosen but then we were told to relate our objects to the blue-and-white room at the ACM. It was a challenge because the objects we had chosen were 4 unique blue-and-white wares and we wanted to focus on their uniqueness from the rest. That was my mistake because then it belittles the other blue-and-white wares in the exhibit (again, I thought that we only had to worry about our 4 objects). The blue-and-white wares in the ACM all have a story to tell and it would be foolish to attempt that through 4 very different blue-and-white wares. Through our observations, we realized that our objects all had influences from different parts of the world, which got us thinking about how cultures mixed around in the past. It just so happened that secondary school students have a topic on globalization in their syllabus of Social Studies, which gave us a target audience to set on.

From there we faced our 2nd challenge – engaging secondary school students. As much as it is a stereotype, most secondary school students would have no interest in museums if not for being a field trip location. What we hoped to achieve was to ‘wow’ them with stunning illustrations and visuals with minimal text-based information to distance ourselves from school textbooks.

The 3rd challenge was mainly for me. I’m bad with design. I would not trust myself with it. Furthermore, I did not have the software to do it so I had to use the school computers when there were no ongoing classes. It was an entirely tedious process for me. Still, eventually, it was completed. I appreciate what museums do with their brochures more now, especially the somewhat recent Angkor Wat/Cambodia exhibit’s booklet. There were many entertaining and interactive activities that must have taken a lot of talent and hard work.

What was your favorite object that you saw during our visit? 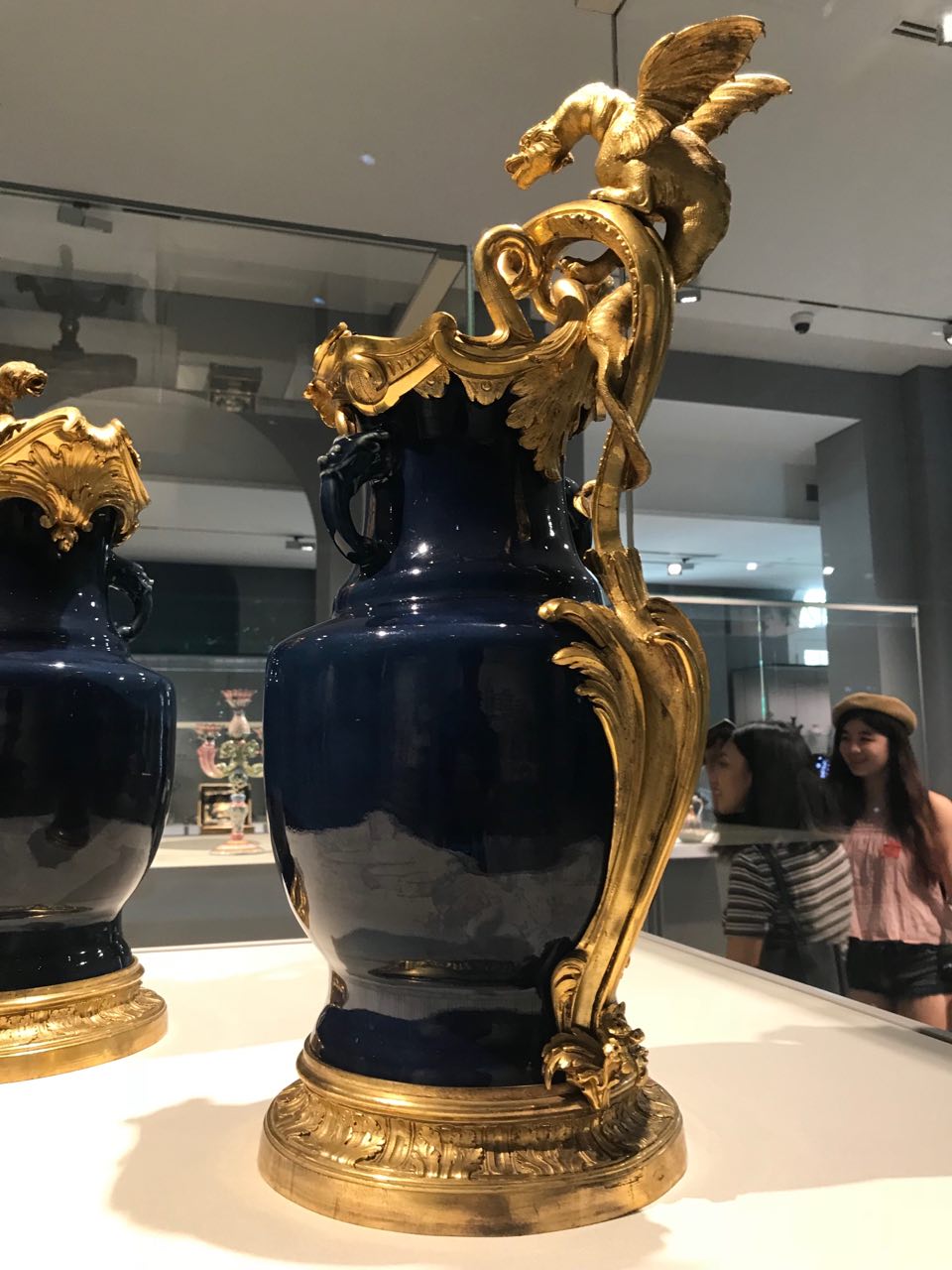 I was captivated by this blue porcelain jar from China. The contrast of the bright gilded bronze mounts and the deep blue glaze- the subtle Eastern dragon on the handles and the bombastic Western dragon attached to an extravagant handle with floral motifs that seem to be in dynamic movement. What amazed me even more were the subtle details within the blue glaze – the wonderful landscapes reminiscent of Guo Xi’s own creations. This beautiful blend of East meets West in motifs as well as styles highlights the impact of trade in bringing cultures together.

Not because of laziness but because of lack of knowledge in the contemporary arts, I found this artwork in the Asian Civilisations Museum. The work is of sails with images of children from Singapore and Indonesia on them; made of wood and bark fibre from banana trees which are common to both countries.

It is inspired by the song Dayung Sampan, which was a popular folk song in both Singapore and Indonesia.

Personally, I feel that this engagement with the premodern in terms of materials and motifs evokes a sense of simplicity and historical richness in our cultural interactions of the past. It reminds me of trade – of resources, luxury goods, innovation, and religion. The images of children evoke a sense of innocence that came along with the interactions; one with no discrimination or prejudice. Migrant workers, to my knowledge, in Singapore have had a bad reputation for stealing jobs and opportunities and perhaps this work is trying to enlighten the viewers; to bring us back to our roots; to learn the positive examples of our past.

This week, we watched a video on Vasco da Gama by PBS Education, which was part of their series called Explorers: Age of Encounter. Apart from Zheng He and the Arab navigator in Malindi, who else is missing from these Eurocentric narratives? Hint: Watch the video on Magellan!

Navigating through the PBS website, I happened upon an explorer by the name of Ibn Battuta of Tangier. He was a Muslim Moroccan explorer who traveled to parts of Africa, Asia, and Spain from 1325 to 1354.

While he did not discover unknown lands. He is known as the “traveler of Islam”; having traveled 75,000 miles and interacted with least 60 rulers across the areas he visited.

He visited almost every Muslim country and a number of non-Muslim ones.

I found it frustrating at how challenging it was to find information on non-European explorers- at how when I search for explorer during the Age of Encounter, I get results for the top 10 European Explorers or the most important explorers, all of which were European. It paints a complex story about history is told differently from different perspectives and personally I feel that, much like history, art is not an exception to this.

The question of whether the bronzes should be returned to Benin is a matter of ideal morality and practicality. Let us ignore where money has travelled as a result of these bronzes being moved. On one hand, these spoils of war should be returned to their country because they are items of heritage and culture, and the people of Benin deserve to grow up around items belonging to their culture and past. On the other hand, Benin does not have the resources necessary to manage these artifacts as well as the other countries do.

An impractical solution would be for the countries holding these bronzes to build facilities to hold and showcase these bronzes in their country of origin, as well as to provide and teach the skills needed to maintain these artifacts. Of course, no country would approve of this because there would be nothing to be visibly gained from this action. It does, however, solve the problems of not being in their country of origin and the maintenance of these artifacts.

What are your thoughts on this video on art history?

While it does address the reasons why we might not like art history, it does not find solutions for these reasons. We still sit in dark rooms listening to the professor speak. We still remember names and dates.

There are practical solutions to these problems, which is to have an engaging professor or to make remembering names and dates less of a chore. This one could be achieved by giving students the autonomy to connect the timelines of different artworks and seeing how they relate to each other. In this, the speaker has mentioned how there is a non-linear timeline to art and there is no one “hero” of this journey. Instead, there are many different people from all over the world, interacting with each other and it would be more enriching to see the similarities and differences to different artworks not just across the world, but also through time.