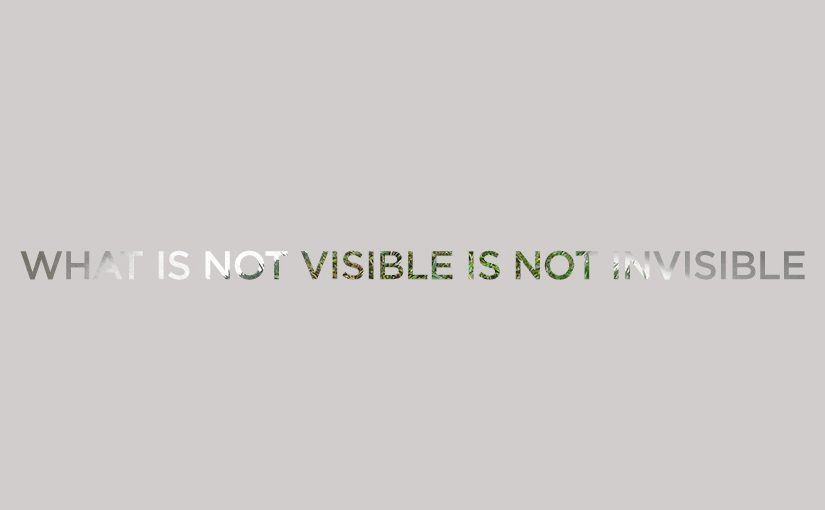 Part 1: Choose any current exhibition in Singapore (except for “Future World” at ArtScience), visit it and write a response.  Select particular work(s) in the exhibit which inspire or interest you and do some research to find out how the work was developed and additional information about the artist.

What is not visible is not invisible; National Musuem of Singapore

What is not visible is not invisible – the title of the exhibition postulates that beyond the 2 distinct opposites of black, a more deep-seeded area of grey exists.

The title and design of this exhibition was inspired by the artwork of a similar title by French artist Julien Discrit – a lighted-text installation that lights up only when triggered by motion – paradoxically, the need to make seen the not visible can only be realised after being seen (visible). The exhibition, which features video, installations and sculptures, tries to bring to the surface deeper philosophical themes, through the uncustomary forms of art-making.

The exhibition reveals the not visible: the abstract, through the revisiting of both organic and structured forms of art. The exhibition layout adopted took the form of a fixed path, bringing the audience through a proportionate mixture of video and structural art, ultimately starting and ending with the artwork What is not visible is not invisible.

The deliberate placement of that artwork challenges our thoughts, of realising the absence of the not visible firstly through text, but later, through a series of thought-provoking artwork. By touring through the whole exhibition in a circular manner, one walks around the entire physical space, and metaphorically, concurrently expands the philosophical space of understanding.

This post will focus on two artworks in the exhibit, Grass Grows, and Blue Sail by Hans Haccke.

Hans Haccke (b. 1936) is a German-born conceptual artist whose process and materials are constantly changing. He favours creating minimalist sculptures from industrial materials and found objects. In the late 1950s to early 1960s, he joined part of an international art movement called Zero, where most of the works were monochromatic, geometric, kinetic and gestural. Zero also utilised nontraditional materials such as fire, water, light, and kinetic effects, which are reflected in Haccke’s pieces.

Despite his status as a conceptual artist, he prefers to label his art as thought provoking, rather than as conceptual pieces.

Blue Sail features a fragile fragment of chiffon blue silk floating softly above a fan blowing above situated on the floor, Haccke labels it as a sculpture, questioning the status of art-making and production. The structure of Blue Sail remains nostalgically organic, with undulations unfurling gently, akin to waves of water, but created with non-traditional materials such as chiffon silk, and a fan. It reflects Haccke’s philosophy of debating against compartmentalisation.

“A ‘sculpture’ that physically reacts to its environment is no longer to be regarded as an object. The range of outside factors affecting it, as well as its own radius of action, reach beyond the space it materially occupies. It thus merges with the environment in a relationship that is better understood as a ‘system’ of interdependent processes. These processes evolve without the viewer’s empathy. He becomes a witness. A system is not imagined, it is real.”.

Thus with reference to Haccke, everything we are exposed to contributes to our view of the world – and with his artwork, he attempts to destroy the conceived status of the forced narrative of a sculpture, expanding and not constraining the borders of art.

Grass Grows is a unique art piece featuring a mound of grass growing, oblivious to the conditions of the environment. The grass continues to grow, and exist as a system largely segregated from the cold floor of the museum, as an autonomous entity. Haccke uses this organic artwork to question the constitutional constrains of art, of its economic and political conditions.

There are few components in the installation Blue Sail, and set-up is considerably simple – strategic placement of the few materials would help to create the work.

As for the artwork Grass Grows, the installation setup simply comprises of digging up a perfect round mound of soil, taken from the ‘institutional roof’ where it originally grew at, and placing it in the set position, on the floor. However, the artwork requires the frequent watering, lest the grass dies.