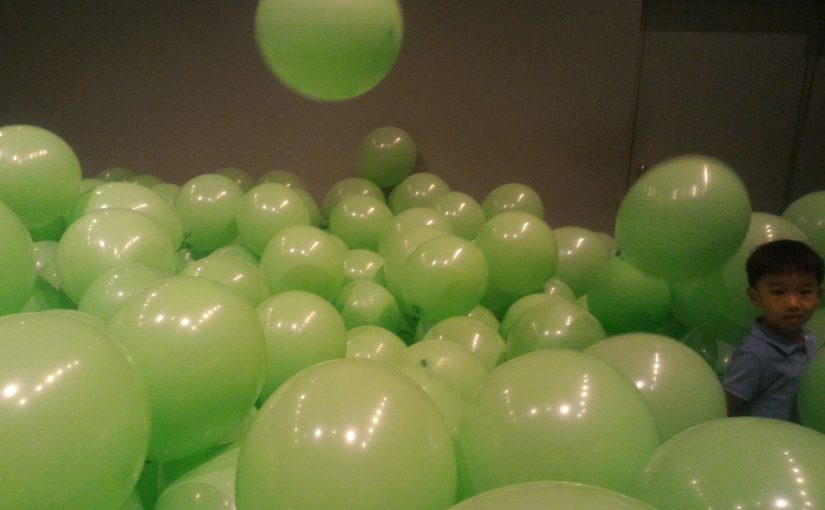 Sole presence of single bulb leads us to have a wider visual field. The space looks expanded. Space within a space.

Spatial tension between lightbulbs of varying distance. Tension at different points differ. Clustered form at the corner. Radial forms – starting from the corner. Hierarchy from the side. Some sort of rhythm.

Linear form (a series of forms arranged sequentially in a row). Grid form (a set of modular forms related and regulated by a three-D grid) Liner form has been manipulated to form repetitive, enclosed a portion of space. Equality gives repetition. Visual field is mostly occupied by the bulbs. Layering of diff planes, multiples of overhead plane. Symmetrical.

Analysis of space in artworks

Analyse an artwork (to do with space) and discuss its architecture. 3 different works.

Consisting of aluminium and steel utensils, there is a certain rhythm to the artwork, creating a particular space within the larger space. Repetitive objects (despite not being of similar shapes) create a symmetrical plane of the sphere-shape. White space is preserved for roundabout circulation of walking.

2. Half of the Air in the Given Space, Martin Creed

Artwork is displayed at the Singapore Art Museum as part of the What is not visible is not invisible exhibit, in collaboration with the Singapore Biennale.

This artwork presents an interesting debate; architecture mainly brings about notions of solid items. However in this case, what is solid is made out of something not solid, and vice-versa. The balloons provide a constant repetition, and the artworks are constantly changing in spatial arena – but standardising blanketing the lower plane of the enclosed box-space.

3. Home Within Home, Do Ho Suh

Artwork is displayed at the MMCA, Korea.

An artwork the most similar out of the three stated here that looks much like the typical architecture. The ‘walls’ are instead not made out of plaster, but rather, silk. It is an outright representation of space within space, the Seoul home enclosed and floating in the middle of the outer home. The four planes (right, left, opposite right and left) are parallel planes to the opposing home. There is a hierarchy – the outer home having a stronger ‘power’ than the inner home due to the spatial placement. There are no interlocking between the two homes, showing distinctiveness and separateness.