For the first part of our second project, we were tasked to conduct a 5-min presentation on a unique place in Singapore of our choice.

For a more hi-res view, please refer to: Slides-FA.compressed

The place I chose was Keong Saik Road. Because of its popularity as a trendy hangout spot for high-end restaurants, eateries, and bars, I wanted to do a powerpoint presentation in the style of a virtual dining experience. At the same time, I was hoping it’ll be a more interesting method of presenting! After conducting research, I also came to realise that Keong Saik Road, despite its popularity today as an F&B enclave, was once a notorious red-light district in the olden days.

The visuals of the presentation consisted of mainly hand-drawn illustrations accompanied with Photoshop textures and images.

Finding a mix of both quantitative and qualitative data, the research methods I adopted for this project were secondary research and primary research techniques. The techniques involved were:

Primary Research: Site recces, first-hand accounts from myself and others, and surveys

The first slide comprises of an image of the recognisable 1939 building (where Potato Head Folk now resides) with the title in a neon lights kind of typeface and colour.

Because of Keong Saik Road’s popularity as a spot for nightlife, as well as the fact that it was once a red-light district, I thought using neon lights to introduce the place seemed fitting.

To make for a more interesting and visually appealing contents page, while sticking to the ‘dining experience’ theme, the outline of the presentation was done according to a fictional restaurant at an iconic shophouse at Keong Saik Road.

Following the order of going for dinner at a restaurant, I tried to structure my presentation accordingly:

1) Looking at the menu: An introduction into Keong Saik Road

The first segment of the presentation gives a brief introduction of Keong Saik Road and an insight into its history. To give context to my classmates who have not heard of/been to Keong Saik Road, I gave them an overview of:

Keong Saik Road in the Past

This segment of the presentation was done in the style of a menu. To complement the idea of this segment giving an overview of the place, looking at the menu of a restaurant serves the same purpose. 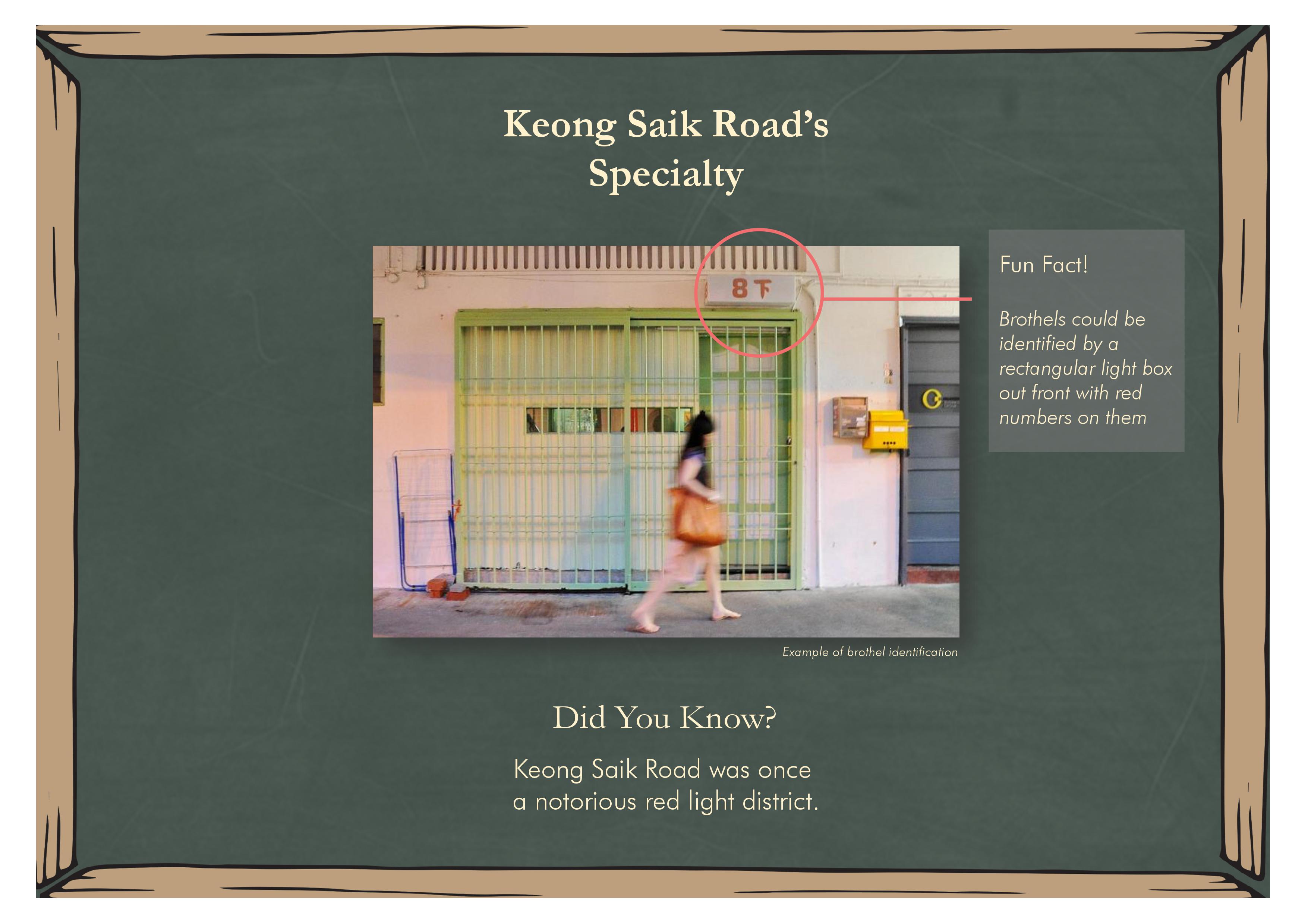 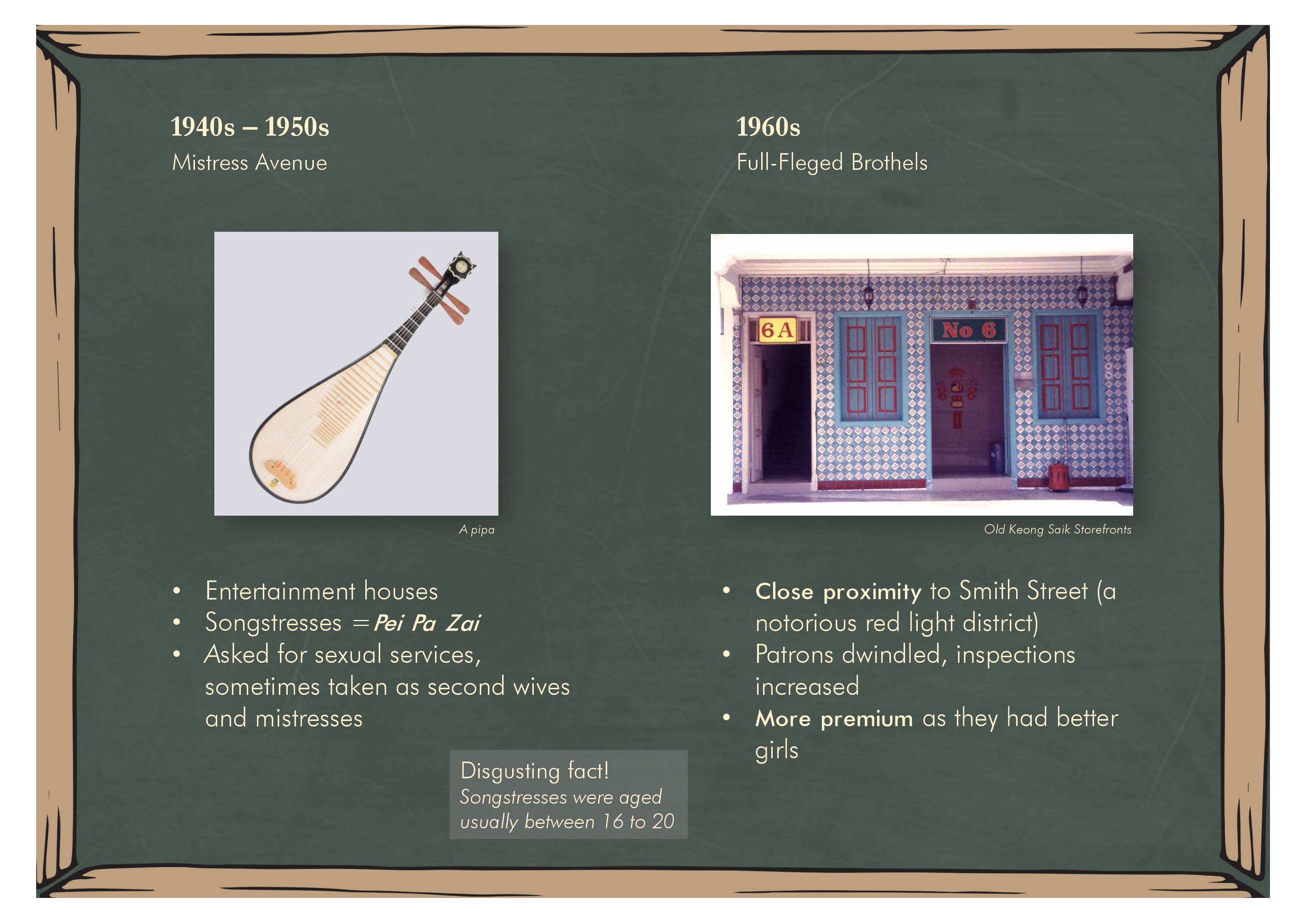 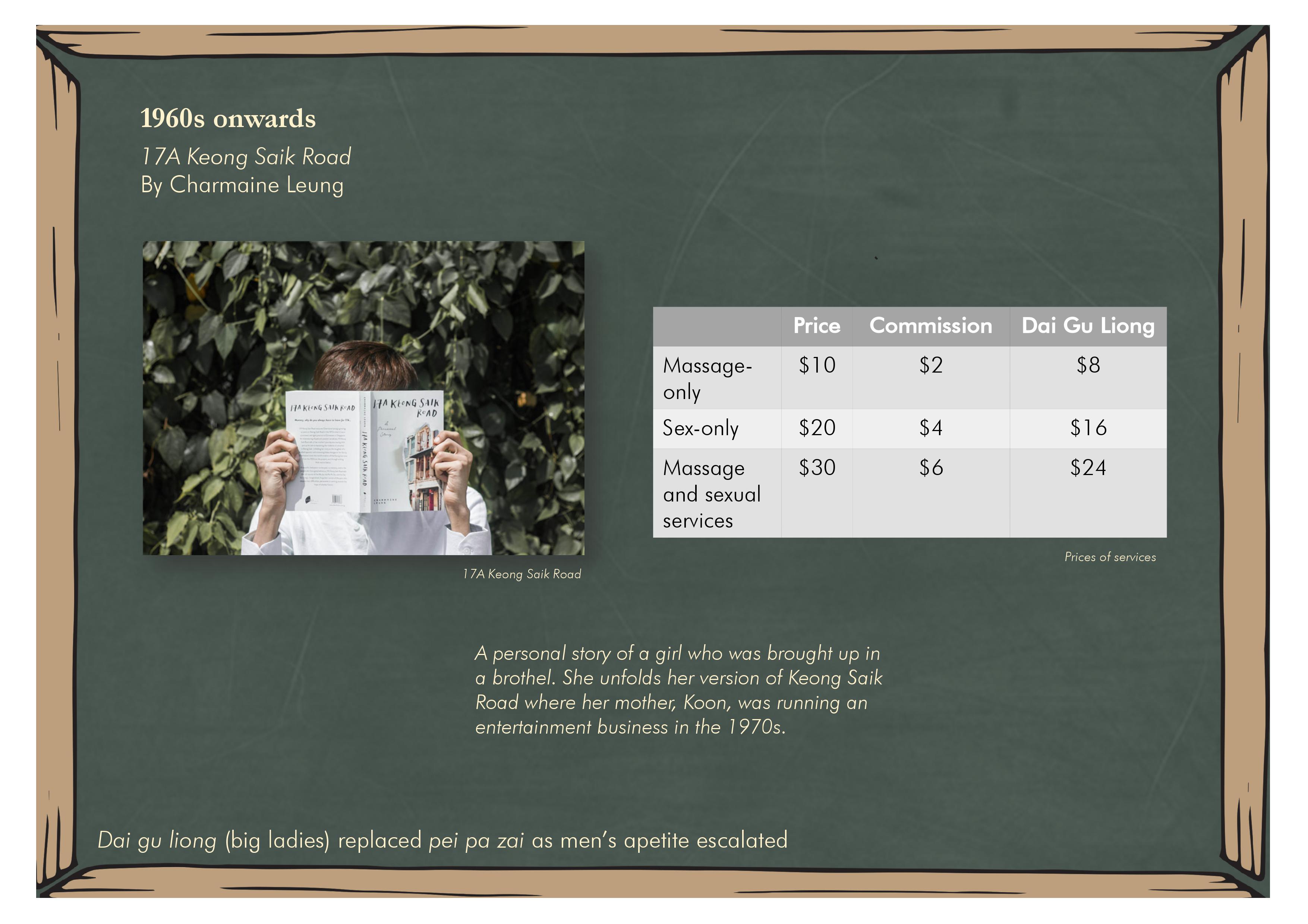 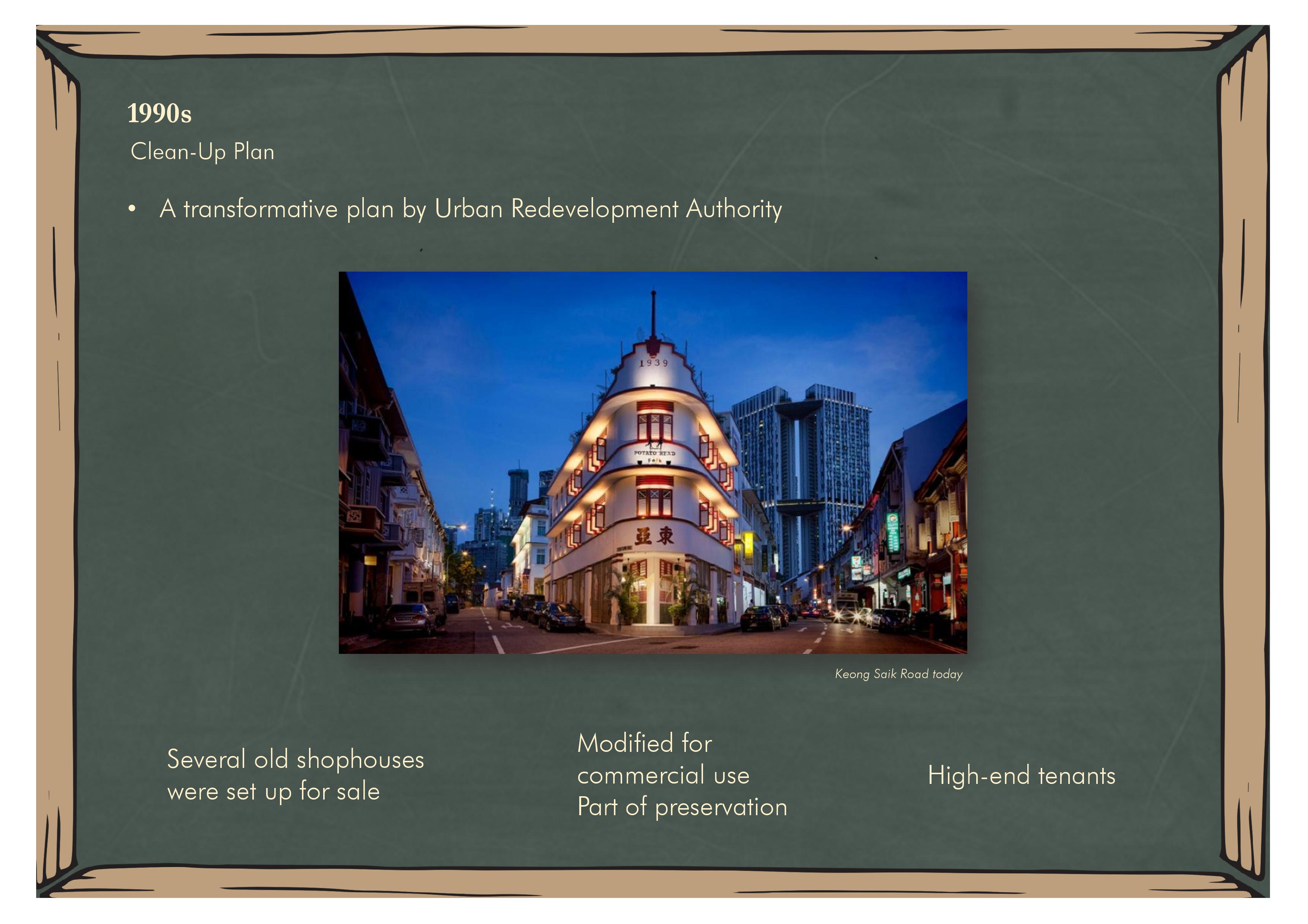 The third segment of the presentation introduces Keong Saik Road’s unique trait, the transformation of a notorious red-light district into Singapore’s poster child for a hip New Singapore. The slides first talked about its notoriety as a red-light district:

The slides for this segment were done in the style of a chalkboard. Inspired by the many chalkboards displayed outside the eateries I came across while at Keong Saik Road, I wanted to use the medium of a chalkboard display as a unique way of presenting Keong Saik Road’s unique trait. This was also because, keeping to the theme, how some restaurants announce their specials of the day or promotions. 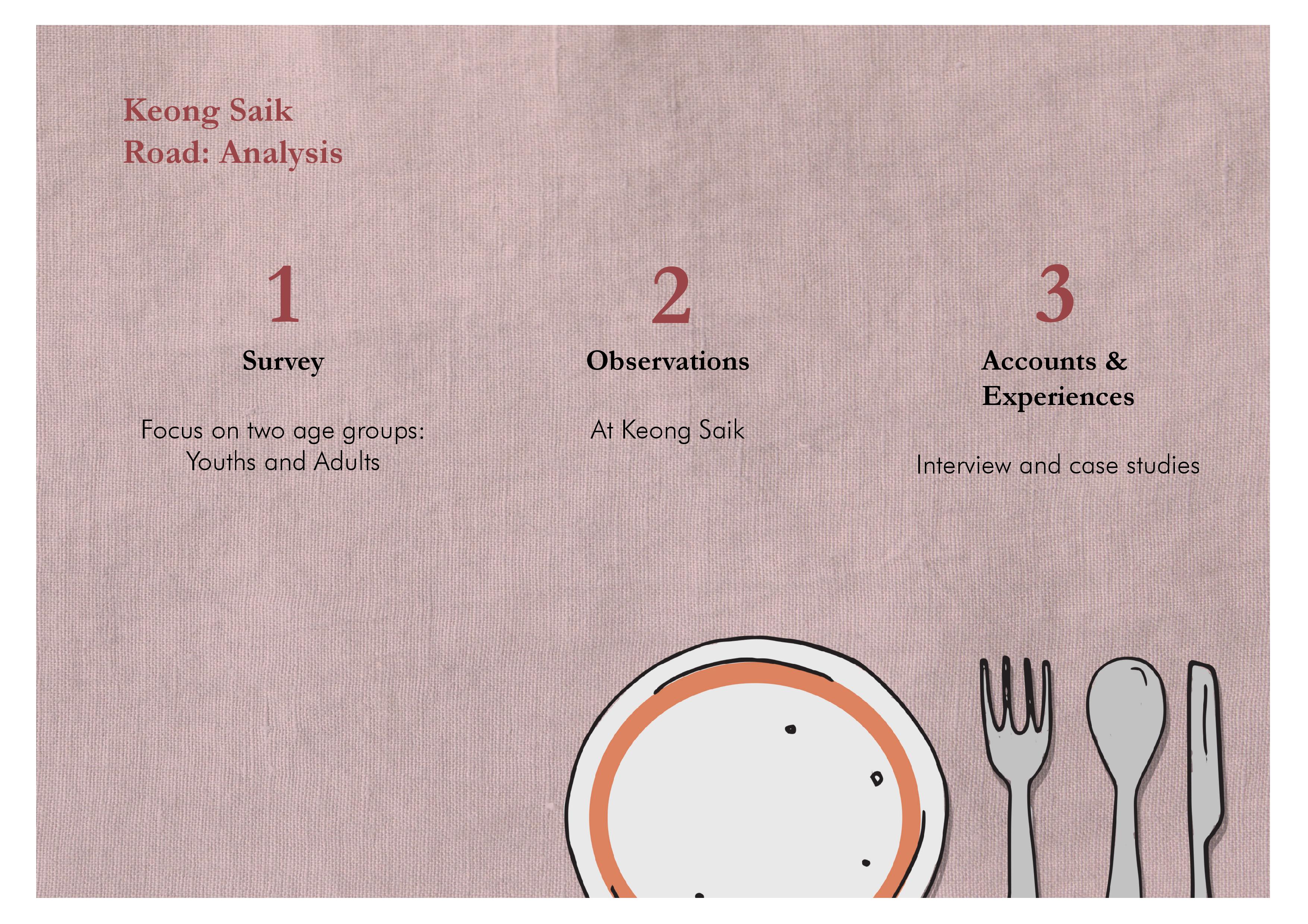 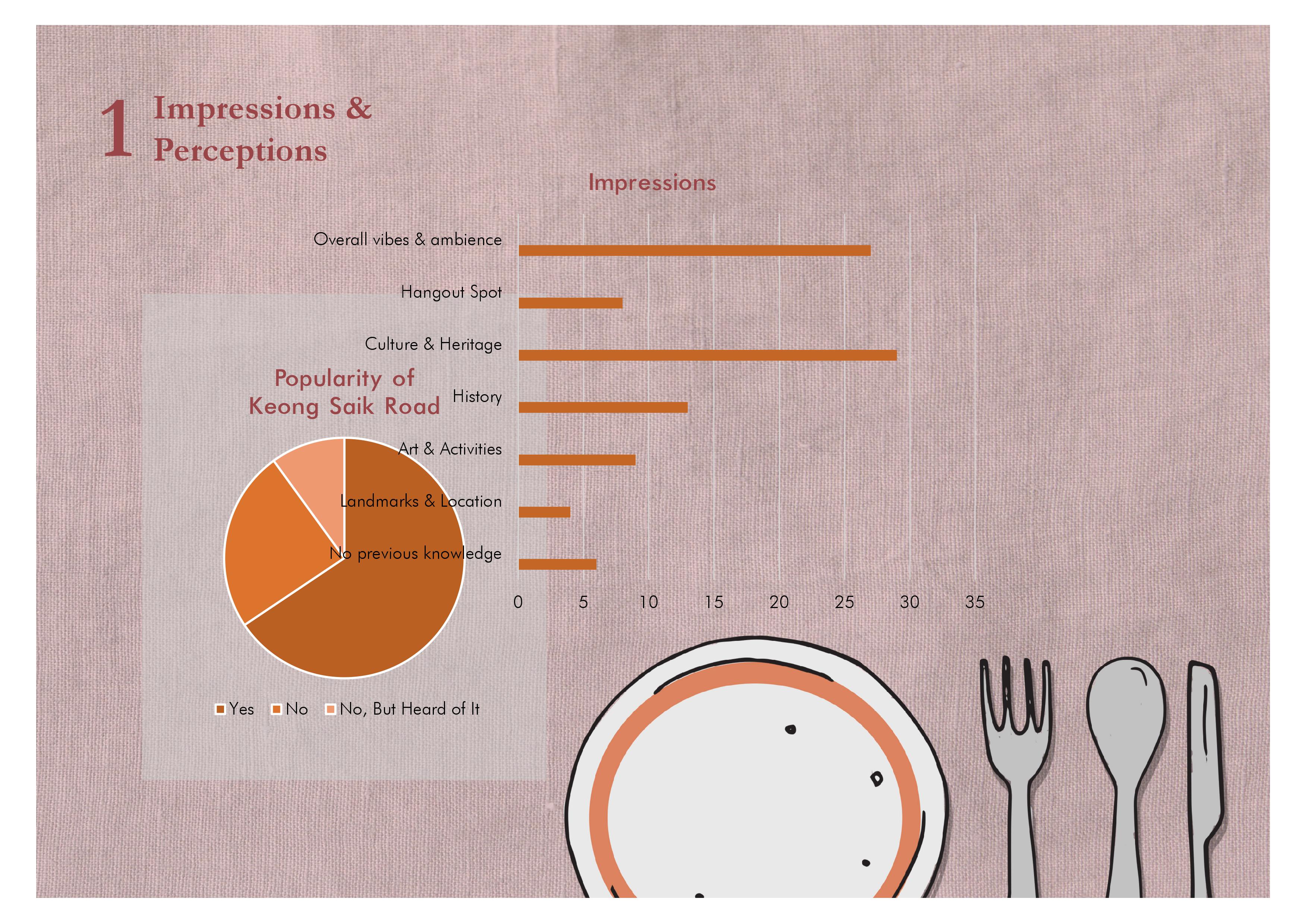 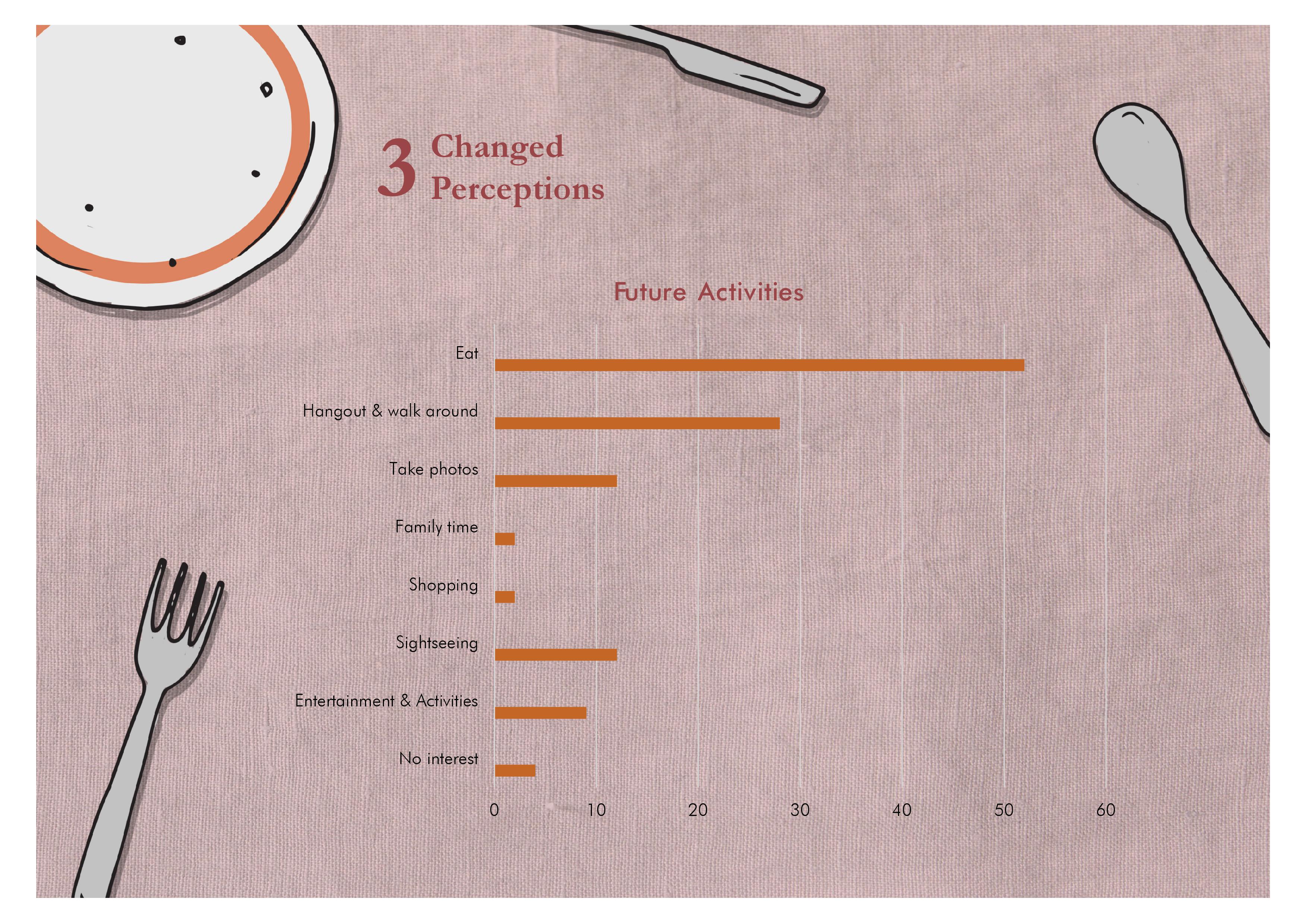 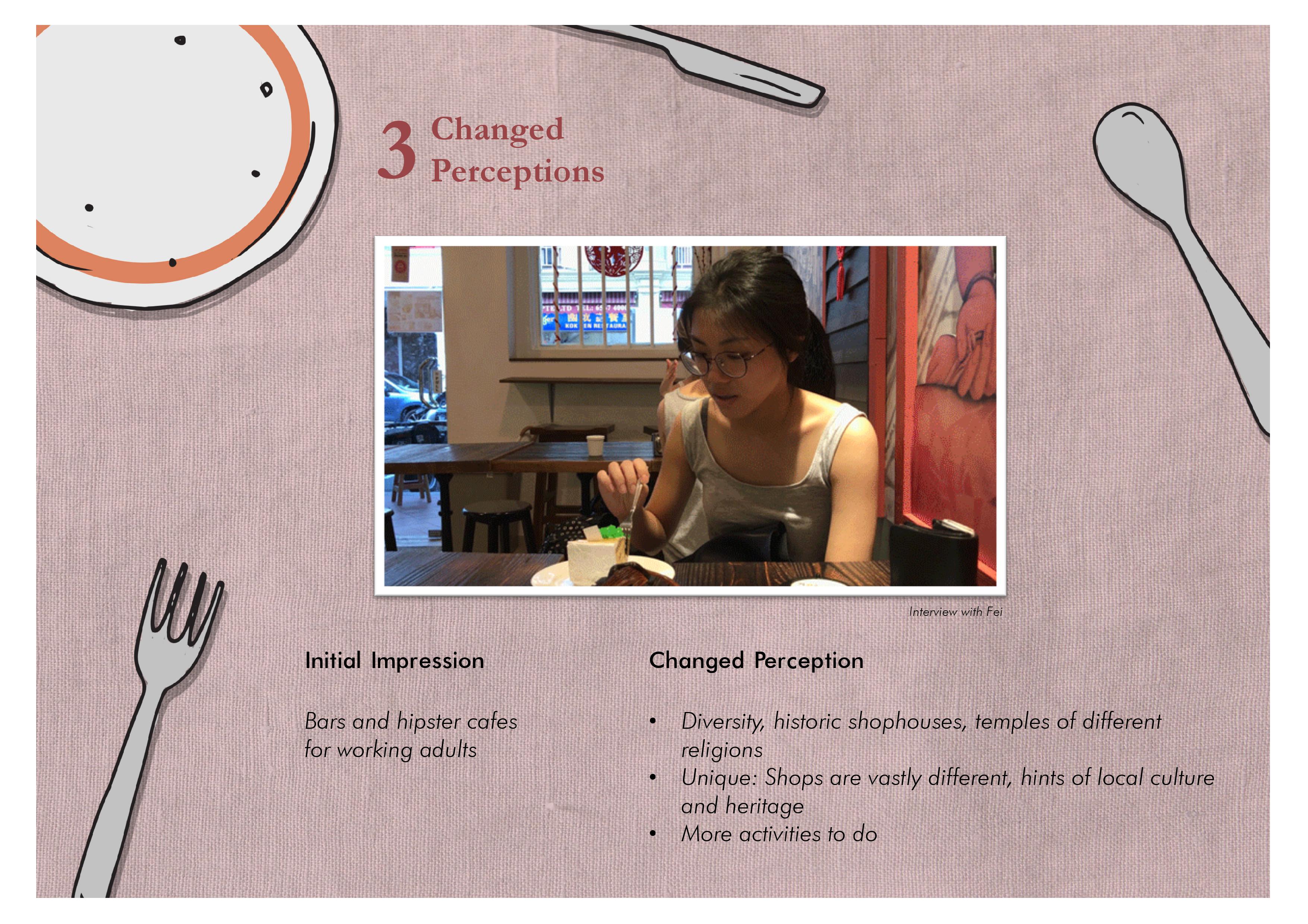 The fourth segment presents the data collected from my primary research on the area. This portion of the presentation is broken down into 4 components: The final segment of the presentation is the conclusion, emphasising Keong Saik Road’s transformation into a trendy hangout spot famous for not only its F&B scene, but for its rich cultural history.

For this portion, it was done to a setting of receiving the bill. Coming to the end of the dining experience, someone has to pay the bill!

Conceptualising for this project first started off with picking out and narrowing down unique places in Singapore.

I listed and narrowed down places I knew at the top of my head. Some of the places I was interested in exploring further were Upper Thomson Road or MacRitchie Reservoir, Seletar Air Base, Keong Saik Road, Balestier, and Bishan. Some of the traits associated with these places were:

However, after debating, I decided to go with Upper Thomson Road/MacRitchie Reservoir.

I started researching more on MacRitchie Reservoir and found out that it, along with the surrounding Upper Peirce and Lower Peirce Reservoir, is home to many wildlife, the most notorious being the macaque monkeys. It’s also where Singapore’s first free-standing suspension bridge, the Treetop Walk, is.

I visited the area and conducted short interviews with a couple of students (15-16 yrs) and a couple of adults (37 yrs, 40yrs) on how they viewed the area:

I also held a couple of email interviews with people who were familiar with the area: a couple of outdoor enthusiasts (one holds regular running expeditions at the area, and the other holding fishing trips), and a wildlife guide who holds guided trails educating members of the public on the wildlife there.

However, after looking more into the research and consulting with Joy, I realised that even though MacRitchie Reservoir does have its unique traits, it is quite difficult in expanding on the quantitative aspect of it, and the uniqueness may not be as strong enough.

So I decided to change my location to somewhere more interesting and easier to extract data from: Keong Saik Road!

Because of time restraints due to my indecisiveness, I had to work quickly. I started with planning out the types of research and methods to adopt for the area:

I first started on conducting secondary research on Keong Saik Road; using online sources such as online encyclopaedias and databases, articles, blogs and reviews, and websites, I found:

I also found that a local author, Charmaine Leung, wrote 17A Keong Saik Road, which provides personal accounts of her growing up in the area when it was a red-light district.

Primary research, on the other hand, included conducting surveys, holding interviews, and visiting the site.

The survey was done on Typeform and administered to youths and adults. I distributed the survey by getting help from my friends (thank you!) and my parents and their friends/colleagues (thank you to them too!).

For a detailed look into the survey, please refer to: https://vanessa4.typeform.com/to/R4vVOi

The statistics was consolidated and categorised into different groups then translated into charts, which were then used in the presentation.

I also conducted a short interview with a friend. I brought a friend, Fei, to Keong Saik Road and noted down her initial perceptions of the place and how it changed after taking her around and briefly explaining its history. I thought interviewing with her was suitable as she hadn’t been to the area in a very long time.

Also, when visiting Keong Saik Bakery, I had a short talk with one of the employees there and in addition to selling us some bread, she talked about how the bakery tried to retain some of the Keong Saik culture.

The bakery had a speciality bun called the ‘Sor Hei’ bun that was modelled after the notable hairstyles of Majie, traditional women who worked as domestic workers and vowed to never get married. It was done in tribute to the previous shop owner who was a Majie.

Furthermore, it was interesting to see that the bakery had a range of buns that catered to both local and high-end flavours. E.g. there was a heibi-flavoured bun, and a champagne sourdough bun with fig and cream cheese.

Additionally, I did a site recce, where I took photos of the place and conducted observational data. The data collected involved:

Taking a walk around the place, I generally noted down the visiting demographics, and found that there were a number of youths, adults, and elderly. Families and children were lacking.

For a more in-depth analysis, I sat in Keong Saik Bakery from 4pm to about 7pm and noted down the type of demographics and frequency at which they patronised the shop. I found that the bakery had a lot of youths and adults visit the shop as opposed to families with children.

When taking a walk around the area, I noted down the types of facilities, as well as the different types of eateries. There were restaurants, bars, cafes, small eateries, bakeries, convenience stores, and coffee shops.

The facilities, on the other hand, comprised of boutique hotels, spas and hair salons, and lounges and karaoke pubs.

When I was visiting the area, a local arts event was coincidentally taking place. The event was an annual event that takes place at Keong Saik Road, and they would typically block off the area for this. However, when reaching out to the organisers, they didn’t reply!

After consolidating my research, I brainstormed ways in which I could present the data in an engaging yet relevant fashion.

After going with a normal presentation, but in the style of a dining experience, I planned the visuals and content for each segment: 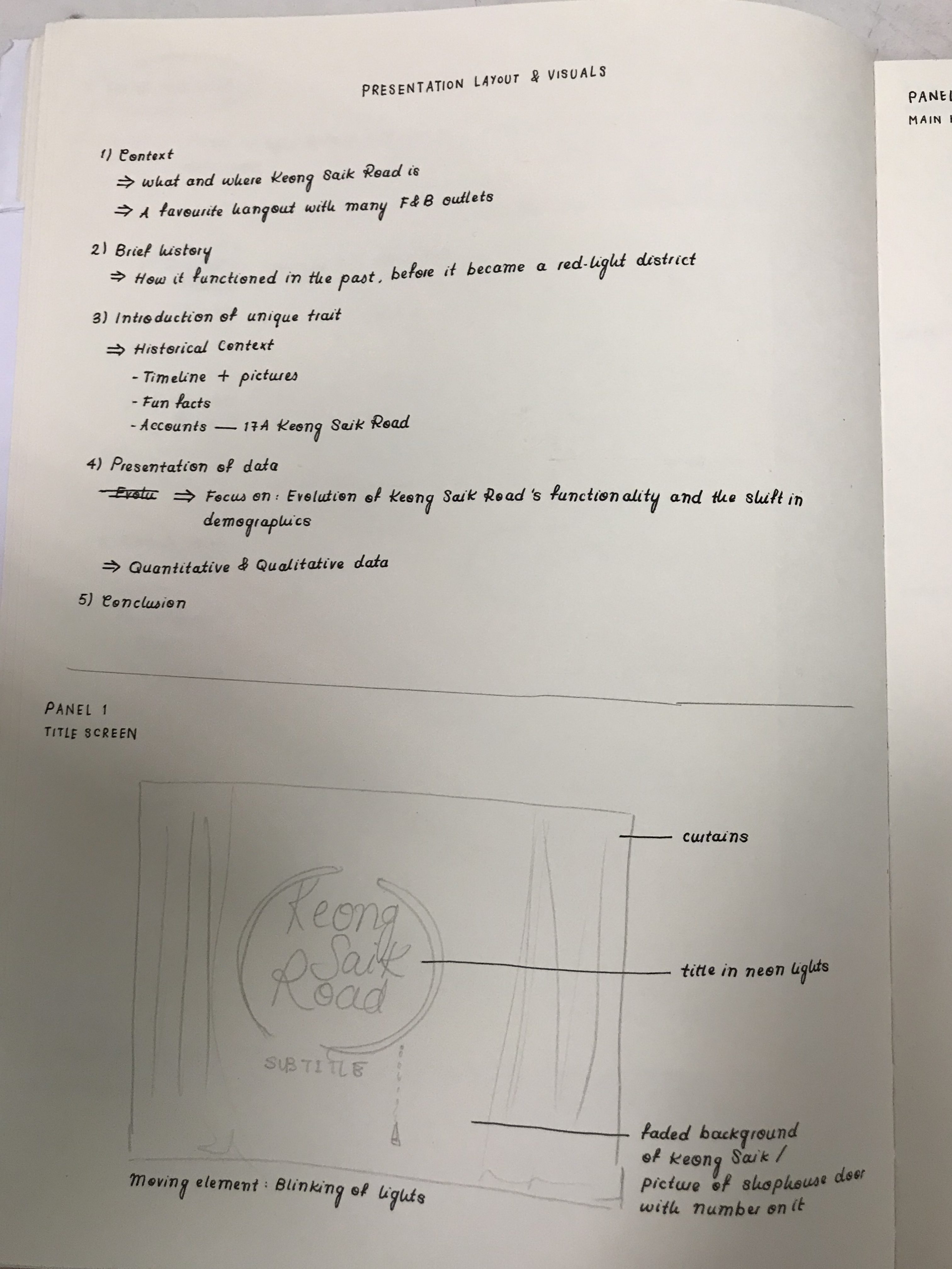 One of the main challenges I faced during this project was choosing a location. My first choice was actually MacRitchie Reservoir or the Upper Thomson area, but it was difficult in pinpointing a specific unique trait that the area had. I decided to go and conduct research about the place first and that wasted quite a substantial amount of time. Because of my indecisiveness and uncertainty in choosing the MacRitchie/Upper Thomson area, I had to change my location in the last minute! So one of the main challenges I had was the lack of time.

Some of the feedback I got about the presentation:

With the feedback, I hope to make the following improvements when starting on the zine: