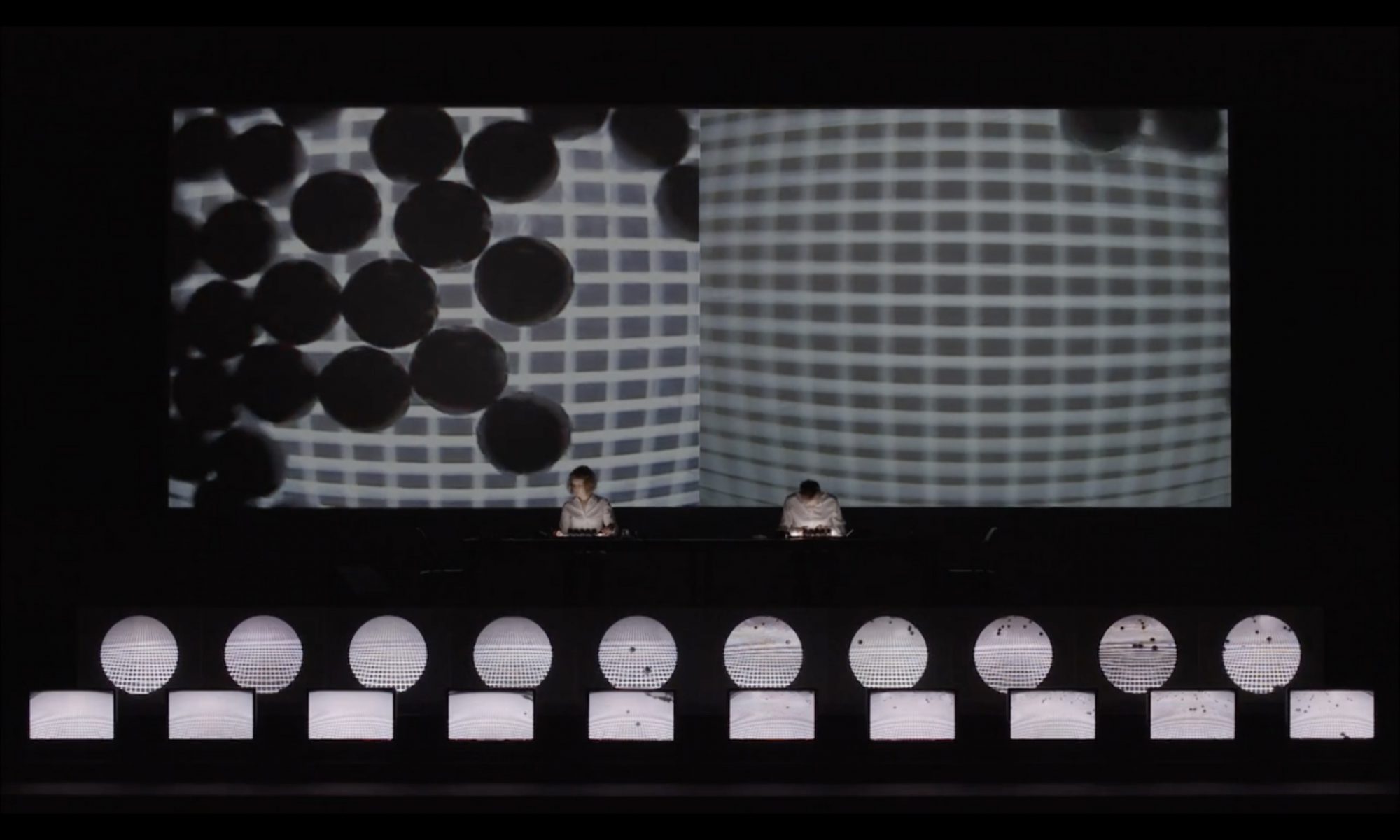 “superposition” is a synergetic 65-minute performance between human and machine, about “the way we understand the reality of nature on an atomic scale.”  1

Inspired by the “mathematical notions of quantum mechanics” 1 , patterns of data are projected onto multiple screens – 10 small digital screens at the front, 10 slightly larger ones behind them, and a large split-screen that stretched from the floor to the ceiling at the back. At any given time, two performers sit across or beside each other, symmetrically sandwiched between the largest screen and the smaller ones at the front. Their role is to orchestrate the projection of data on the screens.

In terms of physics, “superposition” is the sum of responses caused by two or more stimuli in all linear systems. 3 So it is with this performance that all the components on stage – audio, visual, physical phenomena, numerical concepts, human behaviour and randomness – will be in a state of superposition as they are being “constantly orchestrated and de-orchestrated simultaneously in a single performance piece“. 1

The performers communicated with each other by typing Morse code and performed various random actions that triggered visual responses on the screen. 6

They rolled marbles across a flat surface, allowing them to randomly tele-drift across the large split screen.

Then, in the next sequence, a computer program plotted their positions in relation to a central axis, creating a piece of art out of the plotted lines. The screens displayed all these interactions in real-time. 6

Ryoji Ikeda seems to be interested in using cold data as language and how he can make it talk or sing, like in John Cage’s Variations V where the performers’ dance movements trigger a response to the music produced by the machine. 6

Art critic Ben Ratliff says this of him: “He’s a kind of translator, converting principles into words, numbers into code, code into sound and image.” which describes the concept of a feedback loop, a two-way communication between human and machine. 6

In an interview, Ikeda explains the approach he takes in executing his work – embracing entropy to arrive at the final outcome. But it is not just entropy, but controlled entropy, so that there is still some intent, form and structure to his performance, so that there will be order in chaos. 5

Abstract from the interview:

“And after John Cage and after that generation, you know, and the generation of computer and programming, my direction is super-precise, it is the direction on control. I try to control randomness. This is a big counterpoint, the encounter of randomness and control. The contrast is more interesting. If you really control a millisecond, there are other possibilities, even if they are microscopic. You can’t perceive the change directly, but if you pay very close attention, the entire composition changes. So, I try to add randomness, and I like to see the counterpoint, the counterbalance.” 5

Physical – The use of extreme sound frequencies and fast-flashing images on screen can be quite physically challenging to take in. There is a possibility of getting a seizure or going deaf from the performance. According to Ikeda, his works are “as much a test for the electronic devices as it is for the audience’s senses.” 2

Emotional – The formidable size and scale of the screen put us in an awe-inspiring perspective of how small we are in the order of the universe. The rhythm, pace and sequence of visuals displayed, accompanied by the irregular beats of digital sound further immerses the audience into the performance.

Conceptual – The ambiguity of text and abstract imagery mapped out throughout the sequences give the audience space for open interpretation of the work.