” Why did you choose to do 8-bit?
Because I like torturing myself. “ 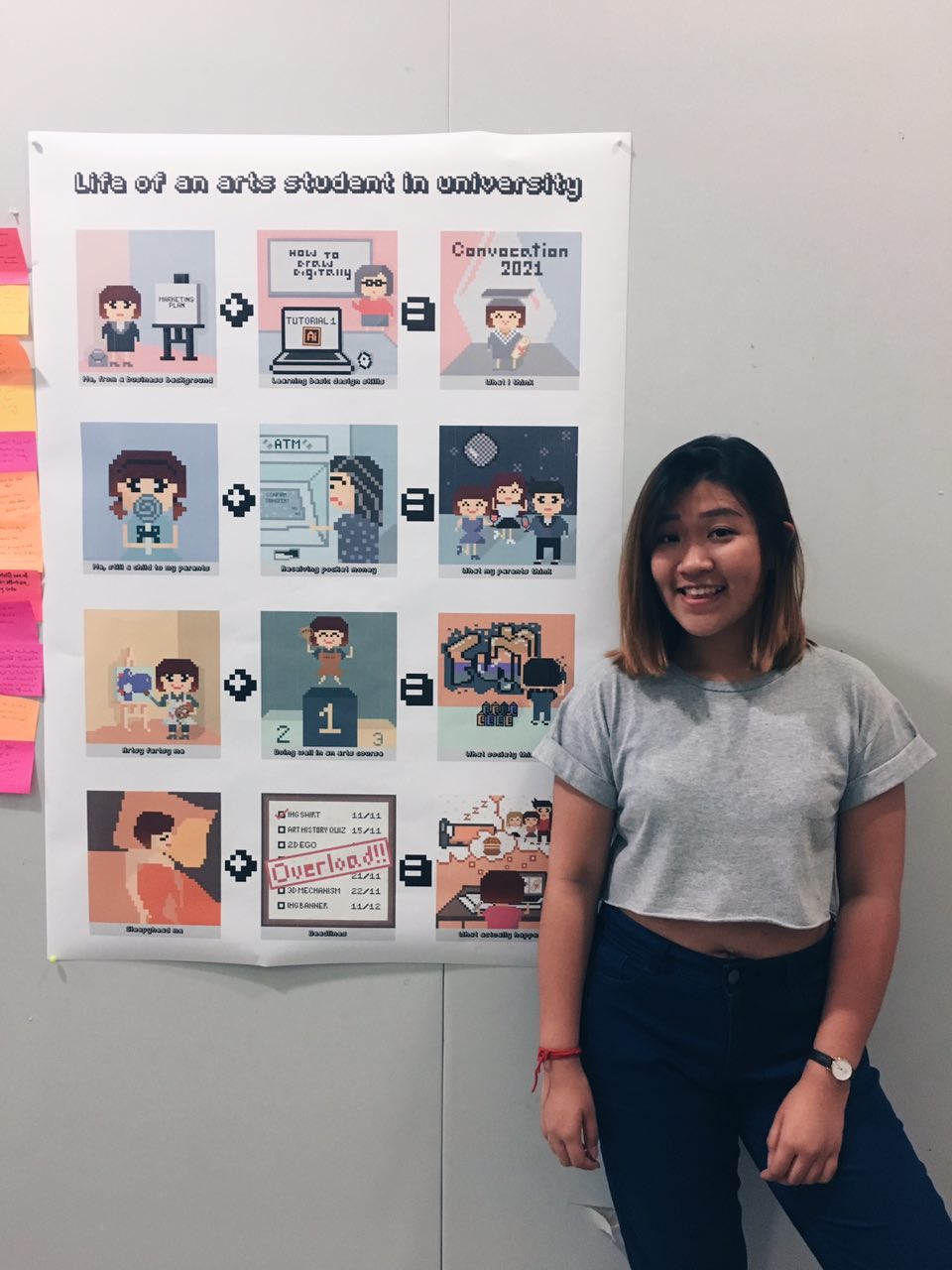 Finally, I’m done with Foundation 2D and the final project – EGO!
The journey was tough, but the final product was better than expected!
From the day I decided to to 8-bit, I knew it was the day I am doomed.

Informing my classmates about my choice of art style was hilarious.
They were all saying that I’m crazy for deciding to choose an art style is of a certain level of difficulty, what more I have never tried it before!
Even when consulting Prof Mimi, she told me that no one has ever done Project Ego in 8-bit art style before!
And that scares me…. If i screw it up, I am screwed.
But, I decided to go with my gut feeling, took a leap of faith and went ahead doing!

It was really tough doing 8-bit, as I had to colour in pixel by pixel, which meant – if I changed my design, it means I have to restart again, which happened.

I couldn’t decide on the layout and elements to put in, and I kept changing it, resulting in tons of time taken away, and I took a really long time finishing it.

But, seeing the final work, No regrets!

This project, is by far my favourite to work on for Foundation 2D!
I got to experiment freely, and play with colours, to bring out certain mood that I am going for or emotions that I want to evote – which is pretty cool.

Compared to the previous assignments, there was less restrictions in this, and it was really stunning to see the whole class’ work being hung out – each and everyone of us had such different and unique styles!! 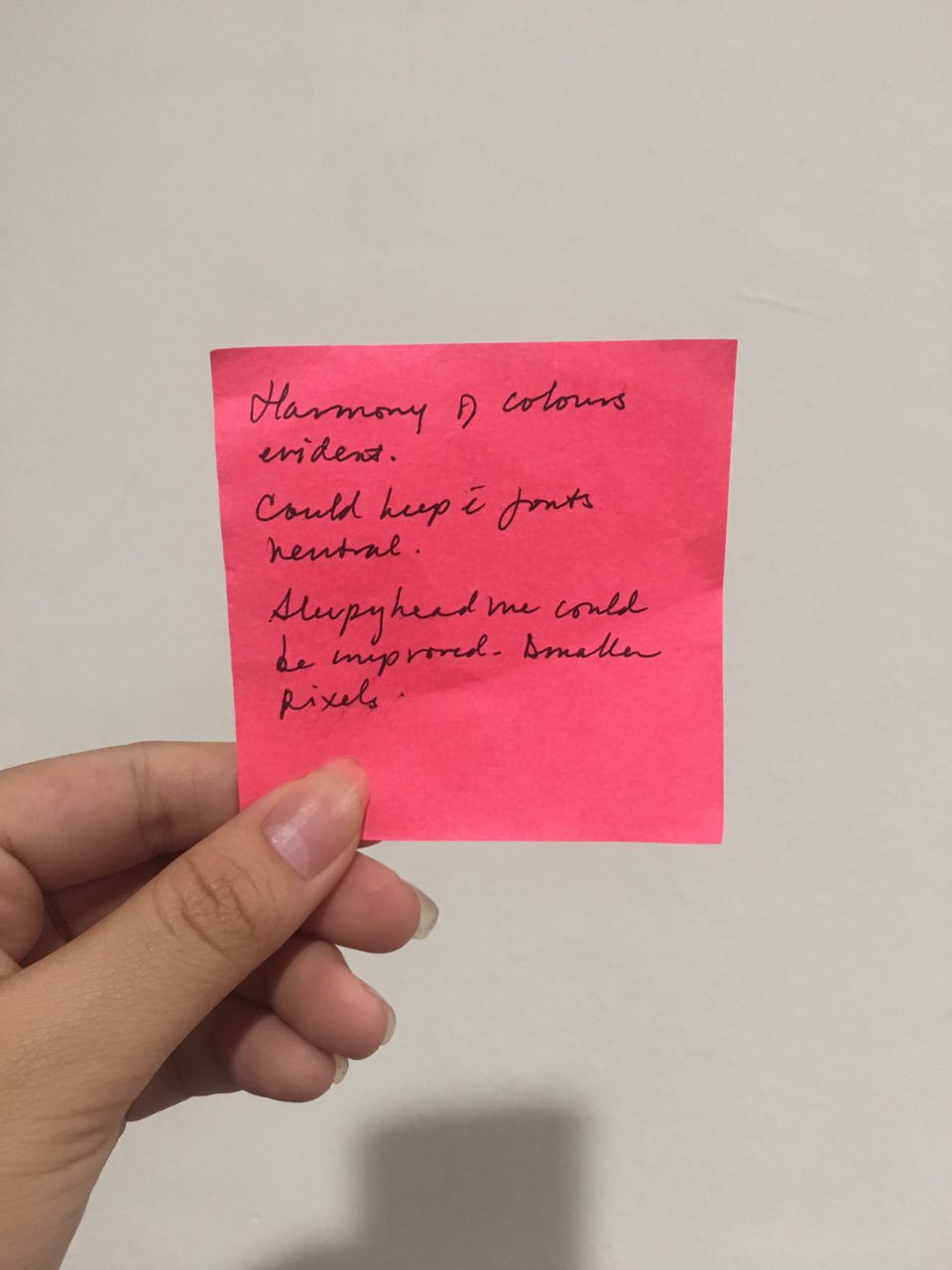 “Harmony of Colours evident
Could keep the fonts neutral.
Sleepyhead me could be improved. Smaller pixels.”
These were comments by Prof Mimi pre-critique!

I do agree that sleepyhead me could have been further improved, by maybe adding more elements in too! Right now, it seemed too plain, just with me sleeping (it’s not like i’m sleeping beauty right HAHA)

After sharing my project, Prof shared that maybe for the square of “Deadlines”, it would have been better if I didn’t cover the whole square just with the board of deadlines – which I have to agree with! Maybe adding a pair of hands, or other stationery/elements would’ve made it better!

Also, the fonts for the text could’ve been more neutral as it seemed too much with all the 8-bits everywhere!

The third row colours did not seem to complement very well either – & I agree. It didn’t look like what I perceived it to be! On my laptop the blue-green colour had more blue tinge, but it wasn’t really shown on the print-out! (Or maybe my spoilt laptop screen was showing me things :()

Prof Mimi also said that it was a steep road I took, from the consultation designs that I showed her, till presentation day, due to the drastic changes hahaha. But i’m glad, it all turned out well! 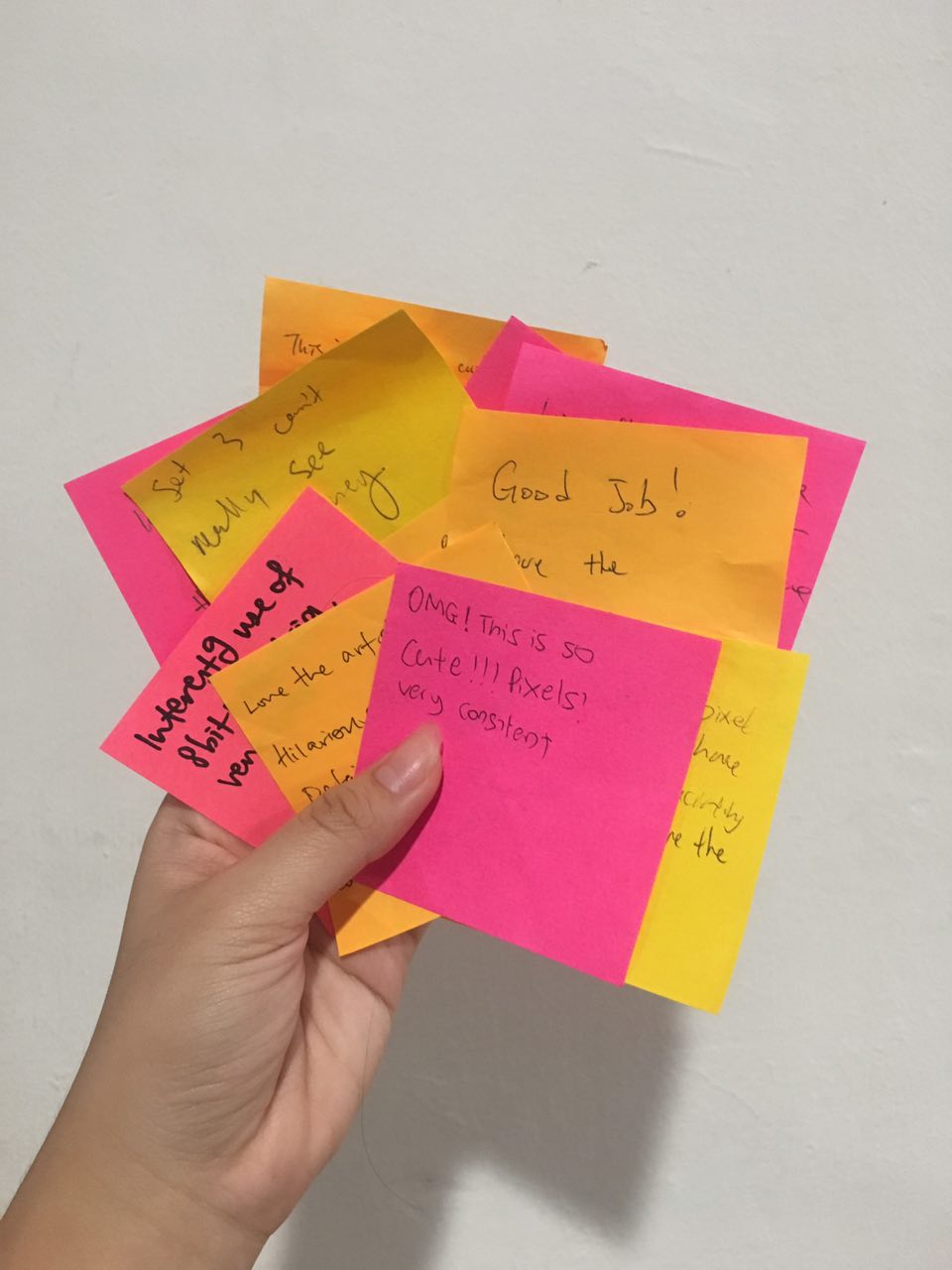 Many reviews that I’ve gotten from my classmates are really positive!
Most of the comments are they liking the 8-bit pixel art style that I went for, and the neutral/pastel colour scheme I used!
Thanks friends for liking my 8-bit work!

A way I know that I can work on, is my pixel art!!
As a first-timer, I’ll say that it isn’t that bad, but overall, it looks below average.
Instead of using the same size pixels, I kept switching around, resulting in a square having different sizes of pixels – which is something I should work on!

Next, it was something I realised too late.
While I was finishing up my last square, my friend taught me an easier way of doing 8-bit. But it was too late, as I had most of it done already!

If time allowed, I would’ve re-done everything in that same style, it would’ve saved tons of time and looked less messy!

Also, for colour-wise, I feel that I should’ve done more research into it, especially on the usage of complementary colours. Complementary colours are a real tough play, as one step of going wrong might result in the whole row looking weird and inconsistent – which is what happened to my Equation 3!

All in all, thank you Foundation 2D, for bringing me on an exploration journey where I got to experiment and know more about my art style and drill my creativity and artistic talent!