(OOC: Giowels are the longest because they are the most confusing race setting I think X”D. Anything unclear about any race or setting we can explore together! ^w^)

Giowels:
Magic are cast with their essence.
Their total essence depends on their age, where

And the elements of the essence already gained will not change.

As they are born from the essence of the elements, should their essence run out under any circumstances, they will dissipate and die. Lost essence usually recover 1 in half an hour naturally.

Giowels with multiple elements will have their essence will be distributed across the elements, meaning they have a greater variety of skills but each at a lower capability.

The distributions of the essence depends on their affinity with each element (Do they have a main element?) and their surrounding.

E.g. a Giowel with some form of water element would more likely be gaining water essence each year they are near the sea/water..

For Beam, 13 Essence in total, 4 essence in Fire, and 9 in Air. The fire is weaker right now because they are surrounded by the sea.
(OOC: Or that’s what I’m thinking, but if you’ll strongly prefer it another way, with some backstory to back it up, it can be considered~ More than enforcing the settings I want you to enjoy acting as Beam! X3)

Also, since Giowels are like “Force of nature”, their emotions are more… “artificially gained” over the years. A Giowel with no contact with other people might not have emotions at all, while the emotions of young Giowels tend to either very limited (lack of understanding to what emotions are), or very pure and strong.

Tierans:
Not all of them are filled with love towards the world. Some use their affinity with the animals and plants to sinister ends, creating unique poisons and bringing unsuspecting animals to cruel and untimely demises.

They usually also have the weakness and some negative traits of the animal whose attributes they share.

Humans:
Cunning and selfish, and they have used their resourcefulness to their biggest advantage and developed swiftly. However, most believes that the process of their development is what brought war upon the Old Continent.

Hurans:
Both Tieranes and Humans believe that Hurans’ birth are impure and unnatural, created from sinful unions that contaminates the earth and angered the Gods. Unsurprisingly, they usually live as outcasts. 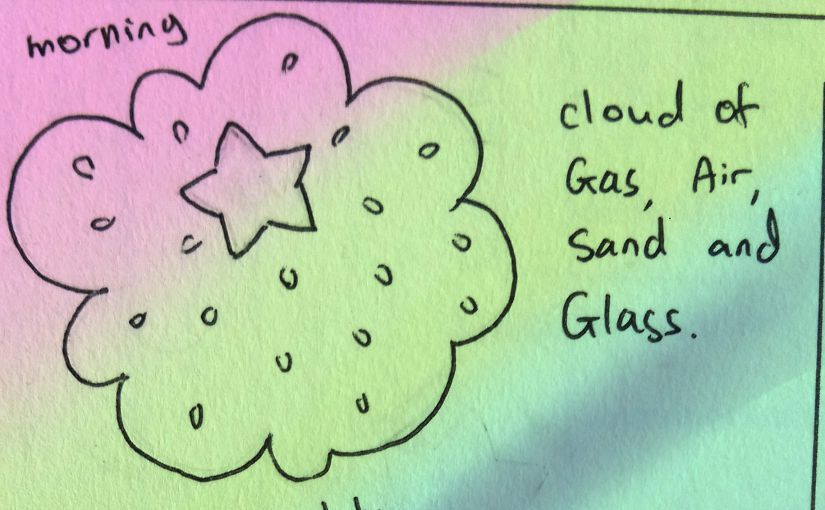 The ship is huge, with 2000 people there about. But after 15 years, there are few faces one won’t recognize.

The older ones often spoke of the beautiful but war-torn land they left behind, and the young ones listened intently as though it was a mere fairy-tale.

15 years is long enough for anyone to think of the land as a distant dream. Some has even begun to think that they are sailing towards the end of the world, and their ashes will forever be spread between the pink-green skies and the turquoise seas.

This was especially so on the day the sea dipped vertically beneath them.

And at the edge of the world, they saw a city.

(Revealed) Races:
Each race will come with 2 additional stats on top of the 8 you are to allocate.

There are hidden race(s?). But. they will only appear depending on how the story progress. You might never run into them.

Even the revealed races have undisclosed weaknesses I will explain in subsequent Lore, after you create your character. (I want to play a bit on the luck and chances of birth. Humor me and good luck.)

Giowel (Pronounce Geo-well):
Arising from the essence of the elements, their small stature belies their exceptional affinity with magic.

Magic are mainly based on the elements they are born from, namely earth, water, fire or air.

Giowels can have more than 1 element. Their skills with their elements depends on age as well as their surroundings.

(They can look anything like a fairy or elf or dwarf they are just. short.)

Tieran:
Legends has it that their ancestors were animals blessed with sentience and intelligence after their pure emotions and love towards the world touched the Gods.

They are very good with animals, plants and living things in general, and can have a familiar animal.

Decide what kind of animal attributes they have.

Humans:
Their intelligence and adaptability are their greatest assets. Skilled crafters and traders, they are the bridge between the races, and they benefit immensely from the connections.

They create unique weapons with the help of both the Giowels and the Tierans, and they used their own alchemy to bind themselves to individual weapons or tools, giving them special attacks with said items.

Weapons can be semi-magical or even with technology. Decide what they are and how they are acquired.

+1 on any 2 stats (please indicate in character creation. No dublicate of stats (any stats +2 NO.))

Class/Skills:
None. You may choose two or three things your characters have done for a living or are particularly skilled at. But it must make sense so this falls into the backstory of the character. You can choose to reveal them now, or as the story progress.

But it must make sense. E.g. Unlikely for any character to be an assassin when they have been stuck on a ship for 15 years of their life.
They can learn more skills as the story progress~

Inventory:
No limit. But again, must make sense.

You can’t carry more than 2 or 3 items in your hands/pocket.
If you have a bag how big is the bag (will it be inconvenient?)?

At the moment, a bag with a magical amount of space is not possible.

Decide on the race,age (Cap at 40) and inventory, and perhaps backstory (skills? pass time on the ship which is like a mini..town?) or looks (Not completely necessary we can discover the key elements later or through a drawing if you want OvO). The actual story begins in the Chapter I will post after.