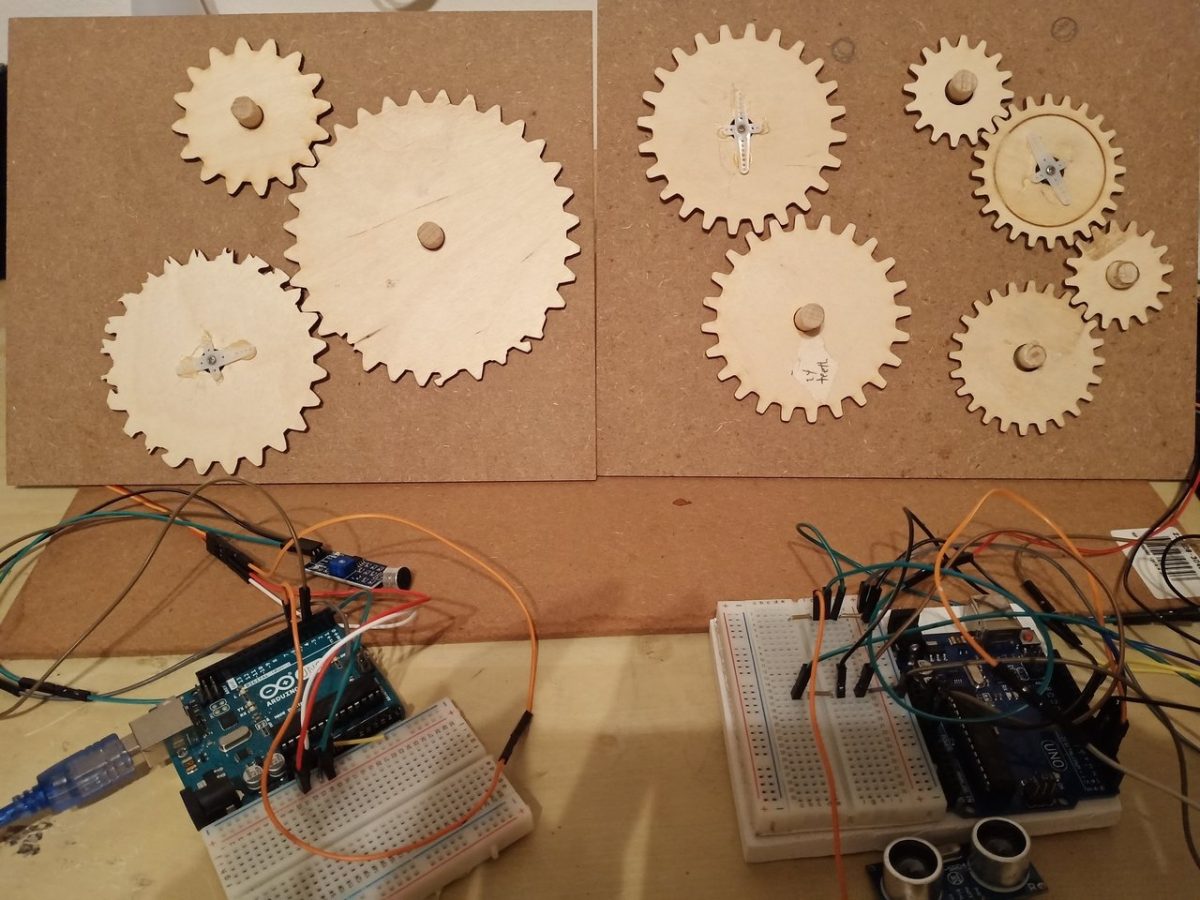 building up on appearance of old gears

I have tested out my prototypes for gears, using old ones from last semester, where lasercut them for my Interactive Spaces final project. The gears worked well and some parts did not work out – for example the deliberate alteration/ removal of gear teeth in some gears. These teeth did not bite well when in contact with another gear, causing a disruption in motion.

The purpose of spoiling the teeth was to represent gears as unique on their own, seperate from other families of gears in terms of appearance. This makes them distinctive not only in terms of how they react to stimuli such as distance, motion but also visually as well. Each family has distinctive identities that makes them different from one another, in terms of size, the type of teeth and reactionary behavior but overall, the round circular shapes makes them easy to look at as a viewer.

One better solution to alter the traditional appearance without compromising on its main function, is to edit them in a way where when two gears are in contact, their shapes complement each other. Their shapes can be altered from traditional teeth, but they need to mesh well together. However, this would be a safer option to altered teeth in same way throughout each set of gears. Because too many alterations, may make things more difficult to put them together ( unless I plan out carefully the position of gears when attached to servo heads ).

The latter is possible, as long as I mark out the exact positions of the gears’ movement. This would allow the gears to appear to work even when it appears the tooth are crooked. 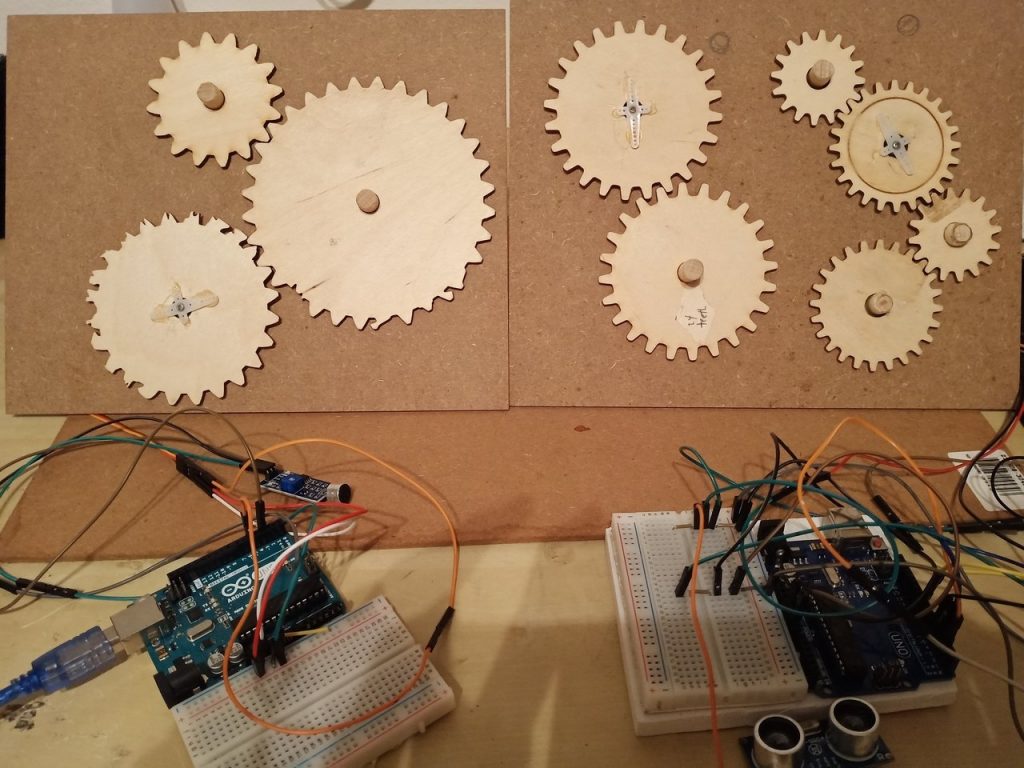 I may change my mind, but I think I would be interested to look into gears. As family of gears, they seem to represent behaviors and emotional states – in reaction to a stimuli. The use of rack & pinion, the long object that acts as a bridge between one gear to another, or one gear to cause one other gear to move, haven’t been explored yet. This is because the old laser cut rack & pinion don’t fit well with the different teethed gears I was using, unfortunately.

The lasercutting machines aren’t available at the moment due to the soft lockdown of our school (Covid-19 pandemic). Therefore, I am just making full use of the leftover lasercut wood (which weren’t all that great either) and experimenting with them and how their movement would inspire more ideas on what I could do for final year project.

As advised, I started small first. Instead of trying hard to represent something as abstract as relationships, and their complexity through use of gears, I worked out how a group of gears would work. Three was a charm so I wanted to see how each set would bring out different reactions when all 3 are placed side by side (3,6,9).

I let them gears move for a number of times whilst I do other types of work in the room, hoping I can see from afar what trait or attribute I would assign each gears with over time. Also, I explored through use of randNumber to add some unpredictable element to the routine motion of gears.

Is the gear calm and collected? If its making a lot of sharp noises, does this make it someone who likes attention ( the same way its noise grabs my attention )?

Assigning from left to right – gear 3,6,9 for easy coding purposes, I made several alterations to play around with positions and delay – these actually determined overall identity of the gear.

adding nuances to to emotional states of gears

I haven’t reached to this stage just yet, because the coding parts were beginning to confuse me.

In terms of interaction, I would refrain from using ultrasonic sensor as recommended by some people because it is not strong enough to detect movement. It was suggestible to use Kinect Sensor instead.

I’m looking towards constructing gears as main subject for final year project, which means plywood would be the material that would be heavily used. A wall size full of gears is ideally the scale I would want to represent the gears. The interactivity element – which means how people are going to play an active/passive role in my installation is determined by how my concepts are applied into practice. Haven’t really confirmed yet on what to do – some suggested a more active approach where people are given gears to hold and put against a hook in a wall to make it as if they are a part of this.

Some suggested a game. I didn’t like games, but the idea of holding a gear that enables the person to control the outcome of the  gears.. . maybe that is something to think about.

The above is a demonstration of a potential game-ified play with gears could be allowing participants to put the gears around and figure out where each one belongs.

The above is refined demonstration of roughly how each set of gears work. Each set  follow a different rate of movement, with some jerks in one or two of them. The “delay” and “pos” (position) functions works together to form a certain attribute to describe a family of gears, like how you would describe a temperament of the person. As mentioned before, there are 3 “families” of them each one distinctively different from the other. It took me a relatively quite a bit of time to play around with these functions in Arduino, and letting them “display” their attributes. I draw conclusions about attribute each of them would have, by controlling functions, including adding “randNumber” to generate random numbers that affect outcome. And yes, it would be more fitting for a set of gears described to be unpredictable (like one further left and further right).

The ultrasonic sensors are attached, but I removed them out of the picture because they may not be used as potential materials for my final year project. Kinect would be used instead.

There’s a lot more experimentation to go. The trio of gears are just a sample of a bigger, more larger scale project that is going to take quite a long time for me to complete it!