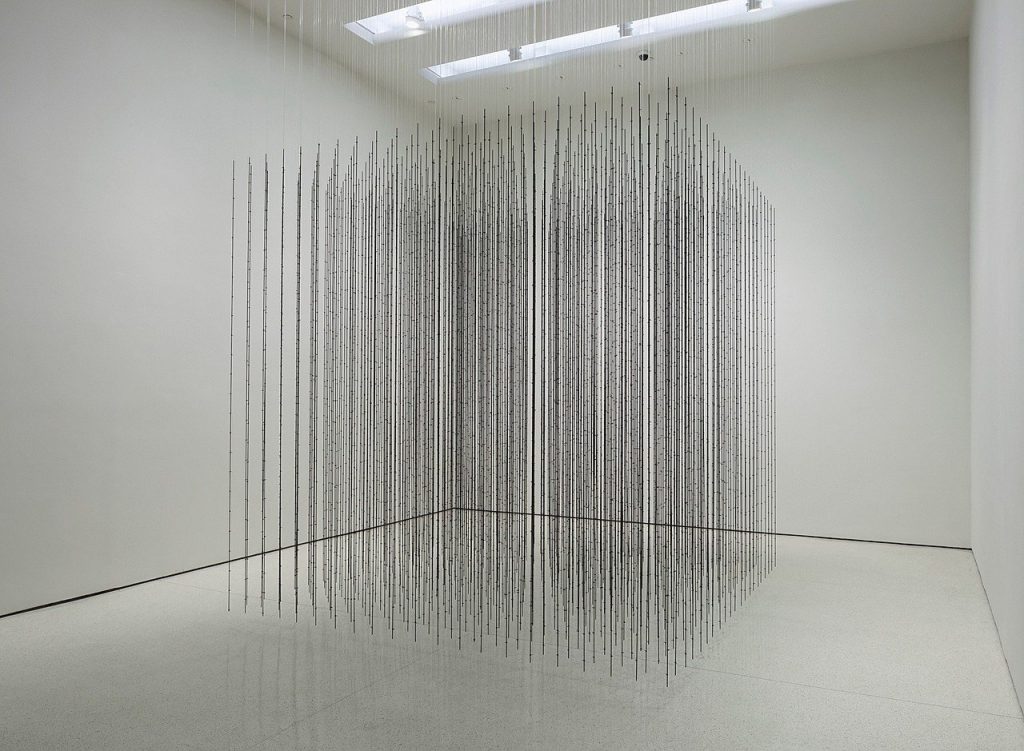 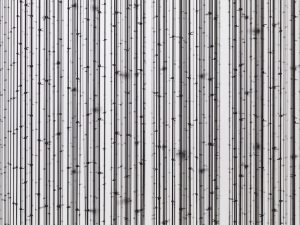 During my visit to Minimalism Museum, one artwork that I found interesting was Mona Hatoum’s “Impenetrable”. Based on the artist description, this work was meant to be an alternative version of another work by Jesus Soto called Penetrable (1967-97).  Her colourful works are inviting for people and they get to interact fully with the installation.

Based on the title itself, we can already assume Mona’s take on her work is a different one – one that’s represented by something more sinister and less “playful”. The medium used appears to be “black-finished steel and fishing wire”, and from afar it does give off the look of a cube floating in the air. The installation may appear inviting from afar, but once you come closer to it, the black wired ‘knots’ look are sharp edges. During my visit there, the visitors didn’t seem too eager to enter the “cube” or play around with the barbed- wires, which is so different from the installations we see by Jesus Soto below. 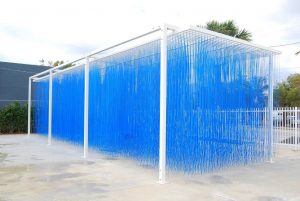 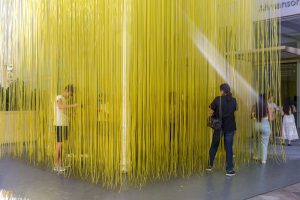 Aim: Inspire viewers with unexpected transformations , as well as the aesthetics of the complex machine in motion

This piece of work was created by Prof Hiroshii who is conceptual designer from Japan. The purpose behind making this is to add movement or motion into a still object like furniture which is normally still. By adding motion, it can help to bring out the dynamic parts of putting technology into something that could possibly be used to play around or good to use.

The work is comprised of three dynamic shape displays that move more than one thousand pins up and down in realtime to transform the tabletop into a dynamic tangible display. The kinetic energy of the viewers, captured by a sensor, drives the wave motion represented by the dynamic pins.

The motion design is inspired by the dynamic interactions among wind, water and sand in nature, Escher’s representations of perpetual motion, and the attributes of sand castles built at the seashore. TRANSFORM tells the story of the conflict between nature and machine, and its reconciliation, through the ever-changing tabletop landscape.

What I liked about this is the wave motion that is created simply by moving an object or a hand around it. There is a use of video display (Wacom) to capture your hand motion, and the use of  Kinect which helps to capture the aerial view of object/hand. This would help to trigger the pins to move according to what is being captured.

From what Hiroshii says, he was trying to put “data + energy” together , with the analogy of building sandcastles by hand. By using electrical materials such as pins, motion sensors and motors and using computer, this makes his work all the more impressive. 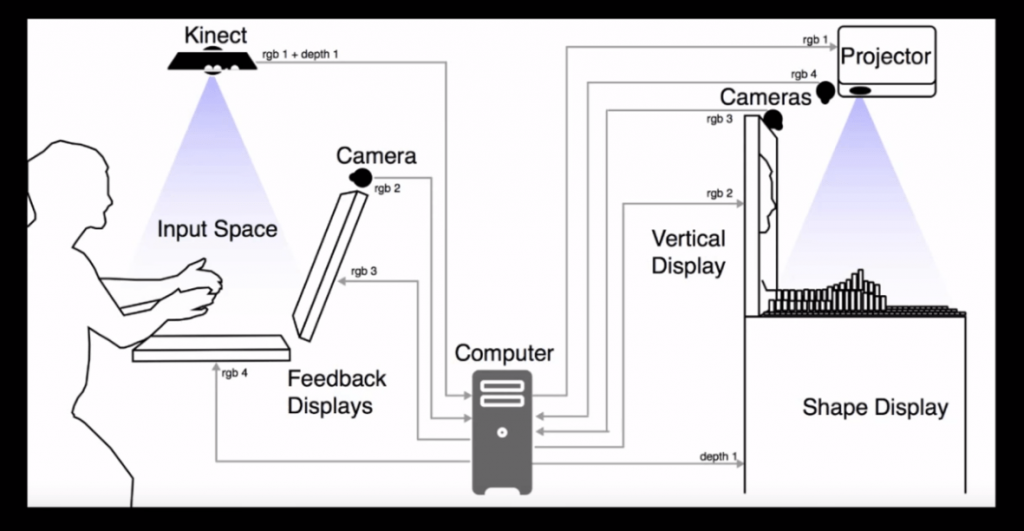 Teleoperation – capturing and rendering the shapes of our hands, so that they can be detected and manipulated.

In summary, this piece of work is complex because there is a lot of computerization involved in here, that must have made the outcome appear really smooth and well constructed. It also appears to be a very functional piece that can make our lives more easier depending on the context of our environment that we live in. I thought the most interesting part was how Hiroshii’s concept of building TRANSFORM was inspired by natural elements such as sand, wind and waves.

Also, he also mentioned the conflicting values between being human and our rampant usage of man-made technology. For some thing so technologically advanced, the thought of deferring his concepts to natural elements like sand, water and wind despite living in a digital age is something that was thought provoking to me. As we put it into context, everything around us, like living in a city state, makes it easy to over natural elements because we are not surrounded by it. So, Hiroshii’s ideas that came into TRANSFORM was quite interesting indeed..