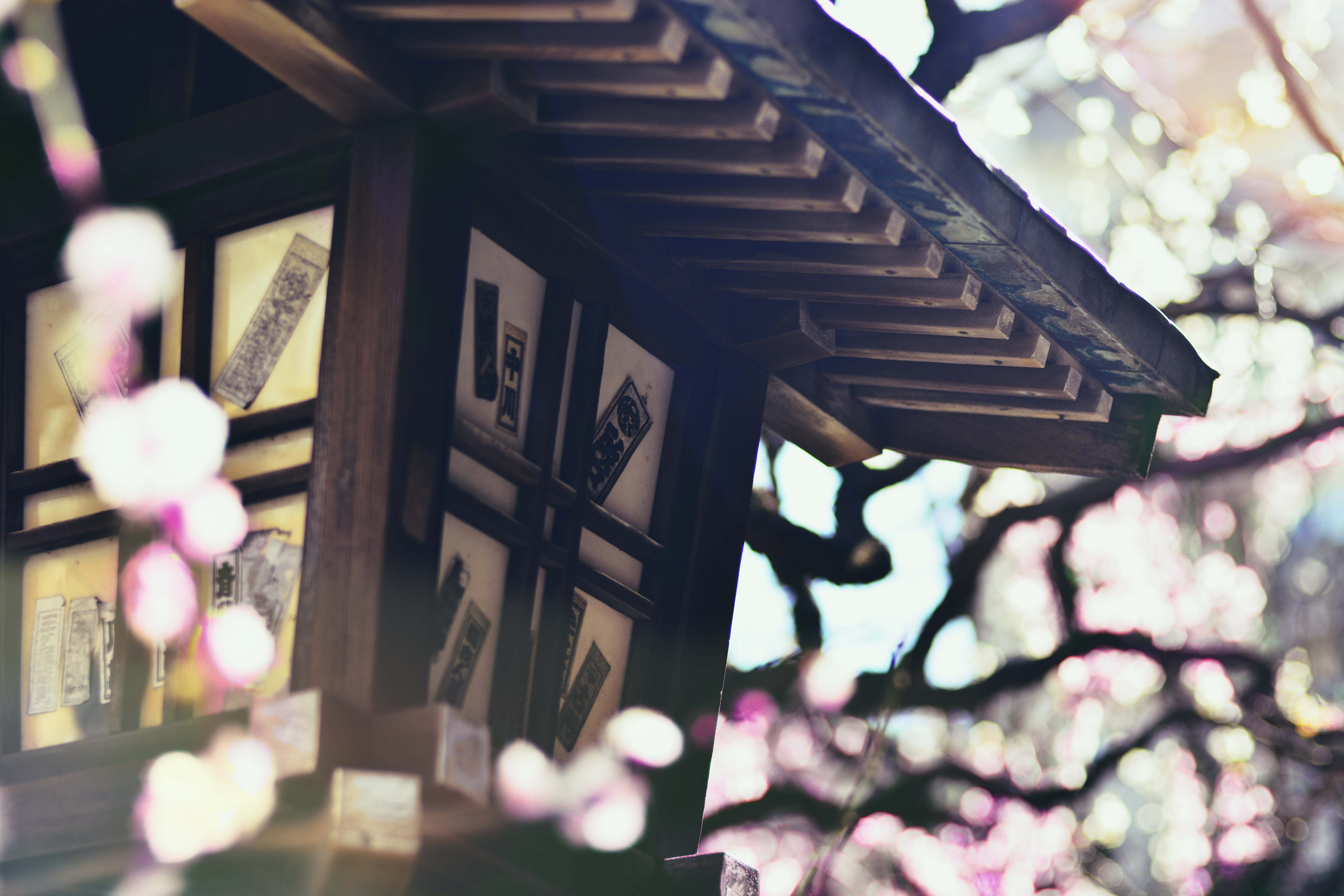 I was intrigued when Cheryl presented the next assignment which we would be working on, which was Ikebana.

Ikebana is japanese for floral arrangements. It is an exquisite form of art and requires maticulous handiwork. In addition to this theme, we were tasked to try and incoporate food into our composition to increase the complexity of our compositions.

This addition is exciting as it adds another dimension to our model as the element of taste and smell is introduced.

She showed us a variety of different styles of floral layouts and this particular one below caught my eye. 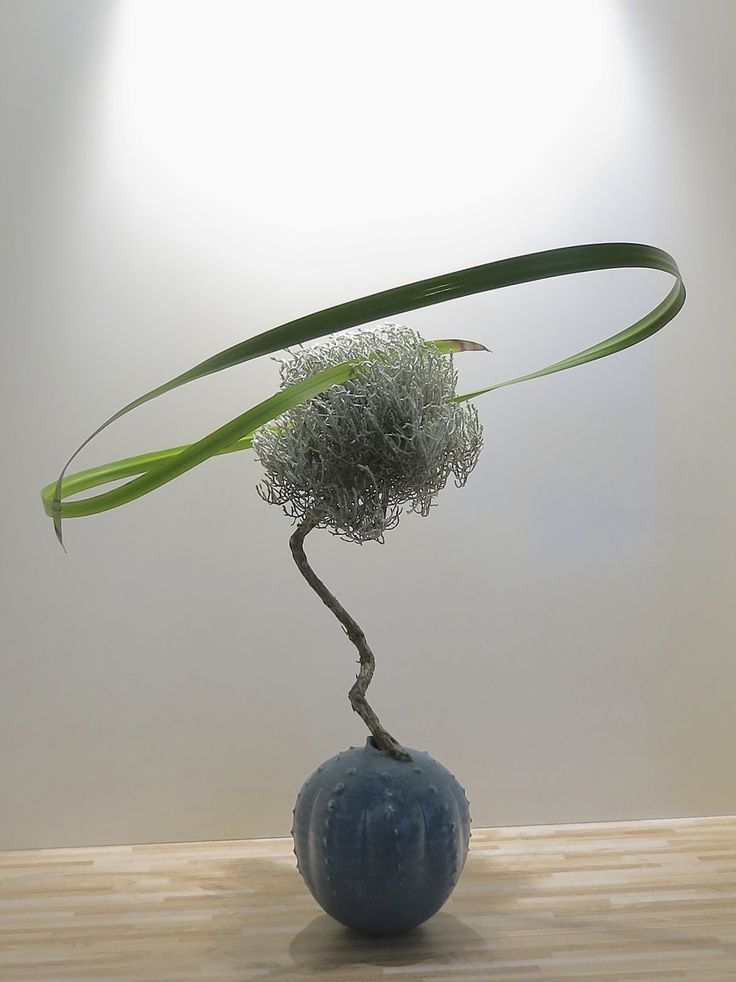 I really liked the composition of this arrangement as it draws your eyes to the center and makes you wonder what plant that is. The ‘floating’ leaf ties the whole composition together and it was something i would want to incorporate into my piece. 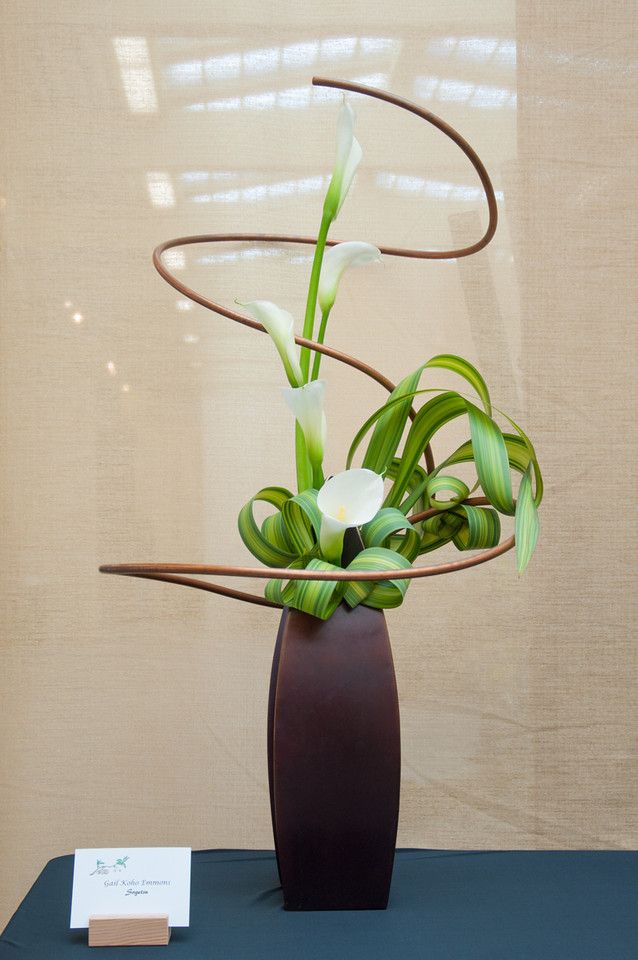 This has composition has the use of a ‘floating’ spiral, however, it draws your attention upwards instead of towards the center.

I started to brainstorm on the things I would relate to summer.

Colours I could consider: Vibrant tones such as orange and green. Even tropical colours such as yellow and pink.

To gain further inspiration, I searched for photos of Japan in Summer to get a better feel of the colour palate I could make use of. 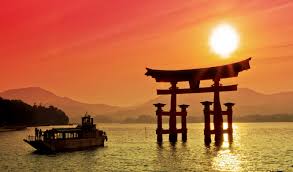 As you can see in the pictures above, there are very warm tones of red and orange, with a hint of pink.

I also looked through my recent trip to Japan for references I could use. Although I went to Japan when it was early spring, there were some photos I could make use of! 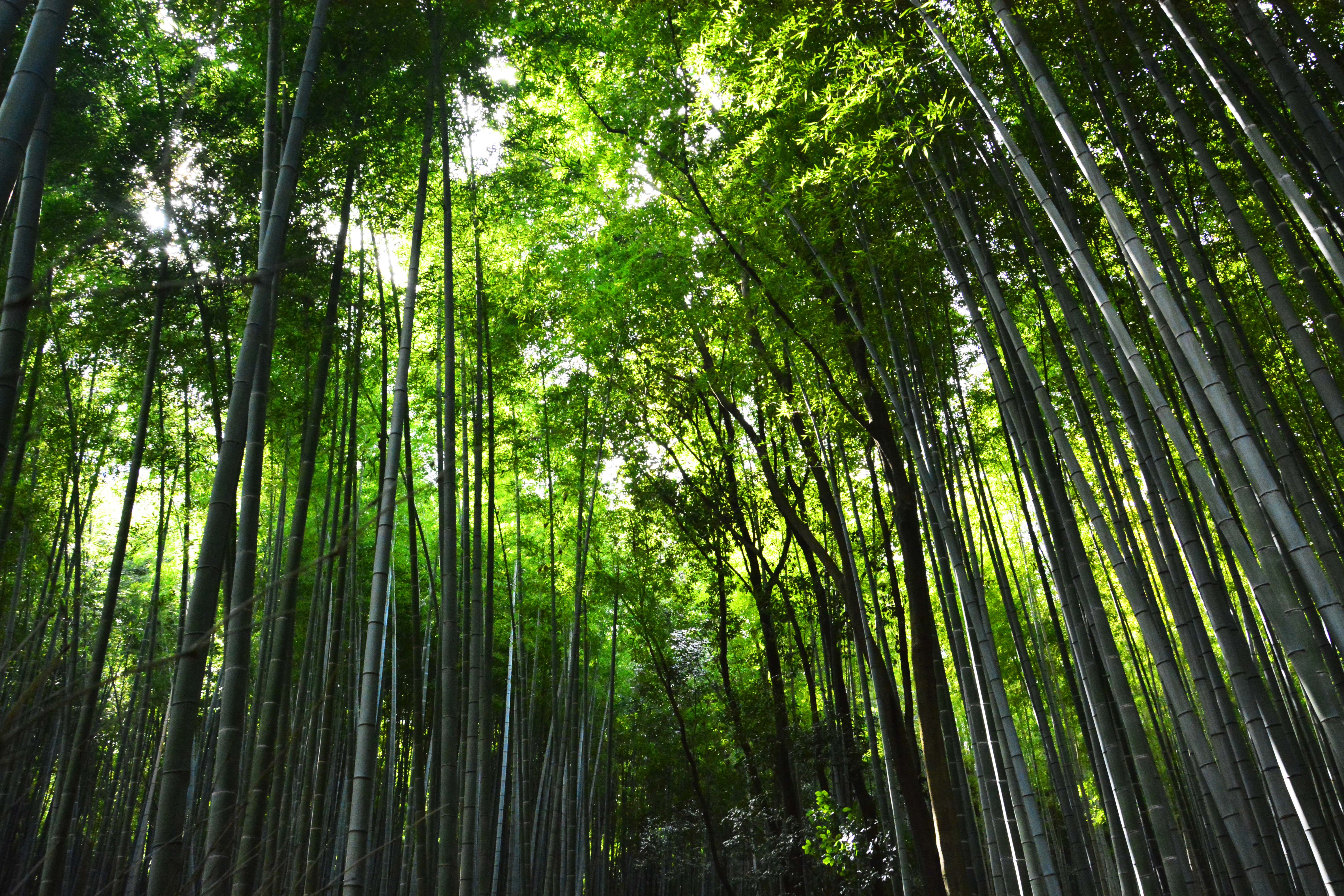 Here we have the bamboo forest located in Arashiyama, Kyoto. The towering bamboo sprouts constantly draws your eyes upwards, where the sky is covered by a canopy of bamboo leaves. 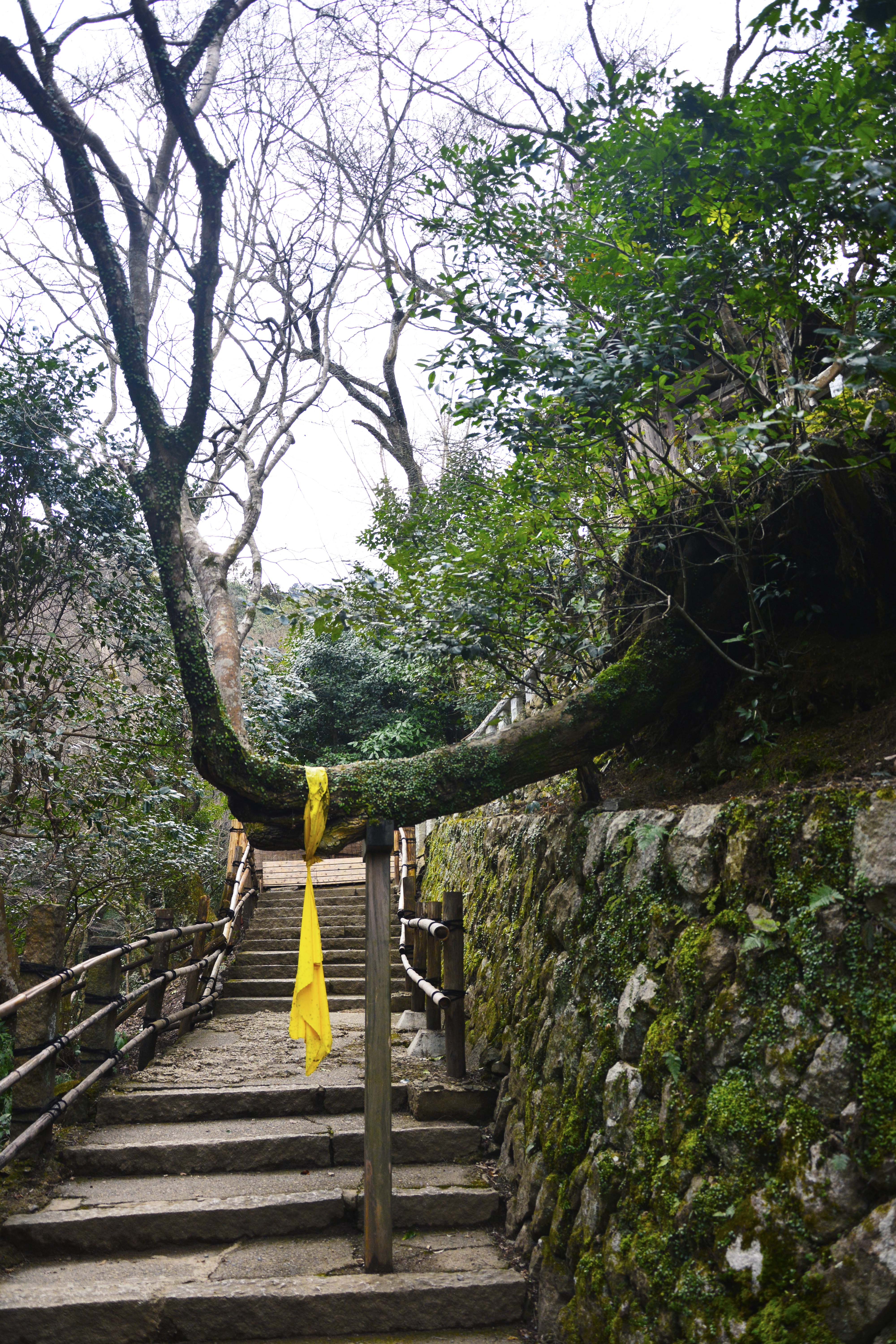 I came across this pillar supporting a tree on one of our hikes. This trail lead to a shrine deep within the hills or mountains located in Arashiyama, dedicated to those lives which were lost while constructing the lake which runs through the town, known as the Katsura River. I liked the shape and look of this particular tree trunk and I wanted to incorporate it into my composition to show life.

If you have time and want to check out my trip to Japan, here’s my travel journal!

I also wanted to explore the usage of drift wood to as a base as it ties into the theme of having life sprouting from it. Drift wood also have many interesting compositions and it is different from every angle which makes it dynamic. 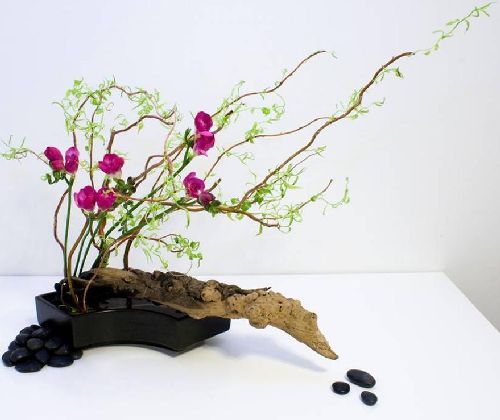 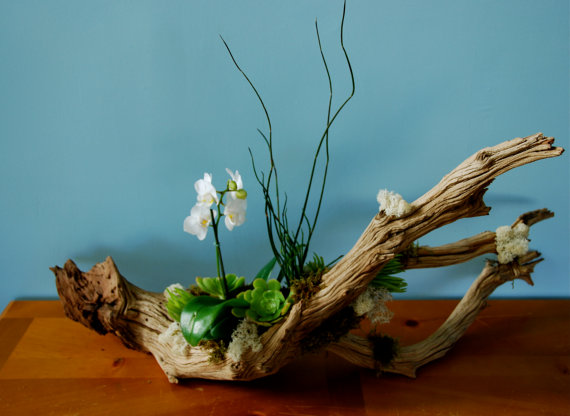 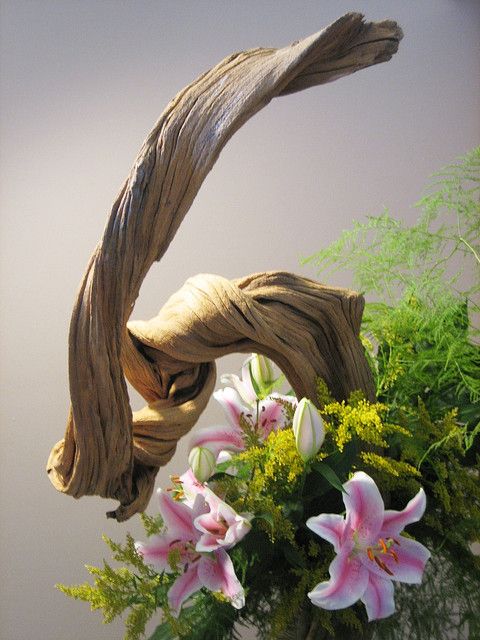 I managed to get a hold of several pieces of driftwood which I have used before in previous projects.

The objects I really wanted to be represented in my composition were: the Sun, peaches to represent summer, drift wood, greenery to represent life. These were my building blocks for my model. 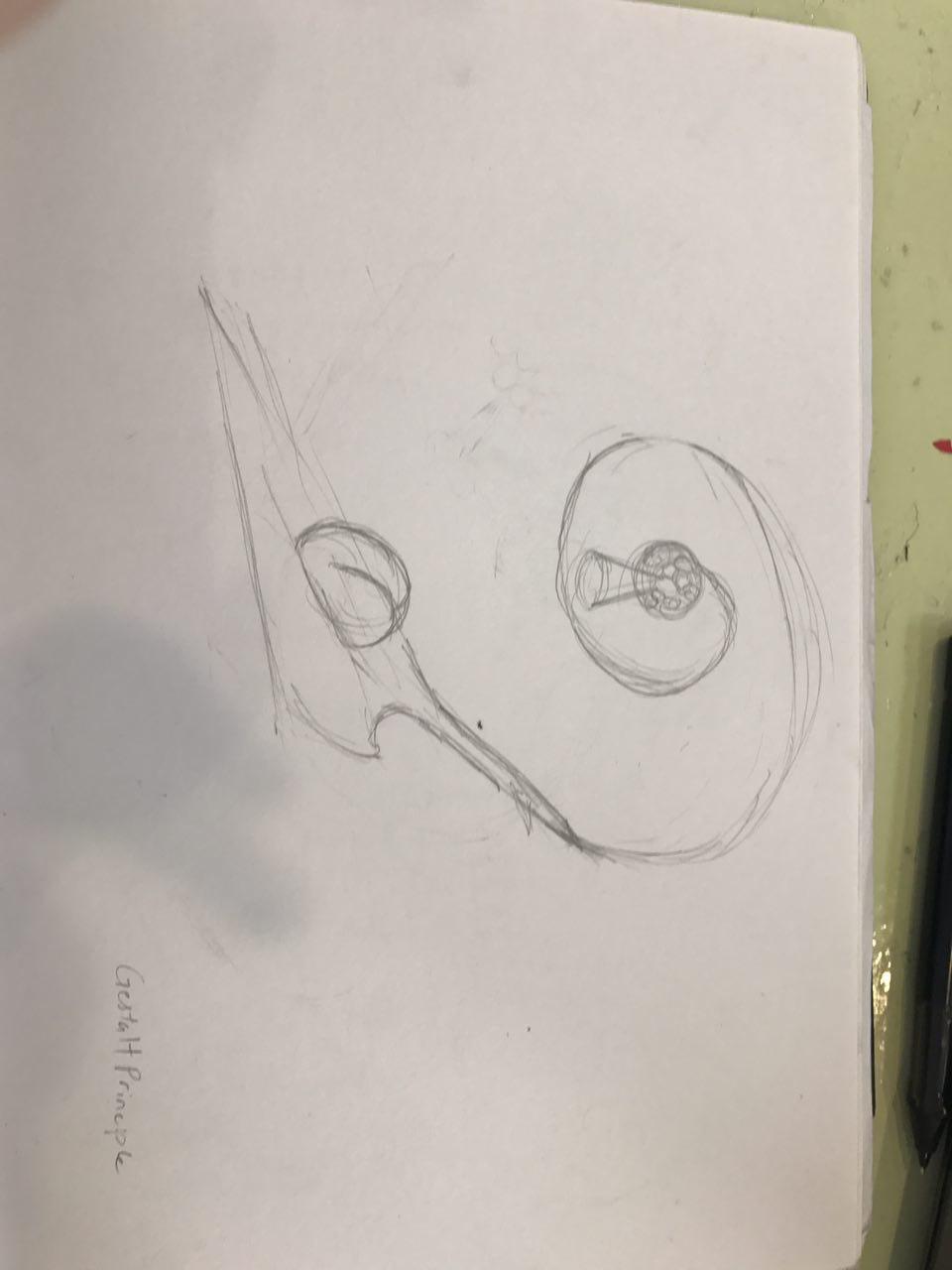 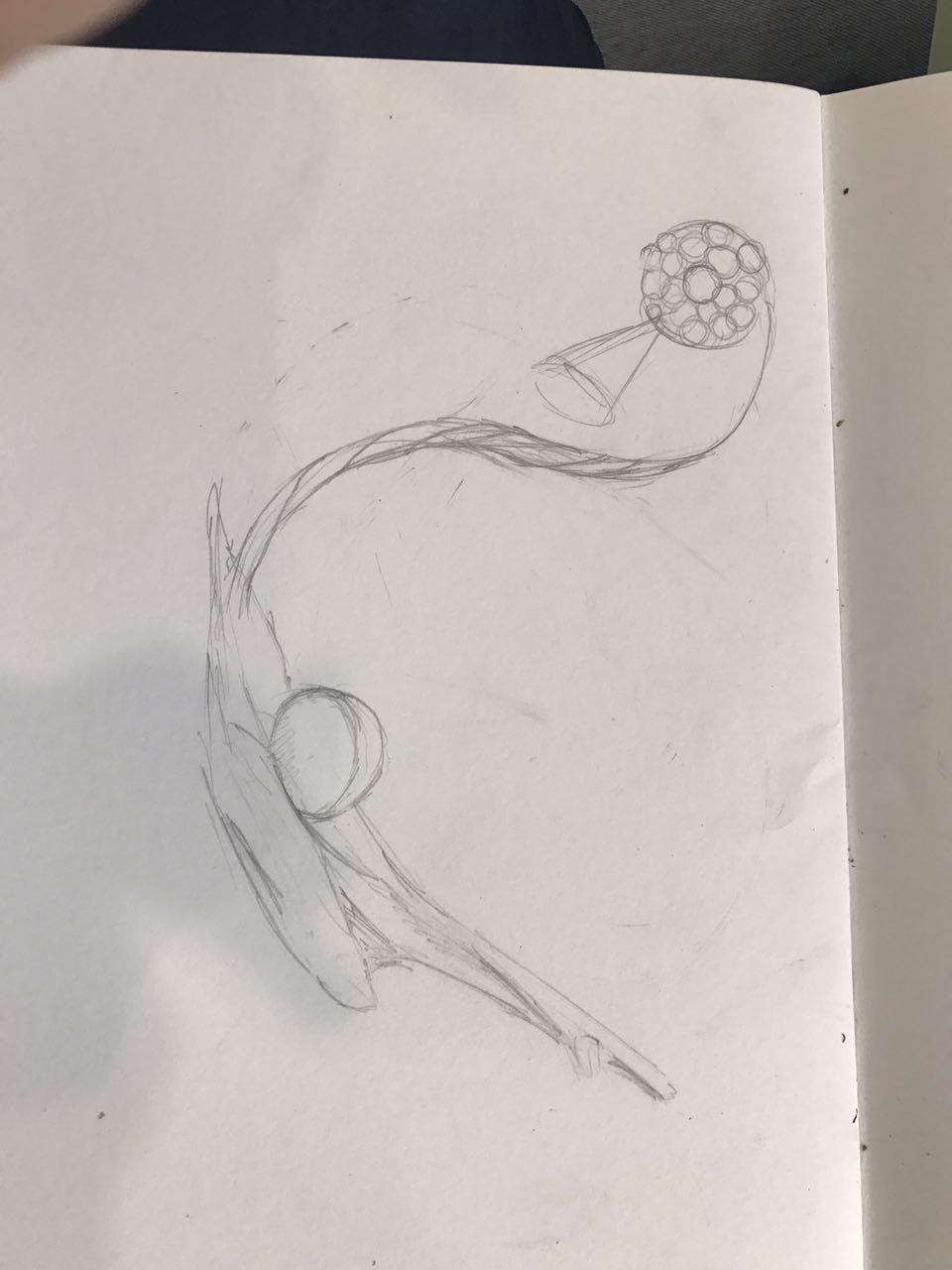 During these Sketches, I was trying to figure out the composition of the leaves and what to place at the end. My idea was to form a sphere out of cones to use as the sun, then I would have a protruding cone to represent a ray of light. However, I realised that it would create a confusing composition as your eyes are not drawn to anywhere in particular. Therefore, I decided to use something simpler such as a painted ping pong ball to represent the sun.

I also had an idea to use the Gestalt in my composition as I wanted to cut up the peach and lay it on the wood to form an implied sphere, where the sum of its parts is less than its presence.

However, it was difficult for me to do that as peaches have a large seed which would be difficult to cut through and I would not have any proper surface to lay the peach slices on. This would be touched on later in my process.

I decided to choose the first piece (I forgot to take process pictures) as it has a protruding body, which would resemble a cylinder and it has a more elegant shape to it. This piece also had a curvature upwards which helped give the model a certain ‘flow’ to it. The second piece of drift wood was immensely big and I found that many of my elements would be overpowered by it. 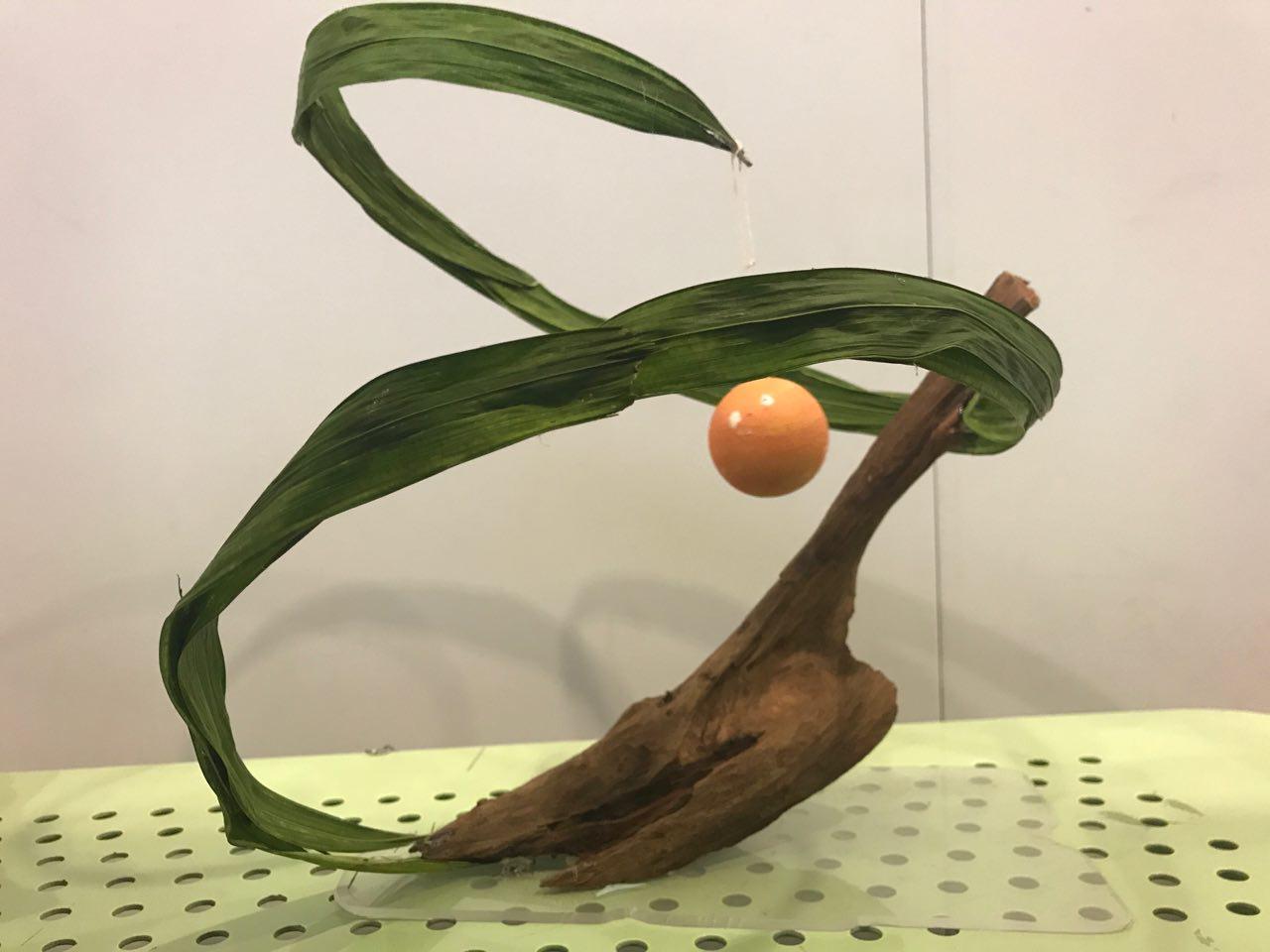 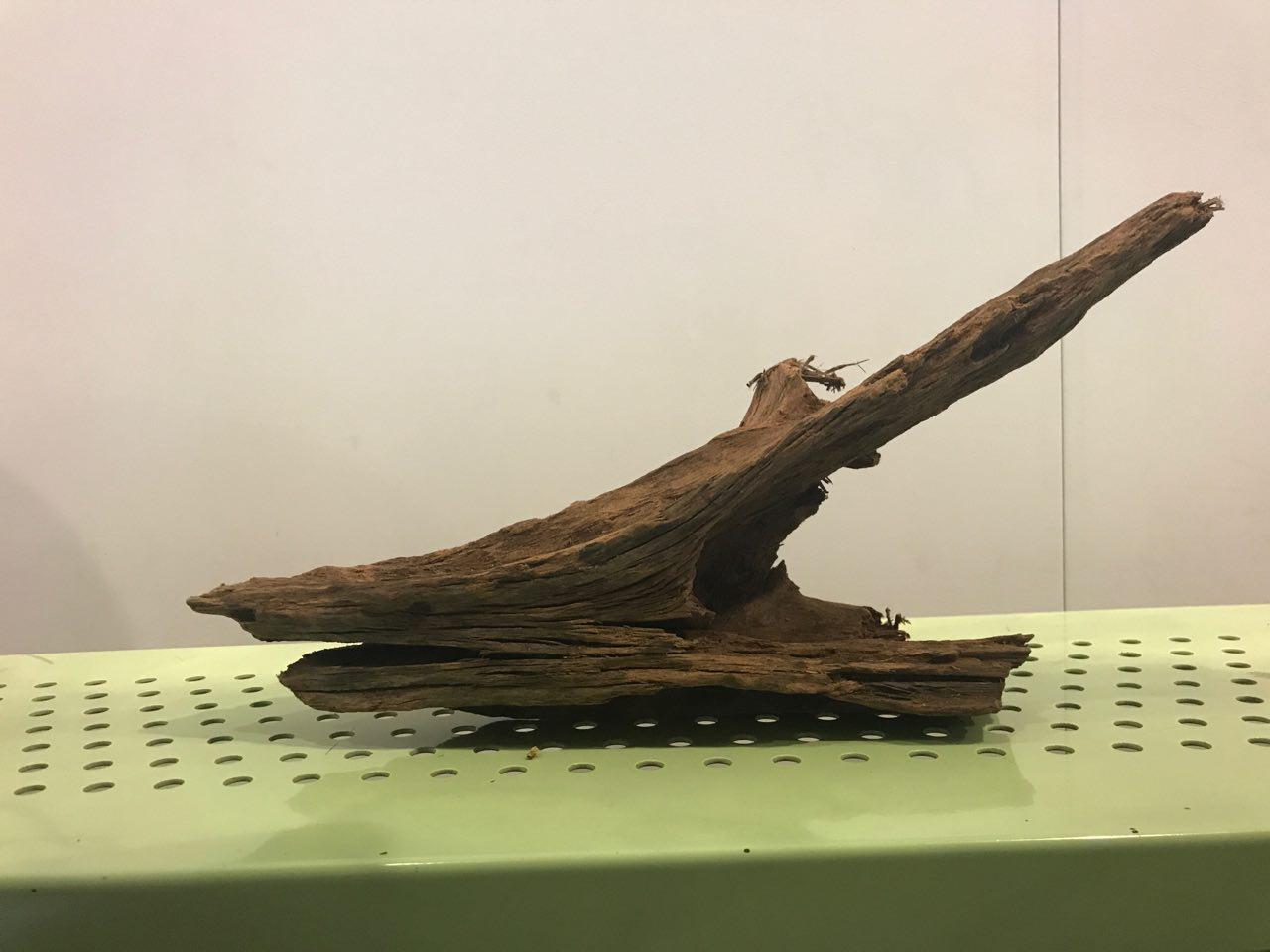 To have the ‘floating’ look, I had to use a spool of thick wire to form the structure. After which, I etched grooves into the drift wood to enable the wire to have some support. I also had to file down the wood as there were a ton of splinters on it. 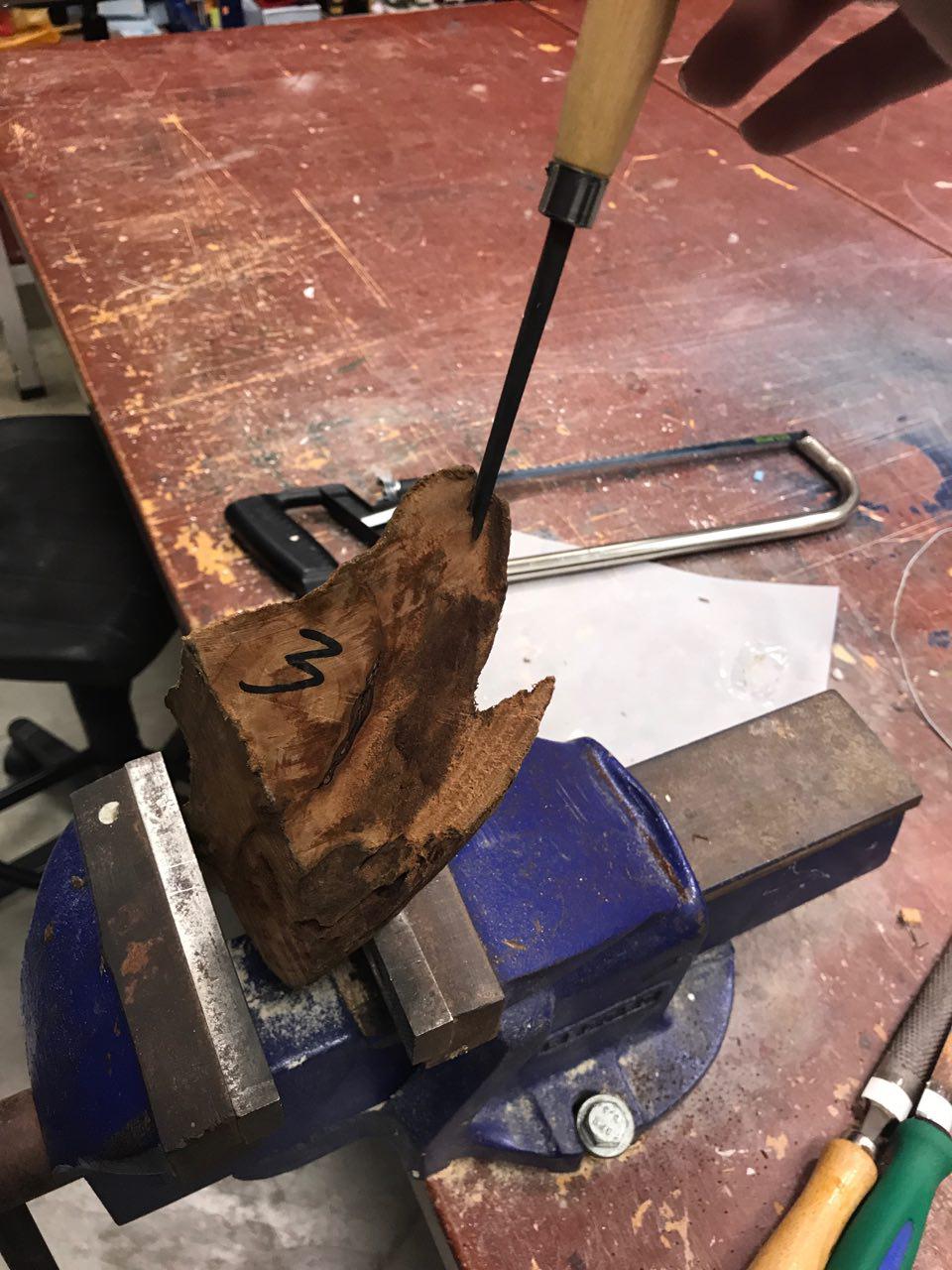 I also sanded down the acrylic board as it initially had very straight and inorganic edges. I wanted it to have a more natural shape which would resemble a tree bark. 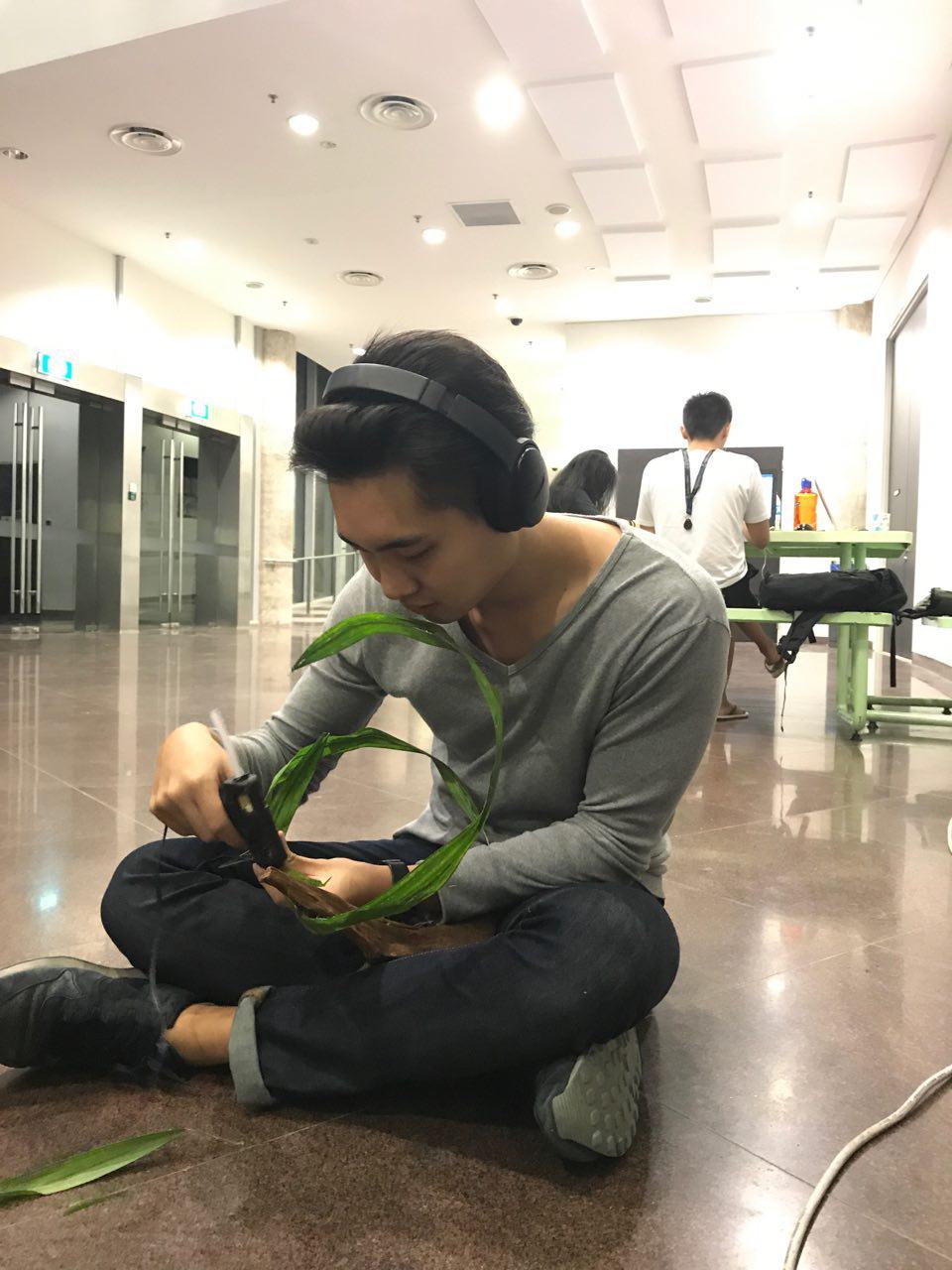 Going back to the idea of using peaches as my main object of Summer after I realised that it was difficult for me to plate my peach as well as create an attractive SO out of peach slices, I tried to form a flower out of peach slices. This would represent the blossoming life in Summer. 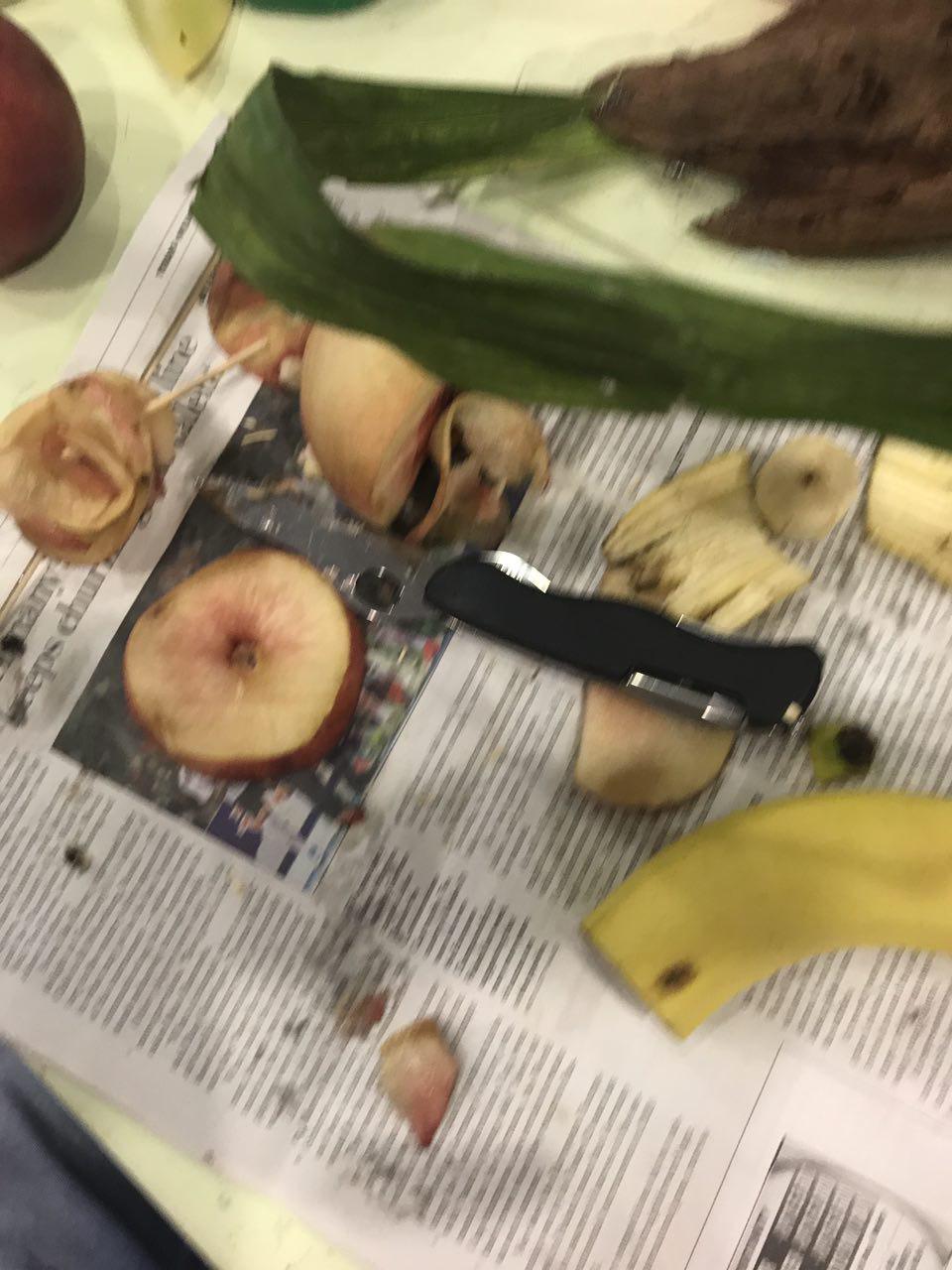 I also experimented with banana peel, however it was too flimsy to be crafted into a flower. As bananas had a strong yellow presence, I felt it would have been a good fruit to represent summer. 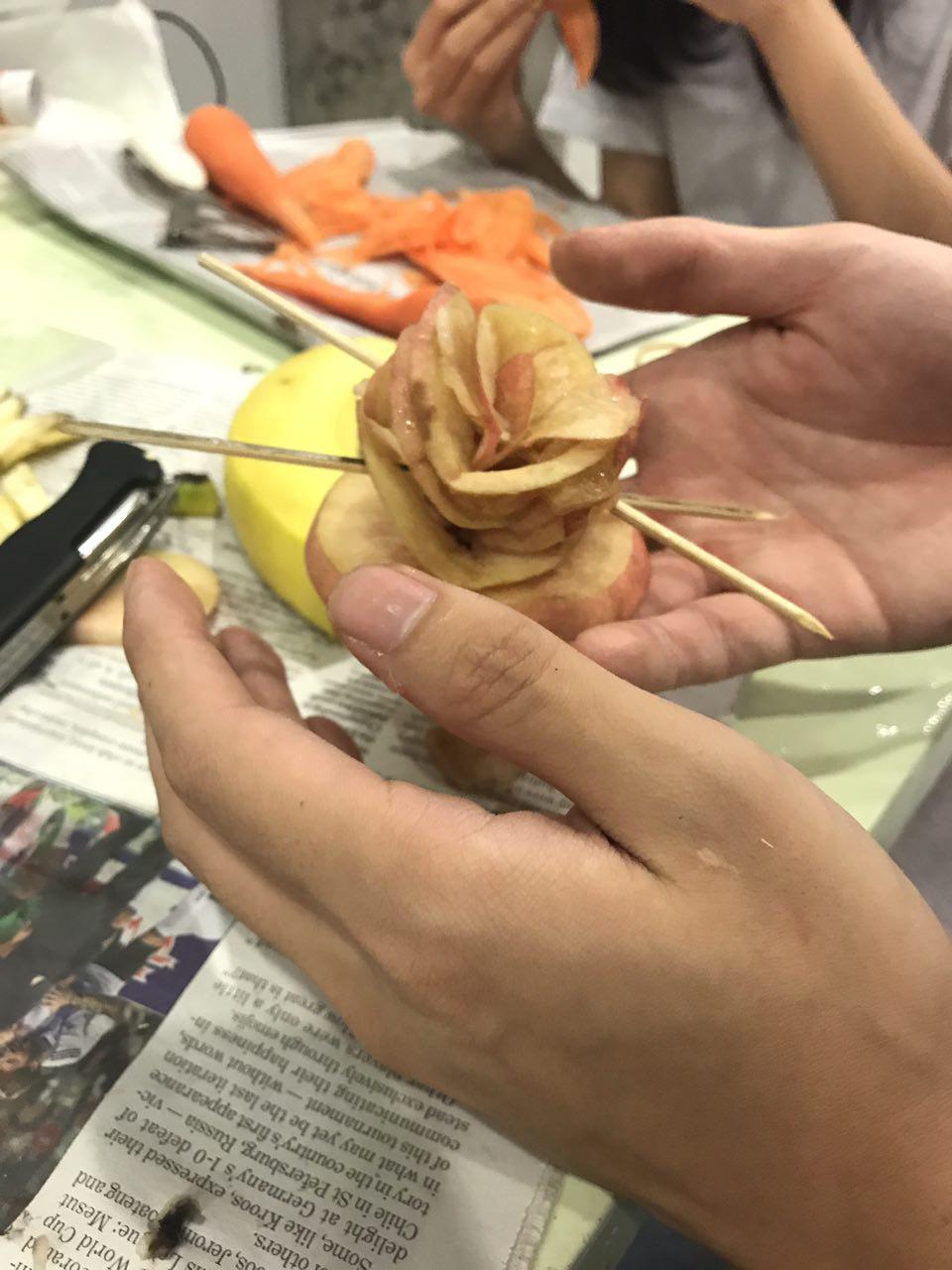 Alas! I finally crafted a flower out of a peach! Huraaah!! It took me about 45 minutes to carefully cut the slices and gingerly fold them. However, things were not as rosy as it seemed as the peach started to oxidise and lose its form, turning into this dull mess below. 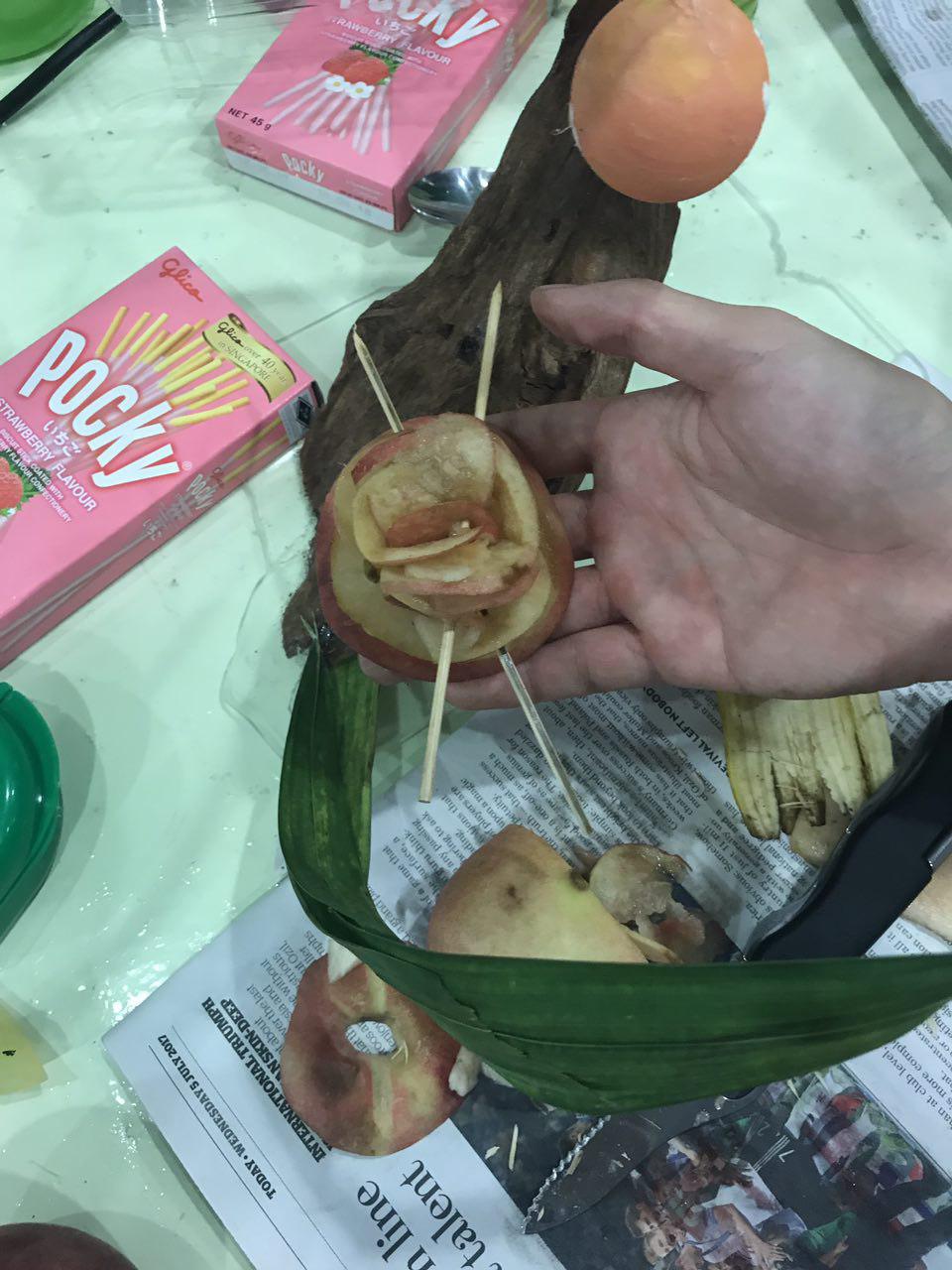 I looked to my right and lo and behold! My classmate was working with carrots which were also a summer food and it is vibrant orange! Carrots also wouldn’t easily lose its structure and colour if left out for long. I decided to use carrot strips instead and put a peach as a base for the carrot to rest on. 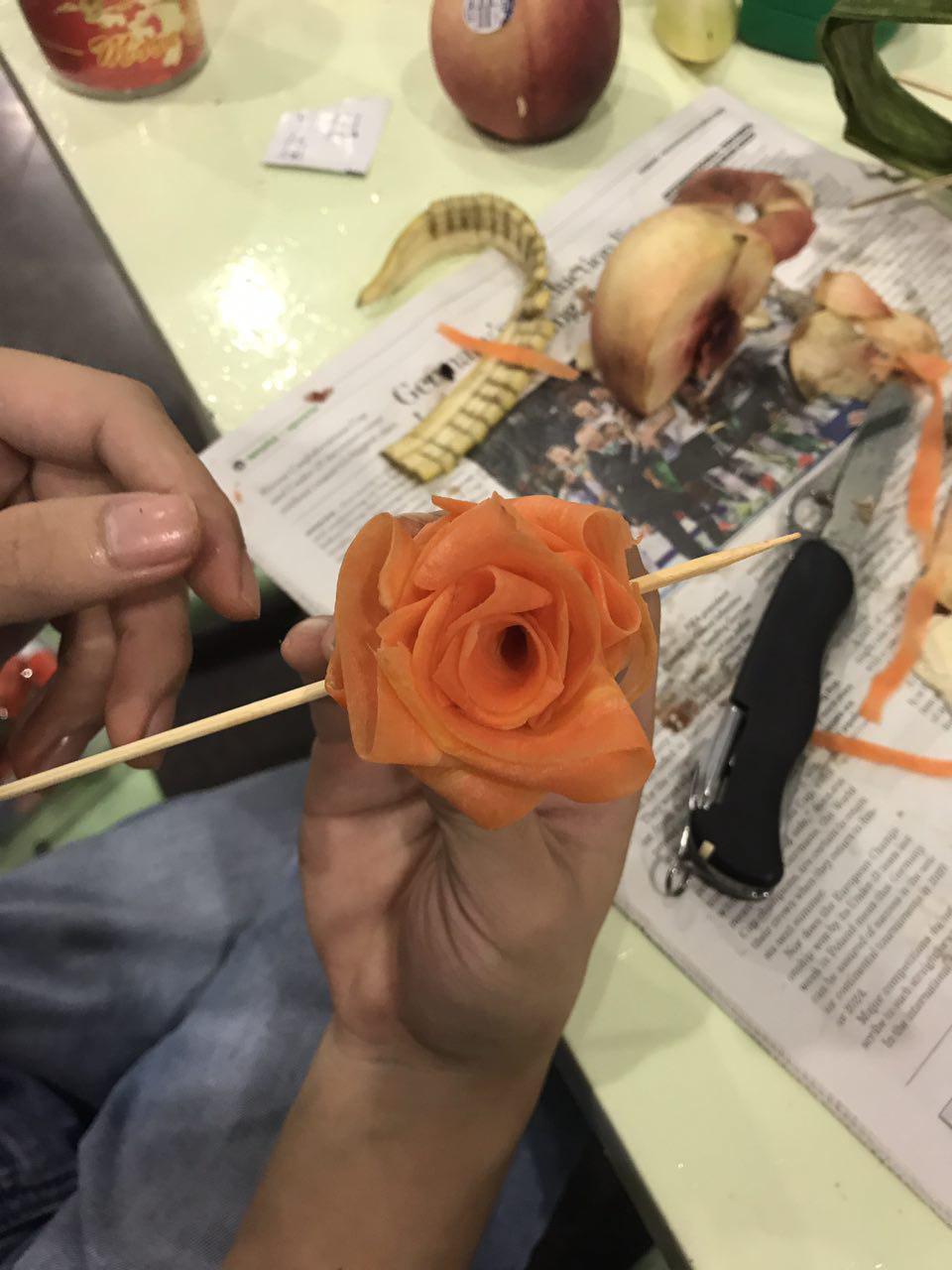 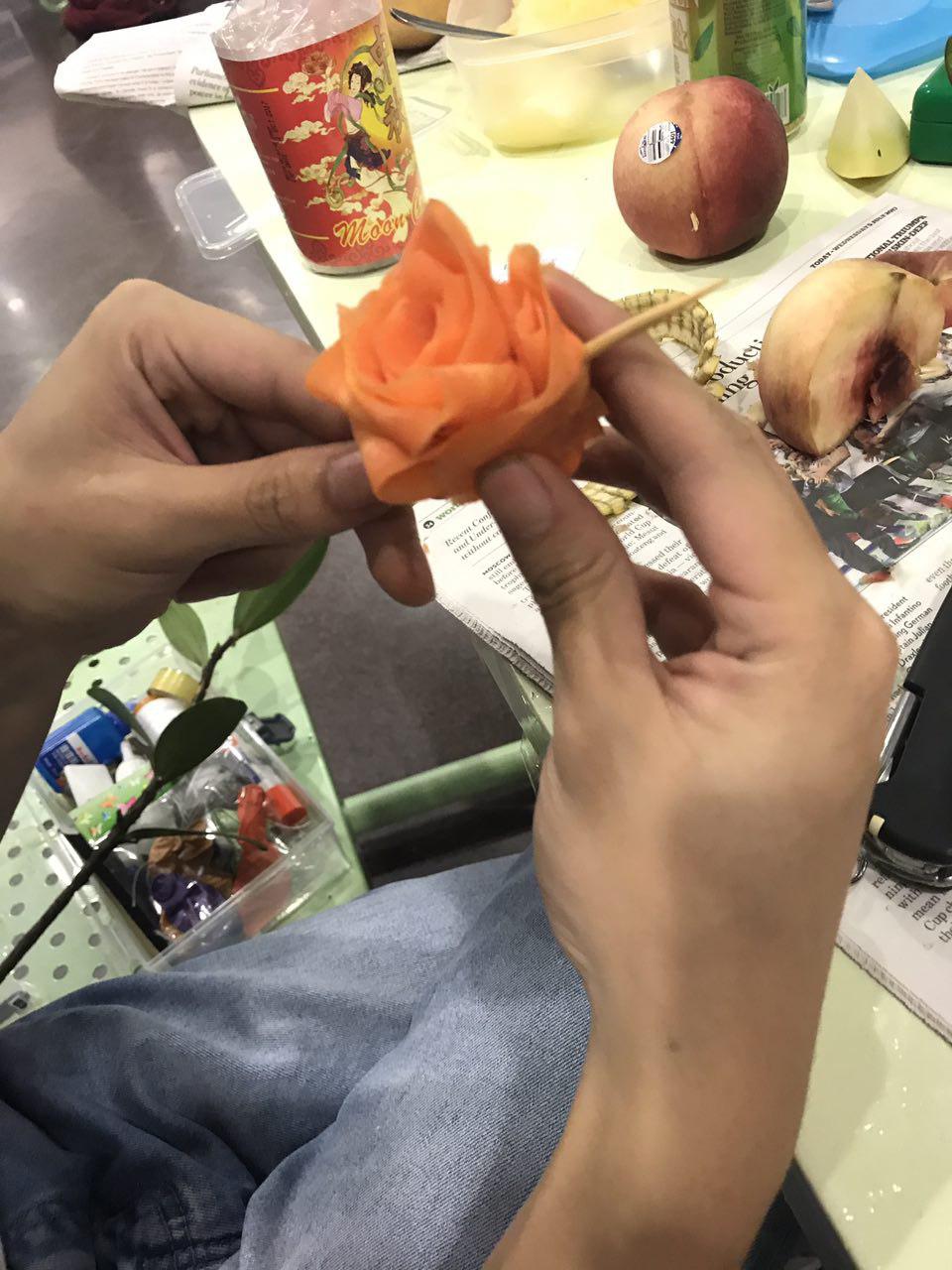 Thank god for supportive classmates! The carrot was much more manageable to work with because it could be bent easily.

After that, all that was left was to plate the model! 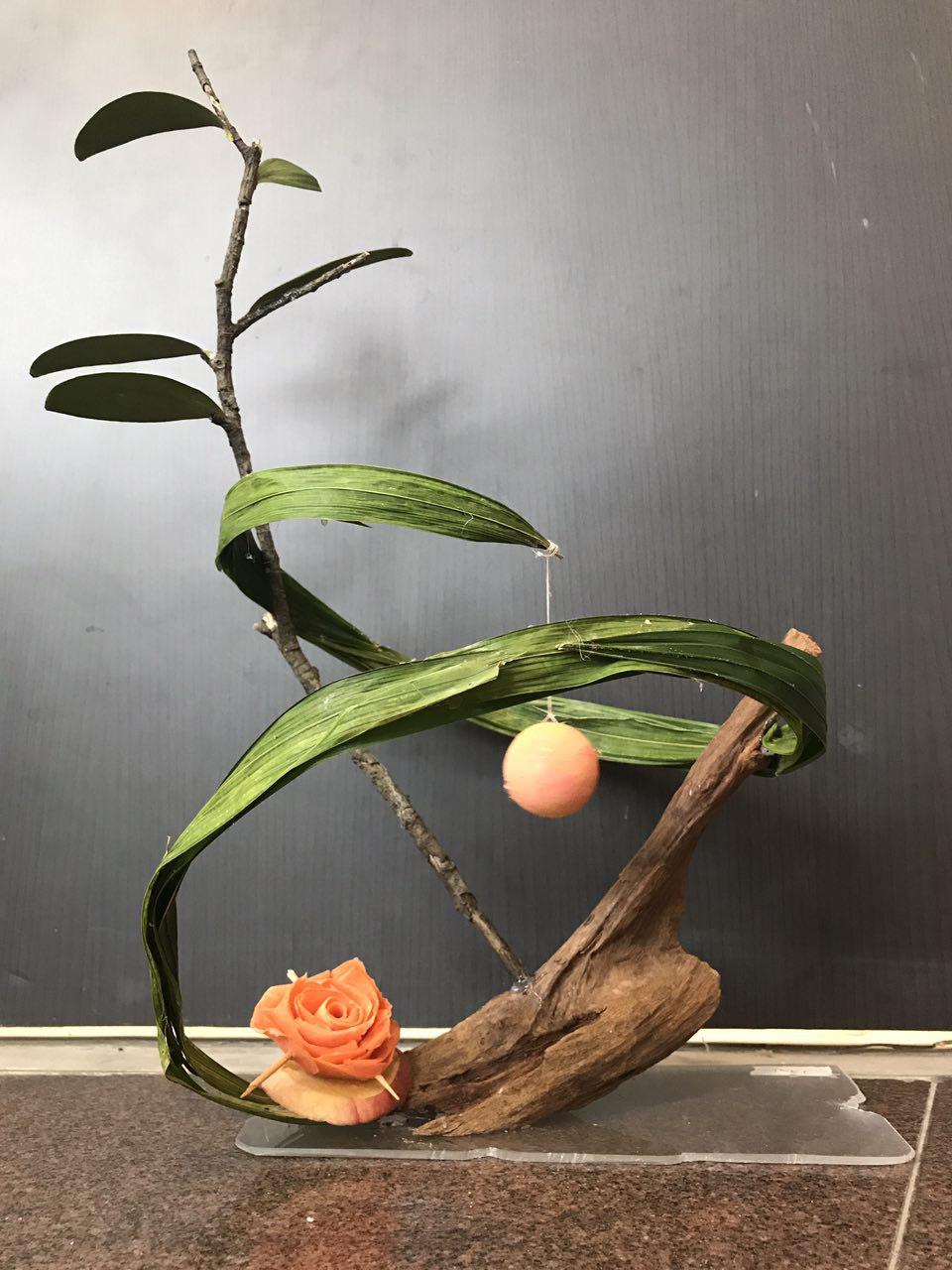 As you can see, the spiral forms an implied cone which draws your eyes towards the branch with leaves. This would show the life of spring and how vibrant it is! After which, you would be drawn to the orange sphere which forms the sun, and after that the flower which is made of carrots, with a hint of peachiness at the bottom. 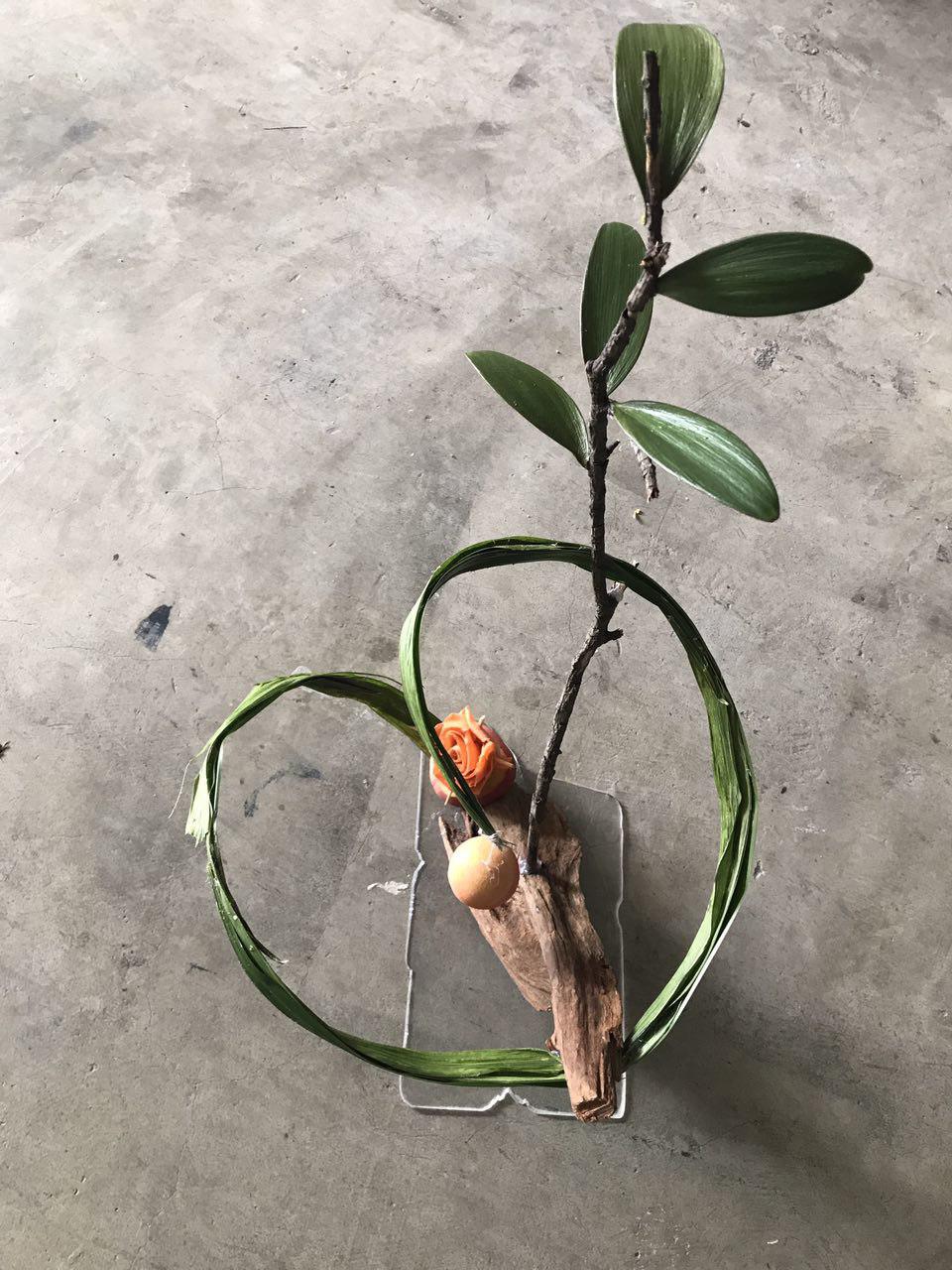 From the top view, my model forms a peach as well!

One thought on “Ikebana Research and process”