My eyes were literally opened for these 3-day online workshop that focuses on Art of the Networked Practice online symposium. I have attended day 1 and 2 of the workshop. And the 2 days alone blew my mind, it was an overwhelming experience. Social broadcasting enhances the various possibilities of collaborating within third space; it’s convenience for people to communicate in real time without having to be at the same location. Apart from having it’s advantages, it has it’s disadvantages as well, glitches and the responsiveness is inevitable.

This performance was performed whereby Annie Abraham and few other collaborators where they took part in a DIWO collaboration through the third space, creating a intimacy between the collaborators. For this particular performance, all the performers to have their eyes shut till Annie instructed that she would give a specific signal for all of them to disconnect one after another through sound. Unlike traditional On the other hand, Helen encountered a technical issue on her side, resulting of her failing to follow the instructions. It was then to a point where her eyes are still shut for quite sometime so everyone else assumed she had fallen asleep and some of the collaborators tried typing in the chat in chance of catching her attention but failed miserably. This created a form of glitch whereby this platform should ought to be convenient, making peoples’ lives much easier but due to unpredictable circumstances like lag, technical issues Instead, it brought much more inconvenience to the performers.

Another segment of the  performance whereby the collaborators are constantly placing/ changing random objects in front of their camera and also their very own interpretations of politics, different voices that shapes the environment. It is interesting how the performers can come together as one, doing the same exact movement like as if they have met one another or as if they have known each other beforehand. Different people values certain objects differently, like in this segment, we are able to see such varieties of objects placed in front of the camera can have a different meaning to it. 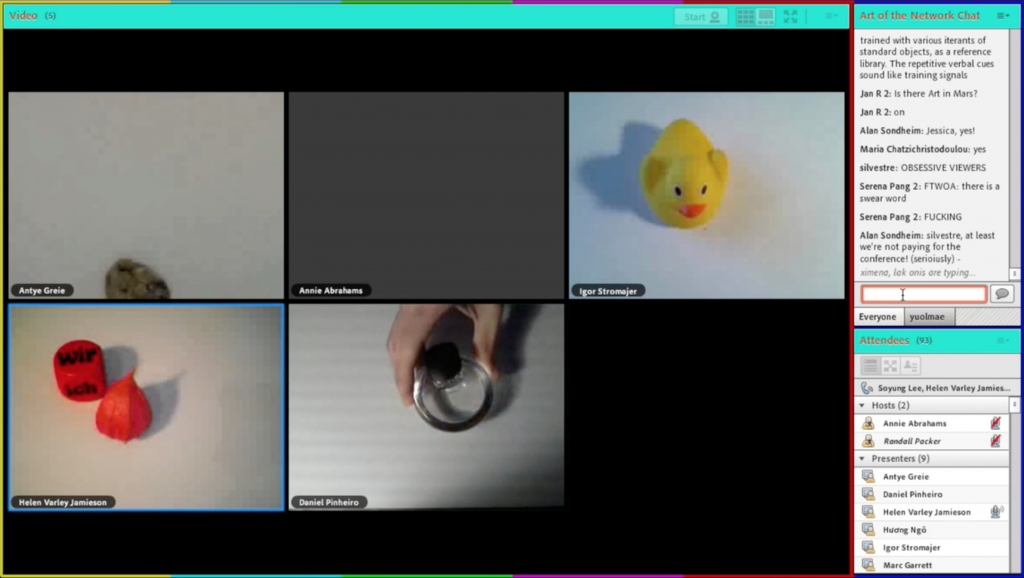 Matt Adams discussed about Blast Theory and some of their projects. Blast Theory cleverly made use of the third space that connects people both online and offline. His projects mainly focuses communications and control whereby in one of his projects, Kidnap, a performance that having two participants being kidnapped into a safe house for 48 hours under the watch of online audiences. The audiences were given control of the cameras in the cell where they can move freely and also communicate with the kidnappers. It is how scary that what is happening on screen may not be real but how it might happen in anytime, anywhere which people watching but unable to do anything about it. The ones that got kidnapped would be able experience something out of their comfort zones. This project managed to raised the awareness of several social issues and also gotten overwhelming responses from the public.

Overall, through this I have been clarified a lot regarding DIWO, third space and glitch. It was truly and experience with all these artists out there. I’m glad that I’m able to embrace the glitch more.