For this project, blue foam was the medium we used. Our glitch interpretation is divided into 5 stages, each of us performed one glitch;

First stage; we used a chisel and scratched the surface of the foam back and forth. This created multiple ridges and indents which led to the Third stage. Second stage; continuing with the chisel, we randomly stabbed into the foam. The difference between scratch marks and the stabbed holes can be seen clearly. Third stage; with the indentations, it was fairly easy to break the foam onto half using bare hands Fourth stage; we dripped superglue onto the ridges in order to stick this piece back to the original foam but the glue corroded the foam instead. Fifth stage; we clamped the foam onto a clamp

We filmed the whole process using a phone camera without any stabiliser, and naturally our hands would tend to be shaky. We also filmed the last stage of our glitch on time-lapse. The shakiness added intensity of the destruction and also creates a form of glitch during the destruction of the blue foam process. With the added video editing effects on the last part of the glitch, it distorts the whole video as well as the subject making it unnoticeable.

Those systems might be broken, they might be glitched, and they might be imperfect and noisy, and that might be what attracts us or me to those systems. But still they are functional or functioning in one way or another systematically. So they are connected to one another as assemblages. – Randall Packer; Glitch Expectations: A Conversation with Jon Cates.

Our idea was to destroy a piece of blue foam and then try to piece the broken pieces together using superglue. We didn’t had a plan for the sequence on how we’re going destroy the blue foam, this allows us to embrace the imperfections we made during the process instead of doing it systematically. Typically perfectionist artists would want to cover up the imperfections and only express the perfections.  Things are prone to deterioration in time to come. At the end, we have learn to accept the flaws and imperfections in the world be it in the context of an art work or human being. 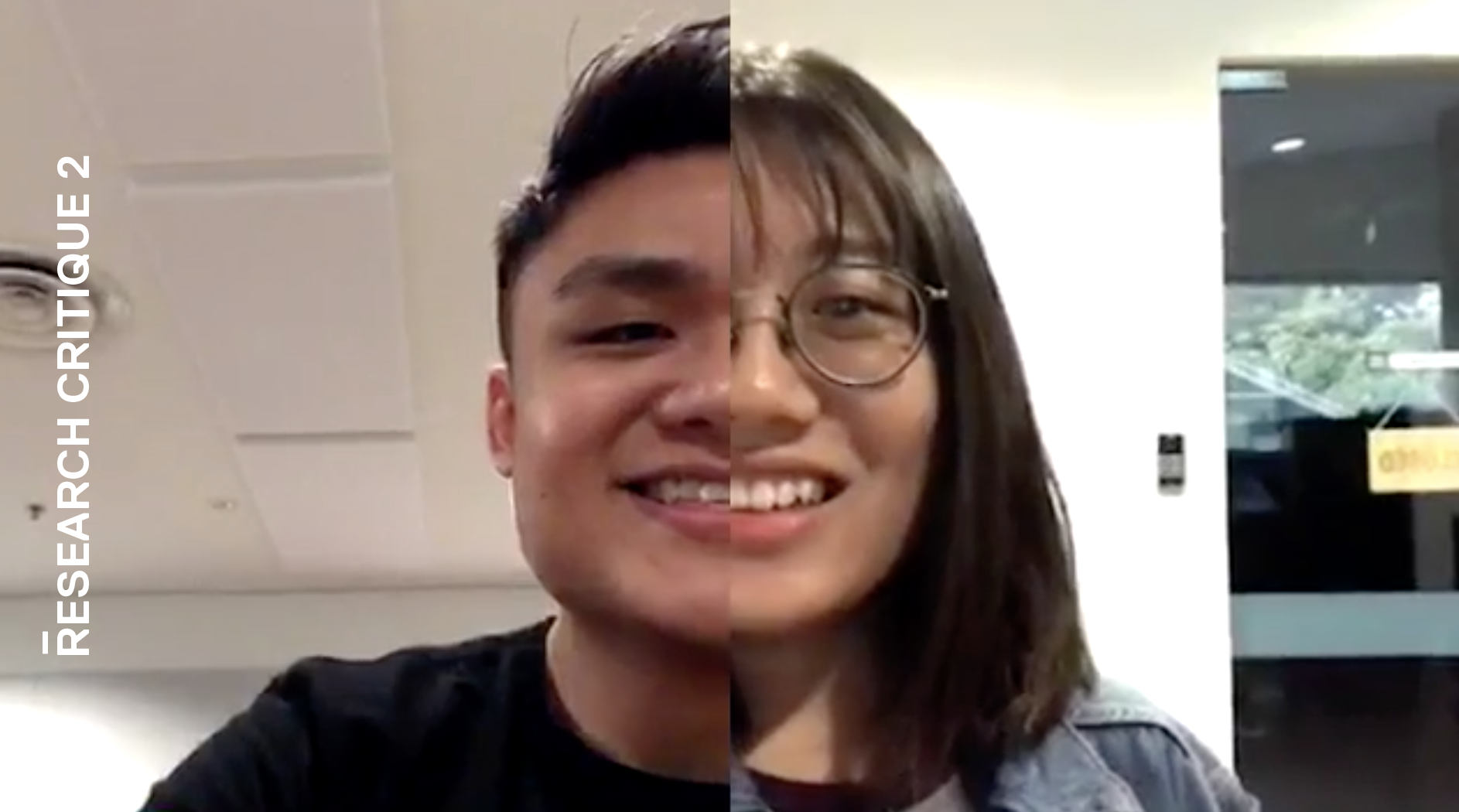 The Third Space is a space that is commonly shared among, nowadays and it is  also able to connect people together no matter how far they are apart.

“But most startling is the fact that the third space is simply an integral fact of everyday life in the 21st century.” — Randall Packer, The Third Space

The boundaries in the the third space is being break down in terms of time and space whereby is it surpassed in the virtual space.  It manipulated our senses into that we both are very close to one another. The closeness could be seen through our conversation between the both of us.  It seems like we are literally at the same location seamlessly.  The intimacy were created whereby we both refilled the “same bottle” for one another and shared the “same bottle”.

“… based in distant physical locations could meet and perform together, in the same “living image.” – Maria Chatzichristodoulou, about Satellite Arts Project

The collaboration between us where we passed the bottle across the two screens and shared the bottle. The conversations we exchanged in the third space created the illusion that the both of us seems like we are interacting with each other side by side in real time but actually we are not.

Therefore, the third space does not only increases the intimacy between the two parties but also bringing back the connection relationship we have all lost in time due to technology advancements. 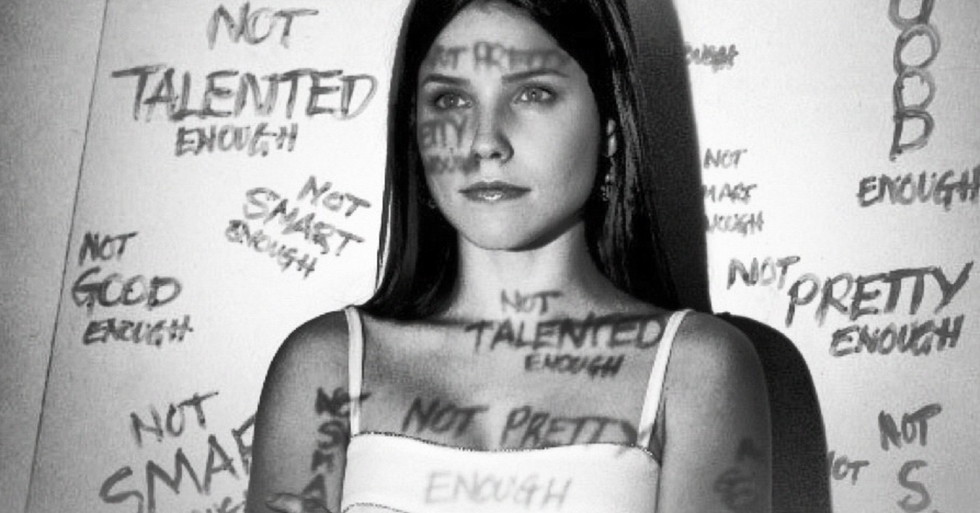 A collaborative project with Amanda and Karen.

The topic we touched on was low self esteem. People nowadays in our generation put criticism against themselves at the front. They are worried about how they are perceived by the society regarding on their looks, body or even their personality.

We had Karen stayed still on a chair holding a sign saying “I have low self-esteem. What do you want to comment on my body image? Please write a comment on the corresponding body part.” 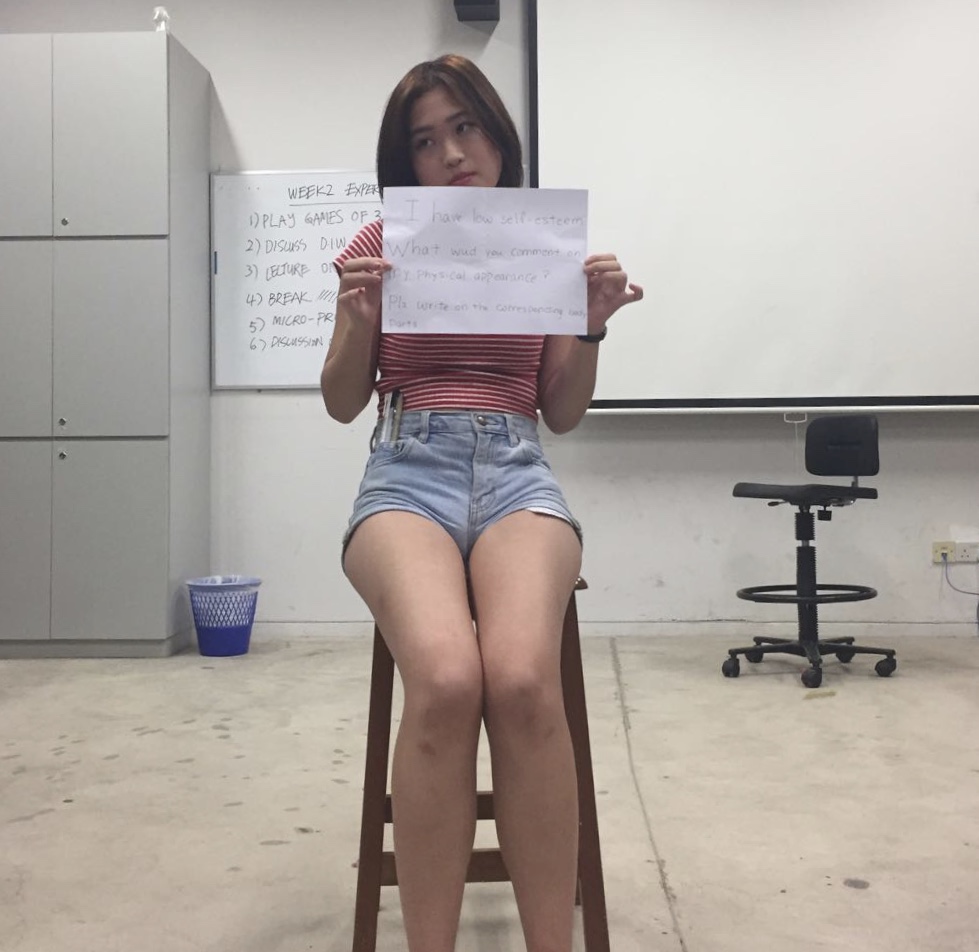 Karen is acting as the supposedly low self esteem girl. She is depressed at her body image and is very concerned about how the society perceived her. Her body acts as a blank canvas and our group had our classmates to put down their thoughts about Karen’s body image directly onto her. We briefly gave them a simple instruction, to read the sign and told them that they could write wherever they want with the provided markers. The audiences would have full freedom/control of the artwork.

The ‘source’ materials are open to all; to remix, re-edit and redistribute, either within a particular DIWO event or project, or elsewhere. The process is as important as the outcome, forming relationally aware peer enactments. – Marc Garrett

The only down point is that people would naturally take a peek on what other audiences wrote. Therefore their thoughts might also change due to after looking at what the previous person had gotten down on Karen.

Our idea is mainly to have audiences to make contributions towards our ‘canvas’ and the process of them putting down their thoughts. Unlike the traditional art making by a single artist whereby the end result is only thing they are looking for. Similarly to Yoko Ono’s Cut Piece whereby we can’t take control of the outcome. The audiences are the ones that will determine the outcome at the end. If there’s isn’t any participants, the blank canvas would remain blank.