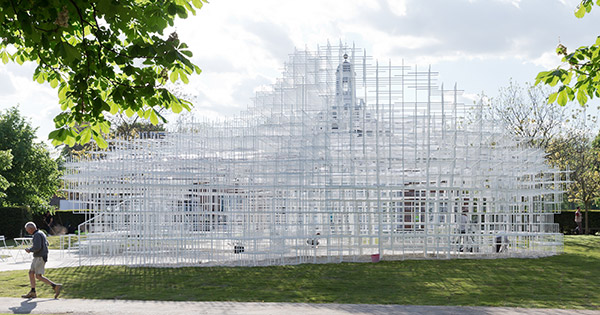 As I approach this project further, I decided to do research on a few relevant artists that were mentioned in class to gain a little inspiration as well as experimenting with the materials I have on hand to build small models. This post will include my processes, research then the final products itself with its practical uses. Do look at my previous post on my initial brainstorming here.

These were the initial idea, as I wanted to make a certain object seem like it is “floating”. Model 1 was my subsequent idea, yet I thought it was not convincing enough due to the material used for the “floating” object. I decided to work with clay to give off the idea of weight even more.

Subsequently, Model 2 was birthed as I worked with a larger and stable styrofoam box. The string was supposed to be deemed “transparent” to bring out the initial idea more. 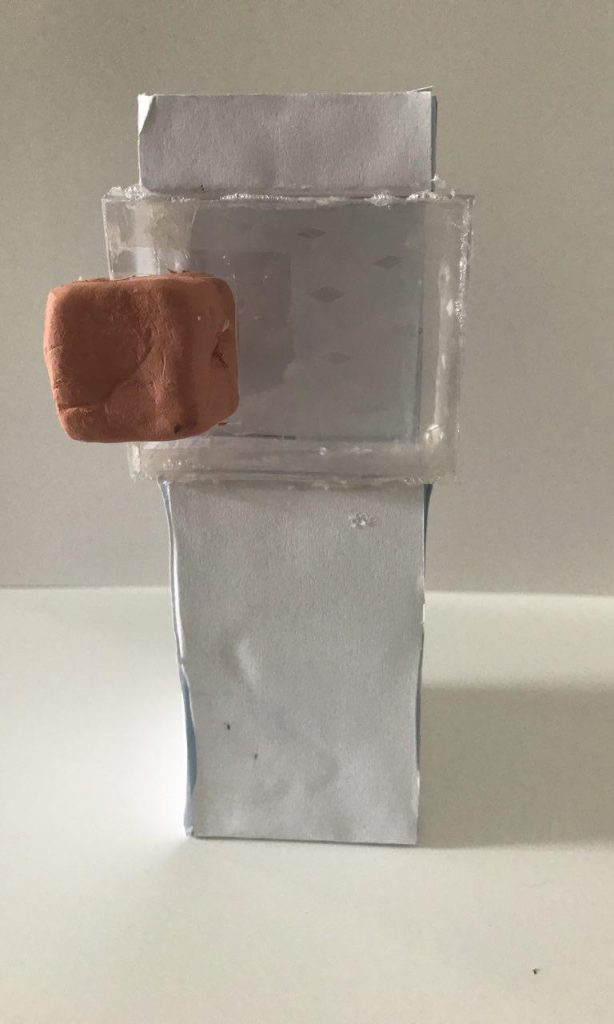 Thereafter, clear plastic sheet were made into a steady box to sustain the weight of the clay. The dominant is made white to place more emphasis on the “floating” clay, bringing out the idea of Magic. 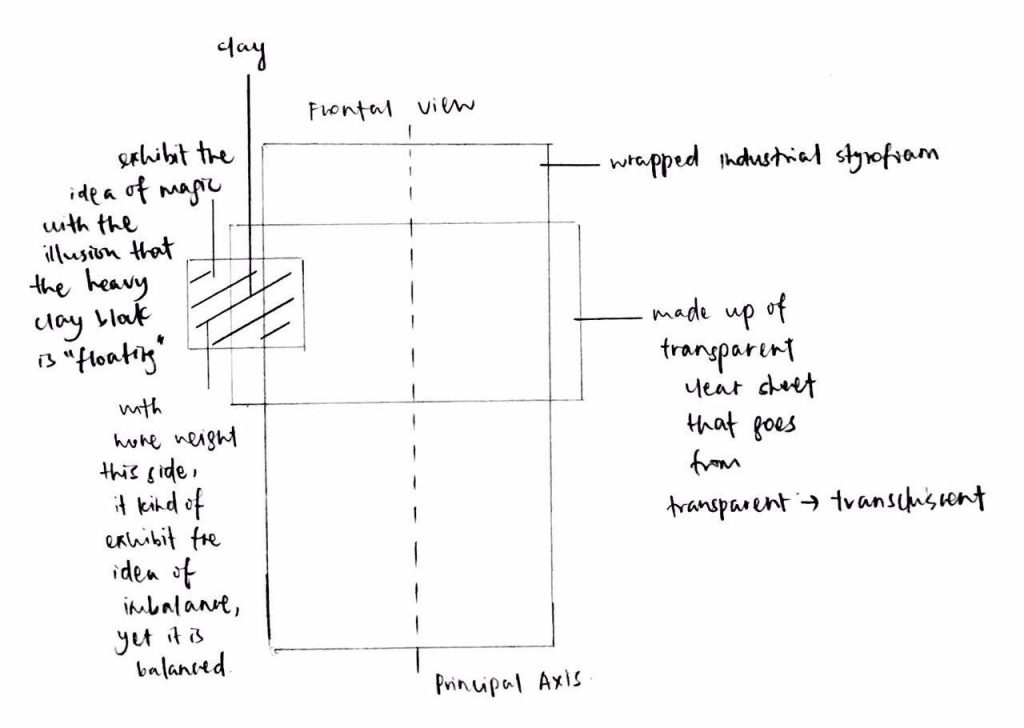 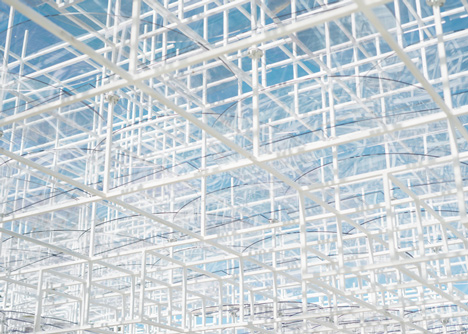 Soe Fujimoto created this cloud-liked pavilion that seem to ascend to the sky with his very clever use of white grid-liked structures that was placed outside the lawn of Serpentine Gallery Pavilion as he tries to combine nature and man-made structures.

How he tap on transparency inspired me to inculcate clear materials like acrylic or clear plastic sheets into my models to accentuate the idea of Magic. Also, I liked his use of white in this architecture as it indeed gave the illusion that the structure is ascending towards the sky, hence seem to be cloud-liked. Therefore, for The Magical (P/T)ower, I made the dominate white to place more focus on the clay material, very much like how Soe Fujimoto wanted to place emphasis on nature rather than the architecture. 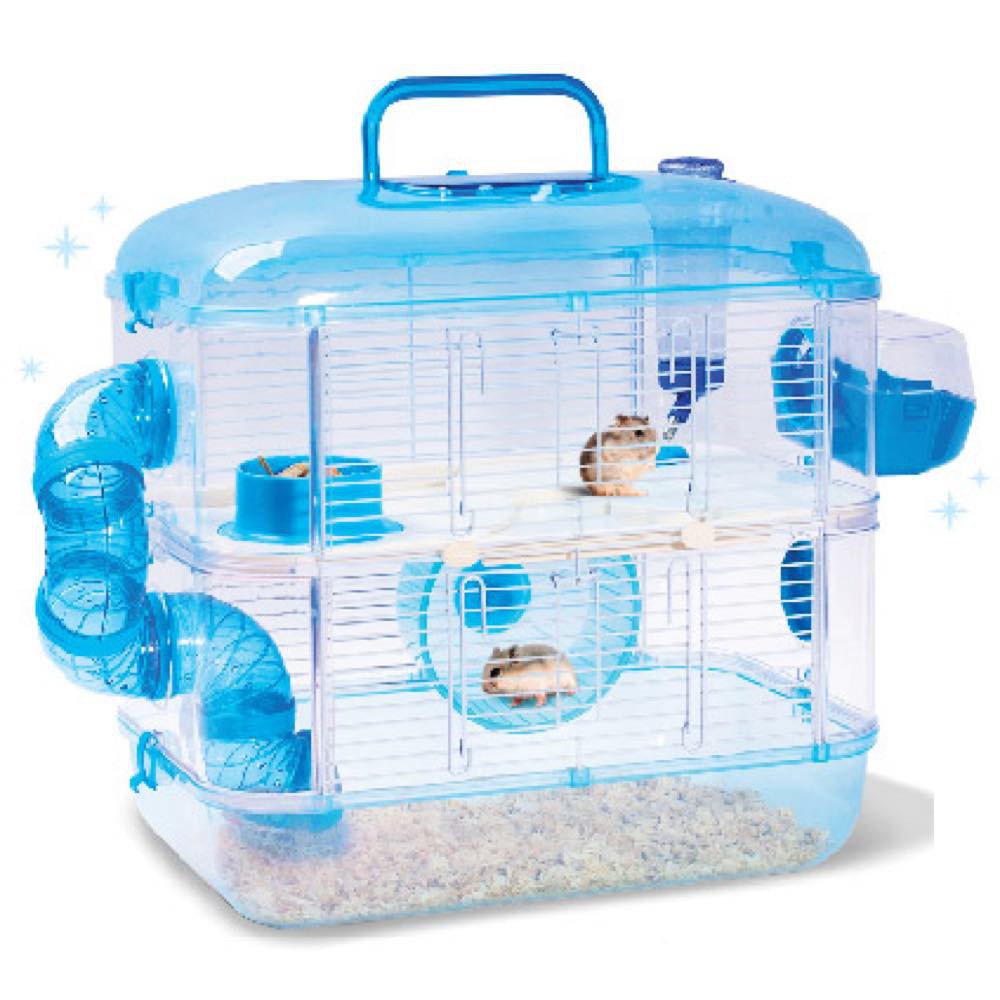 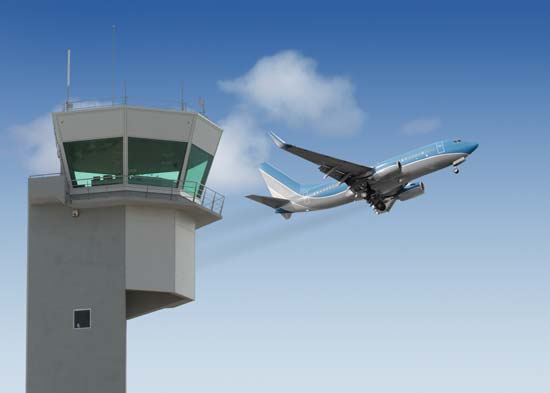 When elevated to a certain hight, The Magical (P/T)ower can be built in a large-scale to be a airport control tower. The sub-dominant transparent and translucent section can be the watch area and the sub-ordinate clay section can be an area to store important machineries and signal devices.

Meanwhile, I also researched on Kasuyo Sejima’s works it inspired me to create The Balancing Trio. The idea of models hovering above ground has been in my head as I approached Magic, as well as the idea of illogical balance.

The dominant is actually an industrial styrofoam, however, it itself did was not able to convince the idea of weight. Hence, I coloured the dominate royal blue.

A clear small piece of plastic was used as the sub-ordinate to hold both the dominant and sub-dominant in place. 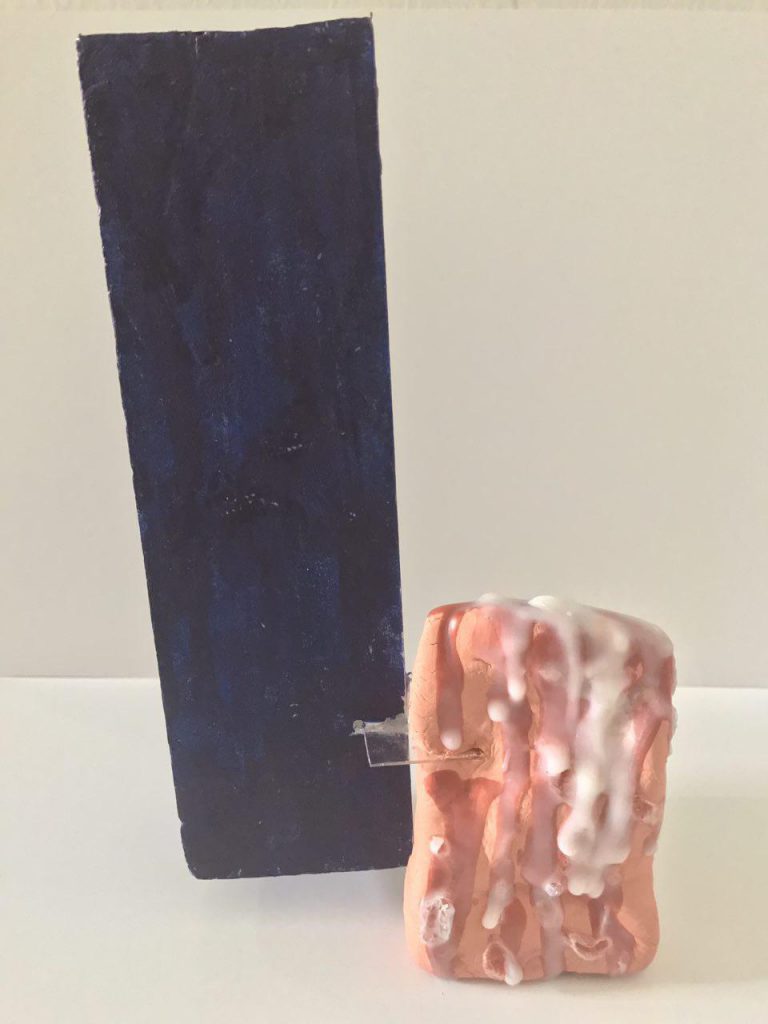 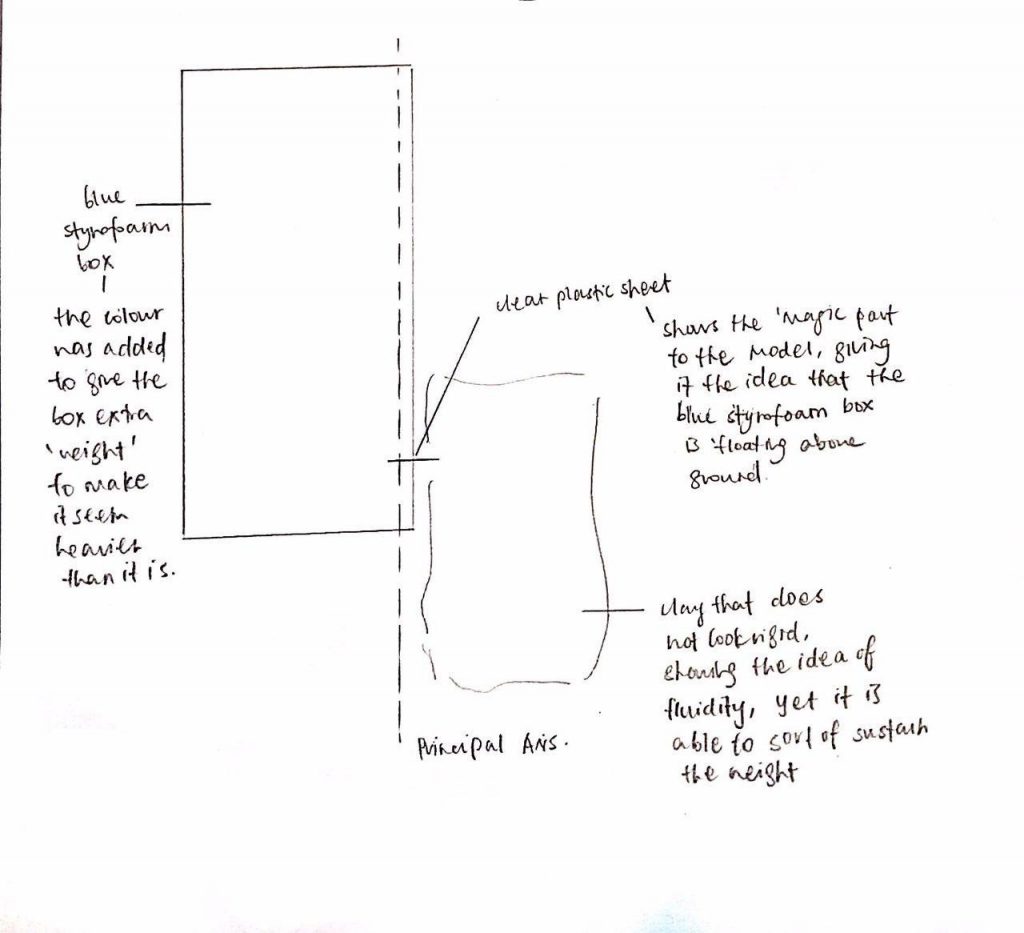 The idea of using the void to bring out the word, Magic, more was inspired by Kazuyo Sejima’s works with her use of voids in her architectures. 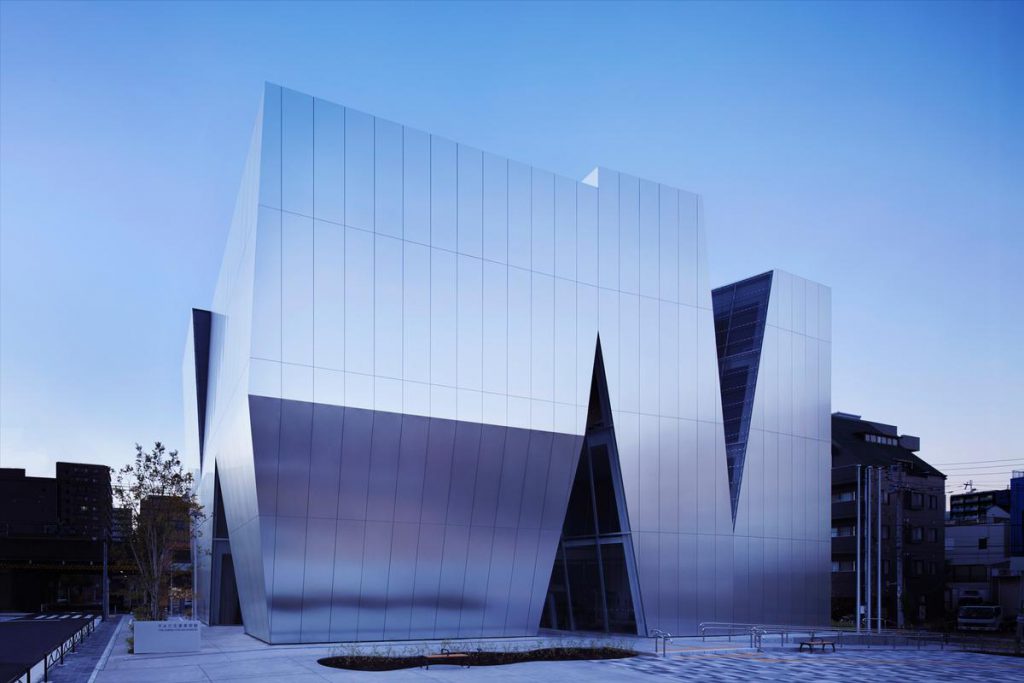 This is The Sumida Hokusai Museum done by architect Kazuyo Sejima. Although the voids in this particular architecture is not of main focus but the material, I thought her use of voids brings something distinct to this building.

Something similar is this piece also by Kazuyo Sejima, the voids used in the bottom left and top left of the building gave it a unique character that I wanted to try on for my model. 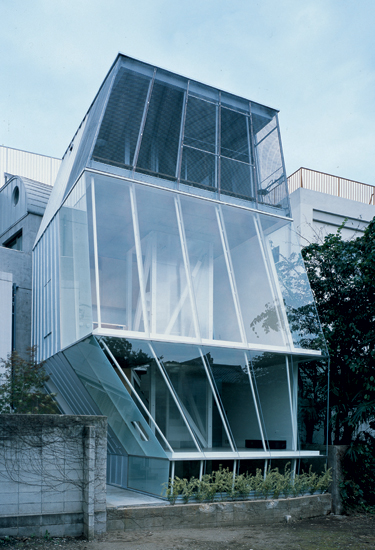 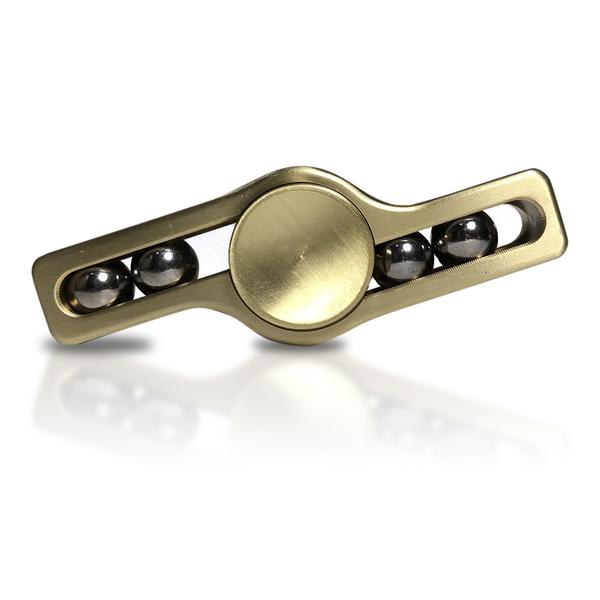 Not just with its similar structures, I thought the idea of The Balancing Trio also works with the fidget spinner. 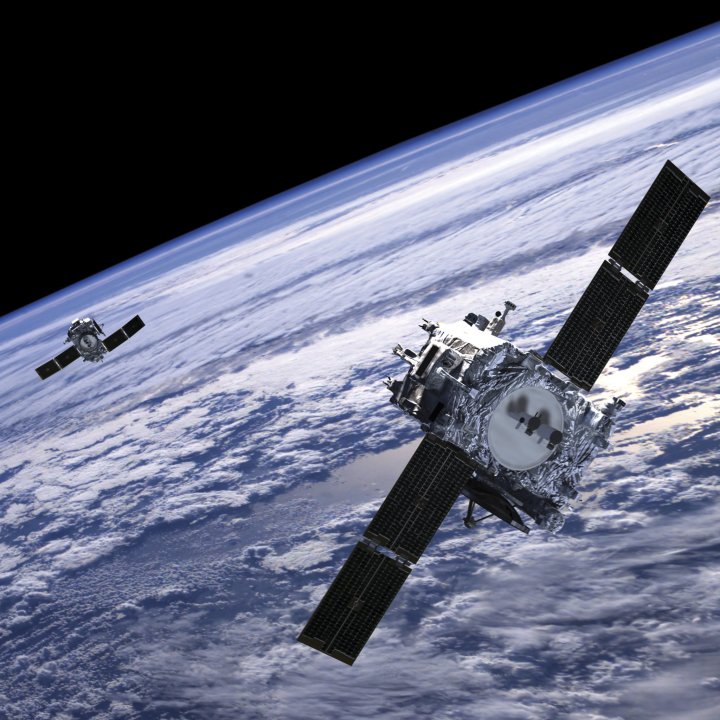 With the two flaps that sticks out at the side of The Balancing Trio, I thought this structure can be used to build a similar looking satellite as well.

Overall, I enjoyed working and experimenting with what I can do with the blue foams and other materials to create the models. At first, I struggled with trying to see the magic in my models, however, with the help of research and experimenting with the different ideas I can work with, I found it easier to tackle this project. Having first hand experience with construction my model, I thought it was rather exciting and seeing my concept turning into concrete structures gave me a sense of satisfaction. I hope to produce higher quality structures in the upcoming 3D projects, I think that is one thing I need to work on. While constructing The Magical (P/T)ower, I glued the plastic sheets together, however, I felt that with improper planning, the glue got a little messier than I thought it would be and had a lot to clean. However, I thought that my experimentations with initially the boxes then with styrofoam really helped be to better construct my final models. 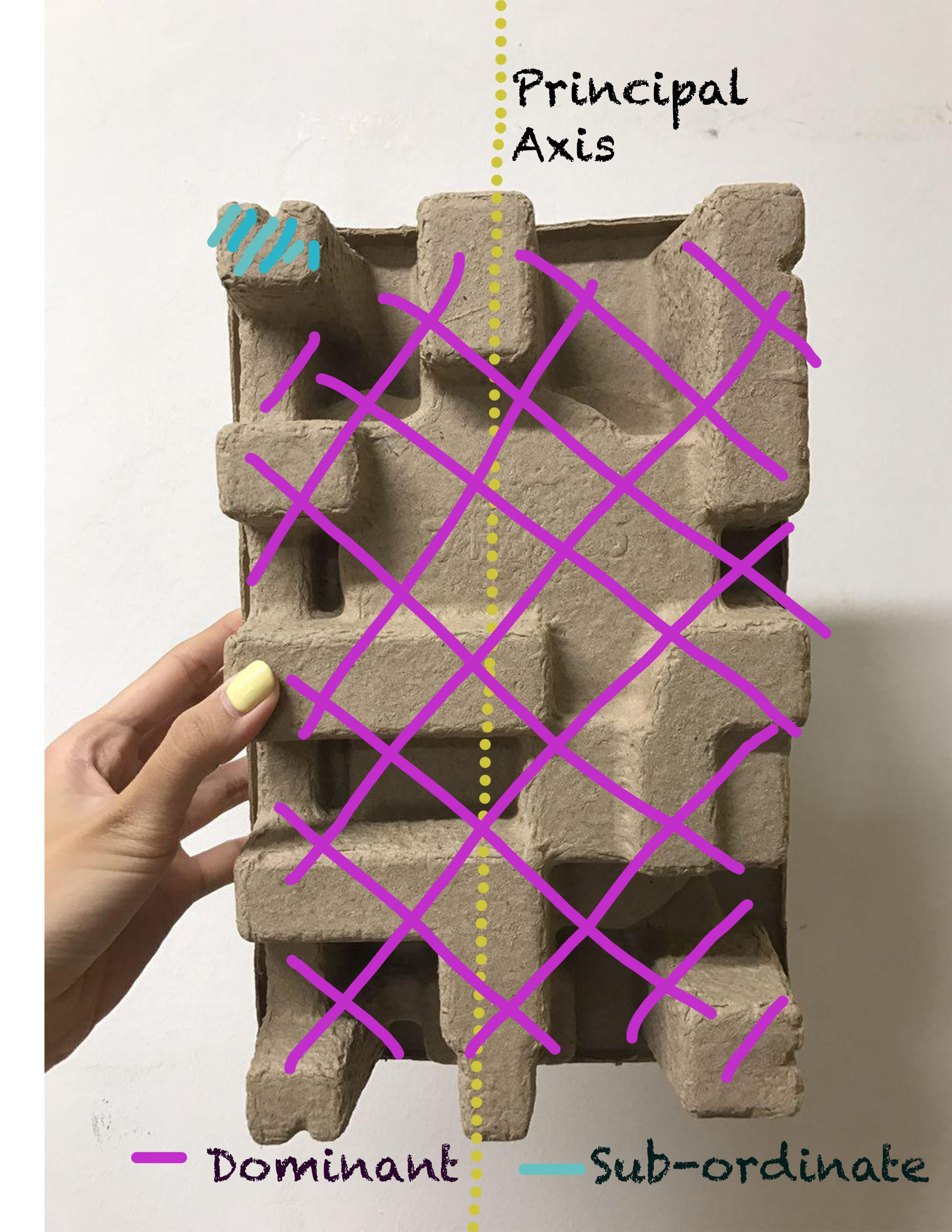 For our very first 3D foundation lesson, we were told to bring an object that we found 3-dimensionally interesting..

2D Sketch Analysis of the Object I find 3-Dimensionally Interesting

The 3-dimentionally interesting thing that I brought to class was the cupboard that was used to secure my router and the wires.

Why I find it 3-dimensionally interesting?

-made up of cubes, cuboids, and many rectilinear lines 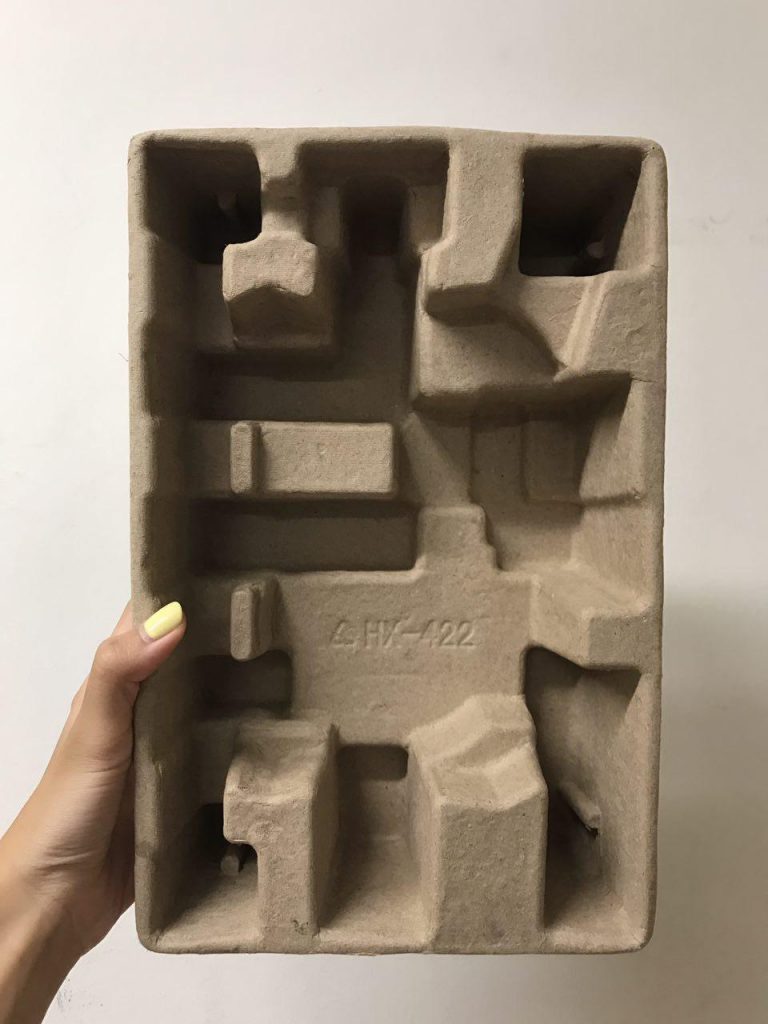 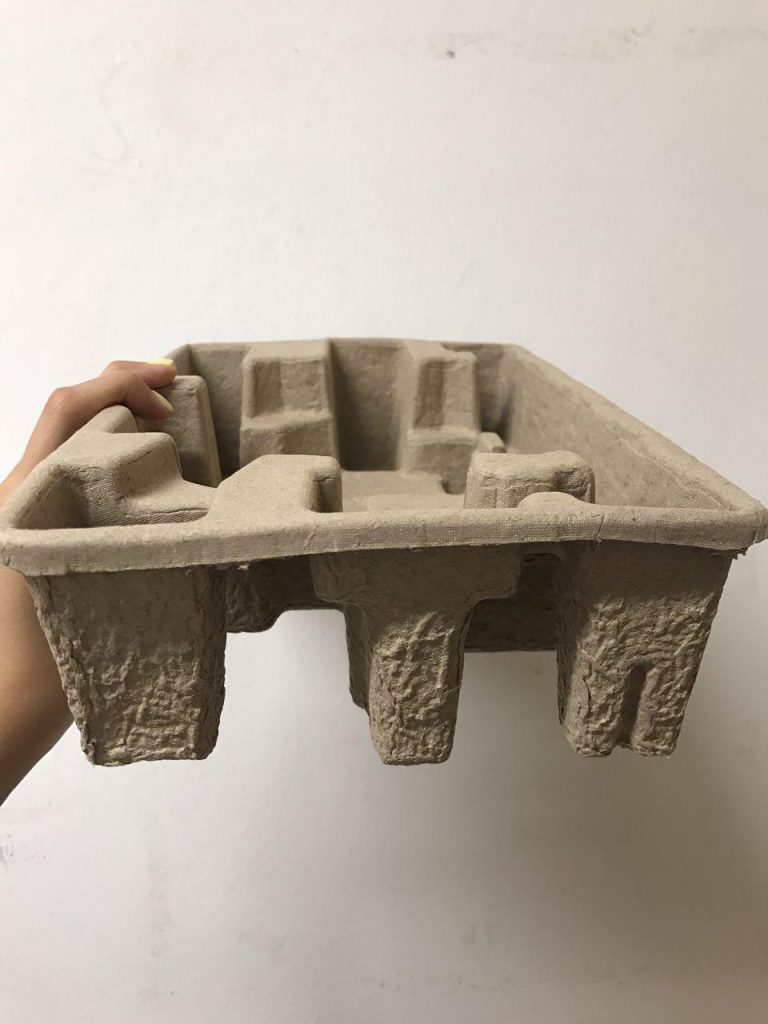 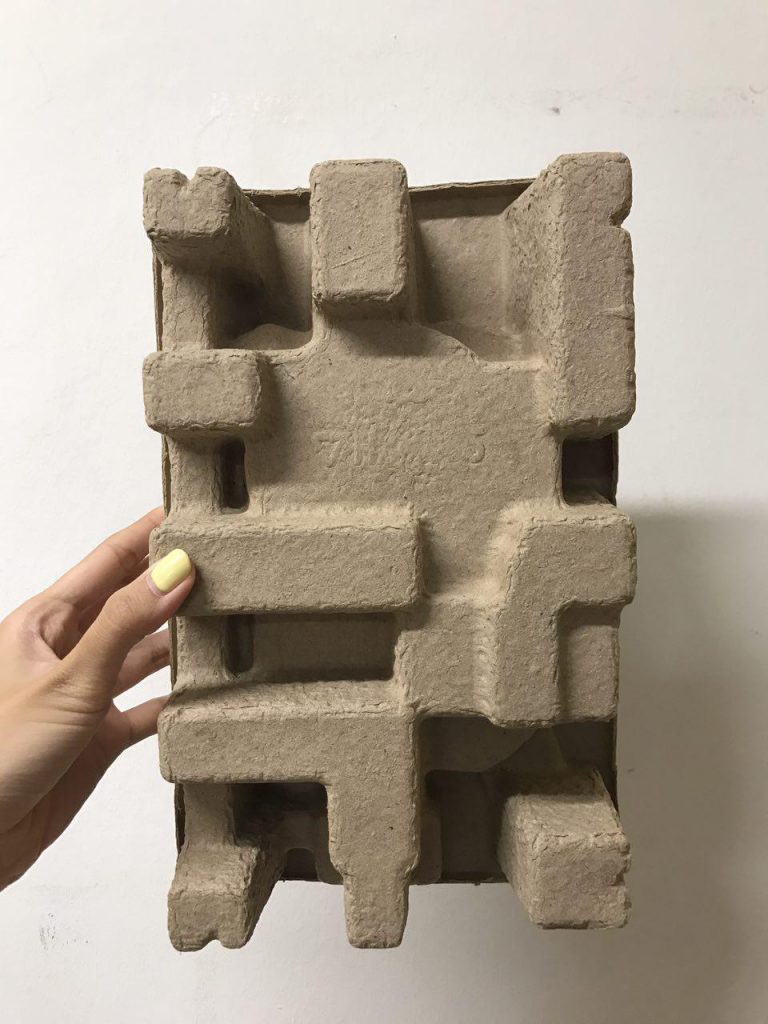 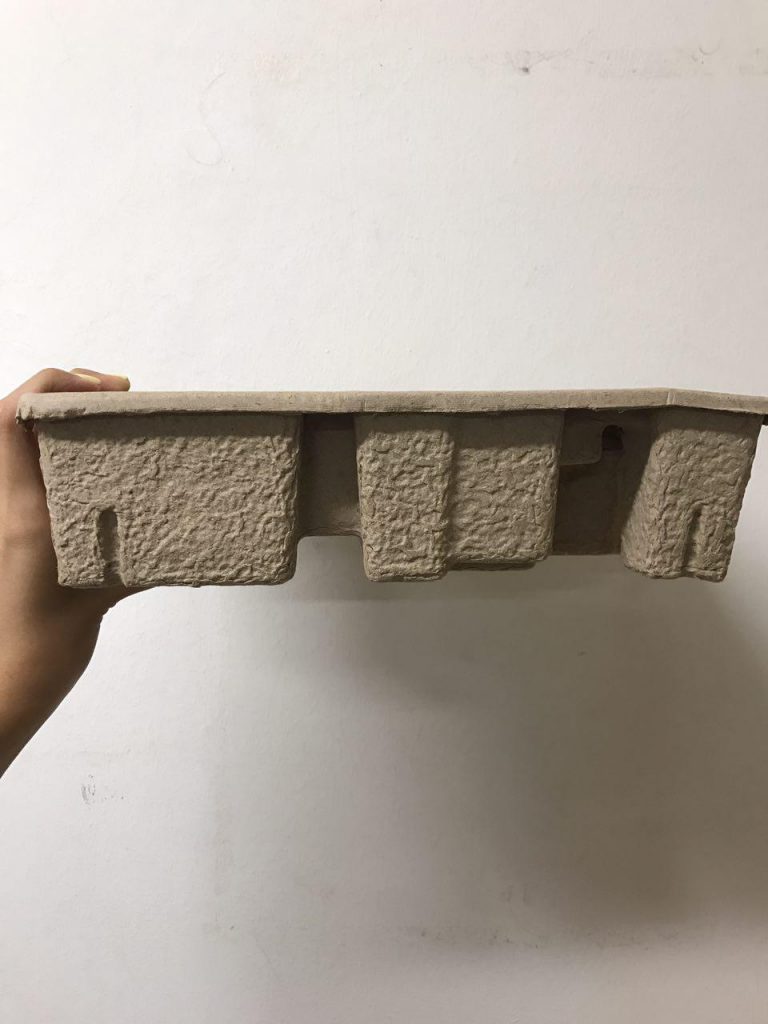 My 2D Sketch Analysis of the Router Cupboard 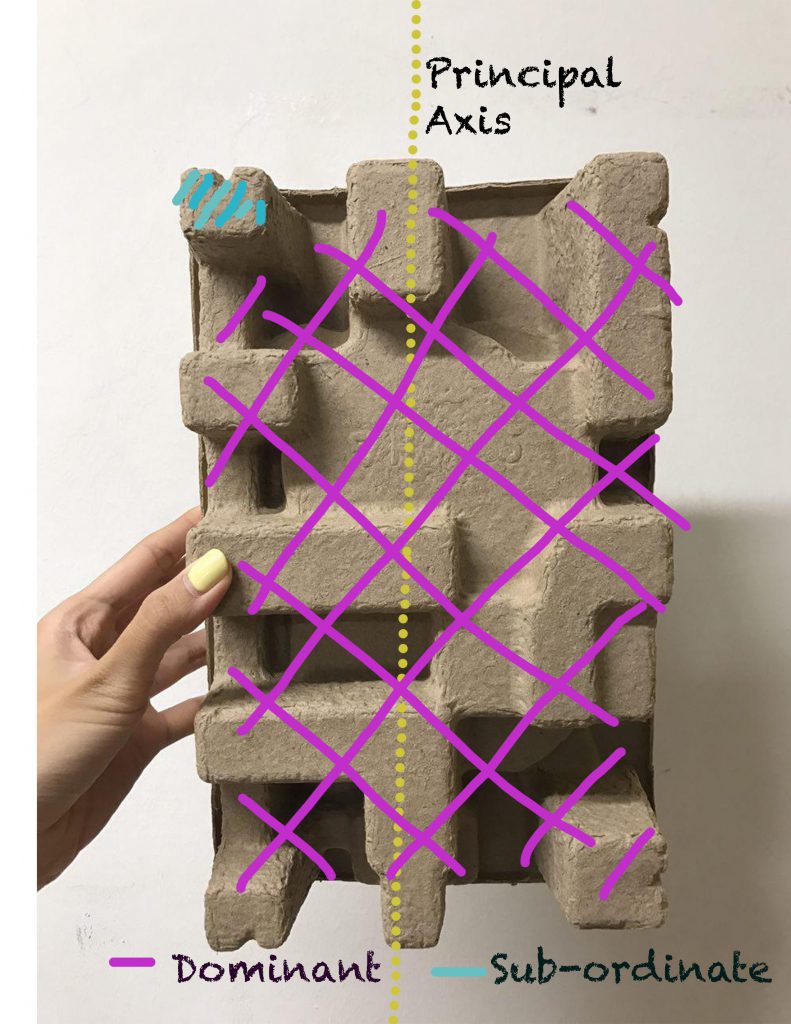 The word I got was MAGIC.

I thought this topic was something that I can freely work on as there are no restrictions to it by the word itself. However, I thought I expand on the word, Magic, as well as incorporate some key terms I have learnt in class. (i.e Rule of third, negative spaces vs positive masses, symmetrical vs asymmetrical, cluster of similar volumes or contrasting volumes, etc)

Expanding on the term, MAGIC

Magic to me is something that cannot be explained, illogical to the human mind. I thought for my first 3D sketch model, I can focus on the phrase “defying gravity” 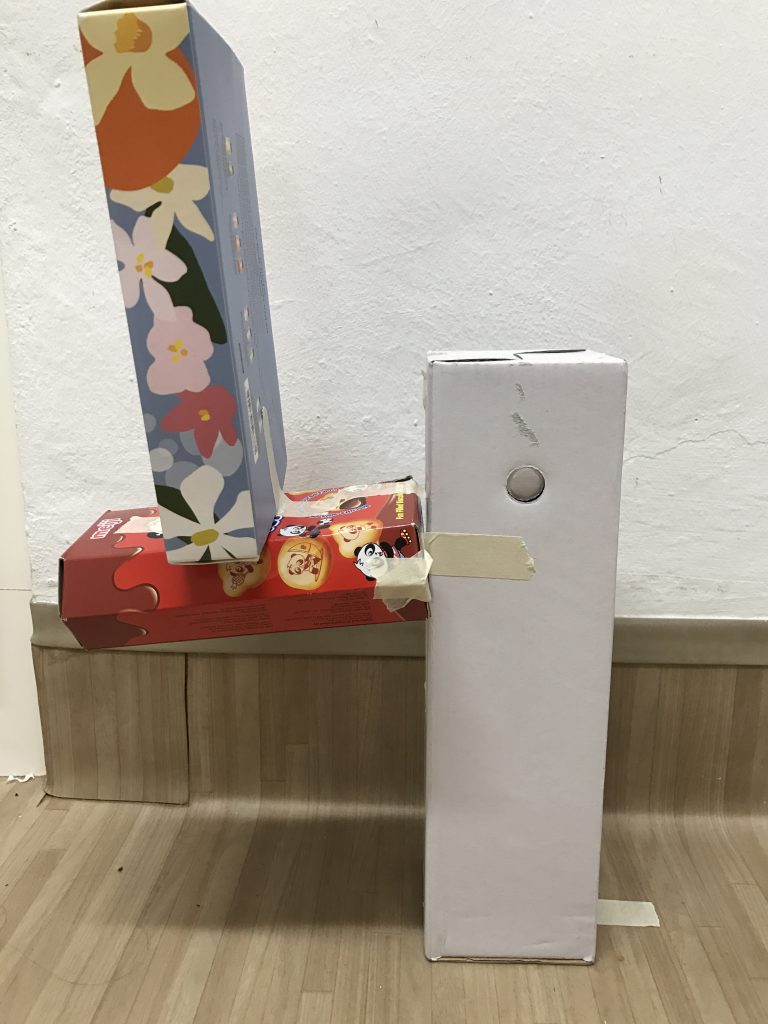 Magic can also be something illogical created by illusion of balance. 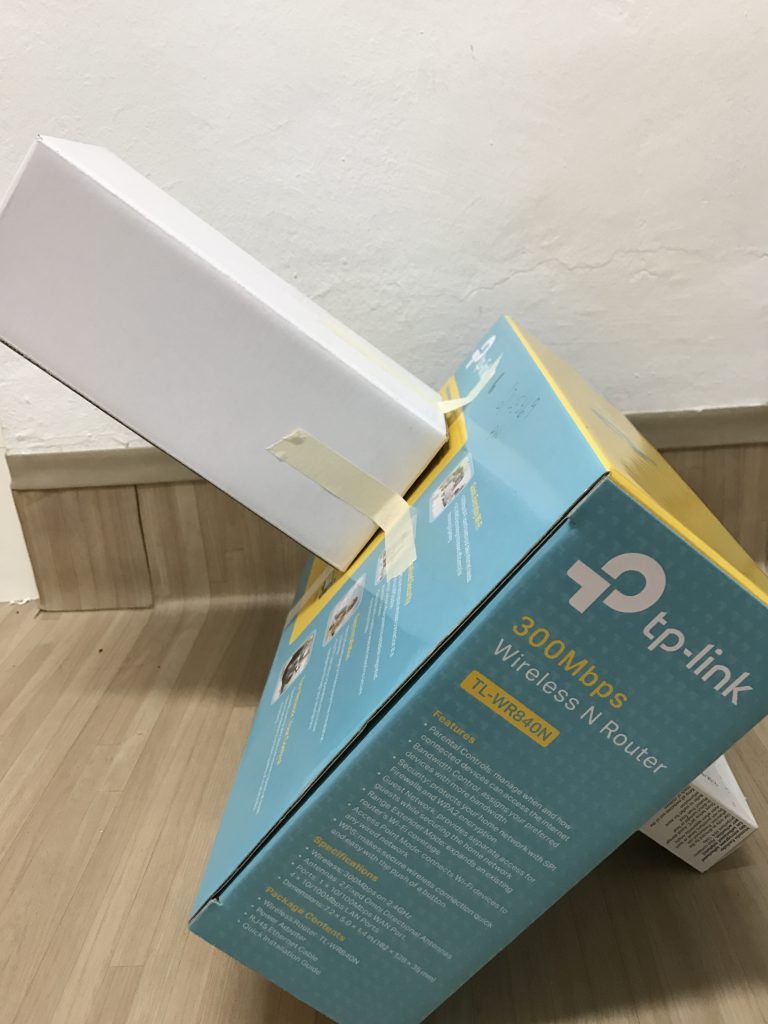 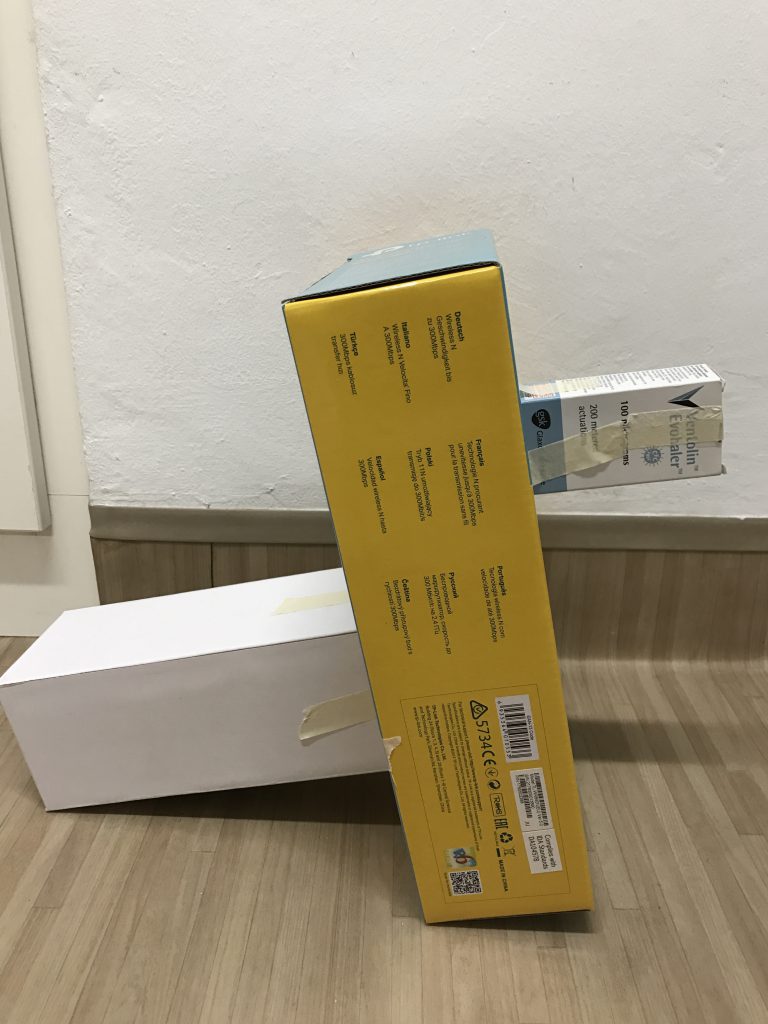 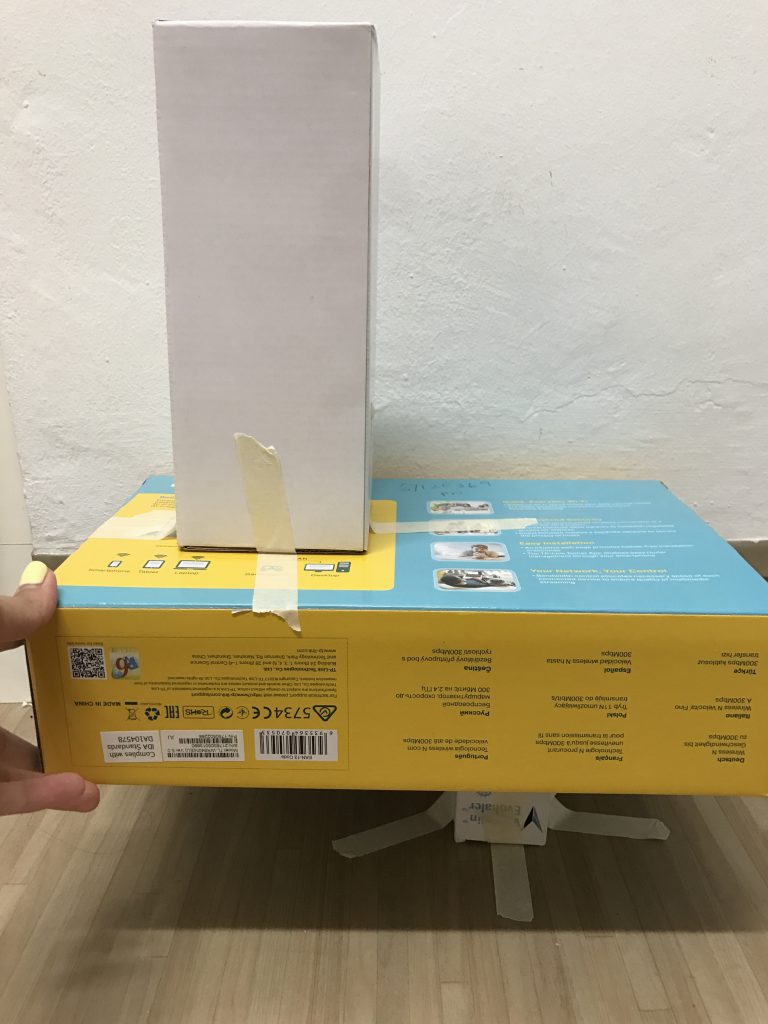 Hope you have enjoyed viewing and exploring the two magical models i have created!