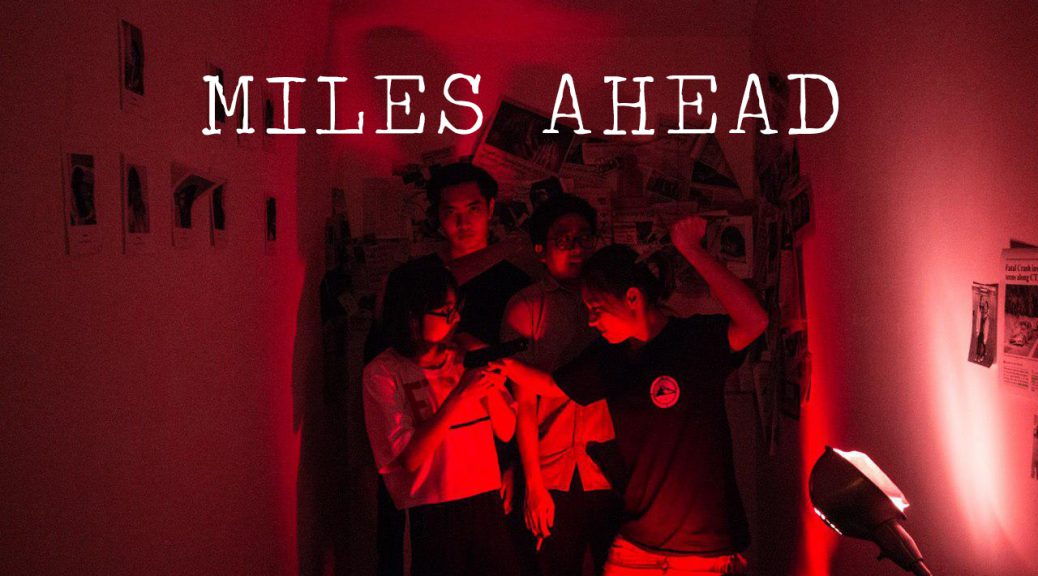 I was part of the team as the cinematographer, a term I haven’t heard before in my life before this project commenced. I was tasked to curate the styles and the looks of the shots, which meant I had to work closely with Hui En to design the looks of the set.

I also  ran through the talent and director what kind of gestures or bodily movements I wanted the talent to show, to convey subtle messages.

I will begin with the idealisation of the installation, before we go into the execution. 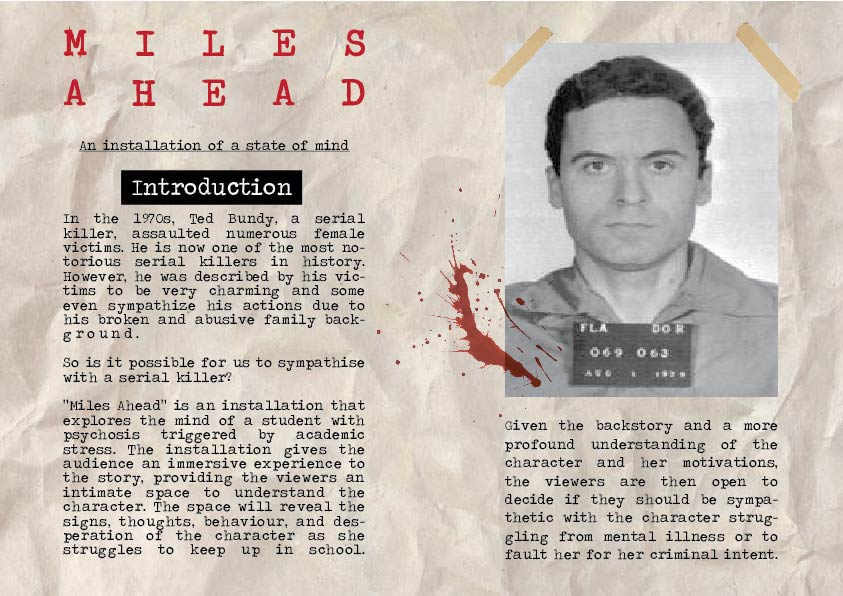 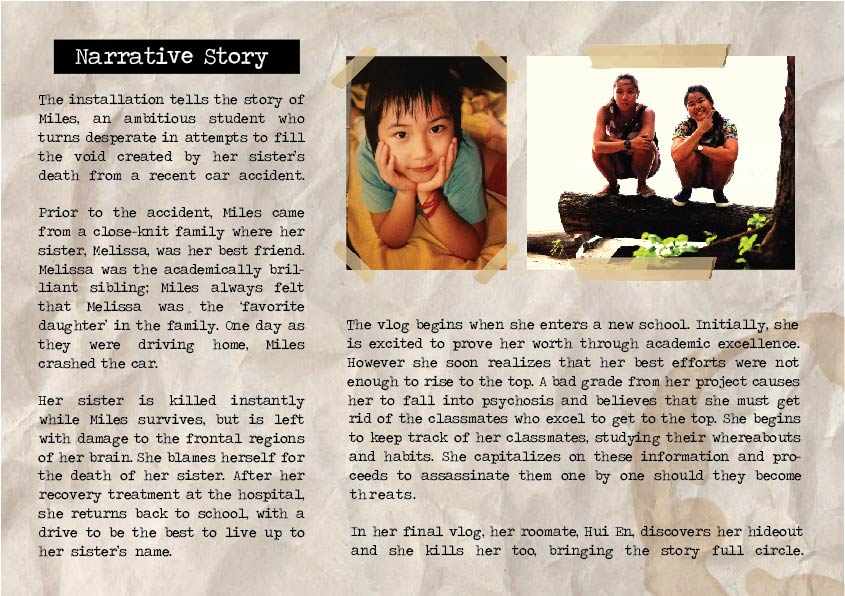 Driven by the concept of being in the mind of a serial killer and their motives, we begin to explore what ways we could make this installation intimate for our audience as well as provide them with a sense of realism.

Character development was left to Hannah, while Hui En and I looked at ways to make the sets more realistic.

I started to research on shows which involved serial killers and one of the biggest influences in some of my shots was from Dexter. 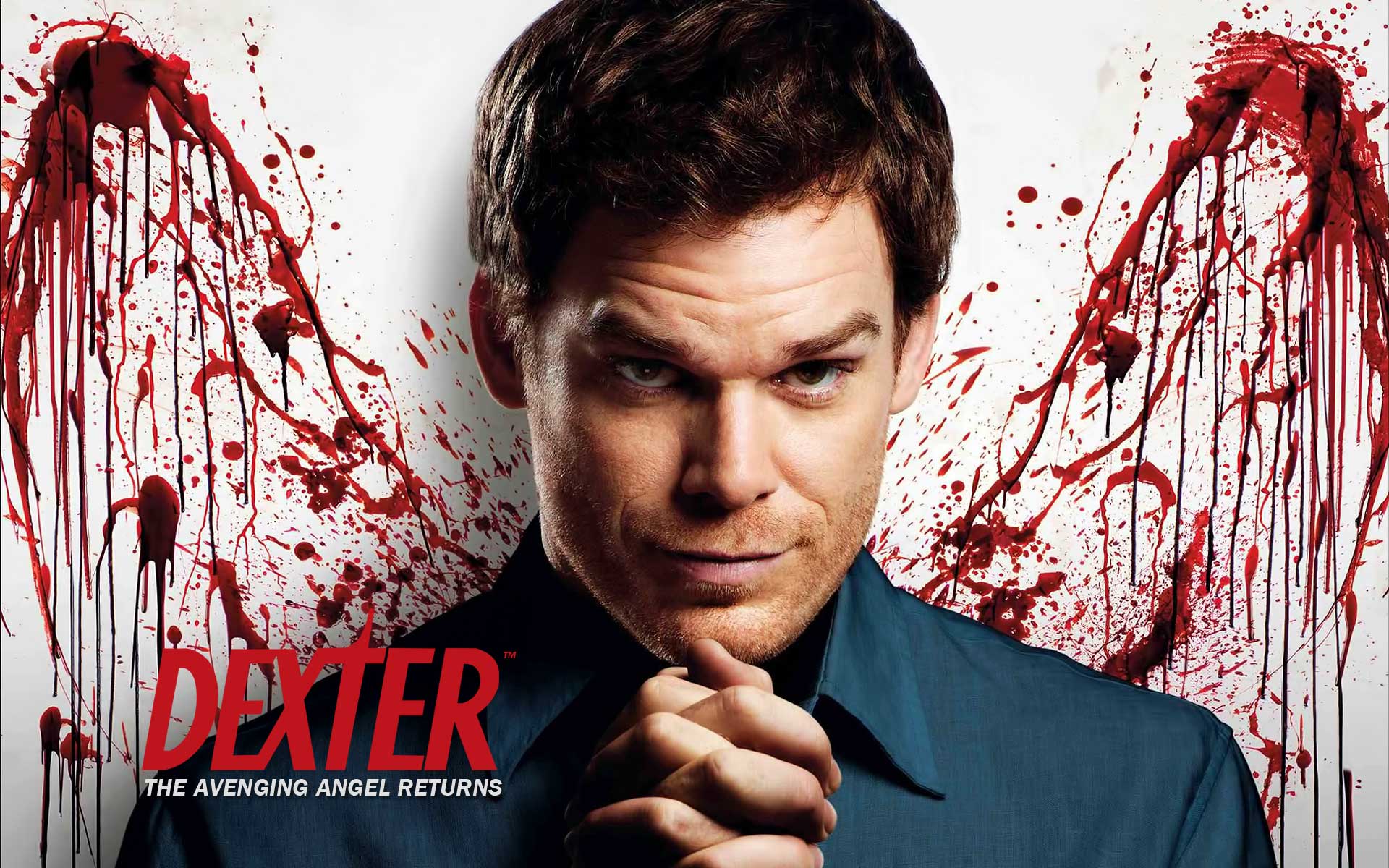 Dexter is a show about a serial killer named Dexter who goes around killing other serial killers (funny how that works, huh).

As we had to recreate scenes of Hannah killing her targets, I went to watch scenes of how Dexter hunts for his prey and eventually kills them.

The killing scene happens around the 3 minute mark but in the video you notice how Dexter directly engages his prey in a hostile manner. For our video, we did this in a more subtle manner, luring the target to a more secluded area.

Dexter is iconic for being meticulous in the execution of his victims, planning every step from stalking, to killing and eventually disposing of the body. This is to make sure that he does not get caught. His ‘kill room’ is always lined with plastic to ensure that he does not leave any trace of evidence behind. 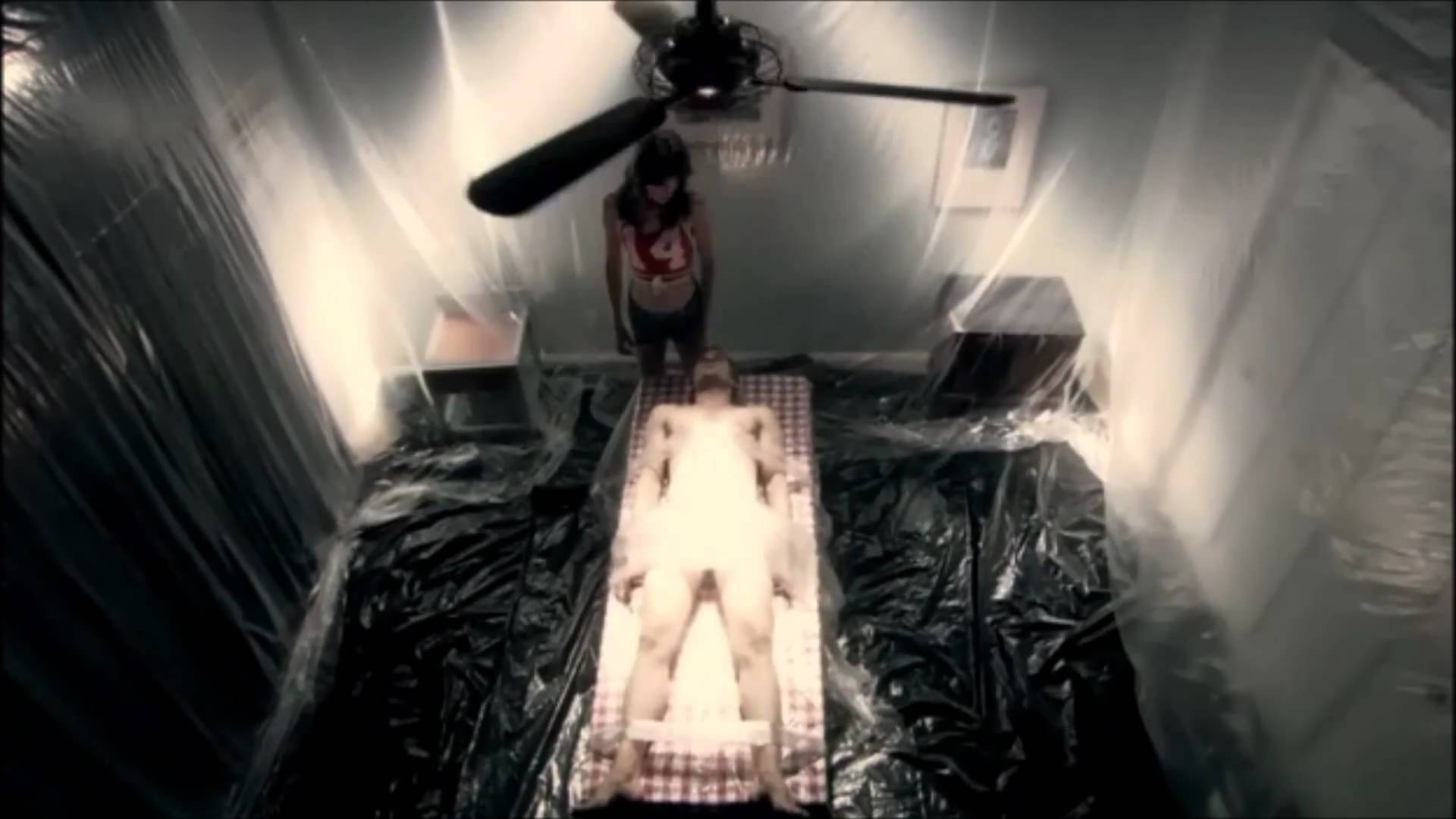 In this scene of our installation, Hannah uses a rope to kill her victim, similar to how Dexter did it. However as Hannah is smaller as compared to the victim, she has to put up a considerable amount of fight to take him down.

We also had to make the shot believable, thus, I had to ask Deryck (our prey) to slam Hannah against the wall to show that he tries to put up a fight.

The shots cycle between the room and the corridor to capture the thought of having such a sinister even happening in such close proximity to us.

In the final scene you can also see that I lined the table with plastic, similar to how Dexter does it before he dismembers his victim to dispose of them. Although the amount of plastic we used pales in comparison to what Dexter uses, it shows that Hannah is becoming more proficient and systematic with her killing.

I will now breakdown the first killing scene. This would allow you to identify how much the killing pattern of Hannah has changed.

As you can see, Hannah stabs her victim in this scene which shows her lack of planning as she just used whatever weapon she had which was readily accessible at that point in time.

It was crucial for Hannah to pace back and forth as it shows how nervous she was for this kill, a great contrast from her second kill as she was much more prepared for that.

I also told Hannah to greatly exaggerate the stabbing motion as initially, it was difficult to see that she was holding a knife. I told her to drag her arm out as far as possible to best capture the idea of stabbing.

After killing Shi Min, you can see Hannah frantically peering out the corridor, making sure that no one heard her awful deed. Again, a huge difference from the calm Hannah which walked out of the initial room as though nothing had happened. 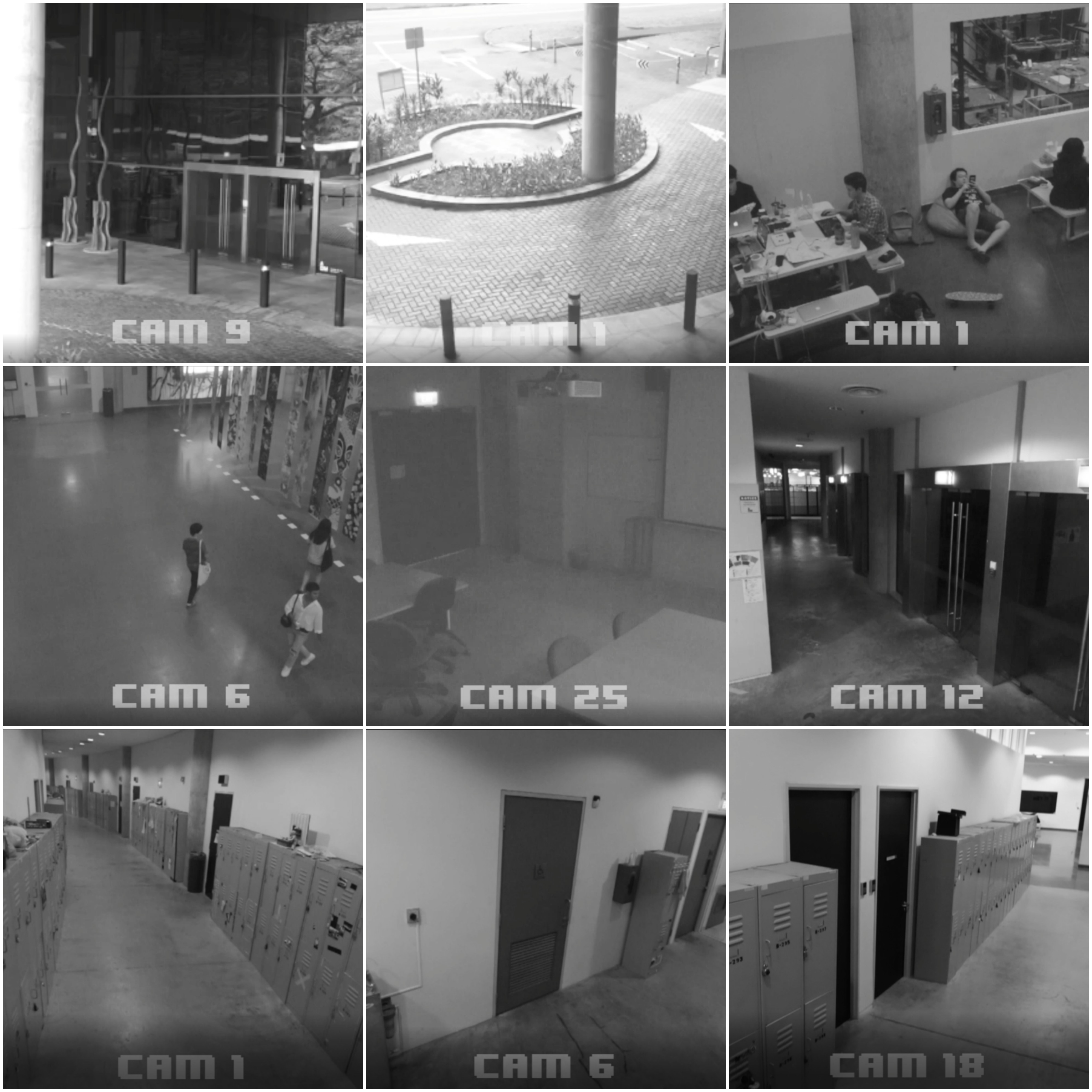 The CCTV shots progressively get darker and less dynamic in terms of people as we try to show her state of mind deteriorating from a cheery and outgoing person to one which is more isolated, thus the darker settings.

The scenes for the day time vlogs were fairly straightforward as there was adequate lighting in her room.

One thing I wanted Hannah to do was to constantly play with her Swiss Army Knife in the vlogs. This would be a foreshadowing to an event crucial to the story.

For the night scenes however, I had to recreate the lighting in the room to make it believable. For starters, we placed the table lamp as far back as possible and we used a high quality light diffuser (aka toilet paper) to ensure that Hannah’s face would not be too blown out during the takes. 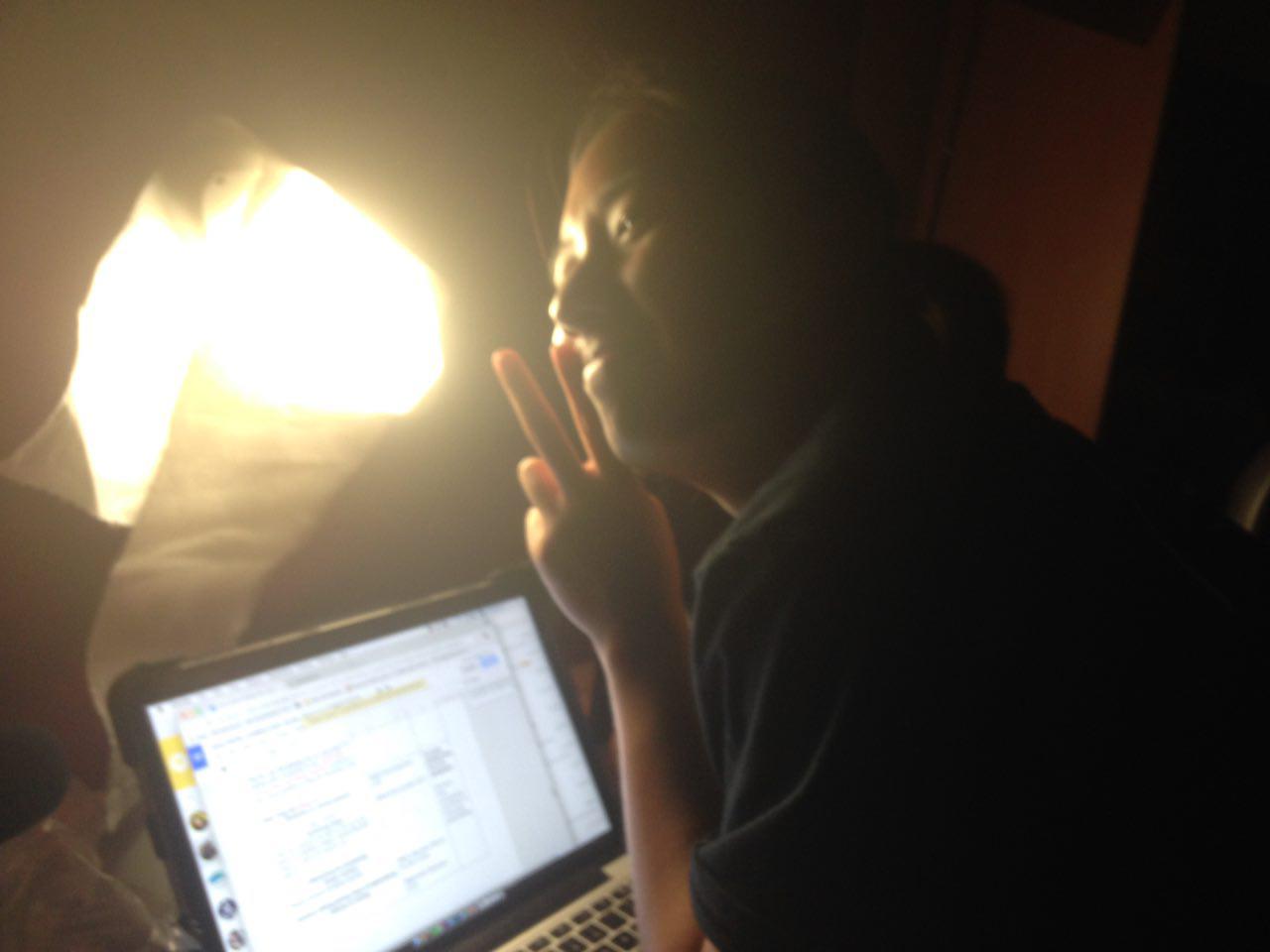 This is the result: 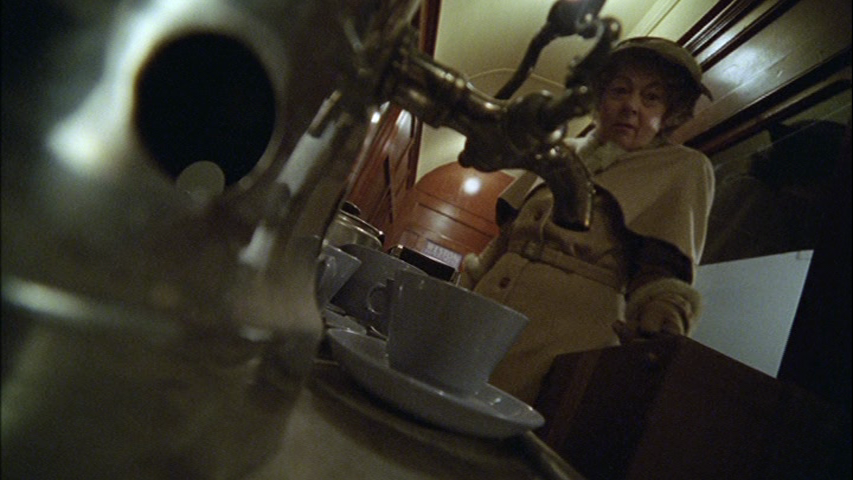 We wanted to experiment with using canted shots to show her slowly slipping into her disorientated state of mind. 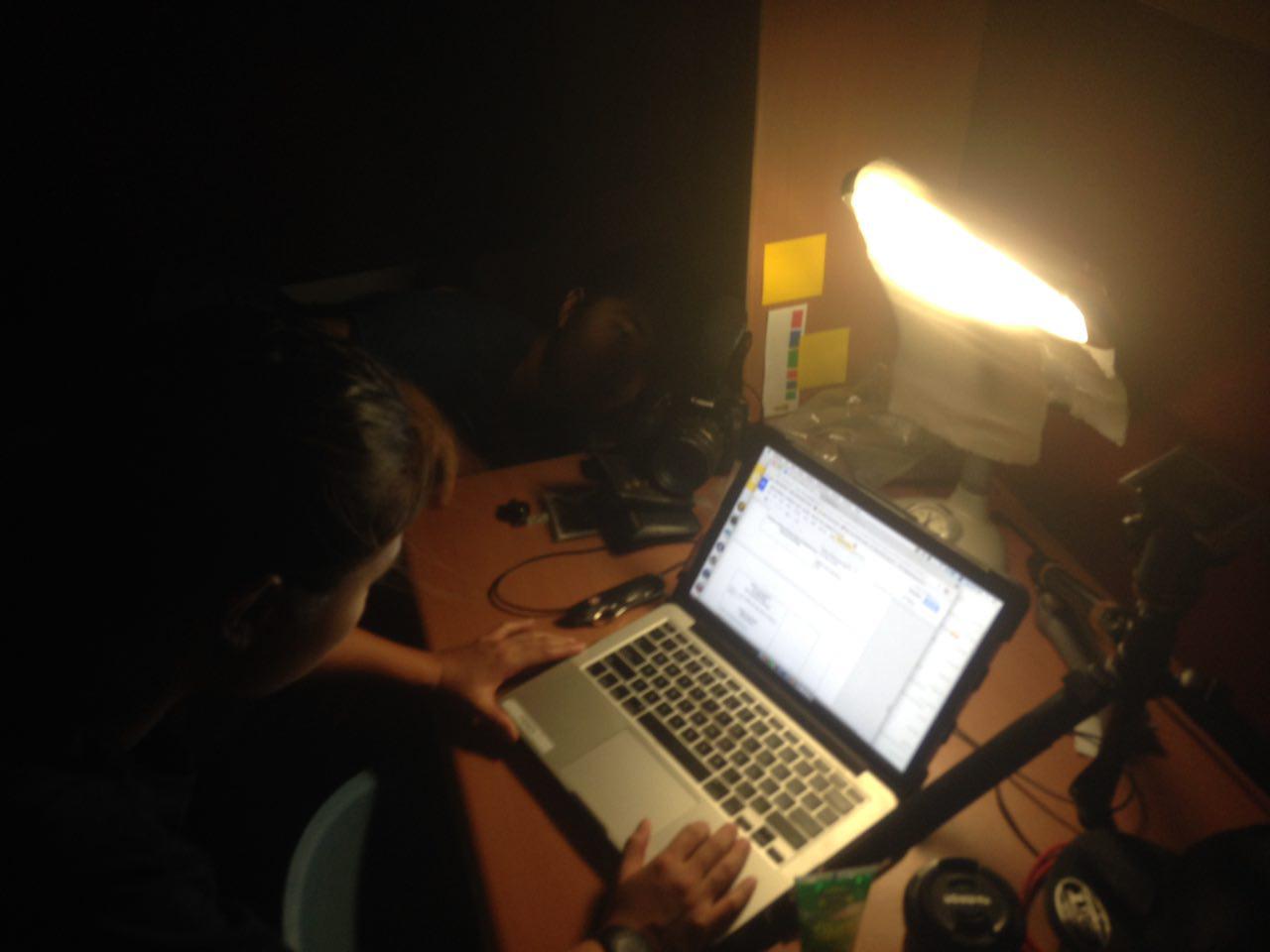 If you look closely, you can see me peaking at the edge of the table trying to get the perfect shot. We used a high quality tripod (aka our wallets) to get the camera in angle for the shot.

This take was a extremely tricky as we had to coordinate many parts.

Initially, what we did to try and capture the shots was by having Hannah enter the room and hand me the camera to get it in place.

However, we could not coordinate it well as it was an awkward position for me to get into, which would result in the shot becoming shakey.

Therefore, we decided to split the sequence into two parts, cutting the scene as she enters the dark room. This gave us ample time to set up the dutch angle shot without all of the shake and distortion.

As this was a pivotal shot showing her spiral into her new state of mind, we wanted this shot to be intimate, only showing the crucial elements. Thus, the only light source in this shot was from the laptop.

Also, all those fiddling with the Swiss Army Knife is explained as she uses it for her first kill.

Next, we move on to more complex lighting situations.

To start off, we have the scene where she first finds her new hideout.

I wanted both the light source and the camera to be below Hannah as it would show that she hasn’t moved in any proper furniture to place the light and camera on anything.

I also made sure to have the tint of red lighting as minimal as possible at the start.

Slowly as the vlogs progress, the red tint subtly becomes stronger, giving the audience a glimpse of how she is becoming more and more sinister with her actions.

The red lighting was not only use for aesthetics as they served an additional narrative. Within the installation, you can find these images of various classmates on sheets of paper. 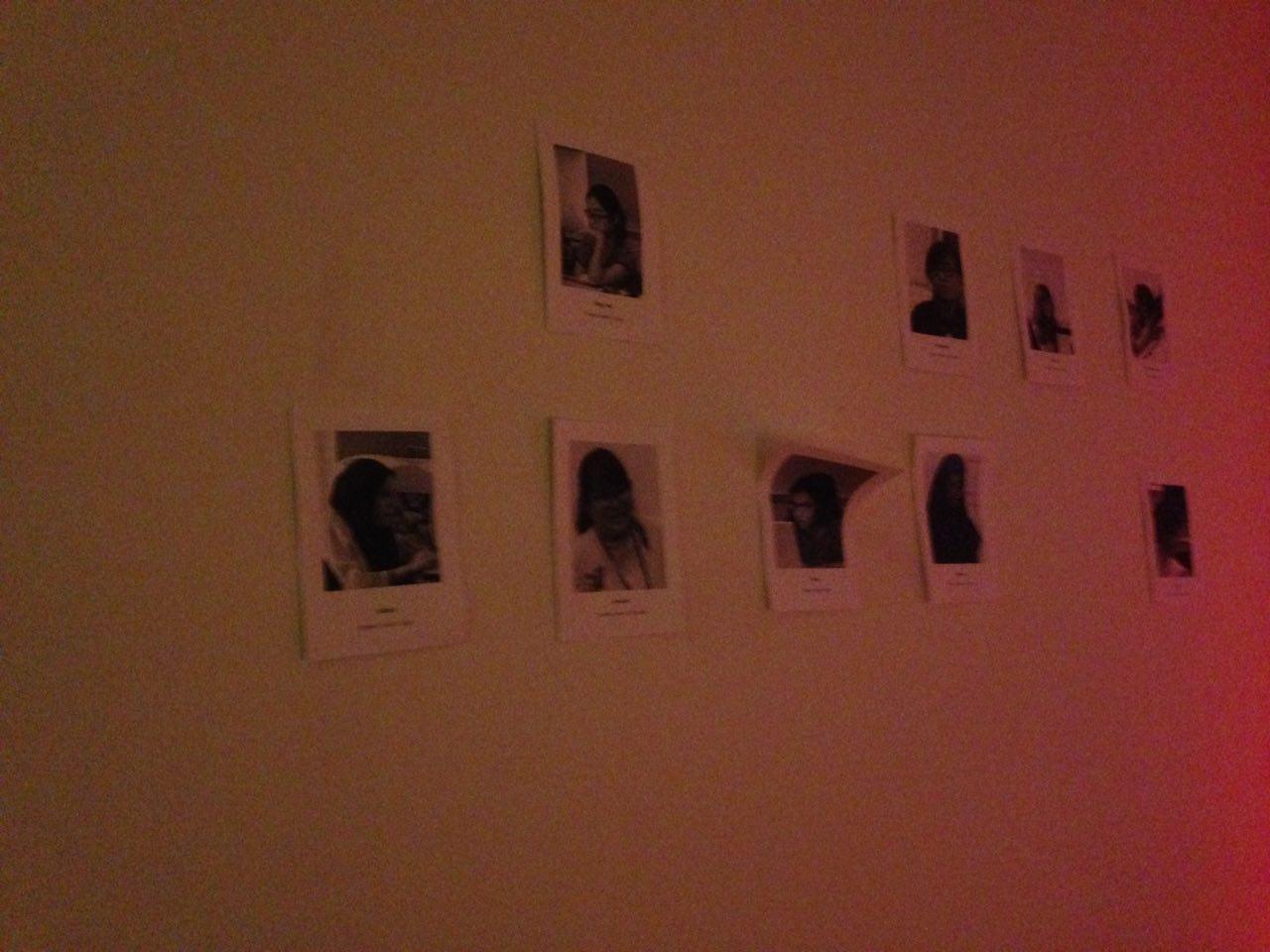 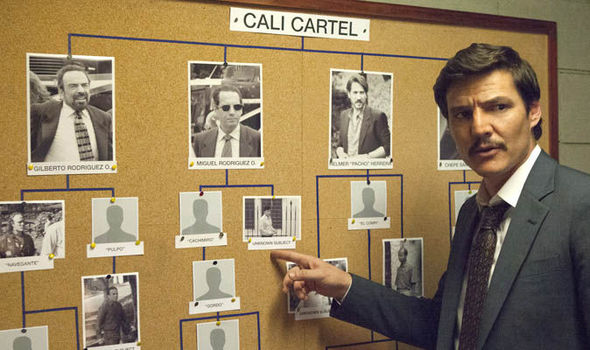 Fine tuning the red lighting. This was the final vlog we had to shoot and as you can see, the red light is at its maximum. 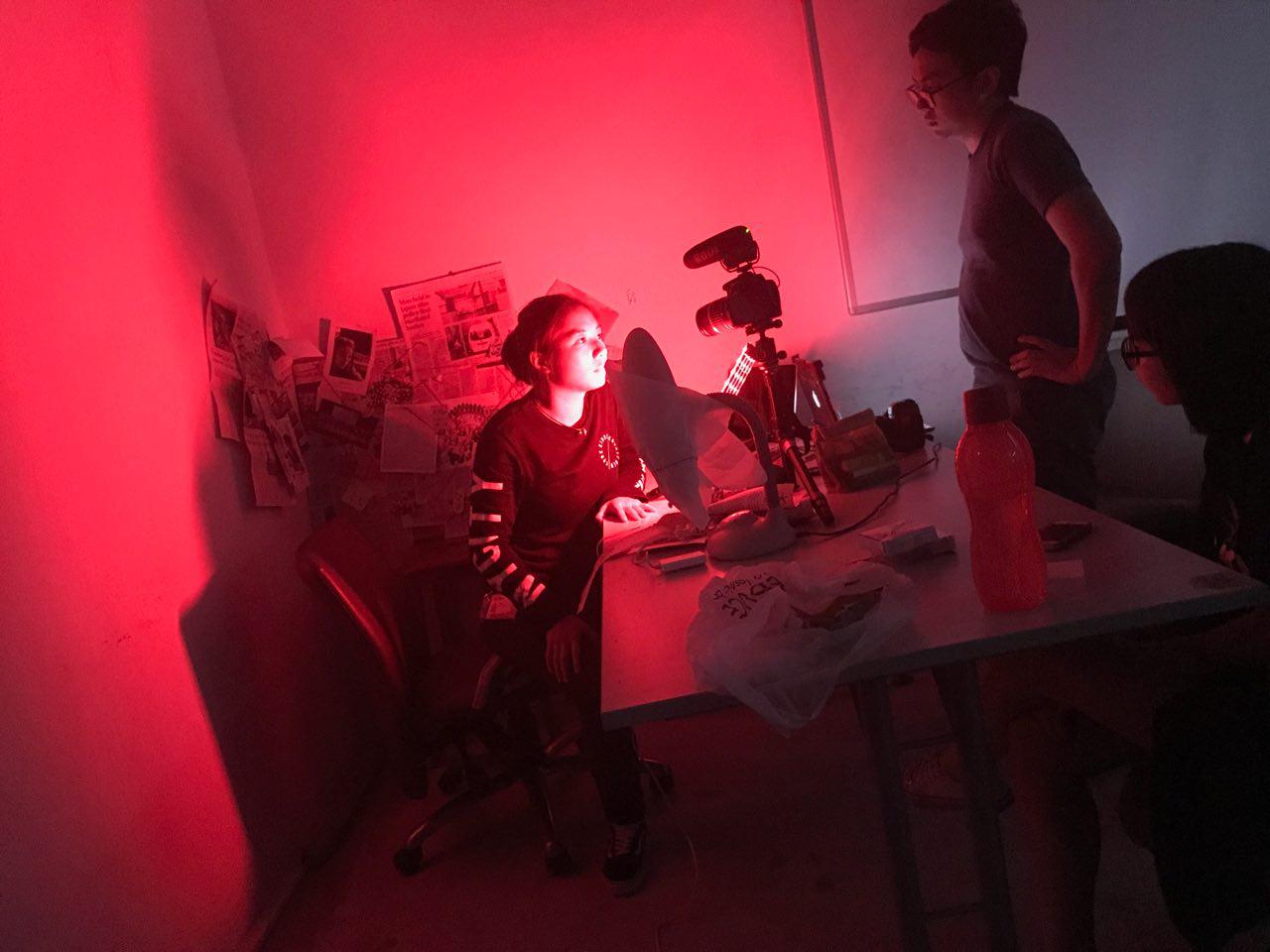 This tethers a little into art direction, but the images posted on the wall were made to seem as though they were developed using a film camera, hence the use of red lighting.

I referenced the style used in Narcos as they were profiling individual drug lords. The black and white images gave a stylized look to the board which was what I wanted to convey.

Towards the end of the vlog, just before Hannah goes to murder Hui En, I told Hannah to ensure that the knife blade reflects the light off the screen as it was difficult for the audience to tell that she was holding a blade.

Here, you can see us in action as we play around with the lighting, finding the best way to capture the intended effect!

On Fendi’s OSS, you can see that he actively documents our shots and behind the scenes! 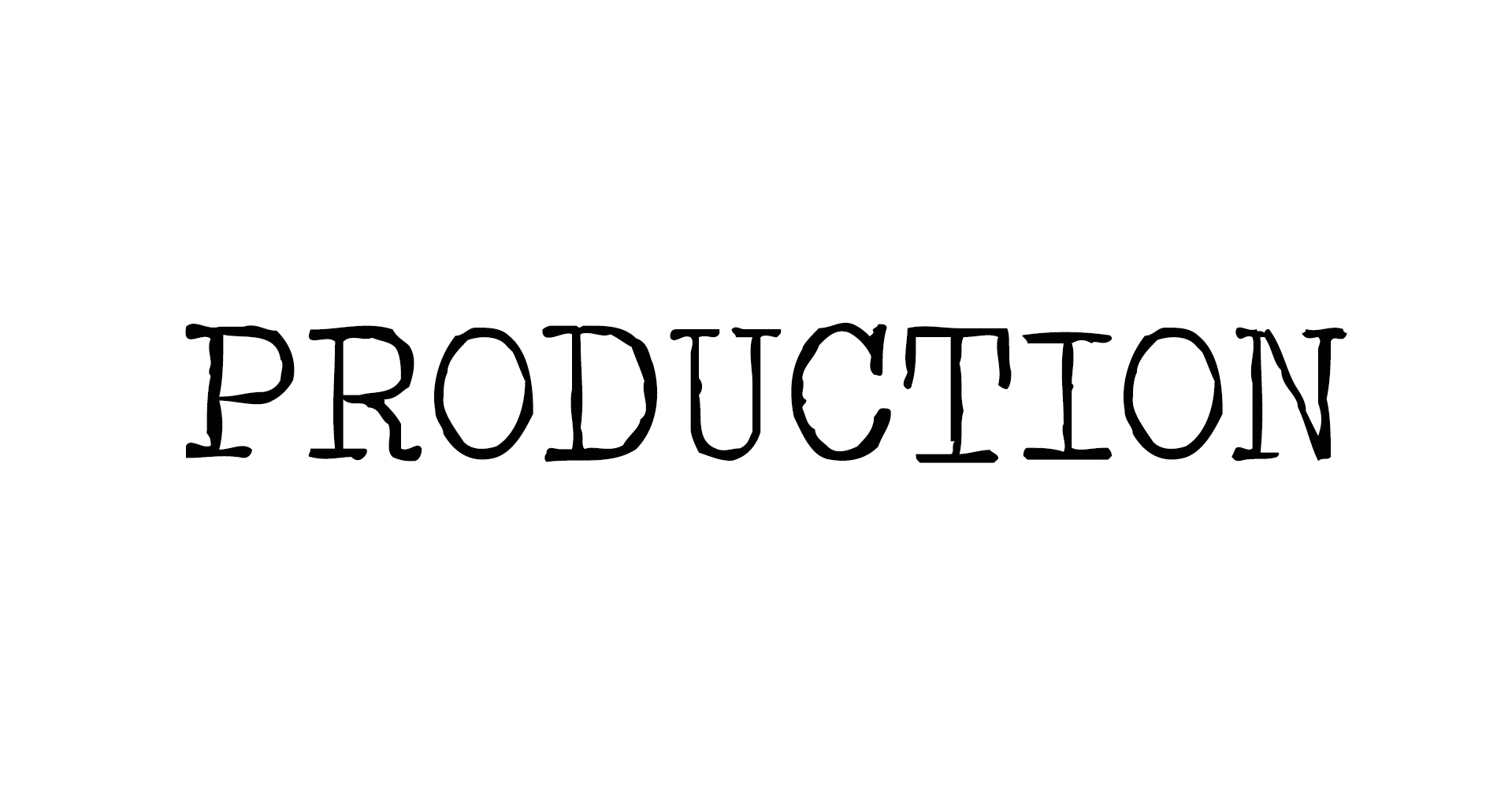 Now let us take a look at what went behind creating the props for all of those shots we took! Hui En and I worked closely to curate look for the conspiracy board!

We began by identifying elements of the mood board we wanted and we started to source for material which helped us with the process.

The materials used can be found on Hui En’s OSS post here:

We made sure to have articles pertaining to different topics such as Car accidents, mental health, articles on university scholarships and bursaries, murder and crime (especially serial killers) and photos of locations.

This was to keep everything in line with the theme as we felt that if we just placed random articles on the board, it would not make sense and it would spoil the immersive sensation of the installation.

The articles also had to work well with one another. Meaning that they could be related to one another. 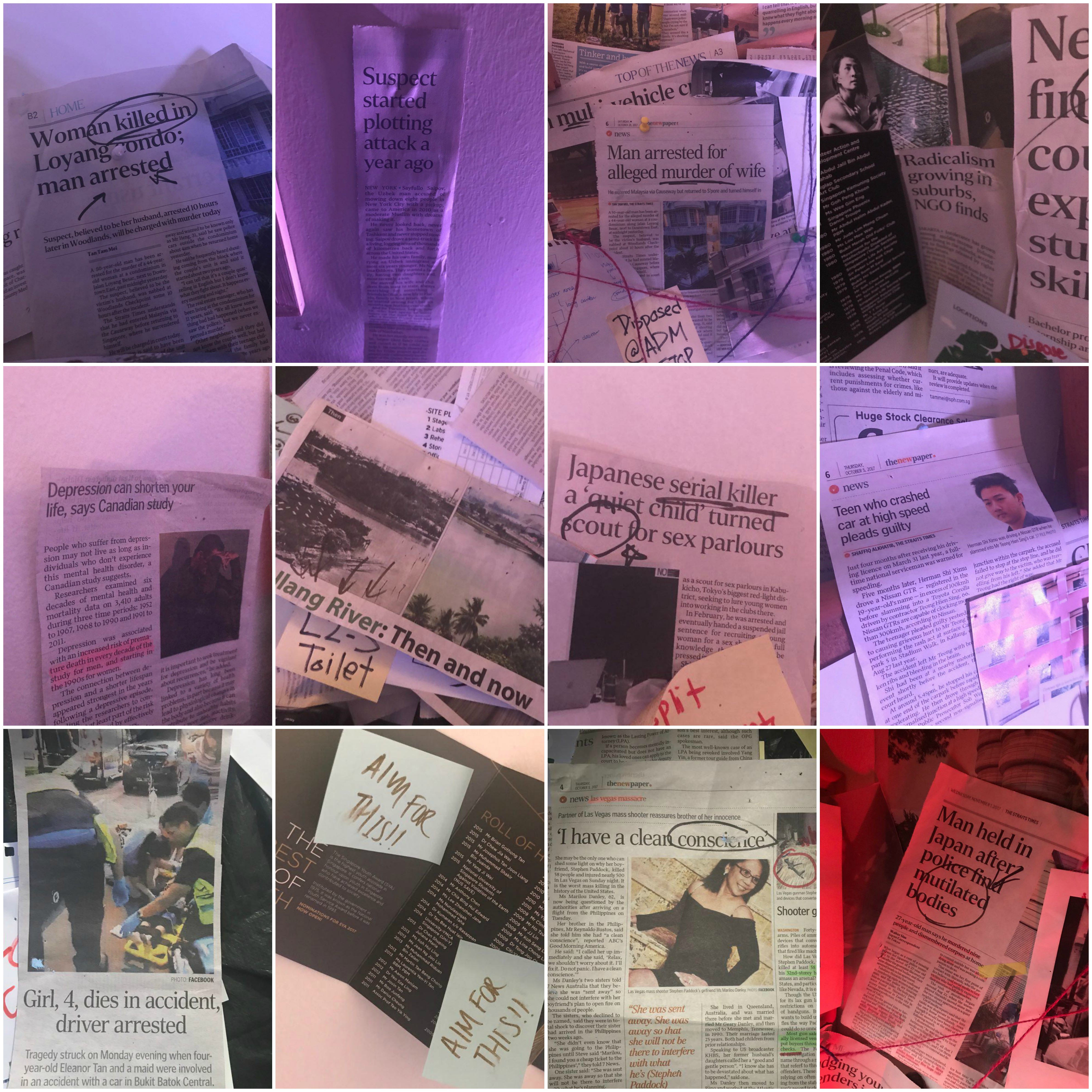 As you can see from a close up below, the two murders are actually linked together. These are some details which people may have missed on the actual day. 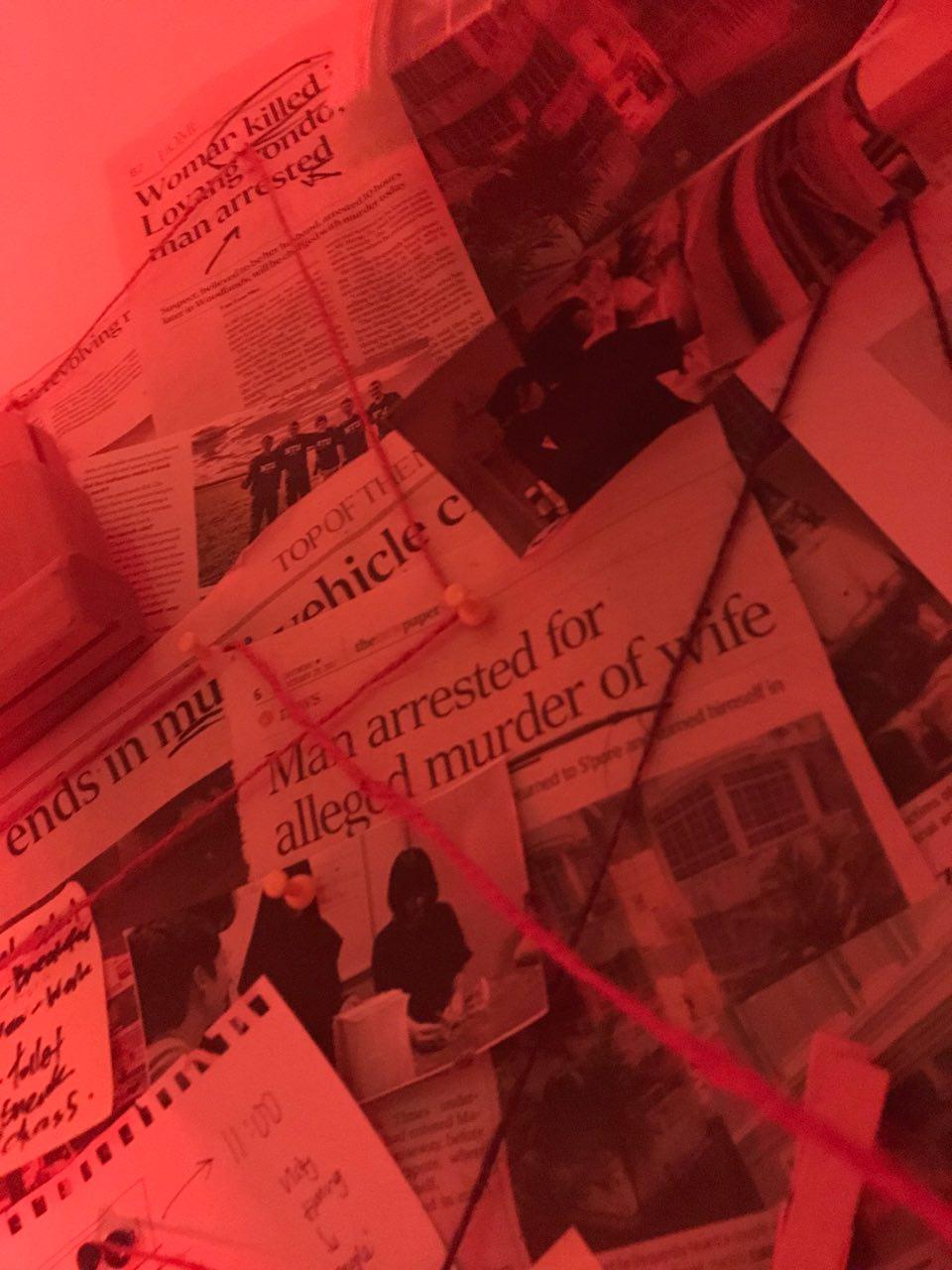 Initially we wanted to film the vlogs in the actual stairwell, however, we realised that recording audio there would be difficult as the place is echo’y and would result in a lot of reverb in the audio.

In hindsight, it was a good idea to film at the computer lab as we ended up spending a good 8 hours putting everything together.

I cannot imagine the discomfort we would have faced if we were filming constantly in the stairwell with a lack of ventilation.

The first mood board we created: 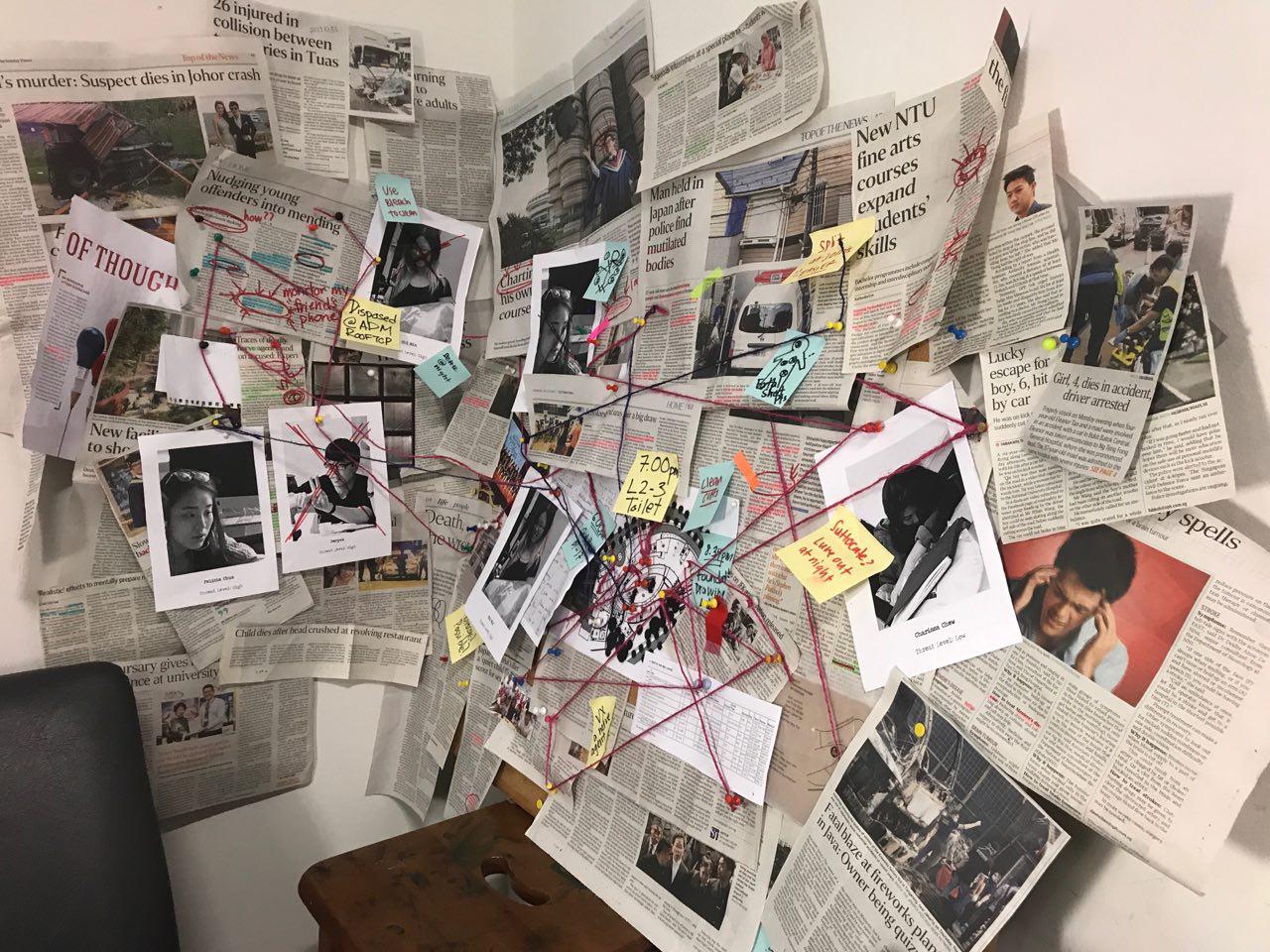 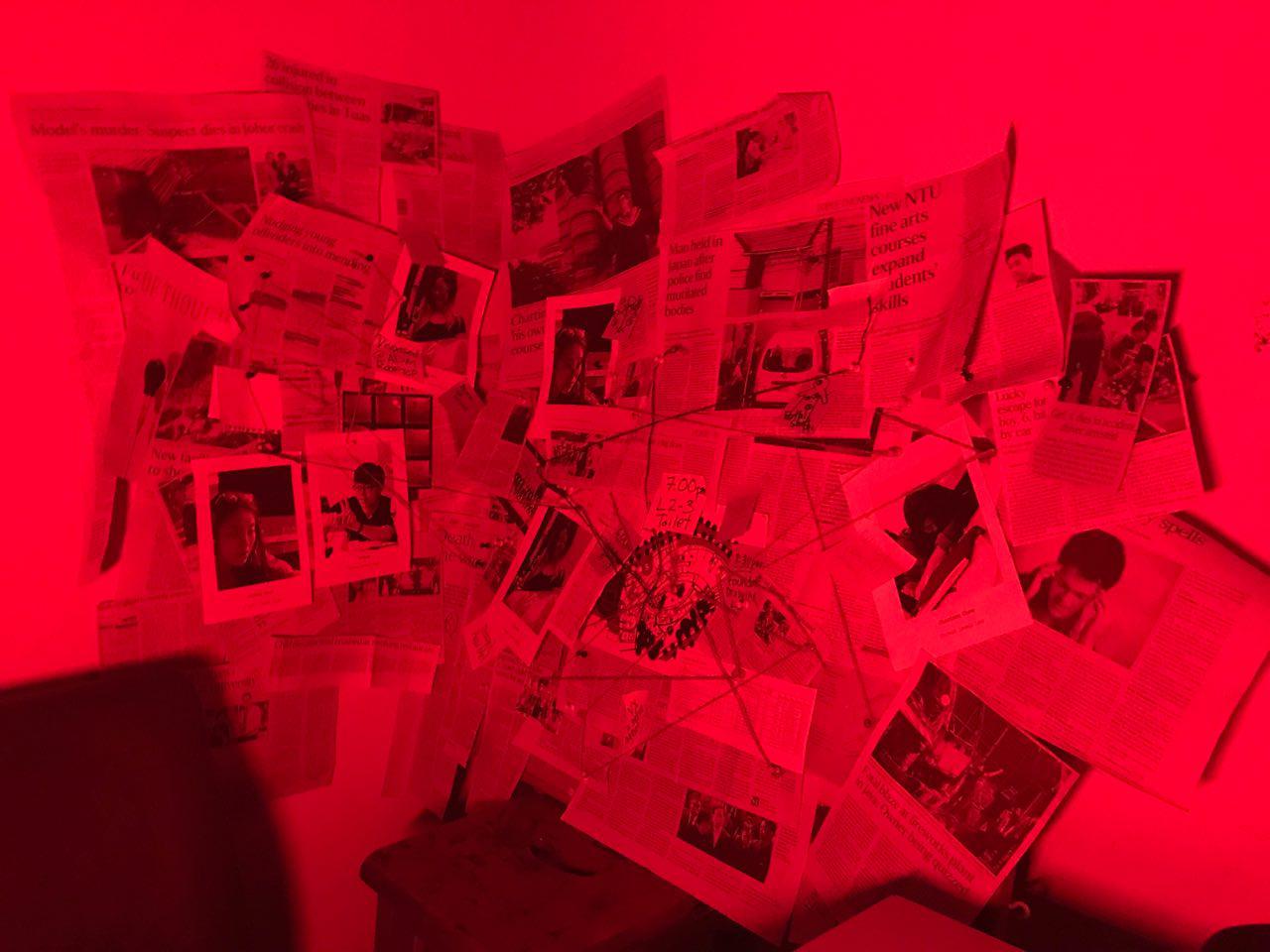 On the day before the submission, we set up the final conspiracy board: 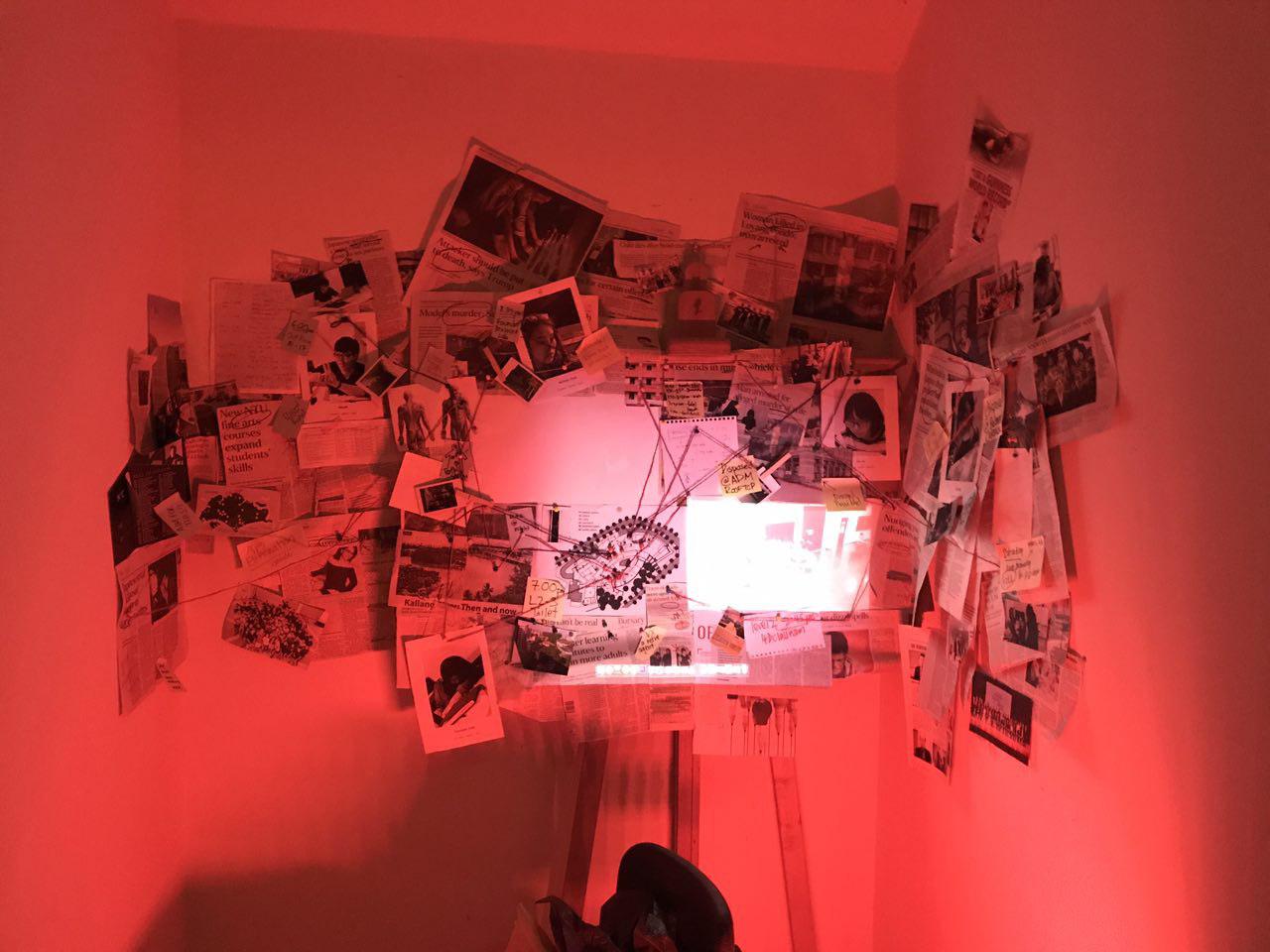 More Time lapses!! (This was us taking it down but we reversed it! Looks pretty legit right? I wish setting up the board was that simple…)

Now moving onto our final result!!!