Ikebana, one of the traditional arts of Japan, has been practiced for more than 600 years. It developed from the Buddhist ritual of offering flowers to the spirits of the dead. It is a form of Japanese art of flower arrangement. ‘Ike’, means alive/arrange and ‘bana’ means flower. (http://www.ikebanahq.org/whatis.php) 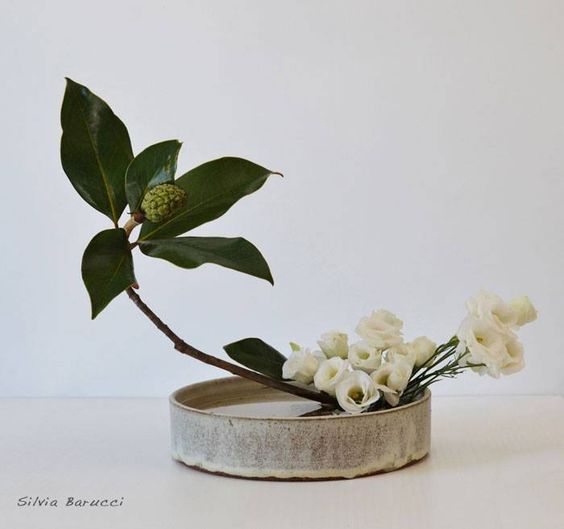 Most ikebana arrangements fall into one of three basic design categories,

Moribana is that they are arranged in a shallow vase or suiban, compote vessel, or basket..

Nageirebana is a non-structured design which led to the development of the seika or shoka style. It is characterized by a tight bundle of stems that form a triangular three-branched asymmetrical arrangement that was considered classic.

Heika (also known as shoka) is a basic style of ikebana arrangement that uses a tall vase and highlights vertical lines.. (https://www.thespruce.com/what-is-ikebana-1316134)

While balance and harmony are key to Japanese Ikebana, unlike Western floral design it eschews symmetry. Instead, the lack of symmetry is a distinct feature, carefully created to avoid any sense of disturbance. There is more to this in Japanese Ikebana than a simple absence of symmetry. There are degrees of asymmetry, and some people ascribe different levels of maturity or even spirituality to different forms of asymmetry. (https://www.zayahworld.com/the-beauty-of-japanese-ikebana/)

The taste buds are the foundation of every flavor you experience. Essentially, these are tiny biological structures that sit among the tongue’s papillae, or the tiny, rounded parts of the tongue.

Sour –– It is mostly acidic solutions like lemon juice or organic acids that taste sour. This sensation is caused by hydrogen ions, chemical symbol: H+, split off by an acid dissolved in a watery solution.

Sweet –– is usually caused by sugar and its derivatives such as fructose or lactose. But other types of substances can also activate the sensory cells that respond to sweetness.

Salty –– the chemical basis of this taste is salt crystal, which consists of sodium and chloride. Mineral salts like the salts of potassium or magnesium can also cause a sensation of saltiness.

Bitterness –– s a sharp, pungent, or disagreeable flavor. Bitterness is neither salty nor sour, but may at times accompany these flavor sensations. Compounds that have an alkaline pH, such as baking soda, often have a bitter flavor.

Umami –– Not very well known to all. It can present in a wide range of foods – anything that contains glutamates, including many fermented and aged foods. Having red meats such as beef, the more ages they are, the greater the levels of umami. 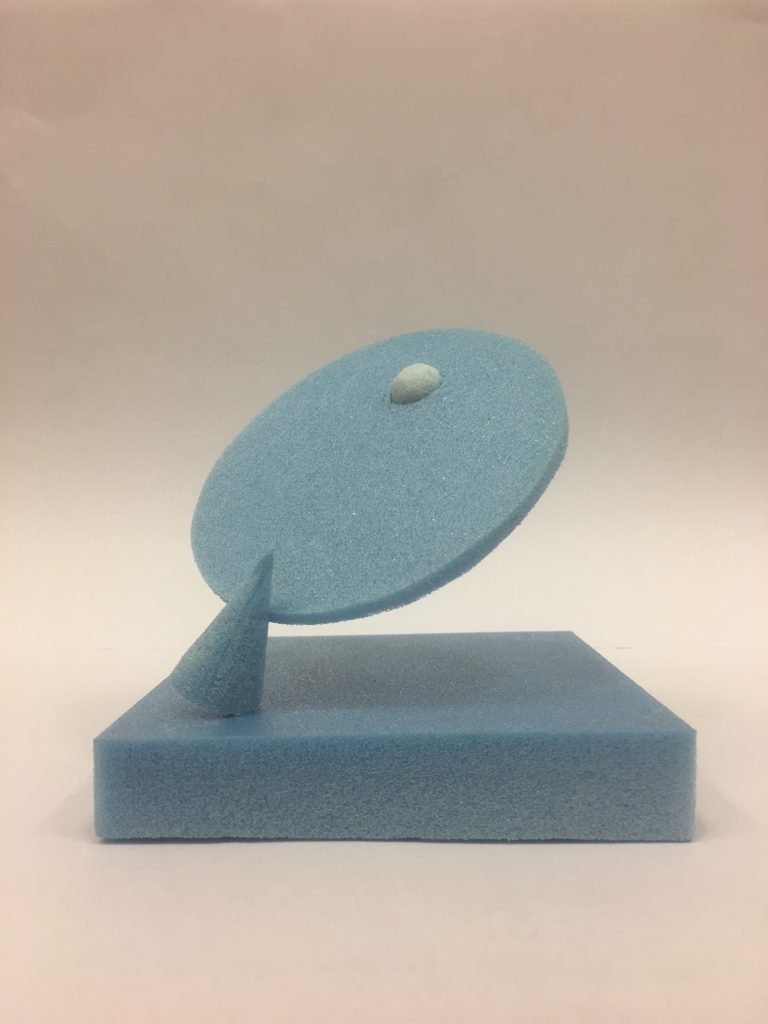 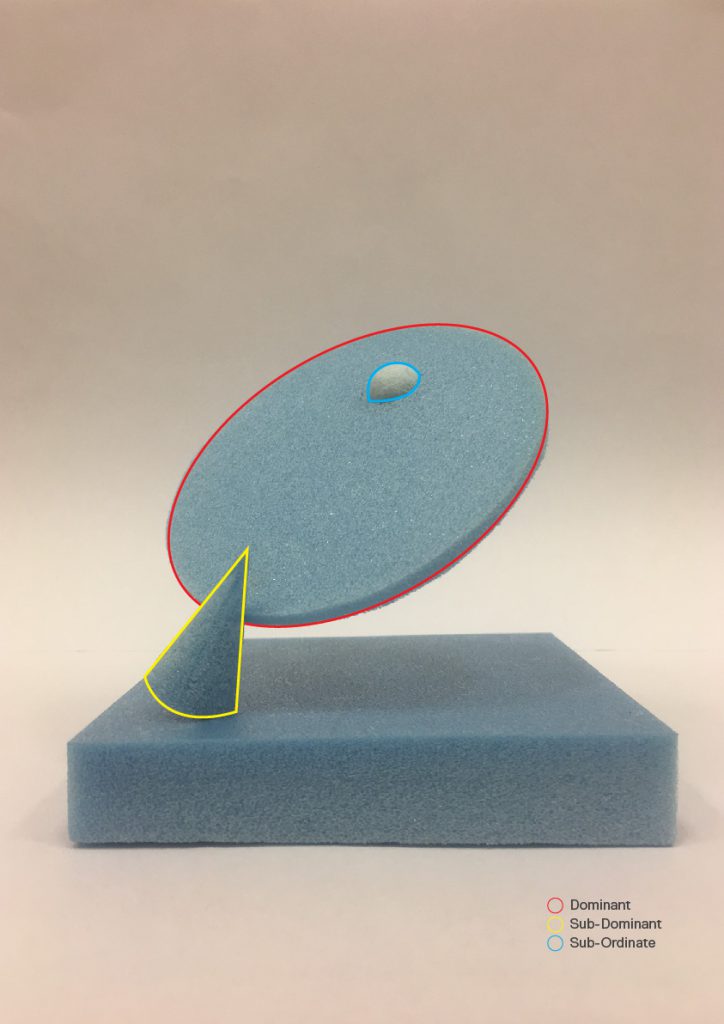 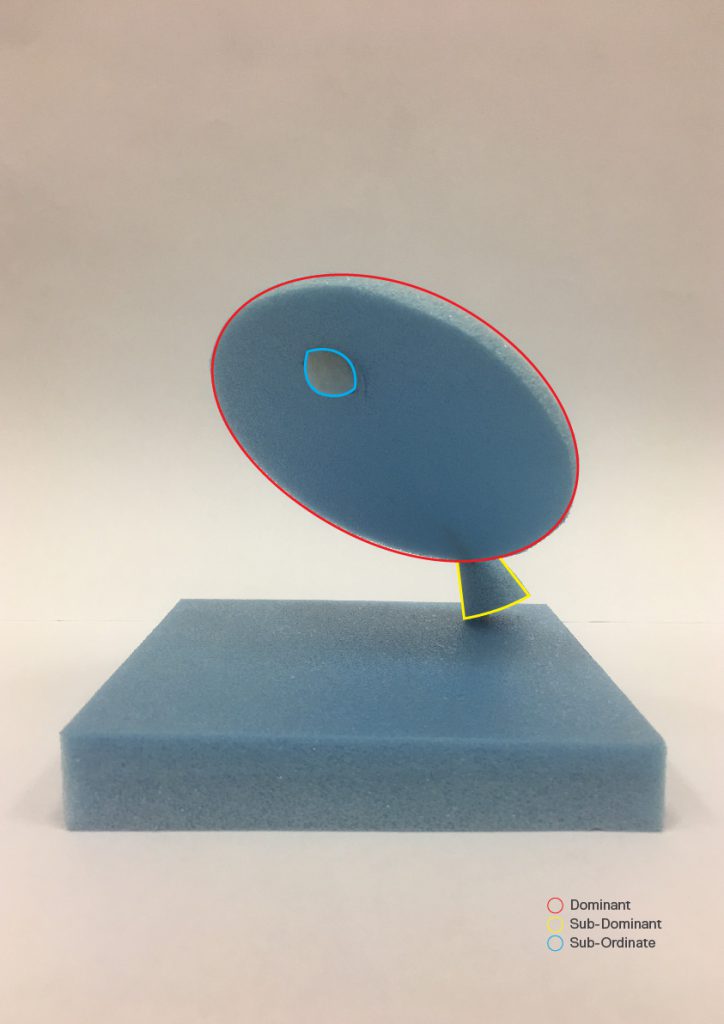 The cylinder being the dominant, wedged 1/3 onto the sub-dominant. The large void in between the dominant and the base makes the dominant levitate. The sphere being pierced through the dominant. 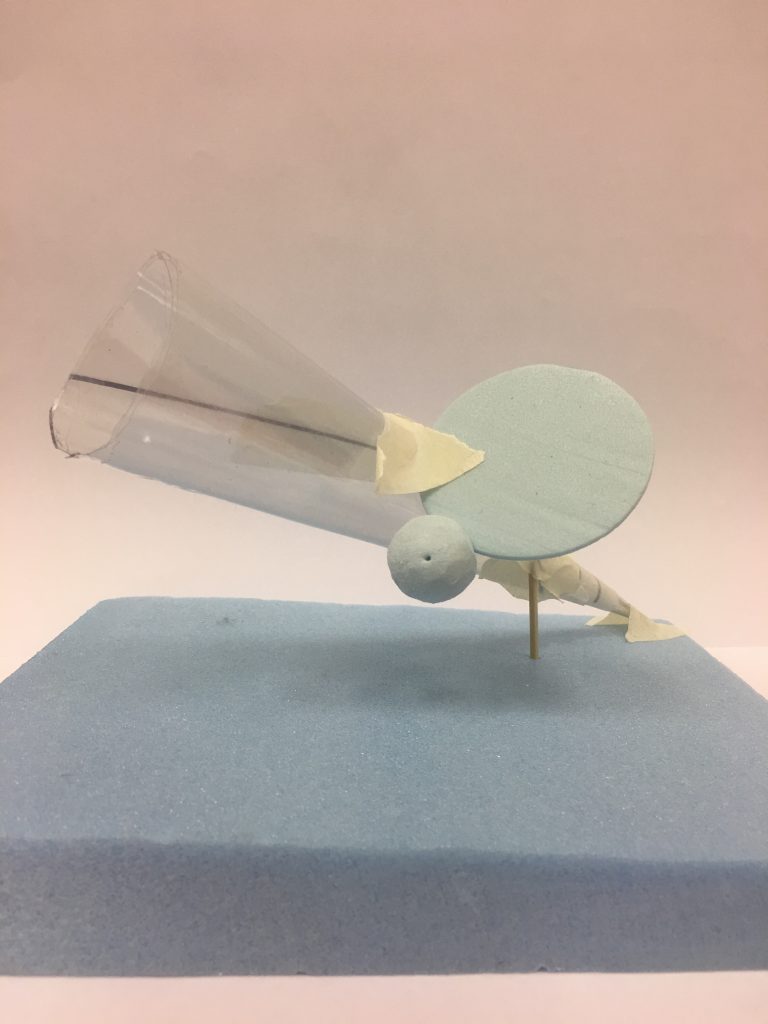 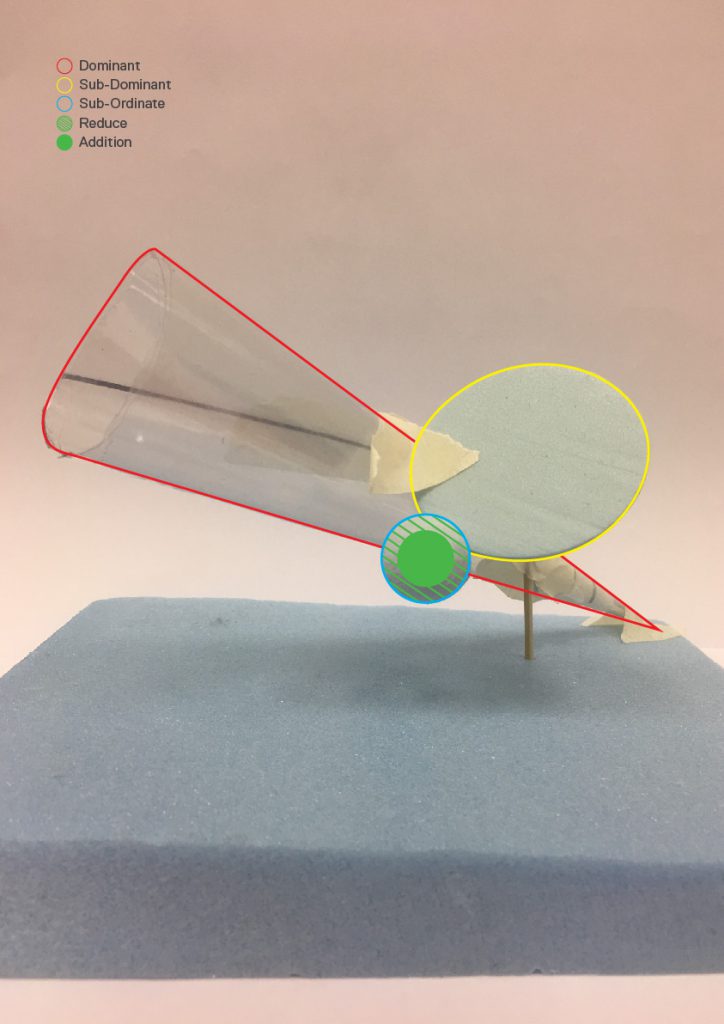 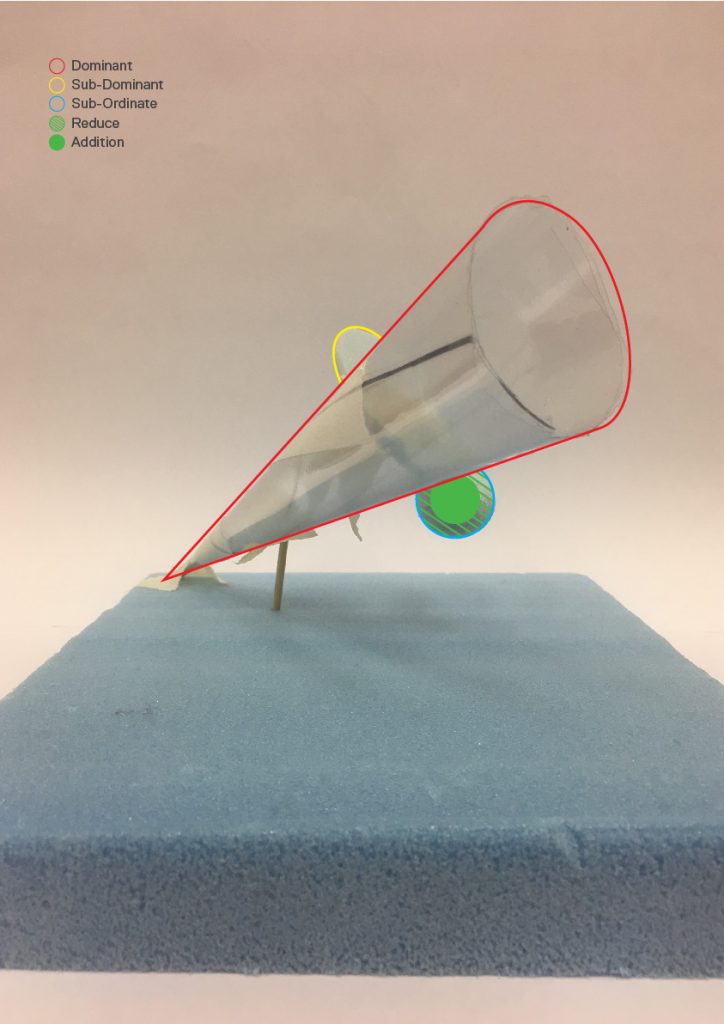 The sub-dominant being wedged on the dominant and the sub-ordinate wedged onto the sub-dominant. All of the 3 are facing in different axis hence making the model more interesting.

Things to improve on – is to reduce 30% the size of the sub-ordinate to have it more prominent when against the sub-dominant. 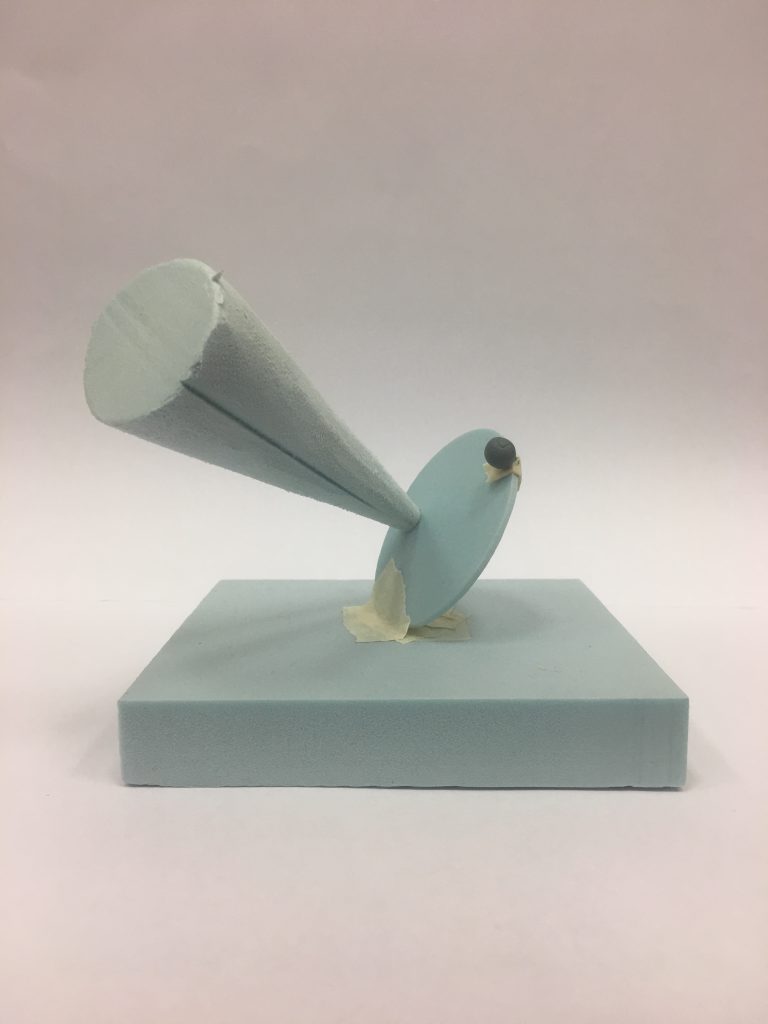 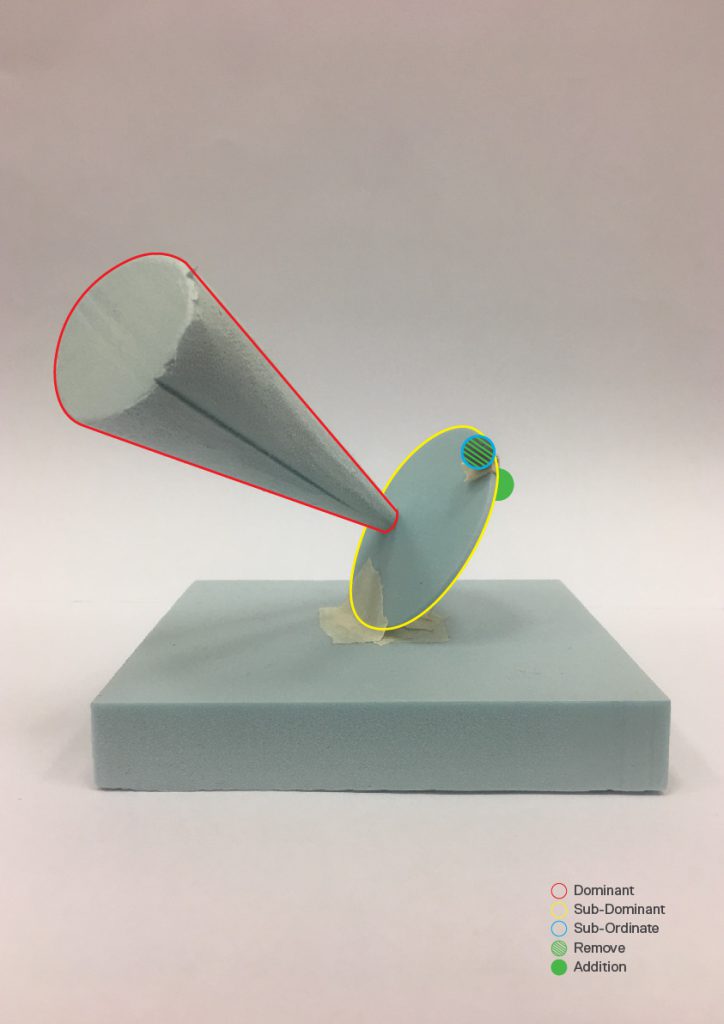 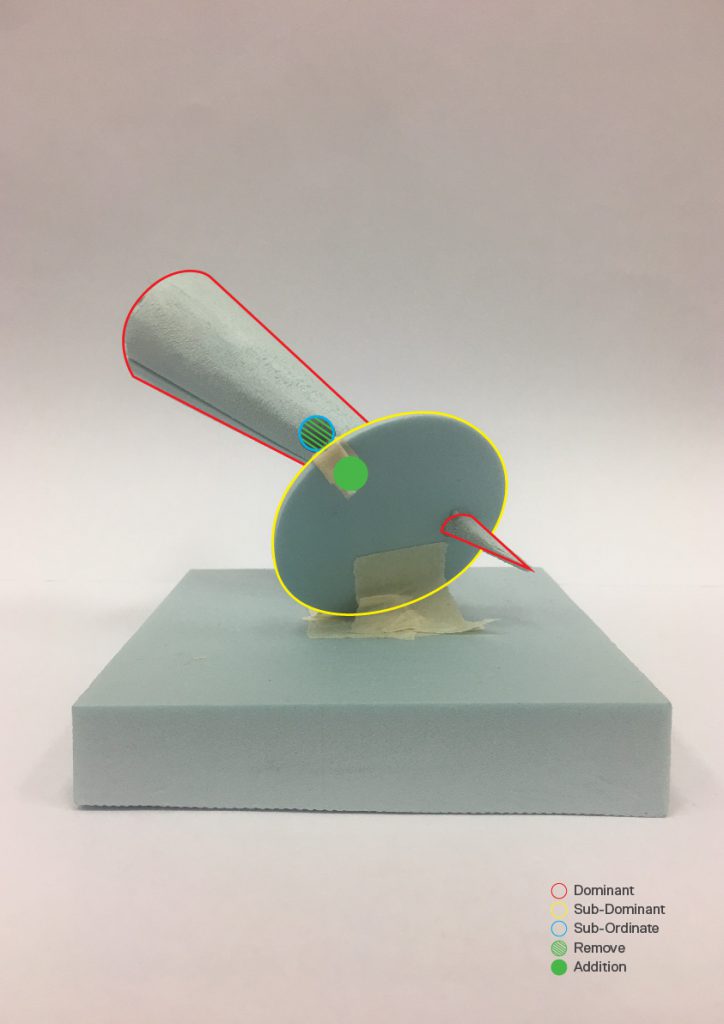 All the elements are visible in all views. The dominant being pierced through the sub-dominant. To make the model more interesting is to have the sub-dominant placed slightly higher than 45 degree. However the sub-ordinate is facing the same direction as the dominant.

Things to improve on – to pierce more of the dominant into the sub-dominant. To shift the sub-ordinate directly opposite to create more dynamics to the model.

The concept for the final model is to portray the birth of the new beginnings right after winter. 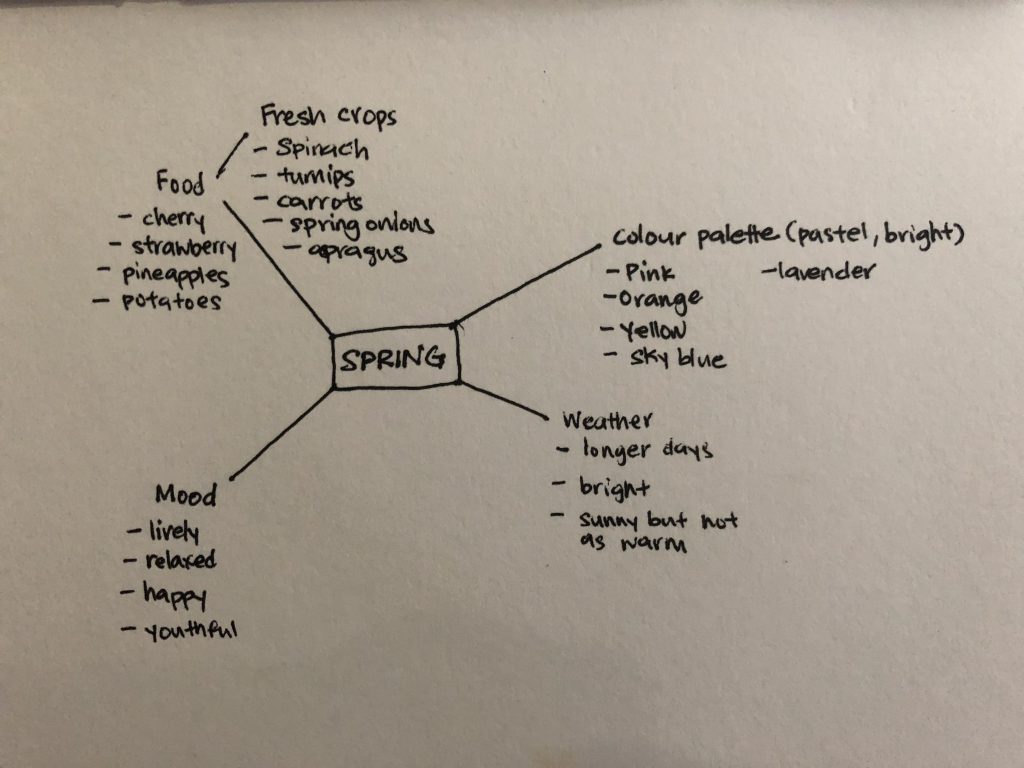 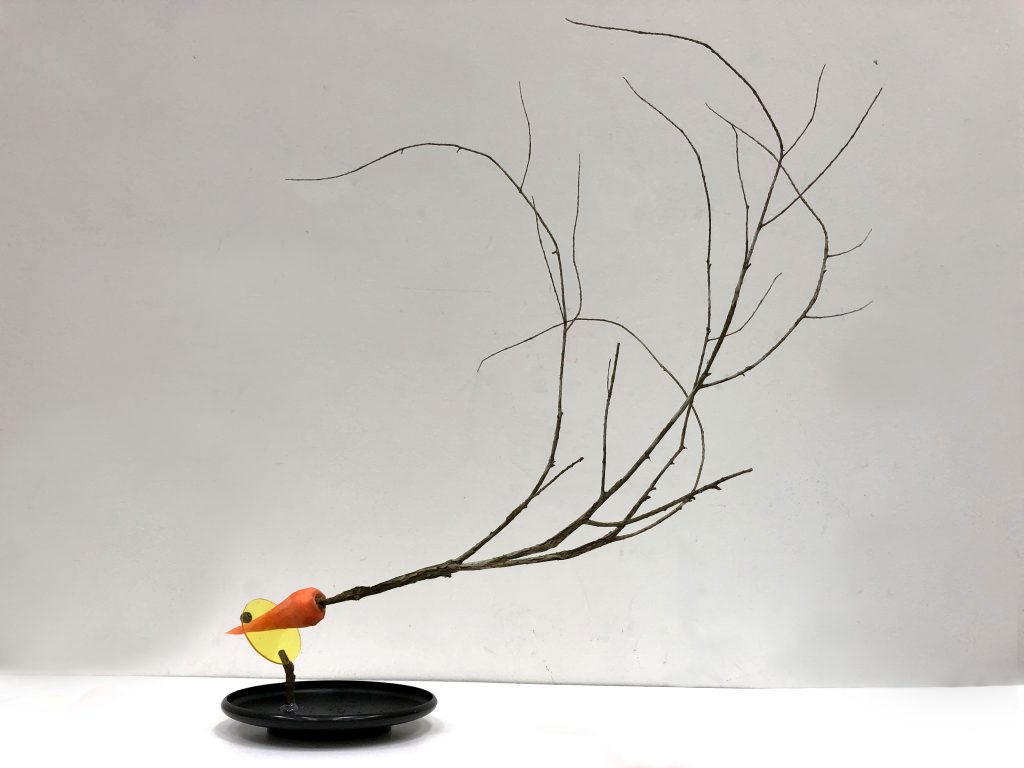 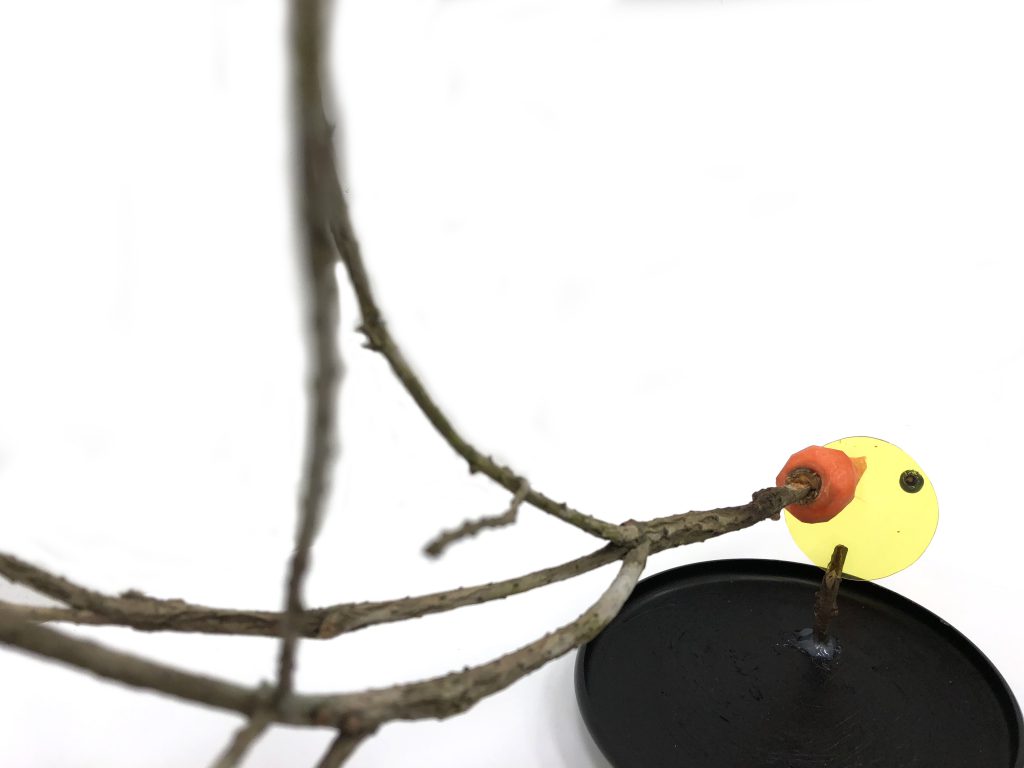 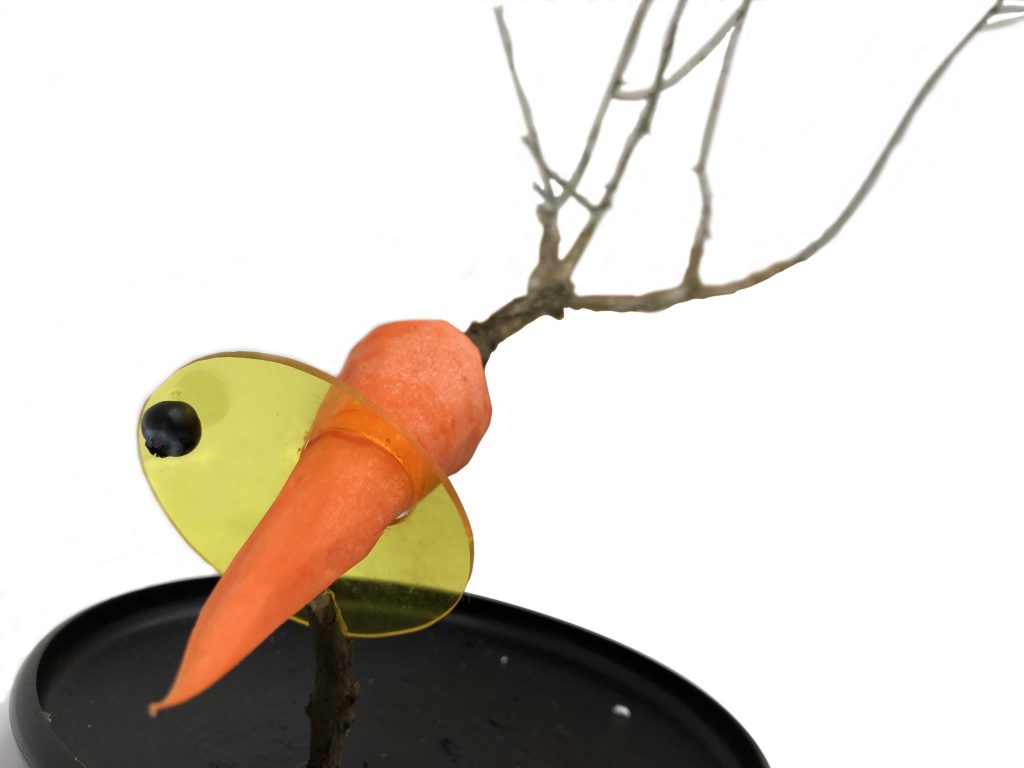 Sub-Dominant–Carrot, Yellow Acrylic (Two thirds of the carrot is being pierced through the acrylic)

The first thing came into my mind was cherry blossom when I thought of the season spring. Majority of the people might also thought of cherry blossom when thought of spring. So I have decided to go along the birth of the new beginnings which portrays the fresh harvest of spring. I chose yellow acrylic for my cylinder is to show the rising sun after the winter and the carrot is protruding out of the sun to show the growth of the fresh crops. The branch depicts the roots of the carrots therefore is being pierced into the carrot. The mass of the branch compared to the sub-dominants creates a levitation between the branch and the ground. The end of the branch curving inwards is to portray the cycle of the season.