Sound can include many things. some of which includes music kinetic sculpture instruments conceptual art sound effect and much more. Edgard Varese defines sound as all organize sounds. In a performance piece 443, he demonstrated that silence is also a sound. On the other hand, Paul DeMarinis argue that there are three parts to any sound recorded.The first sound is the sound that we try to record with a bit of distortion. The second sound refers to the sound of the environment. The third one refers to the whirring mechanics of the recording machine.

How has it been used in culture and society?

Sound art has been widely incorporated into the arts. by 1955 sound arts have almost become an art fad. It is widely adapted to music, kinetic sculptures, instruments played by the wind or the general public and more.  surface noise is often employed as the backdrop for continued attention and suspended belief. In the earlier times, the sound was used to create and emphasize on the silence.

Paul Dementist that that sound art has been loosely categories into the visual arts.  Similarly, as it lacks a purpose. I strongly believe that art has to have a purpose. Art is a reflection of reality. I feel that arts should offer a new perspective and probe the audience’s thoughts and feelings. Similarly, in traditional art, the meaning of the painting does not lie within the medium but on the subject matter of the work, unlike sound art where the medium of the meaning.

How does advancement in audio technology affect our sense?’

Advances in the audio technology allow us to normalise, compress and fill every moment with sounds. This results in us rejecting the silence, and the surface noise. This has resulted in many scholars opposing the classical and academical circles elevating silence to the highest pedestal in sound. This can be seen clearly in john cage 433, where he invited a musician to “play” a piano for 4 min and 33 seconds before leaving the stage. For John Cage, this is a composition of the varrying lenght of sielnce.

The first artwork that I chose is Electronic Superhighway by Nam Jun Paik. This is a 51 screen installation in the shape of the USA map.  Nam Jun Paik aims to explore the relation of mass media and how it affects humans. The 51 screen installation plays a different video on each screen. Paik speading up and slowing down the video, purposefully adding interruptions into the clip. This installation includes a jumble of sounds coming from the different video.

I do like this work a lot, and in fact, I think that the sound helps to further strengthen the message that Paik was trying to bring across. In this artwork, piak makes a statement about the huge amount of visual and auditory information we receive from the internet. the jarring jumble of sounds further confuses the viewers as they try to comprehend the imagery shown on the screens. Therefore I love how sound is incorporated into this piece.

The second artwork that I have chosen is Mona Hatoum Measure Of Distance. Measures of Distance is a video work comprising several layered elements. Letters written by Hatoum’s mother in Beirut to her daughter in London appear as Arabic text moving over the screen and are read aloud in English by Hatoum. The background images are slides of Hatoum’s mother in the shower, taken by the artist during a visit to Lebanon. Taped conversations in Arabic between mother and daughter, in which her mother speaks openly about her feelings, her sexuality and her husband’s objections to Hatoum’s intimate observation of her mother’s naked body are intercut with Hatoum’s voice in English reading the letters.

Similarly, I feel that the element of sound further solidifies the artist view of an outsider. The intimate video of her mother bathing is partially hidden by the Arabic script, however, the conversation is translated into English and played in the background. The sense of the viewers as the outsider is thus furthur emphasized as we should not be able to understand this conversation, thus making them the outsiders.

In this paper, Barthes aims to investigate the context of an image: how the image gets its meaning when does the interpretation stop, if there is anything beyond the meaning. He investigates this through categorizing the meaning of an image into three categories, the linguistic message, a coded iconic message and a non-coded iconic message. The linguistic message comes from the captions, labels, accompanying press articles, film dialogue, and comic strip balloons. This message can either be connoted or denoted. The coded iconic message comes from the pure image. To infer this message one needs to have a background cultural knowledge of the image. The third message, the uncoded iconic message is constituted by the object and its scene, the relationship between the code signified and the analogical representation.

All images are polysemous where the viewer is able to choose some and ignore the others. There are two functions of a linguistic message: anchorage and relay. An Anchorage text is a text, prone to multiple meaning. They direct the reader through the signified of image, causing him to read some and miss the others. This is one of the most frequent functions of a linguistic text and is commonly found in press photographs. where as relay texts and the image compliments each other, allowing the fragments of messages to be read at a higher level of unity. relay text can be often found in films.

Barthes also brought across the point that the coded nature of a drawing can be read at three levels. Firstly a set of rules that governs the transposition of an image (perspective). Secondly, the artist needs to divide the significant from the insignificant where he reproduce parts in details while omitting the rest. Thirdly, the drawing requires an apprenticeship.  In other words, the denotation of a drawing is less pure as compared to a picture. as the camera cannot alter the object while the artist is able to in a drawing.

I do agree with Roland Barthes point of view. An image has both the connoted and denoted signs. these signs complement each other to allow the viewer to read and understand the image better. However, I disagree with his point on the denotation of a drawing is less pure as compared to photograph. Despite having the freedom to alter the objects to fit in with the ideal standard in paintings, photography also has the ability to alter the object: Photoshop. Photographers are able to digitally manipulate to create an image that is equally unrealistic and heavily edited.

For example, Andreas Gursky digitally manipulated this image of a river into perfectly horizontal parallel planes of the land and the water body. Hence, I strongly disagree with Barthes point where denoted paintings are less pure as compared to photography. 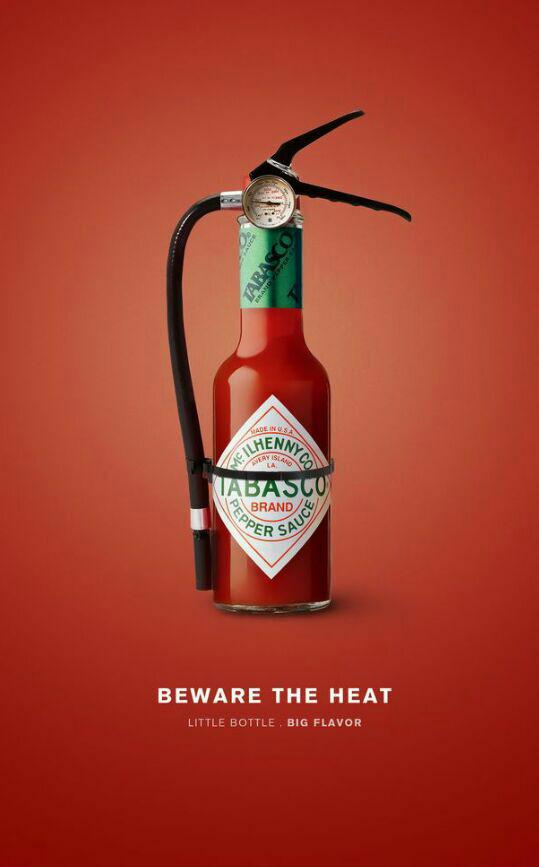 This is an advertisement for Tabasco Hot sauce. The literature message reads: “Beware the heat, little bottle, big flavor accompanies the text. The purpose of a fire extinguisher is to put out a fire. Taking away the literature message, A small bottle of Tabasco bottle can be seen placed against a red background with a fire extinguisher noose, the pure image. The imagery further solidifies the text saying “beware the heat”. This implies that the hot sauce is so spicy that literally a fire extinguisher is needed to put out the flames. The bigger text acts as an Anchorage text, guiding us in reading this message as the spiciness of the hot sauce ( focus is on the fire) instead of the hot sauce being cooling ( fire extinguisher extinguishing the fire). The smaller text: “little bottle, big flavor” acts as a relay text further reinforce the idea of the spiciness of this hot sauce.