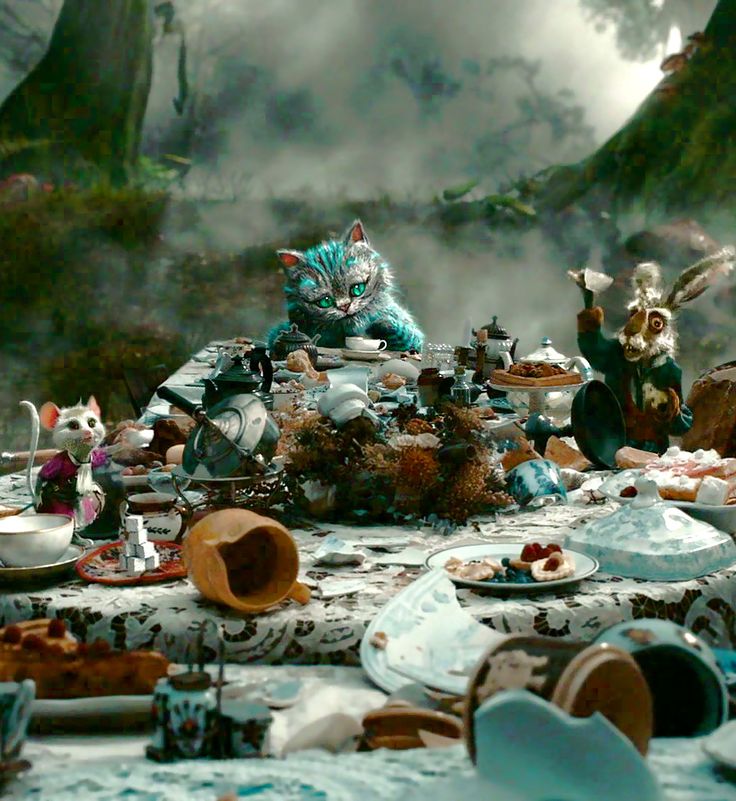 When I got this brief, I still cannot let go of the concept of Alice in Wonderland. My favorite portion of the movie was the tea party when Alice and the White Rabbit joined the March Hare and the Mad Hatter for tea. The paradox of this situation is that it’s always tea time for the Hatter and the March Hare.  this incident arises from when the Hatter tried to sing for the Queen of Hearts at a celebration of hers, she sentenced him to death for “murdering the time.” The Hatter escaped decapitation, but, angry about the Hatter’s attempted “murder”, Time halts himself in respect to the Hatter, keeping him and the March Hare stuck at 6:00 forever.  Hence my paradoxical strange world revolves around the theme of a tea party at odd timings.

I decided to explore with the various type of shots to aid in my composition. 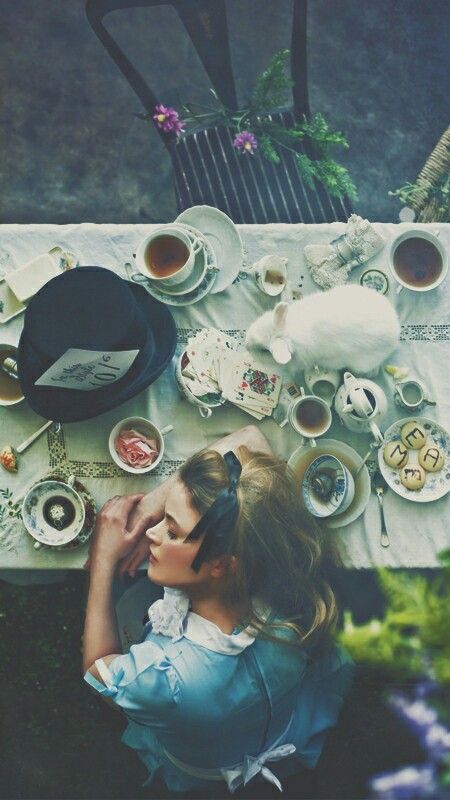 This is a close-up shot of Alice amidst the tea party. while I like the interesting and unusual perspective this composition brings about, I would be restricted in my image selection as there aren’t many images available online that features an aerial view.

This is a medium shot of a tea party. I like how the character’s emotion and the background are captured with equal detail. I also love how the scene portrays the paradoxical time of the tea party through the evening sky. 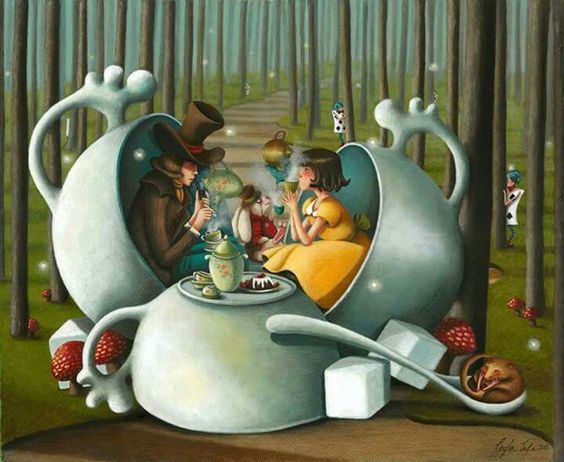 However, I decided to use a long shot as my composition in the end. I as the paradox isn’t on the character, but the background. This allows me to insert more details of the paradoxical setting into my composition.

Since it’s my Wonderland, I wanted to create a landscape that I would escape to as a kid. As there is a requirement to incorporate Singaporean elements inside my composition, I immediately thought of using childhood snacks and game that I often play. There has been many renditions of a landscape being made up of sweets and food. such include: Charlie and the Chocolate Factory, Hansel and Gretel.

Using this imagery in mind I begin creating my world. I used many iconic snacks and sweets from the 90s. of such includes the: White Rabbit Candy, gold chocolate coin, animal biscuit, ice gem and the tri-coloured biscuit wafer. I also included some iconic games such as the styrofoam airplane and the five stones in the back ground. To make the scene more paradoxical, I decided to incorporate my Mad Hatter character from the previous assignment, by making him serve me tea through his head. I also manipulated with the scale to make my setting more paradoxical. The various food dwarf over me, thus questing the subconsciousness of the viewer. In addition, I swapped out the usual tables and chairs for a teapot. Thus further adding to the strangeness of this world. So as to establish an odd timing I decided to use a bright pink sky as the background. The strange and bizarre color of the sky questions a sense of reality and timing in the composition. The moon in the top right hand Conner further emphasizes the apparent lack of time in this composition. 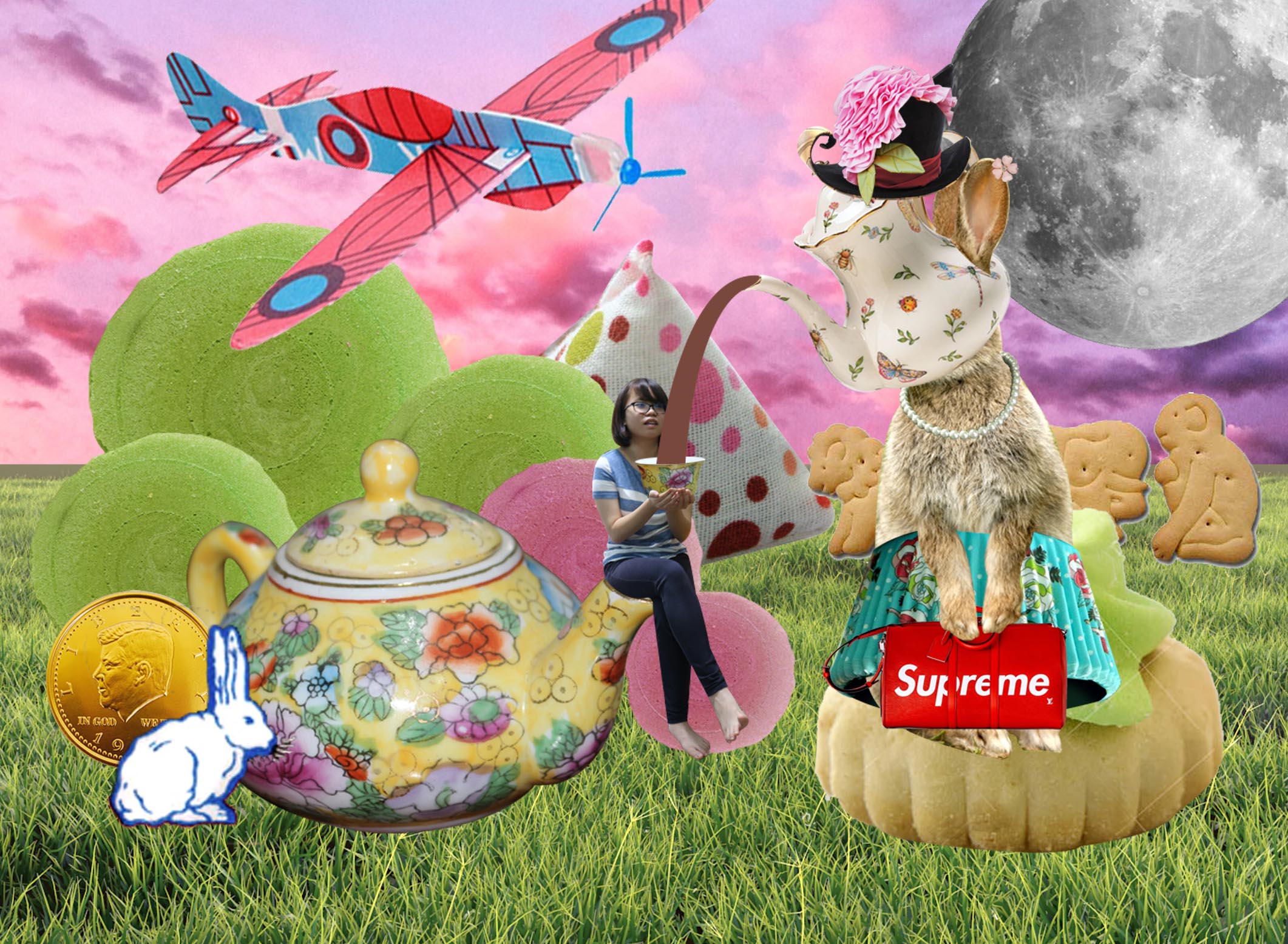 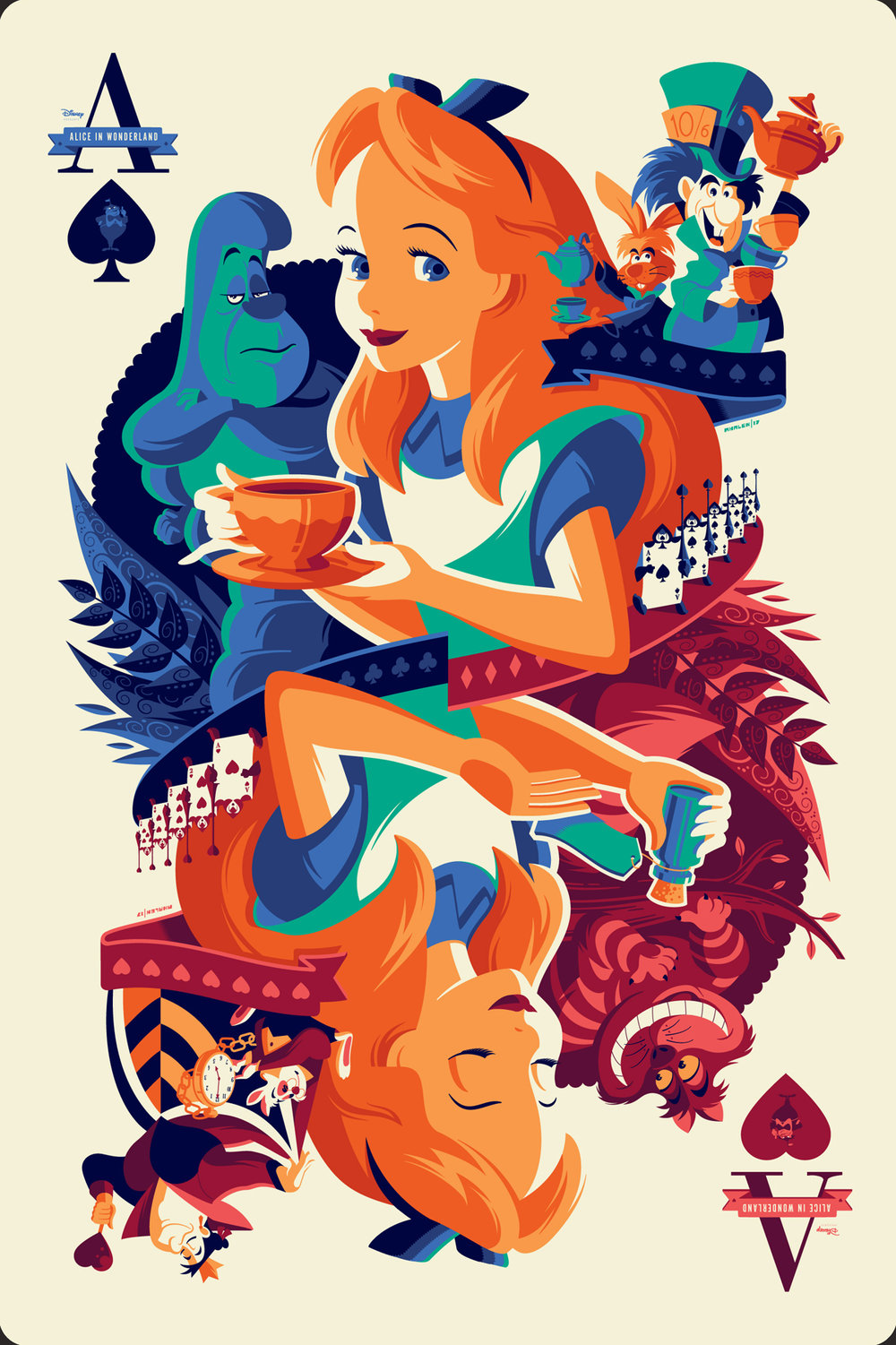 For this project, I will be exploring 4 of my favourite Characters, The Chesire Cat, The Queen, The White Rabbit and the Mad Hatter.

Both Disney and Burton portrayed the Cheshire cat similarly. Both were a cryptic and mysterious cat, who pointed Alice in the right direction when in need. Both Stylised the character with a cheeky wide smile which disappears from time to time.

While in Disney and Burton film the cats are portrayed with cuteness, in the video game, the Cheshire cat is portrayed with a more sinister vibe. It has protruding bones, angular body structure, with multiple tribal signs over his body.

To make my character unique, I decided to take the most distinctive traits of each character and appropriate it into the everyday Singaporeans. For the Cheshire cat, I decided to focus on his cheeky personality. The Chesire cat reminds me of that one particular prankster we all had in class. I decided to use a black cat as my base. I chose the colour black specifically because they are commonly associated as a familiar of a witch. Hence bring on the connotation of it being magical and unordinary. I also decided to give it a fox head to depict his sly and cheeky nature. As the Cheshire cat always gives advice out in a cryptic riddle, the advice can go both ways either good or bad depending on the reader interpretation. Hence I decided to give him a snake for his tail to symbolise that the Chesire cat may not always be good and may backstab you sometimes. As a homage to the Cheshire cat’s ability to turn invisible, I erased half of my character’s body.

However, the character did not fit in with my other three characters so I decided to scrape him away.

The Queen of Hearts

Both Disney and Burton Strongly used the motif of a heart in their films. The Queen of Hearts is often seen as a hard headed woman, dictating her soldiers and issuing out ridiculous orders. In Burton’s rendition, the motive of the heart can be seen clearly in the form of her hair and the red lip stick. I love the way Burton manipulated the proportions of this character. The Queen of Hearts is given a rather large head and a tiny body. This further emphasises the irrational quality of the Queen of Hearts.

Similarly, I envision The Queen’s personality fitting a dictator, a judge, a prosecutor the best. Her stubborn persona reminded me of a prosecutor who is bounded by countless laws. I decided to use a white cat as a base, as they have a very pristine and regal look. especially the picture that I have chosen, the cat glances away from the viewers as if their presence isn’t worth her attention. So as to emphasize her royalty, I decided to place her on a plush velvet cushion. however, I couldn’t find one online that is in the right perspective hence I decided to use a fondant cake decoration instead. Secondly, as the Queen favourite line is: ” Off with her head!” I decided to “behead” the cat. In addition, this solidifies my point of the bureaucracy being headless as money, bribery is able to influence a case in someone’s favour.  I also gave the cat a judges wig to symbolise her position as a prosecutor.

I wanted to replace the head of the cat with famous dictators such as Hitler, Chairman Mao and Kim Jong Un, however, I couldn’t find pictures of these leaders in a correct angle and I was afraid it was “politically incorrect”.

“As Mad as a hatter!” was a phrase popularised by the infamous mad hatter. Both Disney and Burton portrayed the character as an eccentric man, with terrible temper and mood swings. The mad hatter absolutely loves his tea and has a great taste in hats. in the Disney animation, the quirky characters of the Hatter were brought out by his actions and his fluffy hair style. whereas in Burtons film they used makeup to emphasize his eccentric behaviour. counter that is done in pink, unnaturally bright and fluffy hair and eyebrows are just a few.

instead of focusing on the personality of the Hatter, I decided to focus on what the Hatter likes: Fashion, hats and tea. Hence the idea of tea party became my main motive of this piece. Then I thought, who in Singapore has the time to enjoy all these frivolous activities? Rich Tai Tai. Hence the base personality of this character is rich ladies. I choose to use an image of a bunny as the base character as a homage to the Hatter’s dear and equally mad friend: the March Hare. Using the motif of a tea party, I replaced the head of the rabbit with a fine china teapot and gave her a skirt of a cupcake liner. I then, added more jewellery to the character to further emphasize her standing as a rich lady ( pearl necklace, red LV bag and the ebony earrings)

The White Rabbit, the main culprit that brought Alice down the rabbit hole. In the Disney film, the White Rabbit is portrayed as a two face character, that alternates back and forth a pompous behaviour toward his underlings and a sickening grovelling behaviour towards his superiors. However, in Burton’s film, the white rabbit is portrayed as a skittish character, who works undercover against the Queen of Hearts to assist Alice in his adventures. Both films used a common motive of a clock. The White Rabbit is often seen fervently checking his pocket watch and lamenting about the lack of time. A popular quote by the White rabbit is: ” I am late, I am Late! for a very important date, no time to say hello, no time to say goodbye. I am late, I am late!”

I felt that the personality of a disgruntled office worker is exactly the same as the White Rabbit. Both are equally pressed for time, rushing datelines and adding extra hours. I also like how both the White Rabbit two face personality fits in perfectly with a disgruntled worker: boot licking and complimenting their supervisors and abusing the poor intern. I decided to use a mouse with both hands up to show how skittish and easily swayed this character is. I gave him a pocket watch as his face to show how to obsess he is with time. I gave the mouse a tie and a black brief case to solidify his role as an office worker. 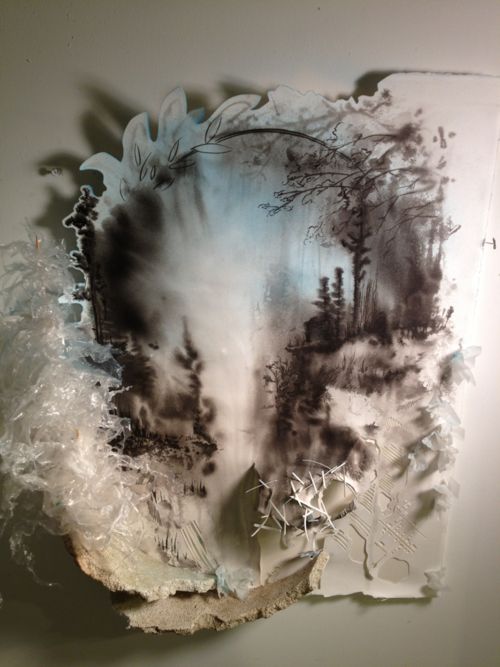 This art work is done by Jacques Villeglé, a French artist, best known for his torn collaged works. Jacques would paste multiple layers of posters and advertisments he has collected from the streets onto his canvas, before tearing away the layers to reveal a decollage artwork. In this artwork the torn posters reveals a man face in the middle. The deep set gaze of the man captures the viewer’s attention in a glance. Furthermore, the textured surface of the collage almost allows us to sense the artist feeling and thoughts as he completes this work. Jacques destabilizes our perception through the quick and abrupt changes in the imagery. This bombard of imagery and information, leaves the viewer questioning the source and the intention of the poster.

This artwork is by Gregory Euclide, an American contemporary artist, who draws inspiration from the rich and diverse wildlife around him. Euclide contrast the organic form of nature with the harsh and geomatic shapes of the   triangular structures. Euclide distorts our perception of depth as he intwines the two-dimensional paintings with his three-dimensional relief paintings.  His adept use of chiaroscuro further solidify the illusion of realism in the paintings as seen in the trees.