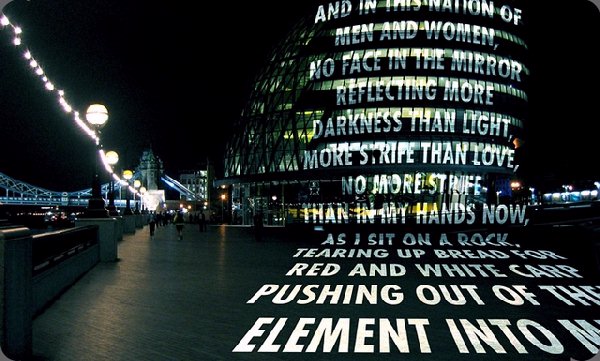 Jenny Holzer’s please change believes, is a work base on the world wide web, where she invites the audiences to contribute and change the given truism. Her body of work focuses on the delivery of words and ideas in public spaces. These short truisms are very direct and are very obvious for us.  However, by inviting the viewers to change the truism, it forces the viewers to pause and think about the statements and their experiences. 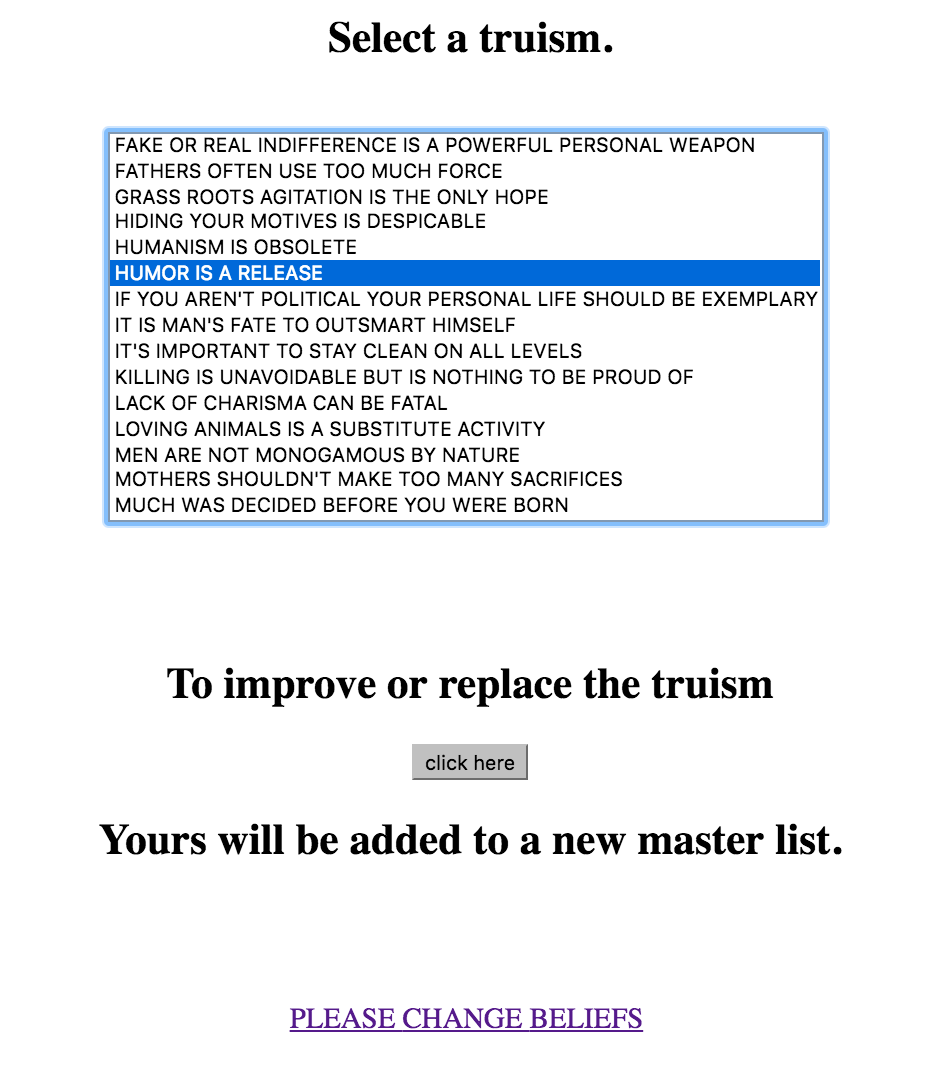 This decentralization of authorship, location, and narrative foreshadows the nonhierarchical and nonsequential forms of interactive and networked media that expand and realign the boundaries of time, space, viewer, and artist to create new kinds of collective experience and social engagement. – Randall Packer

Open source has truly allowed artworks to transcend time and space. Through the use of the world wide web, images or information of art works can be accessed anytime and anywhere. People no longer need to travel to museum or gallery to view the art works. Similarly, in Holzer’s work, the internet allows viewers interact and contribute to the artwork regardless of the location or the time difference.

I especially love the use of truisms. Truism are so relatable to everyone, regardless of their culture or education level as it is a common experience. However, by allowing the viewers to edit and change the base statement, it widens the perspective and scope of the artwork. Some experiences are unique to each culture or through personal experiences . The sharing of this tidbits of information widens the scope and depth of the artwork. 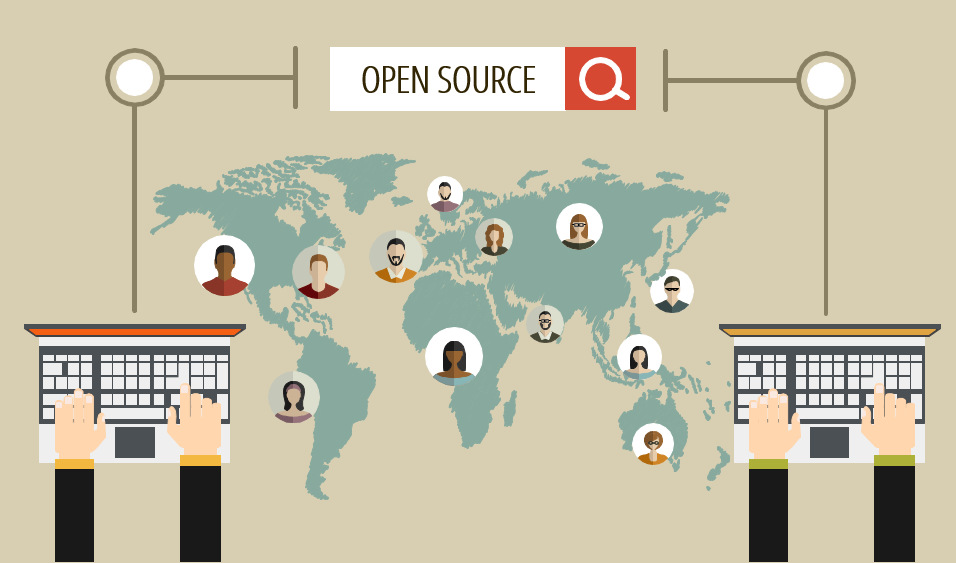 Before I start rambling on the readings here is a video summarizing the concept of open source:

Like the name suggests. open source is a open platform facilatating the exchange,appropriation, collaboration, contribution, amplify, information and methodology among artist and even with the audience.

Unlike the traditional proprietary of artist creation, where its a one way conversion of the artist to the audience, (such as a painting exhibition) the peer to peer social interaction in open source has triggered for greater engagement between the artist and the audience, through a greater distribution. The facilitation of the exchange of information with people with the right skill sets allowed for better development of programs.

open source has also change copyrights. copyrights initially functioned as a form of incentive to encourage innovation. however with intellectual property rights, it has stifled developments, evident in the free software developed by a concerned  community exchanging and information along with their skills. open source has fostered the common consensus that copy right is not a single entity granted to a part, but multiple rights that the party license, allowing for changes and improvement.

Open source has greatly changed the way the interaction of the artist and the audiences. In the traditional setting of a museum, there is minimal interaction of the audience, and the artist. however, with open source, the audience now play an essential role in the artist artwork. Many performance pieces are solely dependent on the audience interaction. one example is Rhythm 0 by the Serbian artist Marina Abramovic. For a period of six hours, visitors were invited to use any of the 62 objects (ranging from harmless like a feather to a gun) on the table on the artist, who subjected herself to their treatment. where is test the reaction of the public to a the objectification of herself as compared to a human being. without the participation of the audience, the artwork would not been possible for Abramovic to execute herself, or uncover her aims.

in conclusion, open source has moved the work of a creator, from a individual to a collective social act. drawing influences, information from a diverse source.

In my opinion, open source has already become an intrinsic  part of our lives. This is evident through the avid use of google docs for note taking among students in lecture. Our number one source of information (as unreliable as it is); Wikipedia also acts as an open source, inviting the public to edit and update pages. Have a problem that you can’t solve? Ask google. In a nutshell the the Do-It-With-Others concept isn’t as alien as we think, after all it has been seamlessly incorporated into our lives.